Stigma and Mental Health in Brazil

How might individuals undergoing treatment for substance use disorder internalize the cultural model of substance misuse risk and employ it to recognize social stigma and, possibly, to self-stigmatize?

“Everyone, this is Nicole. She’s here to do research and she would like to talk to you. Would anyone be interested in talking to her?” This is how I was introduced to a large group of patients at one of the addiction clinics where I would be conducting my dissertation fieldwork in Brazil. I stood next to the nurse, smiling and internally deliberating about what I could say to convince these middle-aged men that they should talk to me. Before I could speak, a man to my right grunted, “Why not? No one else wants to talk to us.”

Stigma is frequently studied in relation to mental health; it has been identified as a barrier to employment, housing, social relationships, and medical treatment (Link and Phelan 2001). Moreover, when people internalize stigma, or begin to stigmatize themselves, their self-esteem, self-efficacy, and confidence in the future suffer (see for example Corrigan 1999; Holmes and River 1999). Indeed, it could be argued that the effects of stigma are as harmful for substance users as are the substances themselves.

Many ethnographies of drug use have keenly demonstrated the social suffering endured by substance users (e.g., Bourgois and Schonberg 2009), and anthropologists have documented the variation within the assumed uniformity of experiences of stigma (Jenkins and Carpenter-Song 2008). Yet, despite calls for a “comprehensive view of the socio-psychological and cultural dynamics of stigmatization” (Kirmayer 1989, 333), we know little about the processes that underlie the attribution and internalization of stigma. Substantially less data regarding public attitudes towards substance use disorders are available than for other mental illnesses (Barry et al. 2014), and those that exist continuously refer to the essentialist narrative of “moral deviance” to explain stigma (Pescosolido 2013). 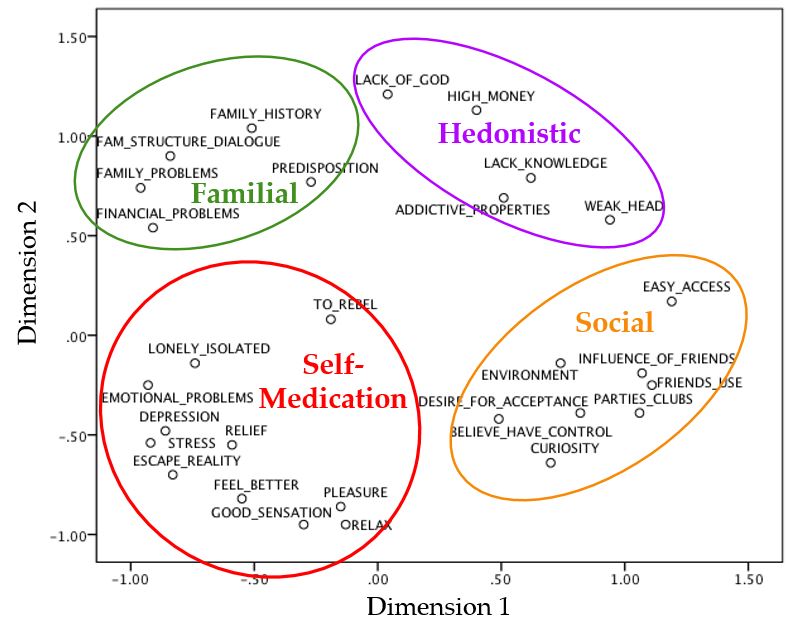 Cultural conceptions of disease risk, which provide meaning to an illness event and guide how people respond to personal and others’ experiences (Kleinman 1980), could be particularly important in this case. Few have attempted to connect these cultural belief systems to stigma due to the lack of methodological specificity required to identify and target cultural beliefs (Link et al. 1999). Link and colleagues presented respondents with vignettes depicting various types of mental illness (including alcohol and cocaine dependence) and asked if the mental illness was caused by a chemical imbalance, genetics, stress, an individual’s upbringing, bad character, or divine will. Martin and coworkers (2000) then found that individuals who endorsed genetics and stress as causes of mental illness were more likely to feel comfortable in close social interaction with someone with mental illness.Yet notably these studies did not capture the full range of extant popular beliefs and greatly simplified respondents’ understandings of disease risk to the selection of a single risk factor.

My research has developed to address this lacuna in our understanding of stigma. My master’s research shows that, at least in the United States, the stereotype of substance users as morally weak and deviant, and hence “deserving” to be marked with the spoiled identity that defines stigma (Goffman 1963) is an oversimplification. Instead, there is a gradient of rationales regarding the perceived causes of substance misuse that ranges from those who view risk in moral terms to those who view risk as resulting from medical factors (Henderson and Dressler 2017; 2019a). And, where the individual falls on that spectrum directly influences the degree to which they stigmatize individuals with substance use disorders.

My dissertation research has extended this investigation in two ways: First, I investigate how knowledge of risk varies across different societies by introducing a field site in Brazil, a country with a large and growing epidemic of substance dependency. Second, in addition to the study of culture and stigma in the general population, I examine how cultural factors may lead to internalized stigma among patients receiving treatment for substance dependence.

The first and second phases of my dissertation research focused on the construction of a cultural model of substance misuse risk and the operationalization of variation in community members’ knowledge of this model to predict attributional stigma. Sixteen freelisting interviews were conducted to identify culturally important risk factors associated with substance use or misuse and 45 individuals participated in a pile-sorting exercise where they grouped the risk factors according to perceived similarity. Analyses revealed that the cultural model consisted of 29 risk factors that spanned four causal types: Familial, self-medication, social, and hedonistic. Forty-eight individuals then rated each factor in terms of its degree of influence in the ultimate development of a substance dependency. Persons who emphasized the risk associated with self-medication or familial stressors (the medical perspective) were more likely to stigmatize the user, while persons who saw substance use as principally a social experience (the moral perspective) were less likely to stigmatize the user (Henderson and Dressler 2019b).

In the third phase, focus shifted to individuals receiving treatment for substance dependence in two types of intervention and treatment services in Ribeirão Preto. Comunidades terapêuticas (CTs or “therapeutic communities”) are intensive in-patient programs where individuals live and work on farms located on the outskirts of the city. Patients stay at the CT for anywhere between three and nine months, participating in daily religious activities and receiving weekly visits from psychologists and other health professionals. While these programs tend to be highly specialized in that they cater to specific portions of the drug using populations (e.g., extremely religious individuals), CAPS-ad (Psychosocial Treatment Center for Alcohol and Drugs) crosscuts demographic categories to reach the broad spectrum of substance users, as it is a part of the national health system and therefore free to use. The center utilizes a team of psychiatrists, psychologists, nurses, social workers, and occupational therapists to offer a continuum of care for patients and has become the near universal first stop for addiction treatment in the city.

A graph plots the attributed stigma related to social/hedonistic and psychofamilial risk factors. The x-axis is labeled with Social/Hedonistic and Psychofamilial. The y-axis is labeled “Attributed Stigma: Dangerousness” and the measurements begin at -1.20 and increase to 0.60 in 0.30 increments. The bar representing social/hedonistic stretches from -1.20 to just above -0.30, centered near -0.60. The bar representing psychofamilial stretches from just below 0.00 to 0.60, centered near 0.30.
Credit: Nikki Henderson 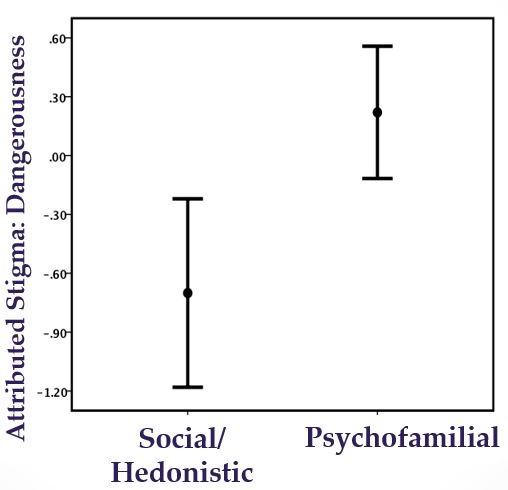 This phase of the project was concerned with the various ways that the cultural model of substance misuse risk has been internalized by individuals undergoing treatment for substance use disorder and then employed to recognize social stigma and, possibly, to stigmatize oneself. I conducted 141 interviews with patients in two different (one catholic and one evangelical) CTs and the CAPS-ad located in Ribeirão Preto. The interviews began with basic demographic questions and a discussion of the individual’s personal experience with the initiation and continuation of alcohol or drug use. The interview then moved to a more structured collection of information, including a stressful life events scale, cultural consonance in Brazilian lifestyle or family life, and a measure of depressive symptoms (CES-D). Individuals were also asked to rate each of the factors in the cultural model of substance misuse risk on a four-point Likert scale in terms of the degree to which they believe it influences the development of a dependence on drugs or alcohol. Finally, perceived stigma and internalized stigma were measured separately, as each provide insight into the complex process of stigmatization by addressing the inherent interactional and personal aspects of stigma.

The data from this final phase of the study are still in the process of being analyzed, however, a few early conclusions can be drawn. Unlike community members, who rated the risk factors according to causal types (alternatively emphasizing either a medical or a moral perspective), patients organized their thinking around a unique subset of risk factors that emphasized aspects of one’s social and familial environment, comorbid mental health problems or stressors, and the addictive properties of substances. In other words, patients generated distinctive configurations of the risk factors most important to them. While students had neat, cognitive boxes for the varying types of risk factors and judged substance users based on the perceived importance of those categories, patients recognized that risk is rarely one-dimensional. Risk factors were discussed and rated in pragmatic terms, with consideration given to the context that substance use occurs. I suggest that the patients’ unique configuration results from the intersection of the general cultural model with their personal experience as substance users, especially as results also demonstrate that the more that individuals interpreted substance use in terms of this patient-specific configuration of stressors, the more likely they were to self-stigmatize

Nikki Henderson is a PhD candidate in biocultural medical anthropology at the University of Alabama.