1. Focusing one’s ears. Ways of listening that align most closely with the colloquial use of the English verb “to listen” as a mode of auditory attention. Listening as a mode of earful attention comprises innumerable listening practices: for example, listening to what someone says, how they say it, and the qualities of its sonic utterance. These ways of listening are not just for discursive or musical content, but for sonic textures and qualities and affects; they acknowledge the ways coming to know is not independent of the material ways in which (auditory) knowledge is acquired. It was my Ugandan colleague Opiyo’s insight that “some things don’t translate when written” that first directed my earful attention to Gulu’s sounded worlds.

Usually called interruptions or disturbances or noise—sounds some would rather tune out—these encounters are also sites of listening. Attuning to moments when sound captures one’s (unwilling) attention opens consideration of the limits to human autonomy and agentiveness, which doubles as an invitation to curiosity. Such distractions draw a listener’s attention toward a sound event, often evoking irked thoughts and feelings as they do. These encounters may also be pleasurable, such as buskers playing music on the way to catch the subway or, as I’m writing this, the enchanting “choo chooooo” of a passing train. Like it or not, these sonic encounters are reminders that we humans are caught up in each other’s lives and in a more-than-human world.

3. Tacitly. Ways of listening for the unspoken relations that structure how one hears what one hears. Tacit listening denaturalizes the often unnoticed or biased ways people attune to or tune out sound, such as listening that hears low timbral qualities as authoritative because associated with masculinity or that hears former President Barack Obama as “talking white”—an example Nina Sun Eidsheim gives in The Race of Sound. Science studies scholar Cyrus Mody cites lab technicians’ aesthetic appreciation for a lab’s sonic conditions as an example of the ways sounds come to matter tacitly to knowledge production even when not the explicit focus of a research study. Listening tacitly names a shift from what to how one listens, its political valences and material consequences.

4. Opening. A practice of becoming more sonically aware, such as “soundwalking,” a walking-based method of sonic ecological exposure developed by composer Hildegard Westerkamp and recently expanded as a Black feminist methodology by ethnomusicologist Allie Martin. These ways of listening invite ethnographers to linger in sonic encounters and to attune to ways of knowing that might be silenced or otherwise shut out, either by dominant groups or by the ways we (you and I) have been taught “to listen” and give attention. Listening-as-opening is a practice of making room: for imagining otherwise, as Frantz Fanon describes Algerians’ listening to Voice of Algeria radio during the Revolution; for lower frequencies, at which, as Paul Gilroy reminds us, countercultural possibilities emerge; for the musical in the ordinary, such as in the compositions of John Cage.

5. Repetition. A practice of listening over and over and over again—whether out of habit or circumstance or pleasure or intention or creative practice. Repetitive listening has technical affordances as well as spiritual and oneiric ones. It hones skills and dreams, both of which nurture the potential to bring possibilities into being. Repetition is generative; with each listen, new hearings or affiliations may emerge (see Weheliye 2005). Each listen is an occasion for fresh hearing: for gleaning something more or for unraveling hegemonic accounts or for simply becoming more present to each other and ourselves. As such, repetitive listening is critical as a practice of learning; in repetition lies a mechanism for fine-tuning one’s body-ear and a means for listening our way into practices of creation, care, and collectivity.

A microphone hangs down from the top right-hand corner over a large white disk marked with several blurred black streaks, which dominates the center of the artwork. Flowers, greenery, and seed heads overlap with the disk and form the foreground in the left-hand side of the image and the bottom right-hand corner.
Credit: Colleen Pesci 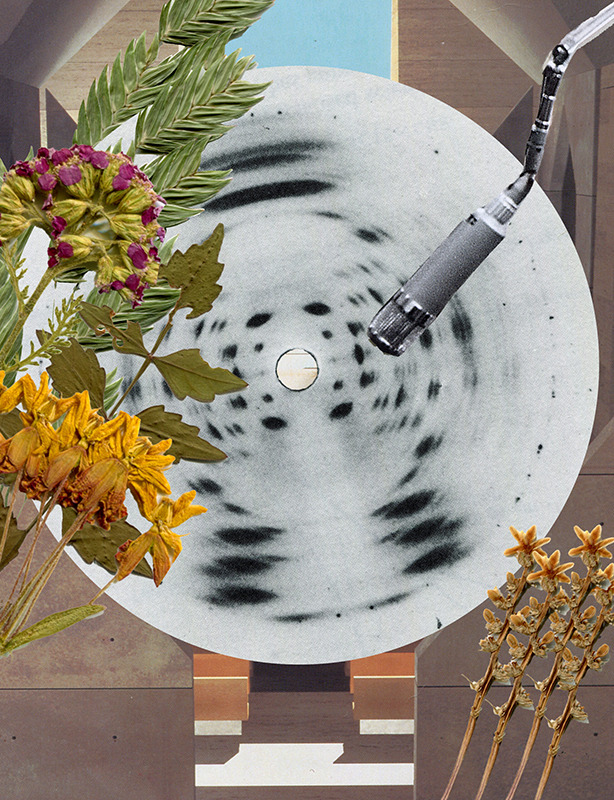 6. Memory. When I lead ethnographic listening workshops, I like to prompt participants with the question, “What does home sound like?” to activate aural memories of elsewhere from where we sit together. Home sounds like onions sizzling in the kitchen. Like footsteps crunching snow. Like the distant purr of cars passing on the highway. As their responses accumulate, “home” itself becomes multiple, not just our ways of listening. My prompt invites remembered listening—a way of listening that is not auditory, though it has past auditory cues. But there is also listening which makes present pasts more distant than lived experience, such as Myron Beasley’s account of listening to a remix of Zora Neale Hurston’s haunting voice; “rememory,” as Toni Morrison tells us, collects pasts in ways “mindful of and rebellious toward” the expectations and erasures of established histories.

7. Corporeal. Ways of listening that are of-the-body-of-the-world. Corporeal listening is multisensory, lending attention to sound through touch, vision, movement, gesture, and so on. Listening that registers through a raised eyebrow. Listening with multimodal cues such as while watching films or communicating in sign language. Listening that guides bodies across dancefloors. Listening that haptically records the rumblings of underground trains or shifting earth or approaching storms. Such listening is not limited to individual experience, as Thomas Csordas emphasizes with the concept “somatic mode of attention.” Corporeal listening awakens anthropology’s methodologies to the ways in which listening registers bodies in the presence of other bodies; bodies collectively and culturally situated in the world.

8. With audio media technologies. Amplifiers, Bluetooth, cassettes, computer software, headphones, loudspeakers, mixing consoles, musical instruments, microphones, phonographs, receivers, recording devices, sound cards, stethoscopes, stereo speakers, transistors, ultrasound probes. These and other audio technologies play a protean role in human listening given the ways they both assist and limit hearing. Listening with audio media technologies can extend listening capacities or silence frequencies that inhibit commercial circulation, cultivate active listening or shut out unwanted sound, connect people or create a barrier, become sites of contention or resistance, create archives, facilitate repeat listenings—often several of these at once. Audio technologies can be heard as creating authoritative records and subjective accounts. They can generate pleasure or recede to the background or cue up memories or impose pain or facilitate imagination.

9. With visual/textual media. From analyzing archival documents, writing poetry, and designing architecture to notating music, reading closed captioning, and viewing photographs, ways of listening with visual/textual media abound. Christian Marclay’s Surround Sounds merges audio and visual listening by composing an immersive installation out of animated onomatopoeias. W. E. B. Du Bois brings “Sorrow Songs” into literary imagination by beginning each chapter of The Souls of Black Folk with their musical transcriptions. Tina Campt listens to photographs as a method of noticing quotidian practices of refusal. Hillel Schwartz compiled an entire bibliography of children’s books for his cultural history of Making Noise. David Adjaye listens architecturally to a community’s stories by designing them into “a building’s DNA.”

10. Listening to others listen. Attuning to the ways of listening practiced by those with whom we anthropologists interact and the perspectives their listening affords. These listening subjects might include nonhuman beings as well as human persons. I call these “dialogic listening” practices, taking inspiration from Steven Feld’s “dialogic editing” approach to producing Voices in the Forest. Dialogue, Feld reminds us, requires methodological innovation, “practical efforts to present multiple voices in a text, and to encourage readings from diverse perspectives” (quoting George E. Marcus and Michael J. Fischer’s Anthropology as Cultural Critique). Gulu SoundTracks experiments with dialogic listening by bringing everyday practices of listening and socializing into the form and process of ethnographic audio production with Ugandan music producers Kaunda, Mellix, Black, and Usaih.

Colleen Pesci is a visual artist, educator, and curator/founder of The Casserole Series.

Joella Bitter is a 2021–22 American Council of Learned Societies (ACLS) Fellow. She specializes in the anthropology of sound and experimental ethnography. This list emerged out of her research in Gulu, Uganda, and has been fine-tuned as part of a pedagogy she developed to teach ethnographic listening methodologies. Her research has been supported by the Wenner-Gren Foundation, the National Science Foundation, the American Council of Learned Societies, and Duke University. You can learn more about her teaching, writing, and sound-based projects at joellabitter.com.