Our eagle-eyed editor, Sue Kenyon, always on the lookout for material for columns for our section news column, asked me to say more about the folks in this picture, previously published in “Moonwalk Memories.” I am delighted to. As I look at it, over and over, I am gratified at its success as a photo capturing dear friends and contributors at a crucial time in our lives and in the development of anthropology in Ethiopia. 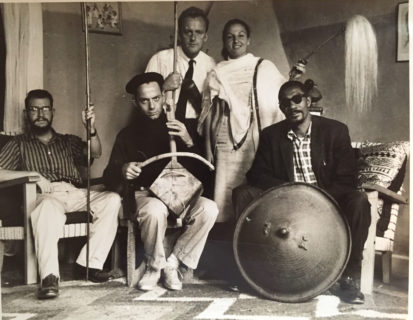 American anthropological interest in Ethiopia began in the late 1950s and we had a considerable presence in that enormous empire, with its many peoples speaking more than 70 languages. The photograph was taken in 1959 at a moment when this group of researchers happened to be in Addis Ababa at the same time; we would usually have been dispersed at our field sites. It was taken in the house that was rented by Donald Levine.

Don (1931–2015) was actually a sociologist with a PhD from the University of Chicago. He is the fellow in the beret, seated with the one-stringed instrument (masenk’o). He had been influenced by Robert Redfield and was the unusual sociologist who did fieldwork among rural Amhara farmers in the North as well as with the growing group of educated urban Amhara men in the capital. His research resulted in one of the most noted and debated books on Ethiopia, Wax and Gold: Tradition and Innovation in Ethiopian Culture (1965). He was also well known for his writings about classical sociological theory. Don spent his whole career at Chicago, serving as master of social science and as a dean of the college. He died in 2015.

William Shack, sitting with the shield and dark glasses, was a Chicagoan who got his PhD at the London School of Economics. Bill made the Gurage peoples south of Addis Ababa the focus of his early research, but he too worked with their urban relatives and compatriots in Addis Ababa. In addition to his book, The Gurage: A People of the Ensete Culture (1966), he co-wrote and edited several other works and ended his career with the posthumously published, Harlem in Montmartre: A Paris Jazz Story between the Great Wars (2000). Bill taught at the developing college, then university, in Addis Ababa from 1962–1965, but returned to the United States and spent most of his career at University of California, Berkeley, where he became dean of the Graduate School and served on numerous important committees. Bill died in 2000, just short of his 77th birthday.

The man standing, with the spear and tie, is Harold Fleming, a Connecticut Yankee (and Scot) and a Yalie, with a PhD from the University of Pittsburgh. Hal had a passionate and all-consuming love for languages and the problems involved in tracing physical, linguistic, and cultural origins and connections. He carried out linguistic fieldwork in remote areas of Southern and Western Ethiopia; discovered, described, and analyzed languages; and contributed a major new understanding of the Afroasiatic family. (He reclassified “Western Cushitic” as “Omotic.”) His teaching career was at Boston University and well after his retirement, almost to the day he died in 2015, Hal was a major contributor to and organizer of the Association for the Study of Language in Prehistory (ASLIP).

The woman in the picture, wearing a nat’ala and holding a fly whisk in her left hand, is Marcia (née Barbash) Lewis, my wife and an all-around good sport. She had majored in sociology and anthropology at Brandeis and very much enjoyed our two rounds of fieldwork in Ethiopia. For our later visit, 1965–66, we were accompanied by our three-year-old toddler and our three-month-old baby (at the start of the year). Marcia’s heart, however, was with medicine. When our third child turned 10 she started nursing school, and was a devoted nurse until her own illnesses brought her down. She died in 2006.

The fellow in the chair at the left, with the spear, is the proud photographer. I arranged the shot with the camera on a table, set the timer, and ran like hell to get into the picture. Everything went right, and I have had almost 60 years of pleasure looking at it and remembering those people and that time.

My own research in 1958–60 was with the Oromo people in Jimma, in the Southwest of the empire (the emperor, Haile Sellasie I, was in control at that time), studying both contemporary ethnography in a farming community and doing a historical study of the kingdom that had existed in the area, internally autonomous, until 1932. The research resulted in my dissertation and the book A Galla Monarchy: Jimma Abba Jifar, Ethiopia, 1830–1932 (1965). My later fieldwork in 1965–66 was with another Oromo group, very different from the Muslim people in Jimma, whose religion and much of their activity centered around spirit mediums and the powerful spirits that possessed them.

The American connection to Ethiopia was greatly diminished during the tyrannical and murderous regime of the Derg (the Provisional Military Government of Socialist Ethiopia) after 1974. For an overview of the history of anthropology in Ethiopia, see my chapter, “Anthropology in Ethiopia, 1950s–2016. A Participant’s View” in Seeking Out Wise Old Men: Six Decades of Ethiopian Studies at the Frobenius Institute Revisited, edited by Sabine Dinslage and Sophia Thubauville.

Herbert S. Lewis is professor emeritus at the University of Wisconsin, Madison.