The Cultural Universals in Avengers: Endgame

Finding meaning while succumbing to marketing.

I went to the 10 a m. showing of Avengers: Endgame on the Saturday of its opening weekend with my friend Dino. We’d seen its predecessor Avengers: Infinity War together last year; we see a bunch of movies together, binge watch TV shows over take-out, take each other to plays and musicals. We help each other process our experiences to understand and create meaning. That day, we did so at an iconic diner in Hollywood. It is a social activity for us, but it also illustrates the social construction of meaning. Film and television narratives are particularly social: they are made collectively, watched simultaneously by multitudes, and distributed worldwide. However, with a cultural artifact like Endgame, what constitutes “social” is almost unfathomable: Something like 100 million people worldwide saw Endgame on the weekend that Dino and I did. It was the most popular movie in 54 countries, from Vietnam to Lithuania to the United States. Probably a billion or more will see it in the next year, between the cineplexes, DVDs, streaming, and TV showings. My head started to hurt as I pondered what kind of meanings—layered, conflicting, political, transformative, chaotic—a fifth of humanity might create in response to a superhero movie, how Dino and I (my LA-based queer cinephile dyad) compares to a clique of Avengers cosplayers in Mumbai or a young family in Japan whose seven-year-olds are obsessed with LEGO Avenger action figures. 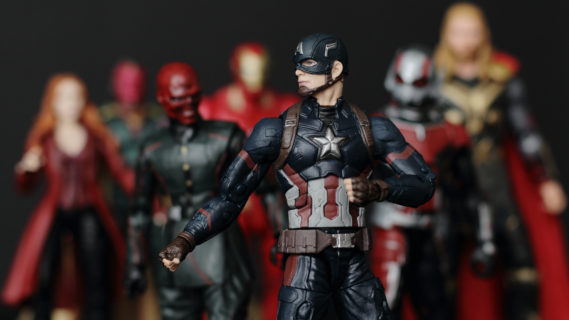 In case you weren’t part of the throngs that saw Endgame or the 21 previous chapters of the Marvel Cinematic Universe (MCU) epic, the basics of the film are not complex (despite its three-hour running time, nearly countless characters, and as many subplots): By the end of Infinity War, the purple-skinned super-alien Thanos has wiped out half of the life in the universe after putting on a glove bejeweled with six magic rocks and snapping his fingers (in one of my favorite action sequences ever). The dead include such luminaries as Spiderman, Dr. Strange, and Black Panther. Endgame tells the story of the remaining superheroes trying to reverse this intergalactic holocaust. The main impediments that Ironman, Captain America, Thor, the Hulk, and Black Widow face are the paradoxes of time travel, the post-traumatic stress of the survivors of the Thanos snap, and the conflict between ethical duty and filial piety. Anyone who has ever seen a family-friendly action epic knows that the good guys are always going to win, but how they get there and who survives the journey is the reason to watch. The film is very much embedded in the mythos of the tens of thousands of Marvel Comics published since the 1930s, but its ethos is not so idiosyncratic, its heroes not so flawed. Despite the convolutions of its origins and preludes, this movie is a simple story of heroism that resonates if not universally then damn near close.

Although I find the differences in how Endgame and the previous chapters of the MCU epic are interpreted across the globe fascinating—and if anyone wants to fund a transnational ethnography of cosplayers, please get in touch—the common and communal experience of Endgame moved me beyond intellectual excitement. Maybe my pessimism about humanity’s prospects is so deep that I am easily cheered by a glimmer of hope in the possibility that hundreds of millions of people might share in some way the morality of the Avengers. As someone deeply critical of globalized commerce and the countless problematic tropes of popular visual narratives, I should have been inoculated from Endgame’s bombastic and obvious themes, as I tend to be when confronted by, say, simplistic hagiographies like Bohemian Rhapsody or paeans to toxic masculinity like Wolf of Wall Street. But Endgame’s adulation of heroism, sacrifice, and duty deactivated my normally hypercognized cynicism.

I am aware that a large percentage of people who read that last paragraph will roll their eyes, and hard. Please note that Dino did not roll his eyes when I said this at the diner, and not just because he’s a friend. We both know a good number of people will simply reject the idea that a superhero film—a comic book movie—could be aesthetically or culturally profound. And a probably larger number of Anthropology News readers will take a Marxist tack to bemoan the abuses of late capitalism that must lie behind the omnipresence of the Marvel Cinematic Universe. The former should stop reading and go buy a copy of Carl Wilson’s Let’s Talk About Love: Why Other People Have Such Bad Taste, and then have a good long period of self-reflection before coming back. The latter group has a point, but only up to a point. Dino is an entertainment marketing professional who majored in romance languages and literature, so of course we ended up in a discussion about Disney as iconic of both capitalist excess and essential storytelling. Disney’s ability to insert its products, whether they’re Marvel movies or Mickey Mouse plushies, not just into everyone’s home but into their psyches is insidious and, honestly, astonishing. Marx is great for critiquing my desire for a Captain America action figure, but not so useful for my love of and desire for heroic tales. Those predate the written word and, likely, cave drawings. It’s only now that we have the technology to create such sense-shattering special effects, distribution channels to put the imagery in every corner of the planet, and social media to foster (or inflame) conversations about those stories.

Endgame is the climax of a heroic epic, which is, in Joseph Campbell’s words, the story of “someone who has given his life to something bigger than himself or other than himself.” The film is an ensemble, with multiple classic and classical heroes, but only the film’s one central hero was formed in a molten mold: created, revised, and recreated over several millennia. It is a story that has been told before and will be told again, and it resonates in part because of its similarity to Game of Thrones, The Lord of the Rings, the Harry Potter novels, and Star Wars, but also to Robin Hood, Beowulf, The New Testament, Exodus, The Ramayana, The Odyssey, and Gilgamesh. Endgame may contain its fair share of pandering fan service but it also delivers moral models that might be worth emulating and are definitely worth debating. Dino and I did so at a diner in Hollywood. My home fries were undercooked, but the conversation was meaningful.

A psychological and medical anthropologist, Theodore K. Gideonse teaches in the Program in Public Health at the University of California, Irvine. He is also a film critic, and before academia he was a journalist, an editor, a literary agent, and for a brief time, a judge for Guinness World Records.