The Moon as Metaphor in Migration Research

Chinese migrants are influential players in the Made in Italy fashion sector. They are also perceived as unfamiliar and alien, inauthentic producers of uniquely “Italian” merchandise.

I figure I was seven years old when Apollo 11 landed on the moon. I remember being at my neighbors’ house, sitting on their oval braided rug, watching the small-screen TV. I can still picture those fuzzy black and white images of the spacecraft and astronauts. Neil Armstrong uttered his famous words: “That’s one small step for man, one giant leap for mankind.” I get chills when I replay that moon landing on the internet. 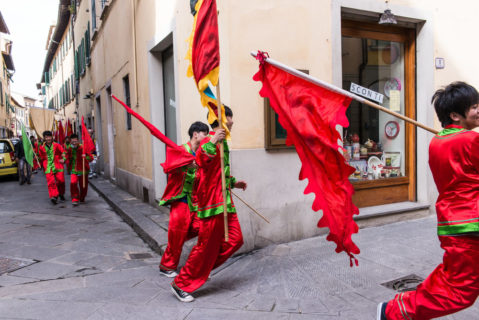 Youths run through the streets of the historic center in Prato, Italy, during the dragon parade of Chinese New Year festivities. Agnese Morganti

Those chills serve as a sensory sign of what that moment represented: crossing into a new frontier. I imagine my young self’s view of the event was as ordinary as it was extraordinary. The world was full of possibilities. I had just been inducted into a neighborhood gang called Young Rebels, with three painful punches to my right arm, and I had just experienced my first kiss with a boy after our group had wrapped up a game of high jump, sitting at sunset on an old striped mattress intended to soften the fall.

Decades later, that same frontier would soften the landing of a metaphor that referenced an “alienated” supply chain. Indeed, the moon landing came to mind a few years ago while conducting research on migration in Europe with a transnational team. At times, the fieldwork seemed close to science fiction: Chinese migrants had become prominent players in the Made in Italy fashion sector in greater metropolitan Tuscany. These stranieri owned and operated 5,230 firms in Prato, according to Chamber of Commerce data. They spoke of “spiritual insistence” related to the pursuit of becoming entrepreneurs. Who would have imagined such a scenario during the late 1960s era of economic boom and labor struggles?

In December 2012, a fire in the Chinese-operated Teresa Moda factory killed seven immigrant workers, transforming the city into a dystopic post-human rights center of globalization. The tragic event propelled politicians from the far right and center left to join together and claim they cared about migrant rights and well-being. Their solution was to recruit Italians as health inspectors to intensify surveillance of factory safety conditions.

One evening about a month later, in January 2013, my research collaborator invited me to attend an after-party for Pitti Uomo, one of the most important trade shows in men’s fashion. The big event, held in Florence, reported record numbers of buyers, sellers, and visitors. Light shows and Renaissance palaces served as amnesiac elixirs for the global labor behind all those handsome clothes.

The private party took place in a boutique menswear store in a hip neighborhood of Florence. Johnny, the owner, had managed to keep a step ahead of many other Italians who had left production in light of intense global competition. We eventually would visit his small sweater factory in the Medici hills outside Prato. He insisted that he employed only Italian workers except for one phase of production—ironing. He told us that Italians no longer did that work. He spoke about the challenges in the sector and mused about the future. “What would happen if all the Chinese people in the world went to the moon?” he asked. I was taken aback. I did not know what to make of the moon comment. His tone was matter-of-fact. Why the moon? Why could or should they leave the earth? The remark resonated not only as a troubling thought experiment—one with echoes of mass deportation—but also as a radical metaphor of alterity.

The moon stands for other worlds and hence otherness. Migrants are constantly positioned as others in everyday language. Migrants are racialized as others. As non-citizens, they are also doubly otherized: they legally do not “belong.” Temporary pathways may provide belonging through state-sanctioned documents such as residency permits, which require that the “aliens” and their children have ongoing, tense, and anxiety-producing encounters with the state.

The moon comment also points to the centrality of Chinese workers in the fashion industry and raises questions about the consequences that their sudden disappearance would have for the flow of goods, for the very mechanisms of the market.

The context of Chinese immigrants in Italy and the hegemony of global supply chains got me thinking about the complexities of value, of the earthly world, of social worlds, and of other possible worlds—utopic and dystopic.

In my book Tight Knit, I argue that the value of the Italian brand is rooted in historical sentiment that is deeply bound up with the myth of continuity with the Renaissance. Having Chinese making the Made in Italy, whether fast fashion or luxury brands, strikes many people as strangely inauthentic. Such a reaction suggests a sense of being unmoored from the familiar. It is akin to the strange feeling one gets when witnessing astronauts float around on the surface of the moon given the absence of gravity.

Migration is not new to greater metropolitan Tuscany. Postwar migration has included regional, national, and transnational movements of people to its cities, as Massimo Bressan and Sabrina Tosi Cambini recount in their ethnographic research on the factory city. A first phase of migration came on the heels of World War II, as peasants abandoned the Tuscan countryside to throw off the shackles of patriarchal power but retain relations steeped in reciprocity and communitarian experience. A second phase occurred during the boom of the 1960s, as migrants from Italy’s Deep South left behind agriculture, bringing southern habits and dialects, and experiencing discrimination as they sought housing and employment. In a third phase, especially since the 1990s, transnational migrants have come onto the scene. The majority originates from China, with most born in the city of Wenzhou in Zhejiang province.

As with much popular discourse about immigrants, alien metaphors abound. Common framings point to profound feelings of alienation. The moon comment seemed par for the course when considered alongside such sentiments. Some viewed the Chinese as outright occupiers who did not care about Italian culture, history, or art, let alone the environment or labor rights. Other Italians recognized the Chinese migrants as dwelling in a similar structural niche. “I cinesi siamo noi—We are the Chinese,” one retired Italian sweater maker told me in reference to long work days—“20 hours, 18 hours, 16 hours”—and intensive flexibility in the context of localized outsourcing in the 1980s and 1990s until closing his shop in early 2000. Similarly, one Chinese migrant woman described how the cut-and-sew work was laborious: “Staying here, people tend to become more apathetic, always doing the same thing, always the same, they don’t have changes. Most people have this sensation, that staying here stiffens the brain.”

My brilliant astronomy friends remind me that the space program generated a lot of innovation, from high-tech fibers to observational systems. This includes the recent networked telescopes that captured the first image of a black hole. From the perspective of changing lifestyles, the program may seem like it mostly petered out. Trips to the moon did not become a regular thing. Humans did not set up space colonies on the moon or elsewhere. Space suits did not become fashionable. Nevertheless, the moon landing remains deeply significant as a metaphor for alterity and possibility.

Connecting migrants and the moon serves as a reminder for anthropologists to tune into myriad encounters with possibility and alterity, particularly those forms that serve as tactics of othering under the guise of metaphoric softening. How often do clever phrases, side remarks, or jokes cover up deep-seated xenophobic sentiments? Just like an old mattress might soften a fall, so too can a fresh metaphor soften a racist slur. As powerful turns of phrase that construct discourses, such metaphors may lighten the landing of thought experiments. In reality, their deployment exists within a constellation of troubling ways to sustain migrants as cultural aliens.

Elizabeth L. Krause is professor of anthropology at the University of Massachusetts Amherst and author of Tight Knit: Global Families and the Social Life of Fast Fashion (2018).