The Next Piece of Our Big Genetic Puzzle

Around 50,000 years ago, Neanderthals contributed their DNA to modern humans. But the genes also flowed the other way, hundreds of thousands of years before.

In 1856, in what is present-day Germany, a group of miners unearthed a mysterious skeleton. The bones appeared very human-like, displaying features undoubtedly familiar to the people who discovered them, yet the skull’s massive brow-ridges were nowhere to be seen among people in modern times. This individual, and many others like him found over the decades that followed, transformed the way we understand human evolution. The location was called Neander Valley (Neanderthal in German), named after a man whose family name could be translated as “Newman” (history showing its sense of humor). Of course, the “New People” from Neander Valley became known as Neanderthals.

Resolving the evolutionary relationship between Neanderthals and modern humans became one of the most contested topics in anthropology, fueling fierce debates for more than a century. Did Neanderthals represent a mere transitional state toward a modern human phenotype or an entirely new species of humans? If they were two contemporaneous populations, did Neanderthals cross paths with early modern humans as these migrated out of Africa around 60,000 years ago? Most importantly, is it possible that they interbred and had children together? Could it even be that these children are among our own ancestors? Morphometric analyses of some of the earliest modern human remains in Europe argued for the presence of Neanderthal-derived morphological features, suggesting Neanderthals somewhere in their family history. However, to settle the question of whether or not a Neanderthal genetic legacy survives in people today, we needed to retrieve DNA from Neanderthal bones and teeth and then look for fragments of this DNA in the genomes of present-day humans.

An X and Y chromosome are displayed side-by-side. The ends of both are a vibrant yellow that shifts to green.
Credit: Nathan Deverey/Shutterstock 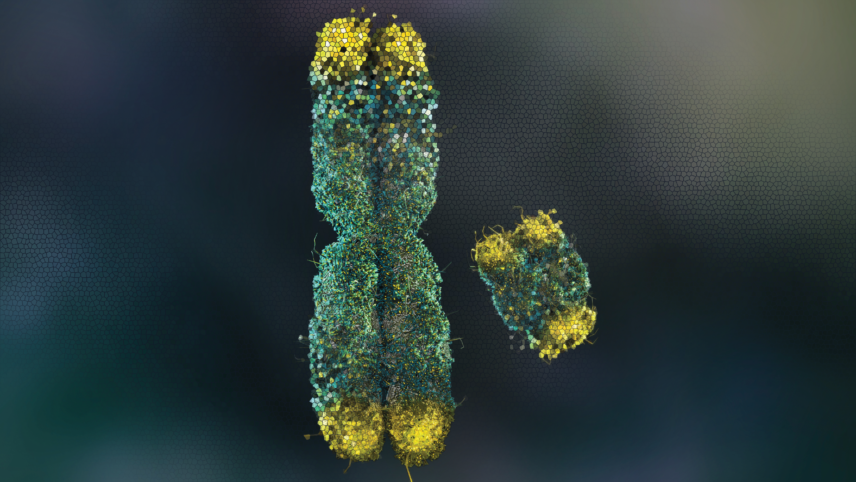 A 3D rendering of X and Y chromosomes with telomeres.

Unfortunately, extracting ancient DNA out of ancient skeletal material is extremely difficult because DNA molecules are notoriously fragile and start decaying immediately after an organism’s death. We have long known that Neanderthals vanished from the fossil record around 40,000 years ago, shown most recently by the archaeologist and radiocarbon dating specialist Tom Higham and colleagues, who pieced together a rather haunting timeline of their disappearance. This made the probability of finding surviving Neanderthal DNA even less likely. Despite these poor odds, in 2010, about 150 years after Neanderthal bones first saw the light of day in the Neander Valley, a monumental coordinated effort of archaeologists, molecular biologists, computer programmers, and geneticists at the Max Planck Institute for Evolutionary Anthropology in Leipzig and other institutions all over the world, culminated in the first whole genome sequence of a Neanderthal. Comparing this genome to the DNA of present-day humans shed light on thousands of small segments of Neanderthal DNA still surviving in the genomes of people living today—about two percent in everyone with non-African ancestry—a clear consequence of ancient interbreeding between Neanderthals and modern humans. Soon after, computational geneticist Sriram Sankararaman utilized the fact that the shuffling and crossing of chromosomes from generation to generation follows a predictable, clock-like statistical pattern to estimate when that admixture happened around 55,000 years ago, right at the time that the first modern humans wandered out of Africa and into Eurasia, where Neanderthals had already lived for hundreds of thousands of years.

Although the publication of the first Neanderthal genome settled a long-standing question about our ancestors’ mating with Neanderthals, it was only the start of the ancient DNA revolution. In the same year, a completely new extinct kind of humans was discovered in Denisova cave in the Altai mountains, based on nothing more than a trace amount of DNA extracted from a miniscule piece of pinkie bone. The genomes of those people, now called the Denisovans, was sequenced by the same team of scientists who generated the first Neanderthal genome, and tells the story of a sister group of Neanderthals who ranged from Siberia to Southeast Asia, and who split from their European Neanderthal relatives around 400,000 years ago, long before anatomically modern humans emerged in Africa. Fascinatingly, present-day people living in Oceania carry as much as six percent of Denisovan ancestry in their DNA, and that is on top of the two percent of Neanderthal DNA! Clearly, the story of our origins is the story of mixing with other—sometimes very different—human populations.

Genes flowing in the opposite direction?

Given the overwhelming evidence for introgression of Neanderthals and Denisovan DNA into modern humans, it has been surprisingly hard to detect the signatures of gene flow in the opposite direction. Even the first analysis of some of the last known Neanderthals to walk this planet—carefully selected by Mateja Hajdinjak, an expert on the interactions between the last Neanderthals and the very first European modern humans, as the most probable candidates to carry pieces of DNA of modern humans—turned up frustratingly empty handed. Of course, if the mixing of these populations really did occur in only one direction, it would have dramatic consequences for our understanding of social dynamics of ancient humans. But, as it sometimes happens, the evidence was there but we were just not looking in the right place. The most direct evidence of the flow of genomic DNA from modern humans into Neanderthals came from the unlikeliest of sources—the Y chromosome.

The Y chromosome is arguably the strangest and most mysterious part of the human genome. First, it is carried exclusively by males and so it is inherited from fathers to sons in an unbroken lineage, and is left out of the DNA reshuffling process undergone by all the other chromosomes in each generation. Second, because all archaic humans (Neanderthals and Denisovans) with sufficient amounts of surviving DNA for whole genome sequencing had turned out to be female, their Y chromosomes remained enigmatic—a frustrating gap in our otherwise complete genetic record. The main reason for this is that when DNA is extracted from a bone or a tooth after hours of painstaking work in the cleanroom, it often turns out that most of it belongs to the microbes that colonized the skeletal remains after the deceased’s passing. It is not uncommon to find that more than 99 percent of the sequenced DNA is of microbial origin, making it uneconomical at best and impossible at worst to sequence in order to study a small subset of DNA that is endogenous.

The real breakthrough came last year, when another technological leap—a technique called DNA capture—made it possible to finally access the Y chromosomal DNA of several male archaic humans, despite their prohibitively high levels of microbial contamination. Borrowing from the microarray technology commonly used in medical genetics, this method is based on producing millions of very short artificial DNA molecules in a laboratory, which are similar to the DNA sequence of interest, such as the hominin Y chromosome. These molecules are then used to fish out precious ancient DNA molecules from the sea of microbial contaminants, leveraging the fact that similar DNA fragments tend to bind to each other (the same type of binding that holds the strands of our own DNA together). After performing the capture procedure on the extracted DNA, any molecules which are not bound to the carefully designed DNA probes are discarded, washing away the contaminants and retaining nothing but the bound DNA to be sequenced. The level of DNA enrichment allowed by this procedure is quite staggering—in our case it led to several hundredfold or even thousandfold enrichment of the Y chromosome DNA. This is what made it possible to finally sequence them for the first time and comprehensively look at the Y chromosomes of extinct humans.

The first and the most important question was obvious: How are these Y chromosomes related to each other and to those of present-day humans? Compared to the long and arduous molecular biology procedures that preceded the sequencing, answering this fundamental question was surprisingly easy and came down to standard practice in phylogenetics: counting the similarities and differences between DNA sequences. Our expectation was clear: because Neanderthals and Denisovans are sister species, having split from present-day humans around 600,000 years ago, their Y chromosomes should follow the same pattern. Yet to our complete surprise, the Y chromosomes sequenced from the Neanderthal remains did not look like they were Neanderthal at all—they looked more like the Y chromosomes of modern humans. The most parsimonious way that this could have happened was via interbreeding, which not only introduced modern human Y chromosomes into the Neanderthal population, but at least partially replaced the original Y chromosomes that the first Neanderthals carried. It is difficult to put a definite timeline on this, but our best guess is that this happened very early in our evolutionary history—probably at least 200,000 years ago—much earlier than the gene flow from Neanderthals into the ancestors of present-day non-Africans.

Similarly, we can only speculate as to why this dramatic chromosomal turnover happened and why it affected only Neanderthals but not Denisovans. It is quite possible that the Y chromosomes introgressed from early modern humans were beneficial to Neanderthals, allowing them to take over. In 2016, population geneticists Kelley Harris and Rasmus Nielsen used computer simulations to show that over the millennia since they split from modern humans, some parts of Neanderthal DNA probably accumulated an excessive number of harmful mutations compared to modern human DNA, as a consequence of their low population size and reduced efficacy of natural selection. It is quite plausible that Neanderthal Y chromosomes suffered the same fate, and carried so many harmful mutations that they have been outcompeted by the “healthier” introgressed modern human Y chromosomes in the evolutionary race. What is even more fascinating, is that it is not just Y chromosomes that experienced a complete turnover. Matthias Meyer, a paleogeneticist known for retrieving DNA from extremely old Neanderthal remains, such as the approximately 430,000-year-old remains of individuals from Sima de los Huesos in Spain, has shown that mitochondrial DNA, passed on exclusively through the maternal lineage, experienced the same replacement! There is now no doubt that DNA exchange between Neanderthals and modern humans occurred both ways, and that both populations raised offspring of such sexual intermingling.

It might be tempting to conclude by saying that the sequencing of Neanderthal and Denisovan Y chromosomes has finally filled in the last piece of the genetic puzzle—the last missing chromosomes in our genetic record of archaic humans. But this would be cheating a little bit. Because the Y chromosomes we sequenced from Neanderthal remains came from early modern humans, a consequence of ancient gene flow and replacement hundreds of thousands of years ago, we need to keep looking for DNA in the remains of much older Neanderthals who still carried the Neanderthal Y chromosomes from before this replacement took place. With any luck, this will allow us to understand a little better when and where this interbreeding occurred, and perhaps even get a little closer to understanding the identity of the early modern humans who mixed with Neanderthals at the dawn of our own history. Who were these people? Where did they live? And how are they related to us? Yet again, by finishing one chapter in the story of our evolutionary past, another blank page is opened.

Martin Petr did his PhD at the Max Planck Institute for Evolutionary Anthropology in Leipzig, where he worked on the timing and functional consequences of introgression between archaic and modern human populations. He is currently developing novel methods to detect subtle patterns of more recent human history as a postdoctoral fellow at the GeoGenetics Centre of the GLOBE Institute at the University of Copenhagen.