Earlier this year, journalist Wayne Ma published an article in the Wall Street Journal titled “Marriott Employee Roy Jones Hit ‘Like.’ Then China Got Mad.” This title is important because it could be an equation for any number of articles on Chinese geopolitics in the digital era. Companies and politicians that interact with or on behalf of Chinese ethnic peripheries often find themselves in a difficult predicament wherein China flexes its economic power in order to influence its hegemony abroad. Indeed, the Chinese state has a long history of becoming agitated when confronted with criticism or even outside awareness of situations that the government deems “sensitive.” This often comes in the form of some high profile media activity in which a politician or celebrity meets with or speaks about the Dalai Lama or a representative of Tibet in some notable capacity. China’s response is invariably negative and warns of consequences relating to foreign relations with the country.

However, the subject of the aforementioned article by Ma marked a change of pace. Ma wrote that “Roy Jones, 49 years old, never thought that a $14-an-hour job running social media accounts for Marriott International Inc. would require him to know global politics.” Jones’s misstep was to first share a survey on the social media site listing Taiwan and Tibet as separate countries rather than territories of China and second to “like” a tweet from a Tibetan activist group congratulating the hotel chain for this distinction, likely simply going through the motions of “liking” any interaction with the company. Erroneously, Jones (and likely Marriott by extension) believed his actions in a digital environment were somehow detached or “less real” than physical actions. Along with almost two decades of social research (see further reading), the consequence of Mr. Jones’s one click was the fury of both Chinese Twitter users and the state itself, as Marriott was quickly admonished by the Chinese government, which demanded Marriott both to issue a public apology and to “seriously deal with the people responsible.” The company quickly did so and on January 14, 2018 terminated Jones’s employment. Other companies such as Mercedes-Benz and US airlines companies have similarly been criticized and threatened with economic consequences by Chinese authorities for similar online actions.

This time, however, someone, not within the state of China, lost his job. Chinese hegemonic authority became transnational and the famous “Great Firewall” that censors Internet content within the country moved outward. US Senator Marco Rubio also noticed the Marriott story and aptly commented on the “long arm” of the Chinese state in terms of geopolitical power on Twitter. In clarification, he also tweeted an article by the Economist which claimed that the Chinese state kidnaps or “convinces” dissidents outside of China to return by threatening family members within the country. What these situations amount to is an interesting amalgamation of political and economic forces originating in and continuing through digital environments. The simple action of hitting a button and ‘liking’ a tweet became the flashpoint of a complex geopolitical process that lost a man his job; lost the company doing business in China revenue; and elicited a response from a US government official on the same platform.

The analysis of this subject as it relates to digital global geopolitics opens up several avenues for potential anthropological research. My master’s thesis, for example, relates to how Tibetan individuals living in the United States use technology such as social media to subvert these forms of transnational hegemonic power and preserve a Tibetan ethnic identity in diaspora. Previous research exploring the topics of transnational identity and digital diaspora have also been published by Victoria Bernal and Jennifer M. Brinkerhoff (see further reading); however, neither provides much detail on the inverse of state authority becoming international.

Of interest to me here is the specific case of China exerting its influence abroad and in doing so attempting to police “nation” outside of national borders. China’s government has a simple and set definition of what it is to be Chinese and who falls under that category in accordance with Article 33 of its constitution: those whose ethnic ties lie within the border of the state are Chinese, end of story. However, both within and outside of China the question of the Chinese national identity is anything but simple. The most prominent examples come from the Western borderlands of China (home to the Tibetan and Uighur populations). None of these populations exist in a vacuum and complex interactions among ethnic identities co-mingle and interact all across China. My current interests deal with the ways in which differing ideas of nation and belonging are policed or maintained online. This becomes more complex when one traces such state influence across borders digitally. 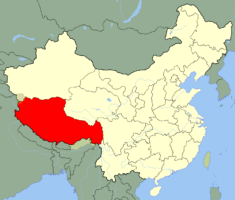 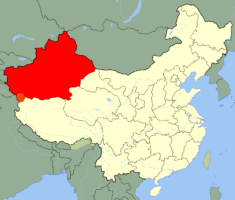 The case of Tibet and its people in relation to the Chinese state is an old one, but one that continues to draw activist and academic interest to this day. However, recent attention has been drawn to the Western Chinese province of Xinjiang, which is home to the predominantly Muslim Uighur people. Beginning in August of this year, news began to spread of possible human rights violations and the detention of thousands of Uighur individuals in the Xinjiang province (a convenient compilation of these sources was compiled by Magnus Fiskesjö of Cornell University). As of this writing, the Trump administration is considering the possibility of sanctions against China for these detentions. Notable here is the way in which those outside of China might become aware of these issues. Advocacy for Uighur populations would certainly be aided by digital news sources spreading information. China, however, has a different view on the subject, claiming that such sources are false and fueled by “anti-China forces.” In addition, a Chinese state official noted that the United States was in no place to criticize China due to the current administration’s policies such as the detaining of migrant children and the travel ban on Muslim-majority countries. This is an interesting example of how individual and state actors react differently to information shared through digital means.

Much anthropological writing has been devoted to how marginalized populations demonstrate agency through digital technologies (see the work of John Postill and his concept of the “freedom technologist”), but what of state authority in the globalized world? I am inclined to agree that new digital technologies provide novel pathways to groups of oppressed peoples, but I am cautious of utopian optimism in such technology. The #NoDAPL protests in the United States, for example, generated most of their advocacy online before mainstream media outlets picked up the story. However, in the case of the recent Rohingya Muslim refugee crisis in Myanmar, state authorities specifically shared misleading information on Facebook, which then led to various hate speech posts shared by citizens, leading to violence against the Ronhingya and drawing criticism of the Facebook platform from the UN.

Thus, a number of research questions can be asked of the Inner-Asian region. To what extent do those who identify as ethnic minorities have the agency to determine their participation or lack thereof in the Chinese national identity? To what extent is this bolstered or hindered by Chinese cyber-policies? On a larger level, the above examples also demonstrate an avenue for research into the new ways in which geopolitics play out on digital platforms like Twitter. Specifically, I am drawn to the idea of the “mobile society” and the applications to Inner-Asian cultures as was proposed in a recent article by Enseng Ho (2017). Also, as Srinivasan (2017) points out in his landmark text on the subject, we also must be conscious of the ways in which imperialist practices are bolstered through unequal access or control of internet technologies.

I began this piece by quoting Ma’s Journal article in which Roy Jones did not know he would have to be knowledgeable of global politics for his job as a social media manager. Perhaps we have reached a point in our time of the global Internet that such luxury is not afforded to anyone. Human actors are more connected to the state(s) through digital technology than ever before, and the consequences of seemingly simple interactions can be dramatic. Of interest to anthropology as a field is the way in which such actors traverse national and cultural boundaries and how these sites of interaction affectively become larger, mobile, and more consequential.

Jordan C. Keck is a digital anthropologist and second year graduate student at Ball State University. His research interests revolve primarily around the ways in which digital technologies affect human culture and he has a geographic interest in the Inner-Asian region (e.g., Tibet, Mongolia).

Carrie Hough is the contributing editor of the CSAS Section News, and an associate professor of anthropology at Augustana College.