Watching the World Cup in Russia

It is July 1, 2018, and Moscow is celebrating. After an incredible turn of events in the World Cup football championship, the Russian national team has defeated La Furia Roja, the Spanish national team and one of traditional favorites of international football. Russian fans are the most surprised of all: despite the tremendous popularity of football in Russia, the national team has long been a heart-wrenching disappointment. Muscovites are elated, streaming out of bars and houses onto the streets. Cars honk, people wave tricolor Russian flags, and a chant begins: “Ro-ssi-ya.” The celebrations will continue into late evening, and Nikolskaya Street, a pedestrian area that became an unofficial fan zone in Moscow’s center, will fill with jubilant fans. 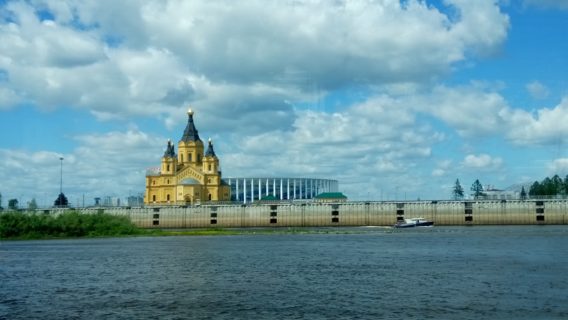 International mega-events like World Cup, with their fusion of global and nationalistic imagery, present a fascinating case study of international political economy, nationalistic rhetoric, transnational media consumption, and diverse experiences of spectatorship. This summer, I continued a research project focused on FIFA World Cup in Russia. I engaged in participant observation and media analysis, and interviewed a variety of individuals who either lived in cities hosting World Cup in Russia or who came to Russia as spectators.

National governments that organize global sports competitions often hope that these events will boost patriotism, generate economic development, elevate their country’s geopolitical significance, and promote future tourism (Horne 2012; Horne and Manzenreiter 2006). Russia’s political context adds further dimensions to the hosting of transnational mega-events. The country also hosted the 2014 Winter Olympics, and in addition to demonstrating Russia’s capacity to stage expensive, logistically complicated international competitions, the Games enabled Russia’s president, Vladimir Putin, to distribute financial resources and solidify alliances with key political figures and oligarchs, organize security forces, tighten security, and crack-down on certain non-governmental organizations (Orttung and Zhemukhov 2017). Four years later, the World Cup took place in the context of international censure and painful economic sanctions imposed by western states following the annexation of Crimea in 2014. Ultimately, Russian state media celebrated Russia’s World Cup, as it had Sochi Olympics, as an unmitigated triumph in terms of its organization, the relative success of the Russian national team, and foreign fans’ impressions of the event. Meanwhile, media outlets critical of Putin’s government, such as Echo Moskvy and Dozhd, debated whether the seemingly ubiquitous jubilation about the championship and national team’s advancement could ever be apolitical. Prominent dissident journalists and pundits argued that watching World Cup implies complicity with the regime and support of its policies.

But how did local residents of Russian host-cities experience the World Cup? Mega-events, with their infrastructural development, flows of foreign tourists, and global spectatorship, enable hosting governments to position their countries as modern, respectable members of the international community. The Russian government tried to signal its modernity and global significance through the transformation of urban space with state-of-art stadiums, modern bridges, riverside promenades, and expansive fan zones with large screens. These changes and efforts did not go unnoticed by Russian citizens. For residents of Kaliningrad, Saransk, Samara, and Nizhny Novgorod, investments in infrastructure, changed urban landscapes, and the presence of tourists was especially notable. But even Muscovites, who are used to city development, would recount with awe the innovations that were linked to the tournament, such as new pedestrian zones, parks, and renovated stadiums. Meanwhile, some residents of Nizhny Novgorod wryly noted that only foreign tourists prompted the government to invest money in cities other than Moscow and St. Petersburg.

My interviewees were enthusiastic about the future use of this infrastructure, but they also wanted to change Russia’s image abroad, proclaiming that “[Foreigners] will finally see that there are no bears on the streets of Moscow.” They were eager to counter what they described as negative narratives about Russia in international media—the Skripal poisoning investigation in the United Kingdom and allegations of interference in the US elections. For many of my interviewees, the World Cup offered respite not only from negative international media coverage but also from their own nagging feelings of shame and dissatisfaction with domestic infrastructure, governance, and Russian football.

Local residents were hopeful that foreigners would form positive impressions about Russia, but they also marveled at the carnival-like atmosphere created by fans from Mexico, England, Sweden, Uruguay, Brazil, Colombia, Argentina, and many other countries. Russia’s geography itself, with its infamous long distances, seemed transformed as special express trains carried foreign fans to Russian cities off the beaten tourist path. Many fans performed their national belonging by wearing national football uniforms, wrapping themselves in flags, putting on folk costumes, and singing and chanting national songs: a man from Nizhny Novgorod described a procession of chanting Swedish fans in national uniforms through the streets of the city. Certain streets became de facto gathering and partying spaces. In Nizhny Novgorod, a central street leading to the Fan Zone, became a place for fans to celebrate in bars and engage in song battles with each other, as Croatians and Argentinians did on the night before the Argentina-Croatia game. In Moscow, Nikolskaya street became an unofficial center of celebration, not far from a mini-fan area right on the Red Square. Two young Russians walking behind me near the Red Square noted the many being languages spoken and said: “It doesn’t even look like Moscow anymore; it’s like you’re abroad.”

While foreign spectators were very visible at the stadiums, in city centers, and Fan Zones, many Russian fans watched the games at home or in their neighborhood bars. Even if they could not afford tickets to the game or were too busy to visit the Fan Zones, they followed the games with great excitement and experienced World Cup as personally and socially significant (Besnier and Brownell 2012). Many of my interviewees had favorite clubs and players they followed through the year. I interviewed one woman in her late sixties in her apartment in Nizhny Novgorod, as one of the games was playing on the TV. She and her husband were avid football fans and watched all the games at home. Their youngest son was a semi-professional football player, and during the interview, the woman brought out mementos of his football career from childhood to today. Very knowledgeable about football, she provided detailed analyses of the strategies of various players and her favorite teams, which included Germany, Brazil, and Portugal. Other people I interviewed described personal experiences of the championship: get-togethers with friends to watch matches, parents and children celebrating the victories together, co-workers texting each other through the games, office betting pools, and the circulation of memes and videos among friends. Some of my interviewees were linked to the tournament through their work: one young man was employed by a company managing construction of a stadium (and never received his full payment), another man played in a band at a Fan Zone, and a woman recounted her challenging and rewarding experience of managing operations at one of the stadiums.

Personal experiences of the World Cup were varied: some individuals seemed uninterested in the championship, some followed it on television and in online forums, while others got to experience the excitement of watching a live game with world-class players on the field, booming songs in different languages, and animated fans chanting in the stands. A number of people noted with distaste that the government attempted to implement tax and pension reforms amidst the euphoria of the championship. Indeed, in the aftermath of the World Cup, a series of protests against the pension laws took place, prompting the government to slightly modify its position. Yet, most people refused to interpret the World Cup as the regime’s pet project. Instead, they described it as a once-in-a-lifetime carnivalesque event, memorialized in memes and uncanny for its jarring and thrilling insertion of global megastars and football mythology into Russian reality: Ronaldo roaming the streets of a provincial city-host of Saransk, Messi desperately trying to keep Argentina in the Mundial, France’s rising star Mbappe, and the unexpectedly decent performance of the Russian team.

Marina Mikhaylova is an Assistant Professor (Teaching/Instructional) of Anthropology at Temple University. Her research focuses on transnational governance, youth, politics of language, and local mediations of global events. She conducts fieldwork in Lithuania and Russia.

Correction
This article was initially published under the DOI 10.1111/AN.1064.