What to Call US Border Detention Centers?

The controversy over the term “concentration camps” stems from the connotations it carries, setting up analogies that risk hyperbole and overlook the complexities of historical comparison.

The government and media call them “immigrant detention centers.” They are meant to be temporary holding facilities—up to 72 hours—for migrants and asylum-seekers crossing the southern US border. But the average length of stay has become much longer and the facilities have become overcrowded and unsanitary. In a word, the conditions are inhumane. This seems to be partly by design as the Trump administration aims—in a bit of twisted logic—to deter migrants from seeking asylum by making the conditions at the US border worse than the conditions they have fled in their home countries.

The border station at Clint, Texas, as reported by the New York Times, has “up to 900 migrants being held at a facility designed for 125. In some cases, cells designed for 35 people were holding 155 people.” The Department of Homeland Security’s own inspector general noted in May, “Border Patrol agents told us some of the detainees had been held in standing-room-only conditions for days or weeks.” The New York Times further reported: “Outbreaks of scabies, shingles and chickenpox were spreading among the hundreds of children who were being held in cramped cells, agents said. The stench of the children’s dirty clothing was so strong it spread to the agents’ own clothing—people in town would scrunch their noses when they left work. The children cried constantly.”

Anodyne terms like “immigrant detention centers” or “immigrant processing centers” have lost their descriptive accuracy. But then what to call these places that are inflicting irreparable harm upon children and families?

The argument for using the term concentration camps stems in large part from how the term denotes, as Andrea Pitzer defines it, “the mass detention of civilians without trial, usually on the basis of race, religion, national origin, citizenship, or political party, rather than anything a given individual has done.” Pitzer’s book on the global history of concentration camps documents their use by various governments from the end of the nineteenth century to the present. Pitzer notes that the Trump administration’s description of its detainment policy as a deterrent further supports the characterization of the centers as concentration camps since they inflict extrajudicial punishment upon a targeted group.

Conditions at the border detention centers mirror the hostile rhetoric Trump has used to dehumanize migrants since the start of his campaign, trotting out the old tropes of Mexicans as criminals and drug dealers. He doubled down on his dehumanizing metaphors in the runup to the 2018 midterm elections, variously positioning Central American migrants as invaders, a flood, animals, or a disease. That corrosive rhetoric insidiously chips away at their humanity, helping to shift public perceptions of what is permissible when government bureaucrats are tasked with carrying out heinous policies.

Simply calling these places detention centers fails to adequately capture the suffering inflicted upon the people they hold. Calling them concentration camps attempts to alert the public to the moral crisis, forcing us to reckon with the inhumanity inflicted on those detained in the camps. 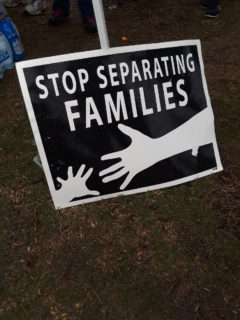 A sign from a rally to end family separation and child detention. Karen Holland / CC BY-NC-ND 2.0

But the term does more than simply denote facilities that violate the human rights and dignity of targeted groups. The term also points to historical contexts where it has been previously used, carrying powerful connotations along with it. Words are effectively an “ecology of barnacles,” as Donna Haraway once remarked, and concentration camps as a term is particularly encrusted with prior sediments of contextual meaning.

It’s true that concentration camps pre-date World War II and have been used since, but the term has become anchored to the historical context of the Holocaust during which Nazis turned concentration camps into extermination camps to systemically murder millions of Jews. Employing the term concentration camps today indexes this historical context and carries the extraordinary connotations associated with death camps when the term is inserted into the current political context. Using this term to label the border stations stirs controversy by creating a false equivalency with Hitler’s actions while minimizing the experience of Jewish victims and survivors of the Holocaust.

Masha Gessen describes how we erase the complexities of the past, mythologizing momentous events like World War II and the Holocaust so that “the myth becomes a caricature of sorts.” The thinking, as Emil Kerenji explains, goes something like this: “If we were in a period as intense as the genocidal years of World War II or as morally clear as the era of chattel slavery, surely our lives would be charged with high-stakes action.” However, instead of the simplified past, we live in the complexity of the present. Kerenji suggests this is exactly why the term concentration camps is useful in the current context: the term forces us to grapple with the incongruencies between the present and simplified past and see the complexity of the analogies at play.

If we could entertain the complexities of the type of historical comparison that Kerenji suggests, we would recognize how the “banality of evil,” as described by Hannah Arendt, allows bureaucrats, border agents, and government staff to go about their jobs while eschewing responsibility for the policies they have been charged with implementing. We would recognize the role dehumanizing rhetoric plays in enabling the mistreatment of others, how that rhetoric coupled with the force of law and a sense of duty sways otherwise good people to do abhorrent things, and how that rhetoric keeps the public indifferent and silent in the face of atrocities carried out in their name.

But the complexities of the historical lessons are too often superseded in public discourse by facile analogical correspondences indexed by the term, implying simplistic and ultimately unhelpful comparisons between Trump and Hitler, border detention centers and Nazi death camps. As Trump has shown us, bad analogies make bad politics. So, what to call these places that violate human decency and democratic values?

Adam Hodges is a linguistic anthropologist who writes about language and politics. His forthcoming book, When Words Trump Politics: Resisting a Hostile Regime of Language, will be out this fall from Stanford University Press. His previous books include The ‘War on Terror’ Narrative and Discourses of War & Peace, and his articles have appeared in the American Anthropologist, Discourse & Society, Language & Communication, Language in Society, and the Journal of Linguistic Anthropology.