When Women Take Up Space Not Built for Them

It is not enough to be intentional and intersectional in research settings. We must rework the spaces of the academy and knowledge production to better acknowledge and suit us all.

On March 26, 2019, NASA cancelled the first all-female astronaut spacewalk outside the International Space Station. The size medium suits needed by astronauts Christina Koch and Anne McClain were on board, but only one was prepped for a spacewalk. So instead, it was Koch and fellow astronaut Nick Hague who floated outside the space station to install new batteries. In light of the “giant leap for mankind” that the Apollo moon landing represented, this recent moment was notably “not one small step for women” (Schwartz 2019). It was not enough to have women in the places where there previously had only been men. In the end, this mission didn’t happen because of something as mundane yet essential as a spacesuit—because the space was not equipped for their bodies. 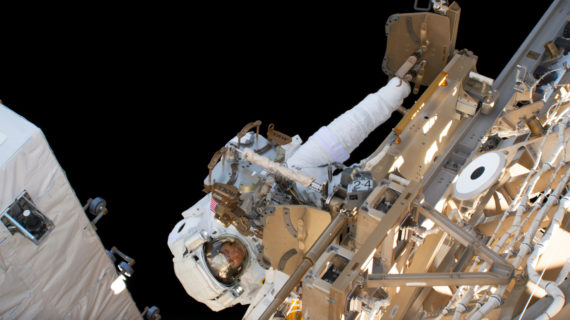 Media reports of the cancelled event shed light on the economic challenges NASA faces in outfitting its astronauts amid financial constraints and budget cuts. The agency discontinued XL and S sized suits but brought the larger size back because some astronauts needed them. The small suits, which are most likely to fit female astronauts, remain unavailable (Koren 2019, Neel 2019).

The ways that women inhabit and experience the world is fundamental to feminist anthropology (for example, Moore 1988, Hurston 1928), black feminist theory (for example, Crenshaw 1991, Collins 2009), and ethnic studies (for example, Moraga and Anzaldúa 2015). Women use and inhabit space differently than men, a critical area of research in urban design, development, and building infrastructure (Schwartz and Grown 2019). Such work attends to the need for women to lead design processes, to shape public space to better accommodate everyone who uses it.

Early work in feminist anthropology began by confronting how women were represented and who was telling their stories—their social place and importance siloed, their experiences set aside (Moore 1988). The field has grown in its critical engagement with theoretical questions regarding how political economy, race, religion, and expressive cultures are experienced and structured through gender. The feminist work of anthropological scholars has further pushed for greater attentiveness to bodies and embodied acts as sites of resistance to global patriarchy (for example, Moraga and Anzaldúa 2015, Lewin et al. 2016). This attention extends to highlighting the ideological infrastructures of anthropology that were not made for female, queer, and black and brown scholars. Ongoing efforts to decolonize the canon aim to ensure that female scholars, scholars of color, and female scholars of color are represented and cited, so that the theoretical and conceptual work they contribute to the discipline and their departments—so crucial to job security and promotion—is recognized and acknowledged (see for example, Bolles 2013, Durrani 2019).

Beyond the classroom and the canon, anthropologists are reconceptualizing the notion of “the field” and “the academy” as distinct spaces (see for example, Bolles 2013, Berry et al. 2017). They show us the violence of this spatial configuration not built for women of color or women or LGBTQI bodies, highlighting the myriad ways their bodies are implicated in the work they do. To think in terms of separation between fieldwork and the academy (or “real life”) is to ignore other ways that people navigate and engage with these spaces.

Scholars engage with systems and structures of power in the academy and in their sites of research in complex, diverse, wide-ranging ways, but a number of shared concerns have emerged. As Berry et al. (2017) point out, the notion of “the field” as that separate place which can be easily entered into and exited from, far from home, does not hold for many indigenous scholars and scholars of color. These movements are more fluid: friendships, kin, identities, and experiences cannot be bounded in research sites, did not begin there, and are not left there as fieldwork comes to a so-called end. Experiences of sexual assault, for example, are lived in our bodies, not left somewhere “in the field” (Berry et al. 2017), just as they might be brought with us to our research sites. Gendered power dynamics and violence can be exacerbated for women of color and LGBTQI scholars, whose bodies do not carry the same privileges as their white and male colleagues. This may be especially true, as Berry et al. (2017) reflect, for feminist activist anthropologists, whose attempts to curb their relative scholarly privileges and craft horizontal relationships with their collaborators are often complicated by their skin color, nationality, and identities. Their US education may create certain power imbalances, while their black womanhood and/or local identities and/or queer bodies may lead to other types of relations, including instances of sexual violence. Our bounded idea of the field is not equipped to deal with these scholars’ experiences, and the implications for those who are so precariously placed can carry over to stigma “at home,” a place that can also be the site of various forms of gendered and racial violence.

The field is no longer simply some far off place, and those with whom we work are not Others (Bolles 2013, 59). For our interlocutors, local scholars, indigenous scholars—for many of us— the field is real life. The practice of fieldwork, so indoctrinated into graduate students as a pivotal moment in their training and trajectory—a time to “make it through” and a space from which to then return—leaves little room for this blurring and these complexities, or for the relationships we have while doing it. This does not diminish the difficulties that graduate students face upon re-entering their departments, but these spatial configurations affect our interactions during these prolonged periods away.

The field is a space where feminist scholars are intentional in their investment in “practices of decolonization, intersectional thinking, and doing one’s fellow citizenry homework” (Bolles 2013, 6). But such work does not always cross the boundaries upon returning home to the academy, where it is in conflict with the systemic white privilege of the academy. It is not enough to have female bodies in certain places, be it the International Space Station or anthropology departments. They must also have a role in reconfiguring the space itself to ensure it is truly built for all bodies and their experiences. Decolonizing the canon and teaching are necessary, as are rethinking how we construct the spatial logics of the academy and the spaces of knowledge production. This takes intentional investment in making sure the spaces we inhabit and work within are suited for all of us.

Emily de Wet is a PhD candidate at the University of Notre Dame. Her dissertation work in Cape Town, South Africa, explores how the textures of daily life are creative of alternative spatiotemporal geographies, contingent upon and in contradistinction to experiences of racism, unemployment, apartheid and post-apartheid policy, and gender inequality.