Why Are American Elders More Accepting of the COVID-19 Vaccine?

How do we combat vaccine hesitancy? We might look to the personal stories of those who have experienced the role of vaccines in overcoming infectious disease.

Editor’s note: This essay was written in August 2021.

Older Americans accept COVID-19 vaccines more readily than the young, even in states with high vaccine resistance. Like the imminent hanging that “concentrates [the] mind” (Samuel Johnson), their heightened risk has certainly intensified senior vaccine acceptance, but that compliance has also been propelled by predispositions derived from lifetime encounters with infectious diseases (e.g., polio, pneumonia) that were eliminated through vaccines and antibiotics. Lacking these personal experiences, even though protected by these medical triumphs, younger Americans are ironically more receptive to vaccine resistance.

Most American elders are vaccinated, even in states with high vaccine skepticism. According to Centers for Disease Control and Prevention (CDC) data (August 8, 2021), 92.3 percent of US seniors aged 65–74 and 87.7 percent of those 75 and older had received at least one dose of the COVID vaccine, the highest rates in the country. While most younger Americans are vaccinated, their rates are lower: only 60.3 percent and 69.8 percent of the 25–39 and 40–49 age groups respectively. Vaccine hesitancy, moreover, is inversely related to age. In January 2021 only 11 percent of seniors over 65 reported being hesitant, a significantly lower rate than any other age group. With the rise of the Delta variant, hesitancy has been declining for all ages, but the least hesitant continue to be seniors.

American seniors are intimately familiar with childhood infectious diseases. Born in 1937 Brooklyn, I (like most agemates) contracted highly contagious chicken pox, whooping cough, mumps, and German Measles (rubella), as well as ordinary measles (rubeola), common colds, strep throats, and even pneumonia. My mother almost died from pneumonia, and according to family lore she lost siblings and cousins from diphtheria, meningitis, and the 1918 flu. I knew of typhoid through frightening evocations of “Typhoid Mary” (Mary Mallon).

Most of us were haunted by the specter of polio (poliomyelitis), also called “infantile paralysis,” a terrifying phrase. Unofficial neighborhood summer lockdowns sheltered children against polio. No matter how hot the weather, or how loudly my siblings and I complained, we were isolated, forbidden from entering the neighboring park and its sprinklers or the public pool to cool off at a time when air conditioning was rare. A neighbor encased in an iron lung to facilitate polio-impaired breathing ultimately died. A college classmate limped slightly, a remnant of childhood polio. President Franklin Delano Roosevelt was also crippled by polio, even as he hid this disability. March of Dimes fundraising kept polio in the forefront. Movie theaters often stopped films in the middle, the lights turned on, and containers were distributed to collect money for the March of Dimes—a dramatic polio reminder at a time when films were the major form of public entertainment available to us.

A man in a suit and glasses sits in a wheelchair, a fluffy black dog in his lap, and smiles down at a young child standing next to him. They are on an outdoor porch.
Credit: FDR Library 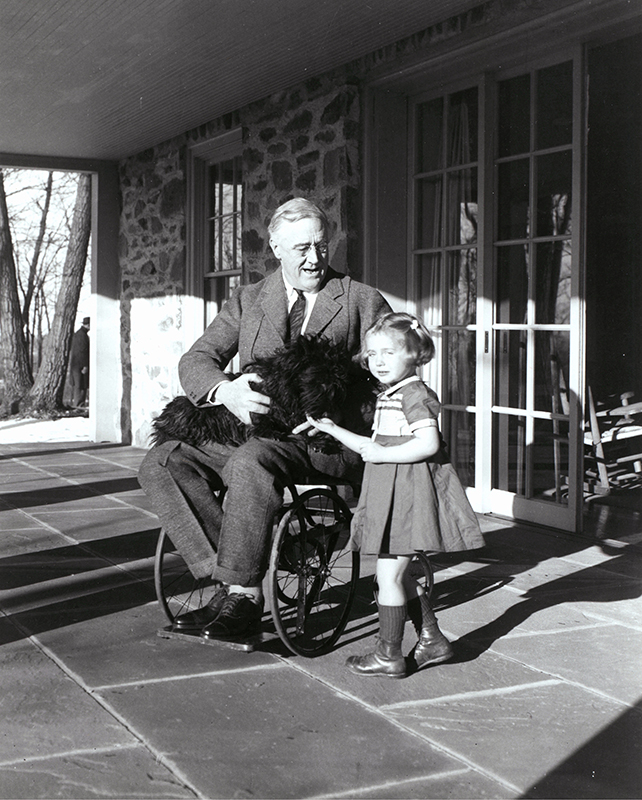 Franklin D. Roosevelt in his wheelchair on the porch at Top Cottage in Hyde Park, NY with Ruth Bie and [FDR’s dog] Fala. February 1941.

We relived the threat of these infectious diseases as we raised our own children. Aside from the worry, I remember wanting to tear my hair out when my sons had chickenpox, trying to keep them from scratching their painful rash, fearing that it might become infected or leave a scar. One son nearly died when he was one and a half: chickenpox, then an accidental hot coffee burn, and then hospitalized with pneumonia—one of the hardest periods of my life.

Vaccines conquered many of these diseases during my lifetime. Inoculations have a long history. Smallpox variolation (rubbing smallpox pustules into skin scratches or inhaling them) was used in China and India, perhaps as early as the first millennium but certainly by the 1500–1600s. During the 1721 severe Boston smallpox epidemic, the Puritan minister and intellectual figure Cotton Mather (1663–1728) learned from Onesimus, his enslaved West African, that West Africans were protected from smallpox through variolation. After learning the same from other enslaved West Africans and reading of similar methods being used in Turkey, Mather began to advocate using inoculation in Boston—advocacy that encountered both support and opposition. Confronting a 90 percent troop mortality rate from diseases, George Washington mandated smallpox variolation for Continental troops in 1777, a controversial decision but one that was effective in controlling smallpox. British physician Edward Jenner substituted cowpox (possibly horsepox) for smallpox variolation in 1796, a process replaced by a vaccine in the 1800s. Vaccinated for smallpox as a child, I wore the vaccine scar almost like a badge of honor: a mark on my upper left arm that also helped me distinguish my left from my right side when I was very young. The World Health Organization vaccination campaign to rid the world of smallpox was successful in 1980, when I was in my forties.

Other vaccines were developed after smallpox. Vaccines against diphtheria, cholera, rabies, and typhoid were developed in the late nineteenth century, followed by whooping cough (pertussis) in 1915, and yellow fever in 1935. The combined DPT (diphtheria, pertussis, and tetanus) became available in the United States in 1949, when I was 12. The Salk polio vaccine was approved in the United States in 1955, followed by the Sabin vaccine in 1961. Vaccines against rubella were authorized in 1963, mumps in 1967, meningitis in 1967, and the combined measles, mumps, rubella (MMR) in 1971, and chickenpox in 1995.

As soon as was possible I was vaccinated against most of these diseases and had my children vaccinated as well, not because of mandates to attend school, but because it made sense to avoid the painful, disabling, and sometimes fatal diseases of my youth. Because of its potential impact, polio was especially relevant. In my early twenties when the Salk vaccine became available, I rushed, like many agemates, to get the vaccine. Jonas Salk became a national hero, lauded by President Eisenhower and given a Time Magazine cover story. To his credit Salk never patented his vaccine, wanting it freely available globally, and when questioned, responded, “Could you patent the sun?” After the Sabin vaccine was developed, I quickly obtained that as well. Vaccination campaigns eliminated polio in the Americas by 1994.

The advent of public access to penicillin in the early to mid-1940s strengthened public confidence in medical knowledge. This first antibiotic ushered in a series of “miracle drugs” that cured once deadly diseases and saved millions of lives. Stricken with bacterial pneumonia (as well as other bacterial diseases), I was quickly cured through antibiotics, unlike my mother who almost died from her youthful bout. Younger generations, on the other hand, are more likely to take antibiotics for granted, while they now confront problems of antibiotic resistance.
Anyone born in the United States before approximately the 1970s would have personally encountered many of these infectious diseases and the successful role of vaccines and antibiotics in their elimination and cure. If we assume that children become more aware of their larger social environment when they are about 15 years of age, this population today would be older than 65 years. While seniors tend to be less involved with the social media that transmit anti-vaccine messages, their direct experience of suffering through these diseases and the successful role of medicine in eliminating them is a far more potent teacher than abstract knowledge or propaganda. Younger Americans are far less likely to even be aware of the diseases, a strange twist in which success has lessened support for vaccinations.

My experiences in the United States were further heightened by research in the Peruvian Andes, begun in 1966. Child deaths were common, children under five constituting 50.1 percent of the total number of deaths between 1955 and 1985. Many of these deaths would not have taken place if toilets, potable water, sanitation, and adequate medical care and vaccines were readily available, another experience (along with my knowledge of the role of infectious disease in human history) that made me even more amenable to vaccines and other medical interventions.

Despite the proven success of vaccines, opposition to them also has a long history. As early as the nineteenth century, anti-vaccination leagues in England and the United States sprang up, opposed to Jenner’s smallpox variolation on religious and sanitary grounds, as well as opposition to mandatory vaccinations because they offended personal liberty and targeted working-class citizens. Similar opposition developed against other vaccines during my lifetime, but anti-vaccine campaigns never seemed as widespread when I was young, compared to today.

Regional politics have also played a role in vaccine opposition. During early 1970s fieldwork in Peru, a virulent newspaper campaign accused a group of young teenagers, sent by a Texas Christian group to administer childhood vaccines, of working secretly to implement American policy designed to make children infertile, thereby limiting Peru’s population size, considered a source of the country’s strength. The Peruvian government asked the teens to leave for their safety.

A woman wearing white scrubs and shoes smiles down at a man in large cylindrical machine. Only his head is visible and there are a number of windows on the machine, as well as a pressure gauge.
Credit: CDC 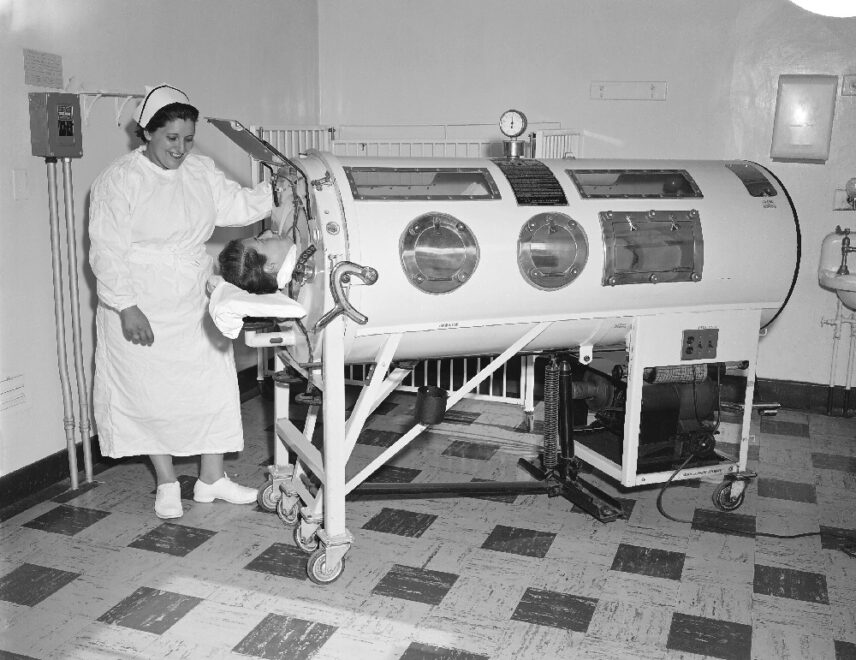 This historic 1960 photograph depicted a nurse caring for a victim of a Rhode Island polio epidemic, who was inside an Emerson respirator, also sometimes referred to as an iron lung machine. Devices like these, were used by polio patients, whose ability to breath thwarted due to paralysis of those muscles needed to complete the acts of inhalation and exhalation.

I am viscerally familiar with the dangers of an unvaccinated world, but that experience and my consequent predisposition to accept vaccines lay semiconscious, just below the surface—until I had a discussion with my son about differential vaccine hesitancy and acceptance. Like the fish unaware of the water in which they swim until there is some disturbance, many of the underlying reasons for COVID vaccine acceptance (and opposition) lie among the many unconscious dispositions through which we organize our lives. After a lifetime encountering infectious disease and vaccine efficacy, as well as antibiotic and other medical successes, my wife and I got the COVID vaccine once we understood that the available vaccines were safe and effective, never contemplating not getting them—and many of our agemates probably did the same.

To combat vaccine hesitancy, perhaps we might better publicize the role of vaccines in conquering infectious disease, employing personal experience, rather than attacking the unvaccinated as ignorant. This approach might not be effective with militant anti-vaxxers (motivated by ideological, political, and commercial interests), but it just might be successful with the larger numbers of the vaccine hesitant. To cite the old saw, honey attracts more flies than vinegar!

William P. Mitchell, former ASA President, is Emeritus Freed Foundation Professor in Anthropology at Monmouth University. His long-term research in the Peruvian Andes, begun in 1965, focuses on the ecological, economic and social forces underlying the profound social changes in Perú.