Witnessing “Zero Tolerance” at the Border

With what Ruth Behar refers to as ambivalent connections to our one-time homelands, we arrived at the United States courthouse in downtown El Paso, Texas, on a hot afternoon and witnessed the Trump Administration’s “zero tolerance” policies in action. While the border wall he promised has yet to be constructed, legal barriers to immigration and asylum are being built, brick by heavy brick, across a variety of agencies. President Barack Obama spearheaded the securitization of borders and localized the criminalization of migration and migrants. He authorized the most muscular enforcement of immigration laws in US history, earning him the title of “deporter in chief,” but the current Administration’s practices have added new layers of injustice and cruelty.

“Zero tolerance” mandates that federal prosecutors prioritize criminal prosecutions of immigration offenses. This mandate sets up legal frameworks that justify prolonged detention and the horrendous act of family separation and jailing of children. These practices operate on a colonial logic that reverberates back to slavery, the ripping of Native families from their homelands, and taking children away from parents.

The El Paso, Texas–Ciudad Juárez, Mexico border is a site where the frightening new realities of zero tolerance are palpable and part of everyday life. Each day, hundreds of immigrants are ushered into courtrooms, where they plead guilty to violating federal immigration law, and they are sent to detention centers or deported en masse. What we witnessed the day we attended immigration court proceedings was a life—a human life—in chains: a life in chains that parallels the migrant deaths occurring in what Rosas described in 2012 as “killing desserts” as a result of “prevention through deterrence,” a series of border patrol campaigns that drive migrants into dangerous crossings in remote areas along the Sonora-Arizona border. Some risk crossing through sewer tunnels. 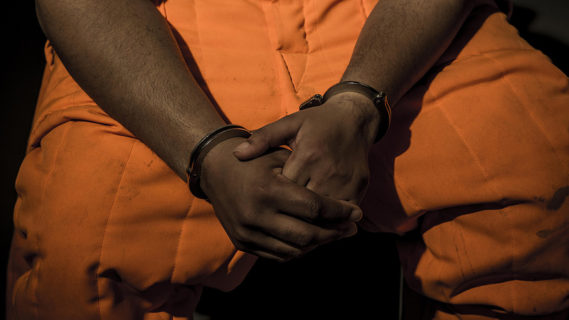 Zero tolerance, meanwhile, punishes undocumented migrants who have been caught attempting to cross the US-Mexico border. The intention is to deepen and extend “prevention through deterrence” through a hazing process of detaining migrants in chilly holding cells, protracted detention in private prisons and camps, and now, taking children away from parents, and in some cases, deporting parents without their children. The political goal is to dissuade migrants from coming to the United States by making an already harrowing journey even more risky and traumatic. The deepening criminalization of migration under the guise of border security constitutes necropolitical state policies. This situation demands urgent anthropological interventions.

Here, we describe acts of witnessing as a possible intervention. We witnessed the immigration proceedings and the oppression of a young man that as far as he knew was being prosecuted for unlawfully re-entering the United States. His face and body were adorned so profusely with ink that his brown skin was rendered green and black, his expressions quite literally painted over with tattoos. We saw him sitting on one side of the room next to other prisoners, his furtive glances vigilantly scanning the courtroom. The public defender arrived, a woman with a black ponytail and striped pantsuit. She greeted her peers, then made her way directly to him. Taking the seat next to the chained youth, she squared her shoulders toward him, leaned in and spoke softly, “¿Cómo estás…?” (How are you doing?) The ink broke. His countenance completely changed. A smile flashed through the paint, and he sat upright. He responded to her in the same hushed tone.

The judge called him to the stand. His stride to the bench sounded awkward; the chains that bound his body scraped and clanked. His wrists were shackled together at his belly; chains bound his ankles; another gripped his waist. An interpreter sat in the corner, her headset linked to those of the defendant and judge. The young man’s headset looked like another contraption of bondage, bracing his chin and reaching up to his ears and mouth. He listened to the interpreter’s instructions from the judge and responded in Spanish. His attorney gently removed one earpiece to speak to him. This small act of intimacy shifted the dehumanizing atmosphere of the courtroom. His humanity broke through his mask of tattoos as he spoke with his attorney. “She’s probably the last person who will talk with him like that for a while,” observed Martínez-Cano.

After some preliminaries, the judge stated: “Unauthorized entry into the United States is a misdemeanor. Re-entry is a felony, Santos. Is that your true and correct name? Unlawful re-entry. How do you plead?” “No culpable” (Not guilty), he responded. Santos was ordered to return to his cell for an unspecified time before his trial. The length of his waiting period is uncertain. Who in that interim—and in that jail annex—would treat him with the same degree of humanity that his attorney had afforded him in court?

Zero tolerance marks the latest moment in which anthropologists must adopt a more radical stance than observation with the term’s residues of scientific neutrality. Asale Angel-Ajani in Expert Witness: Notes Toward Revisiting the Politics of Listening tells us that for “ethnographers who work with and write about survivors of many forms of violence and repression, the figure of the witness becomes a powerful means through which to authorize and legitimize the painful and often devastating histories which we anthropologists are allowed to hear, and which we sometimes see with our own eyes.”

Rosas and many other scholars regularly testify on behalf of people in immigration court. As critically engaged and committed anthropologists and transfronterizos from the El Paso–Ciudad Juárez region (individuals whose lived experience takes place on both sides of a border), witnessing the blows and the wounds that zero tolerance inflicts in our homeland carries weight and depth that is especially harrowing. When everything in the courtroom is cold and measured, and families are the targets of inhumane policies, engaged ethnography becomes paramount. Witnessing is one practice in a series of possible interventions. These words, this record, can preserve or at least, materialize a modicum of Santos’s humanity, even as he is led away in chains through a system designed to strip him of that humanity.

Gilberto Rosas is an associate professor in the Department of Anthropology and the Department of Latina/o Studies at the University of Illinois at Urbana Champaign. His award-winning book came out in the summer 2012 and is titled Barrio Libre: Criminalizing States and Delinquent Refusals of the New Frontier. He is active in the Sanctuary movement both locally and nationally, and regularly gives expert testimony on behalf of asylum seekers in removal proceedings.

Carlos Martínez-Cano is a PhD candidate at the University of Pennsylvania. His research interests include activist anthropology, the informal learning of non-dominant youth, and critical ethnographic methodologies.

Almita Miranda and Andrea Bolivar are contributing editors for the Association of Latina and Latino Anthropologists.