A Conference in Puerto Rico after Hurricane Maria?

In preparation for the upcoming conference Positive Futures, Sarah Molinari spoke with Yarimar Bonilla, associate professor of anthropology and Caribbean studies at Rutgers University, who will be giving the conference keynote address. Bonilla reflects on Puerto Rico as a “landscape of ruin” one year after Hurricane Maria and brings nuance to the conference theme positive futures.

Sarah Molinari: You just finished a new edited volume Aftershocks of Disaster, in which you suggest that Hurricane Maria might itself best be considered a kind of “aftershock.” What do you mean by that, and how do you view the idea of “aftershocks” sixteen months after the hurricane?

Yarimar Bonilla: The concept of the aftershock is usually used in relation to earthquakes to talk about the later shocks that people endure. And so, I began to use the concept of aftershocks to think about the temporality of these events and how difficult it is to mark their beginning or their end. In the case of Puerto Rico after Maria, we now know that most of the deaths produced by the storm were not caused by the wind and the rain, but rather by the subsequent months without electricity, the contaminated water that was consumed, and the failures of infrastructure. When each of these events happened, it was like an additional shock that people felt—an additional jostle to the collective body.

But I also began to think about how Maria itself was not the beginning of the disaster, because we had already gone through nearly two decades of economic recession. After Maria you would see all these buildings that were boarded up and you didn’t know if they were boarded up because of the storm or if they had already been boarded up because of the economic crisis, which is itself piled upon a long legacy of colonial extraction. For example, next to what will be the conference site, visitors will see the ruins of a beautiful Art Deco structure shaped like a cruise ship. This used to be the Normandie Hotel, which originally opened in the 1940s and was where lavish concerts and events used to be held. I know this because I used to work in the gift shop when I was in college! Despite being a historic landmark, it has for over a decade now sat vacant and is deteriorated, full of graffiti, and crumbling. To me, it is a perfect symbol of the landscape of ruin that characterizes Puerto Rico right now.

Many people were appalled by Trump’s remarks and actions after the storm, but Trump is just the contemporary face of over a century of colonial rule. Few talked about the fact that Maria happened during the hundredth anniversary of US citizenship for Puerto Ricans. Some consider this to be a non-consensual citizenship—indeed there is a history of activists renouncing it. Others see it as a second-class citizenship and a false promise of inclusion. The storm cannot be disconnected from that longer history of colonial citizenship, and the many shocks that Puerto Ricans have had to endure during both American and Spanish rule.

SM: The aim of the 2019 SANA/SUNTA conference is to explore the “spaces, practices, thoughts, and senses through which Positive Futures are elaborated, sustained, improved or reworked.” How does this relate to your own work? What would a “positive future” look like for Puerto Rico and is this even possible to imagine?

YB: Before this interview, I actually looked up “positive” in the dictionary! The entry included taking an optimistic stance, and it also mentioned that being positive implied confidence and certainty. All of that is really difficult to find in Puerto Rico right now. (Except perhaps among the bondholders since the price of the bonds have gone up since Hurricane Maria!)

I think that one of the problems facing Puerto Rico right now is precisely a lack of optimism about the future. There is a feeling of general malaise—a kind of “stuckness” economically but also politically. Scholars such as David Scott have written about the general sense of a “stalled present” that is felt in the Caribbean and beyond. I describe this in my first book as a feeling of “disenchantment” with contemporary political formulas. Politically, in this moment, certain futures have been foreclosed but new political options have yet to materialize. 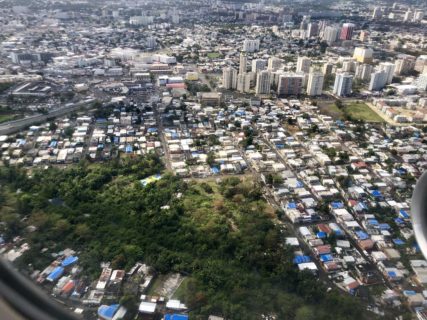 After the debt crisis, the denial of our ability to even declare bankruptcy, the failures of FEMA during Maria, the mismanagement of aid, and the constant affirmations by the US government that Puerto Rican lives don’t matter—most recently manifested in the attempts to channel hurricane recovery funds toward the border wall—there is a real sense of uncertainty, not just about the future but even about the present and I definitely think that optimism is hard to find.

But that doesn’t mean that everyone is in deep despair or that there isn’t any political action. So maybe Puerto Rico can be a productive site from which to rethink this idea of a modernist progression toward a better future. How to think and act politically when optimism, confidence, and certainty are all in short supply is a question that many have to face, not just in Puerto Rico, but beyond.

SM: What does it mean to have an academic conference in Puerto Rico?

YB: Well, it’s interesting because already within anthropology and beyond there’s been a lot of discussion and debate about how to rethink the conference model. Not just in terms of rethinking the stale format of 15-minute presentations one after the other where no one really listens to each other, but also the questioning of the cost of these gatherings. What are the implications for precarious academics and what of the carbon footprint? I know other organizations have been pushing towards virtual conferencing and exploring other models. I myself am a fan of the retreat model—a smaller group of people getting together to really work things out on site rather than just showing up to present work that’s already done.

However, there can still be something valuable in gathering for a conference. For example, in the Caribbean Studies Association every year we travel to a different Caribbean society and we really try to use those conferences to engage directly with places that many of us teach about in our classrooms but have never visited. There is a real effort to meet local scholars, attend the plenaries about local issues, and to visit cultural institutions and get to know the work of artists, film-makers, and intellectuals that don’t necessarily have international exposure.

In the case of the SANA/SUNTA conference, I think it could mean a lot for scholars to come to Puerto Rico—a place that often falls through the cracks of both American Studies and Latin American/Caribbean Studies, and which is not necessarily thought about as a site from which to think about the United States or to speculate about American futures.

Our primary role as public scholars is often in the classroom, so this is an important opportunity to think about how we can incorporate lessons about US imperialism, and help clarify the fact that the US is an imperial archipelago that extends far beyond the North American continent. I think for people who maybe don’t teach these themes—because they work in a different part of the world or on another set of issues—it would be a good challenge for them to try to move beyond the conference site and explore something about this part of the United States that is often invisibilized and not understood or thought about, and to think more about how they can help break the silence that exists in US classrooms around Puerto Rico.

To me this is no small matter, because I strongly believe that a great part of what enables US policy towards Puerto Rico—and its other territories such as the Virgin Islands, Guam, and Samoa—is the structural silence around these places in academic curricula. A central task of an anthropology of the United States should thus be to break with that silence and help both students and a general public better understand why the United States has colonies across the globe, and why it seeks to silence this basic fact. So I think that if people come here and are later able to teach about Puerto Rico in a different way and are able to help young people—who at least in my classrooms show up not knowing anything about US colonialism—I think that would be a positive outcome and a positive future.

Sarah Molinari is a PhD candidate in anthropology at the CUNY Graduate Center and a visiting researcher at the Institute of Caribbean Studies at the University of Puerto Rico. Sarah’s research focuses on the politics of debt resistance and hurricane recovery in Puerto Rico. She is a co-creator of the Puerto Rico Syllabus. @SarahMolinari

Yarimar Bonilla is a political anthropologist specializing in questions of sovereignty, citizenship, and race across the Americas. Yarimar was named a 2018 Carnegie Fellow for her research on the political, economic, and social aftermath of hurricane Maria in Puerto Rico. She is the founder of the Puerto Rico Syllabus. @YarimarBonilla