A Fieldpoem for World Poetry Day

How we practice and write ethnography matters. Poetry is one way to understand what it feels like to be human at a particular time and place.

The difference between a poem and an ethnographic poem is fieldwork. My ethnographic poems are written based on my field data, and sometimes as part of my field methods: they are attentive to the qualia of social life and the complexities of human experience as encountered in fieldwork. Compared to my other poems, my ethnographic poems are generally more constrained in tone, though they lack formal structure. They read as more focused, and are often shorter, bracketed by the small, careless gestures of daily living. I like to think that my fieldwork can be seen through my ethnographic poems like smooth rocks under the fast-flowing water of a creek. The poem is the current, liquid and moving. 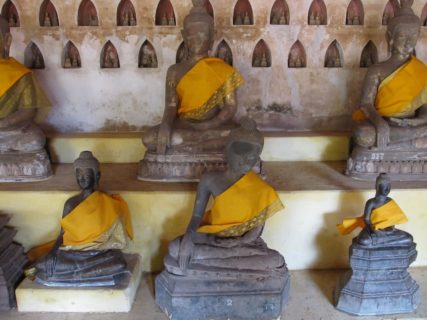 Buddha statues at Wat Sisaket in Vientiane showing the earth-touching mudra (sacred hand gesture). The Buddha touches the ground to ask the earth to bear witness to his victory over suffering. Leah Zani

During my first field study with explosives clearance teams in Laos in 2012, I created the word “fieldpoem” to describe my process of poetic creation in dialogue with my interlocutors and sites, ethics protocols, and social theories. A fieldpoem is both poetry and research; I write the poem in order to better understand society, culture, and human experience. When part of an ethnographic study, poetry is a way that I recognize and analyze those aspects of experience that have rhythm and resonance. When I am writing up research, I use the tools of poetry to add meaning to my ethnography.

I developed fieldpoetry intuitively, out of my own personal experiences with data collection, analysis, and representation: I wasn’t only writing fieldnotes, but also fieldpoems. As a method, poetry requires similar forms of prior training and planning as any other field method. Poetry is not easy, though it can be elegant. I engage in poetry the same way that I engage in interviews; I plan ahead, prepared with questions and prompts, scheduled to meet at a certain time or place, and arrive notebook and pencil in hand. I write my ethnographic poems in the same notebook as my interview notes, observations, and other research writings. Like being in an interview, I know when I am in a poem. Fieldpoems have recognizable borders, textures, and turns of phrase: a lozenge of light moving across a person’s face; a repeated allusion in conversation; a stack of live crabs on a scale, too many legs; a child disappearing into the dark doorway of a house. Poems, more so than prose, often resemble everyday speech and experience in their playfulness, rhythm, sonics, and allusions. The signs are always there, if I am looking for them.

I know a poem when I am inside it: I’m going through an archive of digital photos from an assistance program for victims of explosive ordnance, modeling how an aid worker might use this database to create their reports. An analyst, my friend and research partner, is scrolling through the images, pointing out photos that she’s used in her reports to donors. “This one is quite good. It made quite a splash—now you see this picture everywhere in the media. I don’t know who took it.” She’s pointing at an image of an older man sitting on his porch steps, one leg a prosthetic made out of a defused, repurposed bomb case. These images of survivors of bomb explosions circulate among aid workers, donors, and government partners. Slowly, I realize that none of these images have sources—no dates, no named photographers, no named subjects, no notes on usage or permissions. The next image: a young man on a canvas hospital stretcher, unconscious, skin nearly white but dusted with black powder. His body is totally relaxed, as if sleeping. The photo ends at his hips, at the shreds of his green trousers. Little flecks of blood darken his clothes. “He’s just about to go into surgery. Almost certainly he lost that leg.”

There is a feeling of experience condensing, viscous and sticky. Poems are made of this excess, the residue of experience. This poetic protomaterial will stay with me for hours, days, weeks until I write it down. I am sensitive to knowing that something is too complex for a straight line, one word right after another. Words like enemy or accident don’t survive this condensing awareness; they’re a burnt smudge on the bottom of the flask. Poetry is one way to make words strange, to distill everyday words until they are unrecognizable, and then to carefully write them back into familiarity. Sometimes I let this protomaterial mature for a few weeks on purpose, trusting that the poem will only get better the longer it stays wordless:

raised thumb and index finger of his left hand
touch at their tips: the circle of existence

five fingers of his right hand touch
the ground: calling the earth to witness
victory over suffering

his hands are small mute mouths
in a sleeping face, eyes closed
faintly spattered with blood

a burst of black powder
and gently he falls, softening
into the white-hot flash

Everyone in this poem is innocent, nameless as bystanders. I want the poem to maintain their innocence—to not give in to the specifics of victimhood. The first word is a reference to Eva Hayward’s concept of “fingeryeyes” (2010), a method of attention whereby scientists conflate looking with touching. I use the concept to think through what these aid workers are doing when they circulate anonymous photos of extreme violence. The hands in the poem are describing mudras, or sacred hand gestures, of Theravada Buddhist iconography. Bitumen of Judea is a typical flash powder, an explosive, used in early photography.

Fieldpoetry arises out of my personal investment in fieldwork, attitude in the world, interest in arts-based methods, and relationships with my interlocutors. Other poets and ethnographer-poets have different approaches to method and craft, with or without an investment in poetry as field method. Each ethnographic poet has their own ars poetica: Adrie Kusserow’s critical anthropoetry; Renato Rosaldo’s explorations of anthropoesia; and Nomi Stone’s use of sonics, to name only a few. Not all poems that anthropologists write are fieldpoems, and not all fieldpoems are written by anthropologists. Practicing poets such as Morgan Parker and Rachel Richardson use their training in anthropology to craft poems with social relevance, rooted in everyday life, without being explicitly ethnographic. My fieldpoetry has matured since my early fieldwork—prompting a number of academic presentations, collaborations, and a chapter in my forthcoming book Bomb Children; and informing my work as the poetry editor at Anthropology and Humanism.

Ethnography is both a method and genre of writing. How we write ethnography (whether nonfiction, fiction, poetry, memoir, stage play, mixed-genre, etc.) matters a great deal to the practice of anthropology as a humanist science. At its best, ethnographic poetry brings us closer to what it feels like to live life in a particular place and time. Written as an element of fieldwork, each poem is a keyhole through which the reader can see a larger world. The difference between a poem and an ethnographic poem is fieldwork.

Leah Zani is poetry editor at Anthropology and Humanism, the journal of the Society for Humanistic Anthropology, and serves on the Society’s Poetry Prize Committee. She researches and writes as a Fellow of the Social Science Research Network at the University of California, Irvine. She welcomes comments at [email protected].