A Flavor of Human Feeling in Beijing

Aging residents of a Beijing neighborhood give new value to old and used household objects, creating a community space rich with a feeling of belonging in an ever-changing city.

When entering the Guest Living Room (GLR) in a narrow hutong alleyway in Beijing’s old city, you would immediately find yourself encircled by glass cabinets crowded with colorful, outmoded stuff: old phones and video games, painted pigs’ knuckle bones that had once been used to play a game like jacks, collections of ration tickets from the 1950s through the 1980s, and candy wrappers from the 1970s. In the large main room extending behind this display, you might encounter a group of senior citizens chatting over tea or making crafts together. From time to time, tourists or visitors to the neighborhood are drawn inside by the items on display and exclaim that they haven’t seen something like that since they were a kid. How do outmoded objects come to have a renewed appeal to neighborhood residents and tourists, old and young alike, rather than being seen as junk? By giving value to otherwise valueless objects, regulars and visitors at the GLR produced a sense of warmth and hominess in the midst of disorientation and disconnection in an ever-changing urban environment.

Shelves and cabinets, bedecked in old telephones, storage tins, televisions, clocks, thermoses, books, and other items are surrounded by brightly colored hanging paper décor. To the right of the frame is a plant, close to a large window that is partially obscured by the many objects in the photo.
Credit: Hanna Pickwell 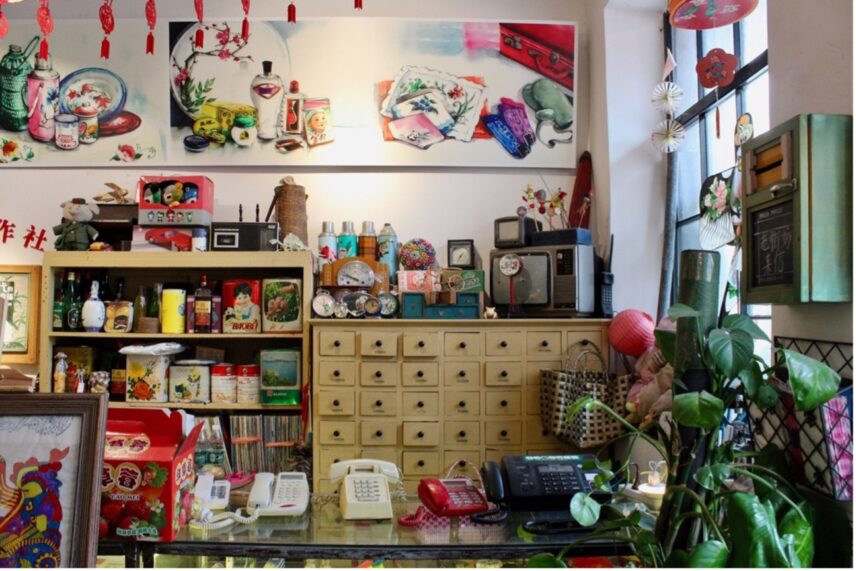 One part of the collection, comprised of objects from neighbors’ homes, at the Guest Living Room.

Although the GLR somewhat resembled a shop or a museum with its displayed collection of interesting objects, it was more akin to a community center where aging neighborhood residents would come to socialize. I had never visited anywhere like it. Everything in the space had been brought to the GLR by regulars there. They told me that when the space opened in 2017, the founder had appointed it with old furniture, including the glass cabinet they recognized from 1980s and 1990s shops, which displayed a few items and had plenty of space for more. Over the next two years, community members filled every surface and empty stretch of wall with old things they no longer had a use for. As things accumulated there, the GLR became a metonymic extension of the neighbors’ homes. The everyday objects they had once lived with now intermingled on the shelves, sometimes receding into the background as ambient décor, and sometimes drawing attention to prompt commentary or stimulate personal or shared memories.

Some of the items remained in use. More than a dozen drinking vessels, each belonging to a different GLR regular, were kept clustered together in a tray, ready to be used when their owners stopped by, indexing the many cups of tea they had shared and would share together in the future. Even marks of inhabitation like scraps of food, the resident cat, or excess items stacked tightly into corners made the space feel inviting to the neighbors, who referred to it as a second home or a niang jia—a woman’s natal family home that she would move away from after marriage, but that she could return to intermittently and always feel like she belonged. In his study of a London neighborhood, Daniel Miller found that lives rich in relationships with material things were often also the richest in their relationships with people, since the routines and patterns that built up around things provide comfort and stability. This was also the case at the GLR, where objects were not passive decorations or mere clutter; they were integral to the sociality that unfolded in the space.

A neat pile of clementine fruit peels and leaves are gathered at the center of the frame, on a brown table. There is a second pile of peels and a few peanut shells in the left foreground. In the background, a blurry television set can be seen on a table crowded with indistinct objects next to a glass display cabinet and a wooden bureau. There are banners, and décor hanging on the wall behind, leaving very little white wall showing through.
Credit: Hanna Pickwell 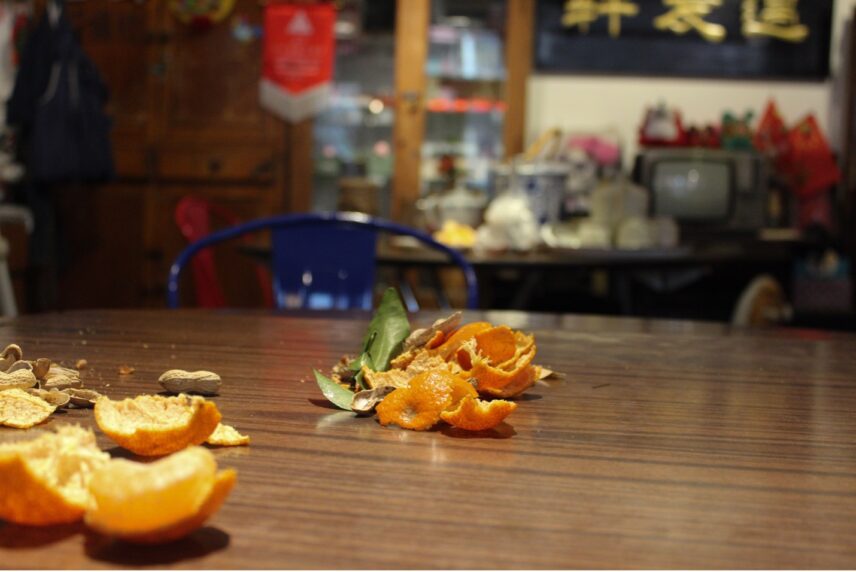 Fruit and nut peels on a table at the GLR.

A staff member told me that neighbors were eager to donate excess things to the GLR; they had limited space in their small homes, and besides, rapid development and increasing financial resources had produced an appetite for new, modern styles of home décor that didn’t match the aesthetic of old things. According to him, the things that people tended to donate had “no value” (meiyou jiazhi), and were not even worth 10 kuai (approximately $1.50 USD). Even junk collectors wouldn’t want the stuff in the GLR. But these things must have some worth, I replied, since the neighbors had brought them to the GLR rather than simply throwing them away. He conceded, smiling, that the stuff in the GLR did give off renqingweir—a “flavor of human feeling.” I often heard regulars and visitors use this word, which combines the warm emotions of a personal relationship (renqing) with the sensation of smell or taste (weir), to describe GLR’s atmosphere.

The staffer’s simultaneous denial and acknowledgement of the value of the old, used things in the GLR—that they had no exchange or monetary value and yet gave off this homey flavor of human feeling—resonates with contradictions I had been investigating through the changing value of secondhand commodities in post-socialist China. Everyday objects like old clocks, lamps, and basins which I had seen as junk on the street and or sold for next to nothing in secondhand markets a few years before are now framed in museums, public art, and on postage stamps as nostalgic heritage. Meanwhile, historic hutong neighborhoods like the one surrounding the GLR remain popular destinations for tourists seeking a unique Beijing atmosphere. How could it be that the same things were at once seen as valueless and also key to a place’s specificity and warmth?

The objects that accumulated in the GLR, then, told a complex story of value. It was true that most of the items populating the GLR lacked exchange value and use value in contemporary Beijing. The knuckle bones have been displaced by flashier plastic toys; ration tickets can no longer be exchanged for rice or cooking oil; even a beautiful quilt, handmade from fabric scraps fifty years ago, can no longer fit with the desirable aesthetic of a modern home. This quilt was made by the GLR founder’s aunt, who had considered throwing it out since it wasn’t being used. When her nephew installed it in the GLR as a door partition, the aunt was so pleased to know that it could be “useful” again.

Thrift and resourcefulness were especially important to the aging GLR regulars, who had lived through times when material plenty could not always be expected (see also artist Song Dong’s Waste Not). The oldest among them had been children during the scarcity of the Great Leap Forward; younger neighbors were born around the time of the Cultural Revolution, and grew up accustomed to rationing of food, cloth, and other essential resources, coming of age just as economic reforms began to marketize and globalize the Chinese economy. Regulars who had donated seemed delighted by the new uses their old things had found as décor and as instigators of interest or conversation. Spared from the rubbish heap, they could remain part of the social world (see Wang 2012).

A calico cat crouches inside a glass display case. On the glass shelf above her we can see an old video game, a tambourine, a jianzi—a toy that is meant to be kicked and passed between players—and other miscellaneous objects. On the same level of the cat are several balls, an abacus, a toy drum, and several wooden objects.
Credit: Hanna Pickwell 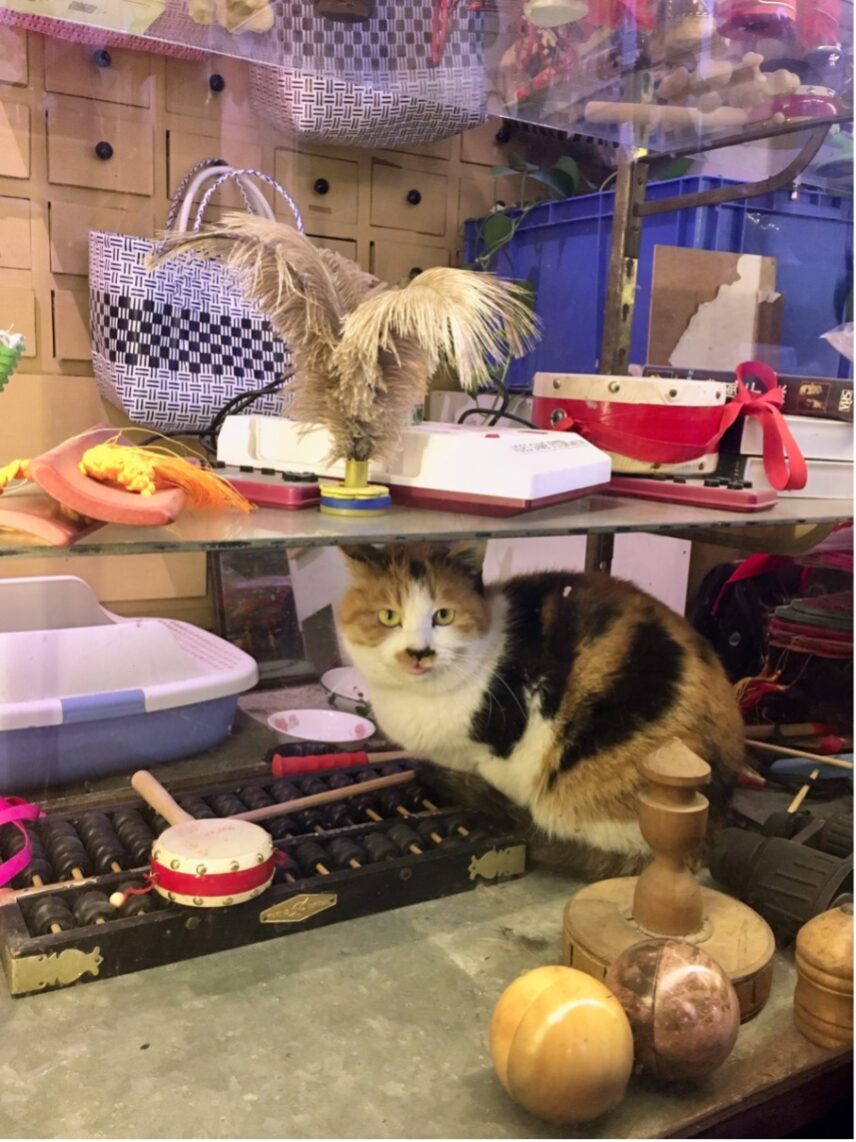 A cat crouches amongst the GLR’s collection in a display case.

The GLR collection also kept the past present. Younger tourists and students often had no idea what the objects filling the GLR had once been used for, and older regulars were eager to tell them about how these things once fit into their everyday lives, bridging generational difference. Moreover, China’s cities, and especially Beijing, have undergone accelerated material transformations that accompanied the dramatic political and social changes of the past century. Although they are now seen as rich with historical charm, hutong neighborhoods like this one have aging and inadequate infrastructure, and many were targeted for demolition in the 1990s and 2000s. They are now often redeveloped into more upscale versions of themselves, and purged of lower income residents, migrants and their small businesses, and unauthorized buildings. In this context, history and community feel continually at risk of being blasted away.

Perhaps it is no coincidence that I often heard renqingweir, that “flavor of human feeling” that evokes the sensory and emotional warmth of relationships, invoked to name what is often lost in the processes of rapid development and modernization. Brought together by a community of aging residents in a neighborhood that has seen its share of change in a rapidly changing city and society, the gathering of objects at the GLR was a stabilization of an atmosphere of renqingweir. Like the domestic objects in Miller’s research, collections do seem to have a special power of shoring up identity by externally objectifying the collector’s senses of self and of control in the world (Baudrillard 1996[1968], Stewart 1992). In this case, the collection was collectively authored. Like the collection itself, any “identity” or quality that the GLR helped to stabilize was not fixed but continually being altered and added to by community members. But the most dramatic change came when the GLR closed its doors due to the pandemic in early 2020. After months of uncertainty, the space was eventually permanently closed, and the collections were moved to into storage, where they will remain until a suitable place can be found. Renqingweir is indeed a fragile quality.

The mostly outmoded things, brought to the GLR from nearby homes, set the scene for a particular flavor of social life to unfurl there. Casual social drop-ins, collective meals, handicraft workshops, and holiday celebrations took shape organically in a space that felt like it belonged to the neighborhood regulars and where they felt they also belonged. The regulars shared the GLR, which they called a second home, with a diverse array of objects of little economic value that seemed to materialize the hominess and “inclusivity” (baorong) that they said set this place apart. The atmosphere of renqingweir, then, was produced both materially and socially, ineluctably linked to broader political, economic, and social contexts beyond the particular place where it was, however briefly, given space.

Hanna Pickwell is a PhD candidate in sociocultural anthropology at the University of Chicago. Her dissertation research on the social efficacies of used and outmoded commodities in China has been funded by the Wenner-Gren Foundation, Fulbright, and the China-US Scholars Program.