In megacity Lagos, old tires are turned into new resources—reclaimed, upcycled, and repaired.

End-of-Life tires (ELTs) are virtually ubiquitous in the streets of Lagos. They lie abandoned by the sides of roads and the banks of waterways or stockpiled in dumpsites away from the smarter suburbs. Nonbiodegradable, their resilience allows them to cling to the urban fabric before becoming breeding grounds for malarial mosquitos or fuel for smoke-laden fires. But a tire that has apparently reached the end of its useful existence may also be revived to take on new social and infrastructural life. As one Lagos resident told us, “In Nigeria, a tire never dies.” What seems like inert trash might actually be matter on the cusp of transformation, about to cross the fluid boundary between waste and well-being, refuse and resource.

Our British Academy-funded project Pneuma-city explores the numerous pathways that tires trace through the economy and ecology of Lagos—a city of around 20 million people that hosts some two million vehicles on its roads every day. Once detached from cars, buses, and lorries, tires may retain their shape but change their function, deployed as platforms for portable generators, stands for the display of market goods, or informal means of marking out space on road or beach. They may even be upcycled, re-formed into distinctive items of furniture or works of art that are encountered in galleries rather than gutters. In February 2022, Jumoke Olowookere, alias Jumoke OlowoWaste, opened Nigeria’s and possibly Africa’s first Waste Museum in the city of Ibadan. Transmogrified tires play a starring role in the museum’s depiction of the conversion of trash into tourist attraction, global commodity into unique object.

A black and white photo shows a man wearing an intricately patterned shirt and cap holding a tire and looking down at the bottom-inside rim. The tire is in the foreground, the shot capturing the man through the hole in the center of the tire.
Credit: Andrew Esiebo 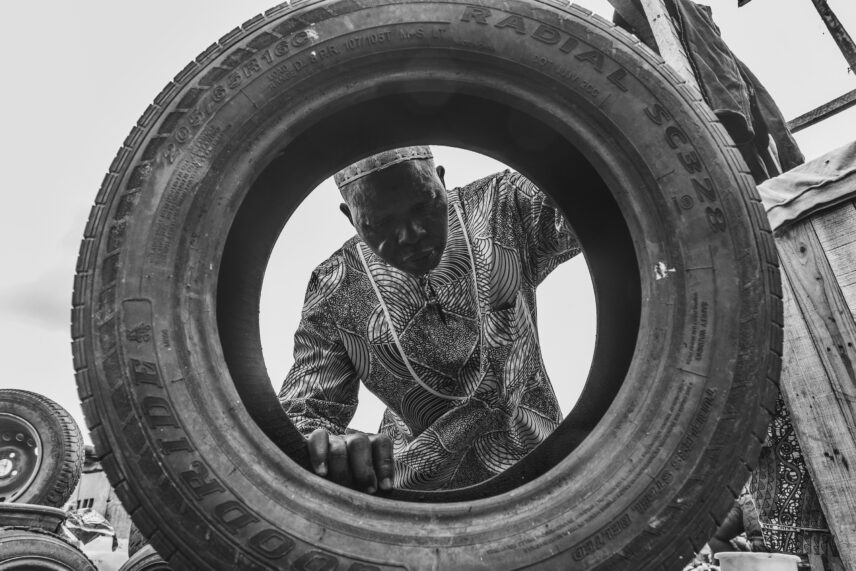 A vulcanizer in Mushin Lagos evaluating the validity of a used tire brought to him for repair.
A black and white photograph shows a young man in a soccer shirt removing a faulty tire from a wheel rim with a mount/demount iron tool. Behind the young man are stacks of tires and wheel rims.
Credit: Andrew Esiebo 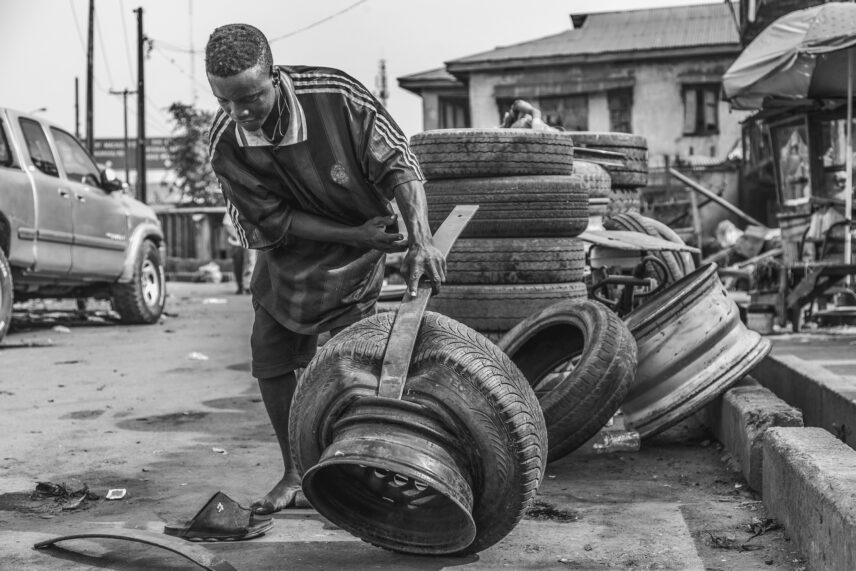 A vulcanizer in Mushin Lagos is using the mount/demount iron to remove a faulty tire for repair.

Tires may also take another turn in the circulating economy of the city, becoming ground into “crumbs” that—in a curious twist of fate—are used to produce the very asphalt roads along which the tires initially traveled. Or they may be carted away and burned—this time not in impromptu fires but as part of an industrial process changing tires into fuel, for instance providing energy for the Nigerian branch of multinational cement company Lafarge.

A black and white photo of a single waste tire advertising a roadside vulcanizing business hangs over a drain full of litter.
Credit: Andrew Esiebo 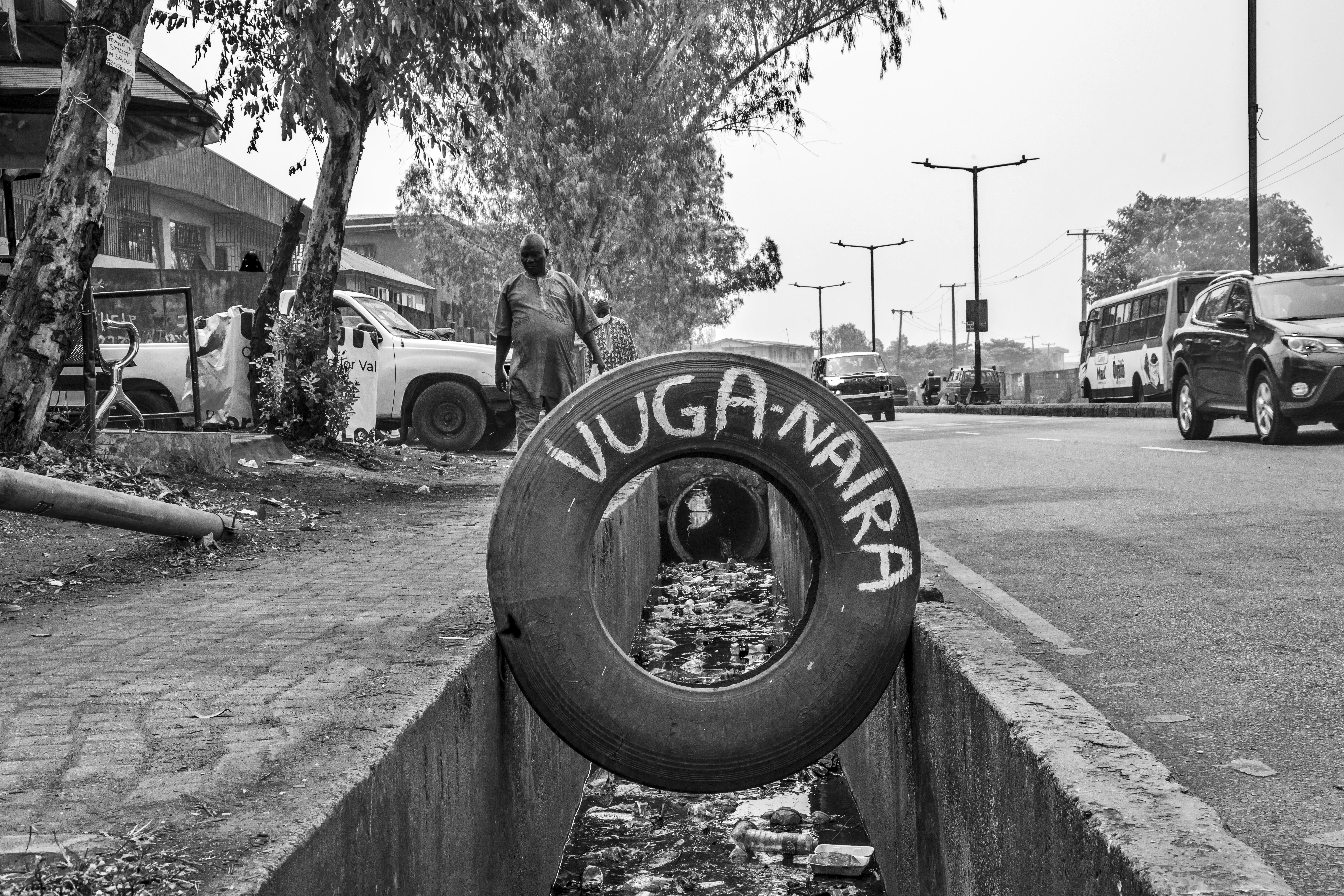 A waste tire advertises a vulcanizer’s business in the Iyana-Paja area of Lagos.
A black and white photo of a single waste tire in the foreground covering underground drainage while in the background are passersby, stationary motorbikes and moving traffic.
Credit: Andrew Esiebo 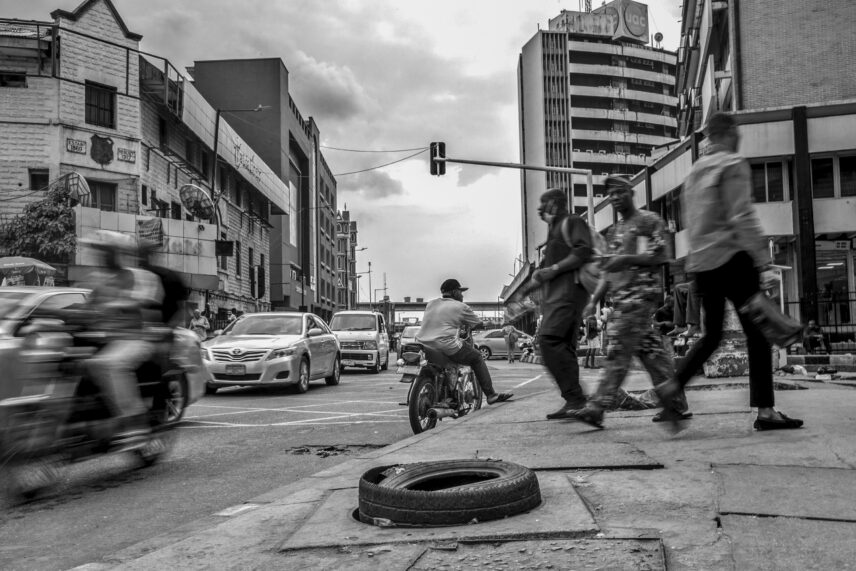 Waste tires are used to cover manholes to the underground drainage in the CMS (Church Missionary Society) area of Lagos Island.

As part of our project we are investigating the lives of those human figures who play a key role in prolonging a tire’s life or pronouncing its demise: the “vulcanizers” who labor by the sides of roads to inflate or repair tires, to restore and retread them, perhaps to take a tire that is tokunbo (secondhand/foreign-used), before determining that it can indeed be resold to ply the roads once more. As one vulcanizing “master” told us, to complete the necessary training a person needs both “a discipline and a dream.” Another claimed to be able to identify a tire—Dunlop, Michelin—by its smell, as if he were a connoisseur of rubber.

A black and white photo of two waste tires used as soccer goalposts in the middle foreground and large concrete columns supporting the flyover in the background.
Credit: Andrew Esiebo 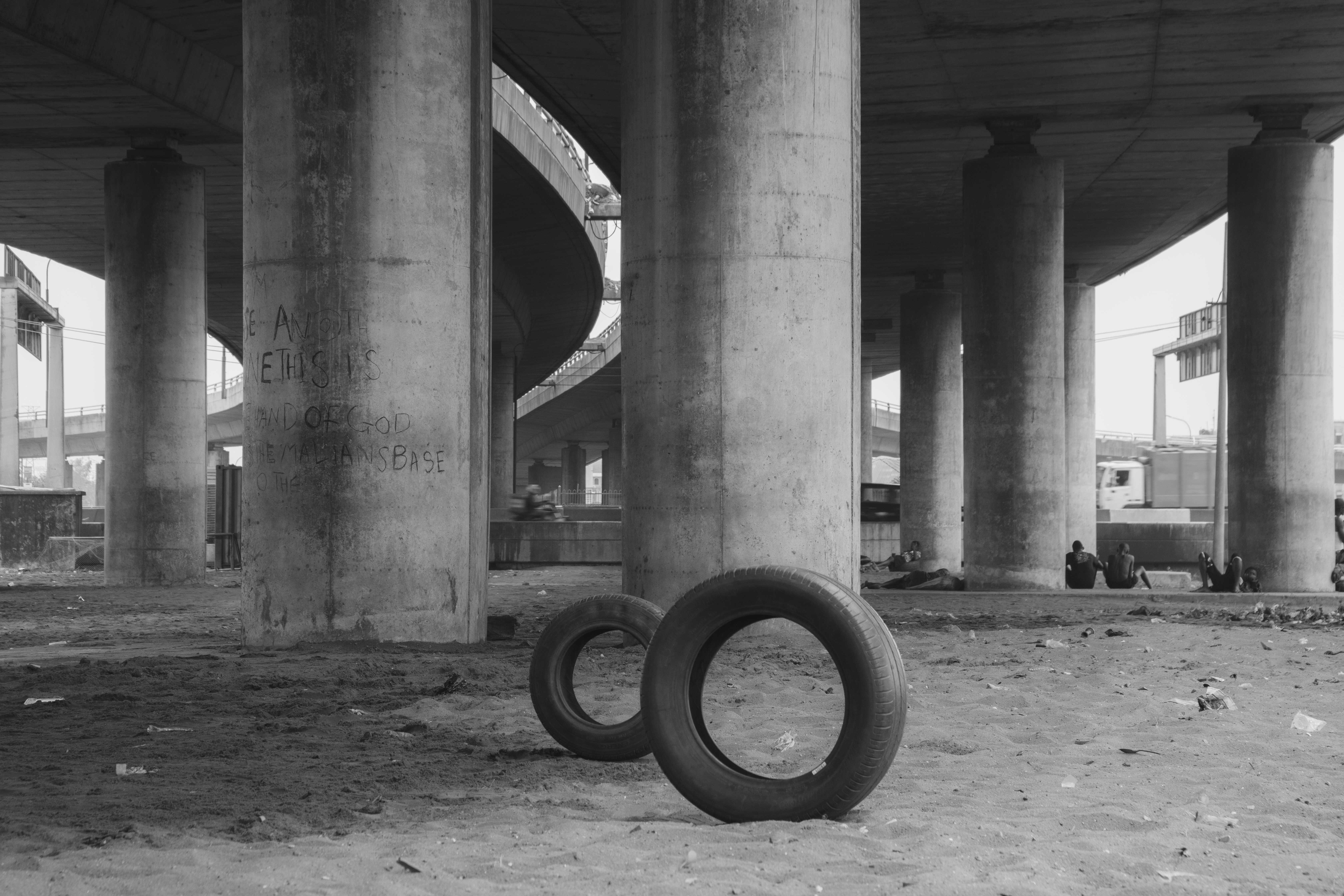 : Waste tires are deployed as goal posts during soccer games under a Lagos Island flyover. The public space is mainly used by young boys and men from local low- and middle-income neighborhoods.
A black and white photo of a man wearing a straw hat and standing in the front-left of a massive heap of waste tires in the foreground while in the background are parked pickup trucks and corrugated iron stores.
Credit: Andrew Esiebo 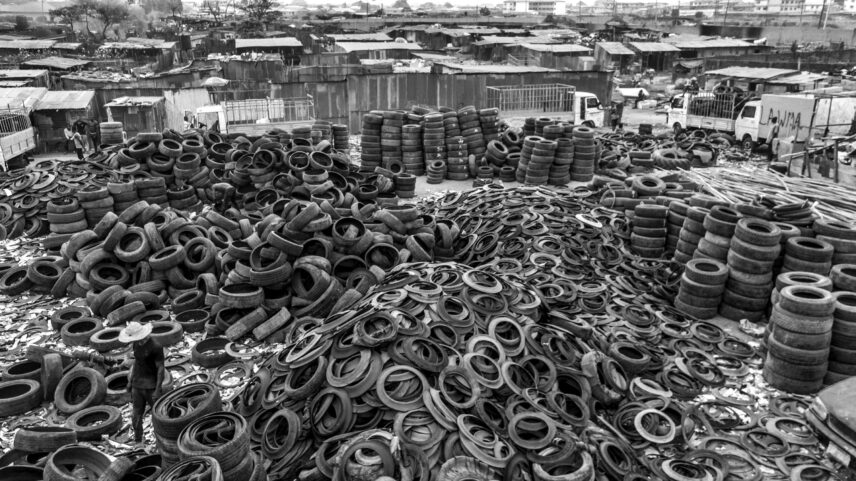 In Mile 12 area of Lagos, heaps of waste tires are collected and sorted for recycling by various industries using it for extracting oil and other petrochemical contents.

“We seal air” as one vulcanizer put it. But vulcanizing has its dangers, since an over-inflated tire that suddenly bursts can blind or maim. The trade also lies at the center of a deeply contested project of urban governance: the ongoing attempt to create not only a mobile but also a modern, ordered, “clean” Lagos. During sanitation days, mandated every three months, vulcanizers are required to clear the streets of abandoned tires, and those who shirk their duty can be sanctioned by the vulcanizer’s police (made up of peers who maintain professional standards and order). Vulcanizers’ values are expressed in a standard exchange between workers that signals both belonging and aspiration. In response to the greeting “LSVA” (which stands for Lagos State Vulcanizers’ Association) the expected reply is a single word: “Progress!”

A black and white photo of a male in a pair of jeans and shoes sitting on a swing made with a waste tire and chains in the left background while in the foreground are waste tires suspended with chains used for the swings.
Credit: Andrew Esiebo 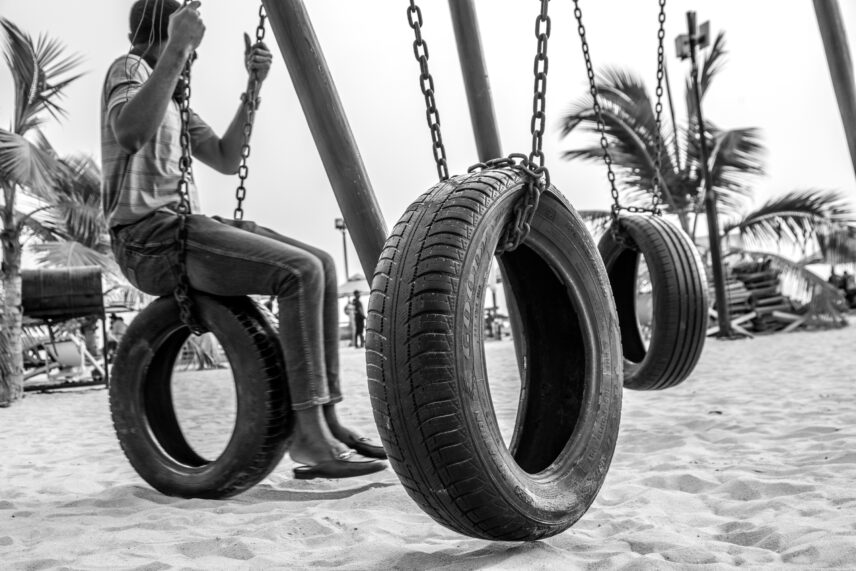 Waste tires converted into swing seats at Landmark beach in Oniru-Lekki, Lagos.
A black and white photo of a shirtless man wearing a pair of jeans in the middle foreground carrying tires from the massive heap of waste tires in the background.
Credit: Andrew Esiebo 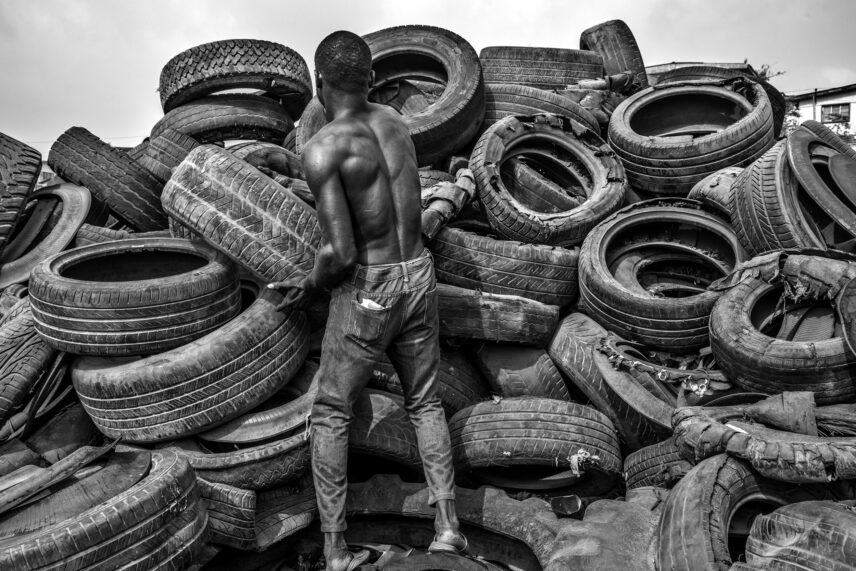 A sorter offloads waste tires for recycling at a dumpsite in Mile 12 area of Lagos. Various industries use the tires and site for extracting black oil and other petrochemical contents.

Simon Coleman is Chancellor Jackman Professor at the Department for the Study of Religion, University of Toronto, and former president of the Society for the Anthropology of Religion. He has carried out fieldwork in Sweden, the United Kingdom, and Nigeria. His most recent book is Powers of Pilgrimage (2021).

Andrew Esiebo is a photographer based in Lagos who started his career by chronicling the rapid development of urban Nigeria. He is a winner of the Visa Pour La Création Prize of the Institut Français and of the Musée du Quai Branly Artistic Creation Prize. See his work at andrewesiebo.com

David Garbin is a senior lecturer in sociology at the University of Kent (United Kingdom), and has carried out fieldwork in Nigeria, DRC, Europe, and North America on migration and urban religion. He is the primary investigator of the Pneuma-city project.

Gareth Millington is a reader in sociology at the University of York (United Kingdom) and author of Urbanization and the Migrant in British Cinema: Spectres of the City (2016). His research interests lie at the intersection of migration and urbanization.