“If you want to beat me for my heartfelt birthday poem, come and find me at my home. Ask the bodabodamen [male commercial motorcycle drivers] to direct you to Mama Stella’s house with a red gate,” anthropologist Stella Nyanzi wrote at the end of a Facebook post last September. Nyanzi had dedicated the poem to Ugandan President Yoweri Museveni, who has been in office since 1986. On November 2, 2018, the government arrested Nyanzi, charging her with “cyber harassment” and “offensive communication.” On August 1, 2019, after spending over 250 days in jail, Nyanzi was found guilty of cyber harassment. The following day, she was sentenced to 18 months in prison.

Nyanzi’s poem, used a graphic description of the president’s birth and his late mother’s vagina to critique his administration. In the poem, Nyanzi juxtaposes images of a failed birth with broad critiques of Museveni’s administration, which she accuses “oppression, suppression and repression.”

This is not Nyanzi’s first time facing such charges. She was arrested in 2017 and spent a month in jail after comparing President Museveni to “a pair of buttocks.” The arrest came after Nyanzi publicly criticized the president and his wife for not providing free menstrual products to school girls. In Uganda, many girls miss school during their period due to lack of access to menstrual products,and Nyanzi spearheaded a fundraising campaign to provide pads to students herself. 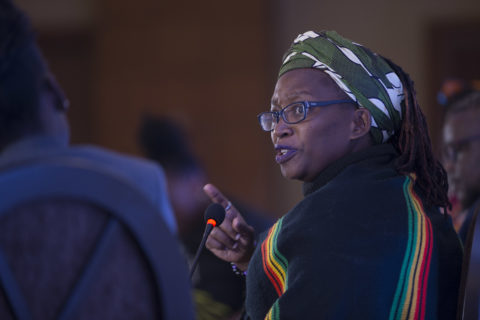 Nyanzi holds a doctorate in social anthropology from the London School of Hygiene and Tropical Medicine. Her research over the last two decades has explored numerous facets of sexuality and gender in Uganda and the Gambia, from women’s attitudes toward HIV-testing to the negotiation of masculinity and sexuality among motorcycle drivers. As an activist, she has been a vocal supporter of the rights of women, girls, and the LGBTQ community. In a recent interview with CNN, Nyanzi said it was her research among marginalized communities that inspired her activism. She saw that those she had spoken with during her research, including LGBTQ people and sex workers, face a climate of increasing discrimination and persecution, and she said she could no longer sit by. “It became impossible to just stay as an academic that is not involved,” Nyanzi told CNN.

The recent hearings on Nyanzi’s case impelled the state to answer questions about whether vagina is a “dirty word” (answer: “most of the time”) and whether vaginas are clean (yes, if they are washed). These exchanges raise complex questions about language and women’s bodies that reveal the connections between patriarchy, misogyny and state censorship. In particular, these questions highlight connections between Uganda’s 2011 Computer Misuse Act, under which Nyanzi is being charged, and other laws, such as its 2014 Anti-Pornography Act, which has been criticized for unfairly targeting women. As Nyanzi’s own research has shown, what is considered obscene or vulgar depends on context and the speaker’s social status. In this framework, sexualized and explicit speech can serve as a language of last resort.

Nyanzi has placed her own activism within two traditions. The first is radical rudeness, a form of activism that emerged in Uganda in the 1940s. Carol Summers (2006) has argued that in the colonial period, civility and politeness served as powerful tools for social control, especially in spaces of collaboration between the British administration and Baganda elites. Activists pushed for change through “rude” letters, pamphlets and other public communication that criticized not only British rule but local power structures as well.

Nyanzi has also invoked her status as Nnalongo, a mother of twins. Ganda traditions grant special status to the parents of twins, including the breakdown of certain rules of propriety, granting mothers of twins unusual license to speak about sexual matters (Lutwama-Rukundo 2015). Writer Margaret Namulyanga, who has been advocating for Nyanzi since her arrest, says that Nyanzi’s status as a mother of twins carries special weight. In a recent telephone interview with the author, Namulyanga said, “Ganda cultural norms esteem Dr. Nyanzi and [hold] that the gods (God) grants her special privileges to utter what they call vulgarity.”

Nyanzi’s subversive use of hyperbolic and grotesque imagery as a tool for political protest draws from these established histories, but her strategies are also adapted for the digital era. She has used social media to shock, delight and trouble her audience with overtly sexual commentary in posts that move between conventional status updates and poetry. “Stella Nyanzi’s approach really challenges us as a country to really consider what is more offensive when it comes to our leadership, and the condition of the people of Uganda. It’s really remarkable to imagine that words, mere words, can offend people much more than the really appalling conditions that people live in,” says Namulyanga.

Nyanzi’s assertion that her activism is grounded in both anti-colonial history and Ganda tradition also pushes back against narratives that paint the feminist and queer movements in Uganda as the product of foreign influence. The latter strategy, which seeks to frame anti-feminist and anti-LGBTQ positions as anti-colonial, has proven powerful in countries across the continent in recent decades, but local activists like Nyanzi are instead reclaiming and re-narrating tradition and history.

It is here where Nyanzi’s scholarship and activism most powerfully collide. While many of the issues with which Nyanzi grapples are sensitive matters in Uganda today, her supporters say her work is reflexive and sensitive to inequalities. Her academic work, they feel, speaks to larger questions about the politics of writing and breaking silences. “What Dr. Nyanzi has done is translate academia into a consumable product for peasants and so called lumpen class,” Namulyanga says. In addition, she feels that Nyanzi has sacrificed personal security to push for change in Uganda. “Dr. Nyanzi has shunned self-preservation, as an academic [and] a writer and dived head first into the murky, violent politics and in her pursuit of socio-political change in Uganda.”

Nyanzi’s case echoes many others around the world. student activist Jose Bello was arrested by Immigration and Customs Enforcement (ICE) in California after reading a poem critical of US immigration policy. In June, Franco-Iranian anthropologist Fariba Adelkhah was arrested in Iran without known charges. Earlier this week, Ugandan pastor Joseph Kabuleta was arrested by plainclothes security officers after critiquing President Museveni online. Each of these cases bears similarities to Nyanzi’s own arrest. Meanwhile, Freedom House’s “Freedom on the Net” report for 2018 indicates growing online censorship in many countries. Restrictive laws on internet use and internet shutdowns are on the rise across Africa and throughout the world.

Amid these chilling global trends, Nyanzi’s challenge to the government of Uganda echoes across borders. Nyanzi is currently in prison following the court’s judgement last week. However, the real test of her case may not come from the courts, but from the activists, scholars and everyday people who are watching her case. What they learn and how they respond to Nyanzi’s calls to action will have consequences not only for Uganda but throughout the world.

Jessie Fredlund is a doctoral candidate in anthropology at the Graduate Center, CUNY. Her research investigates the social history of water and rain in the Ruvu River catchment of eastern Tanzania examining how issues of gender, work, and religion relate to environmental management in the context of global climate change.

Daniel Yaw Fiaveh is a lecturer in anthropology at the Department of Sociology and Anthropology, University of Cape Coast. He has interests in Men and Masculinity and Sex Studies. An ACLS Fellow, he founded the Centre for Men’s Health and Sex Studies; a not-for-profit organization to promote and gain support for work on men in Ghana.