Nsima Udo from the University of Western Cape (South Africa) will use the Award to conduct dissertation research in Nigeria.

The African Critical Inquiry Program (ACIP) has named Nsima Udo as recipient of the 2020 Ivan Karp Doctoral Research Award. A Nigerian student pursuing his PhD in History at the University of the Western Cape, Udo will use the Ivan Karp Award to conduct research for his dissertation project, The Politics of Aesthetics and Performance: Visuality and the Remaking of Culture in the Calabar Festival and Carnival, 2004–2019. The project examines the multilayered aesthetics of the Calabar Festival and Carnival, an annual event founded in Cross River State, Nigeria in 2004, at a time of political-economic change that demanded revenue diversification and the creation of a tourist economy in Nigeria. The month long event blends elements of local cultural festivals with aspects of Caribbean carnival, which itself dates to the 18th century and combines Indigenous, European, and African performance traditions. In the Calabar Festival and Carnival, some of these influences “returned” to Africa and were remade. Udo plans to use the convergence of festival performances (dance, music, masquerades, floats, puppetry, street parades, and carnival revelry), visuality, and local sensibilities to tease out different forms of aesthetics and analyze their historical resonance in the ongoing Calabar Festival and Carnival over the past two decades, exploring the politics of provenance, and the visual and political economies of the “carnivalization of festival.” Udo joins a cohort of students who, since 2014, have received Ivan Karp Doctoral Research Awards from ACIP. The Karp Awards support African doctoral students in the humanities and humanistic social sciences who are enrolled at South African universities. They help address the dearth of research funding available for humanities and social science graduate students studying in South Africa who wish to work on projects that illuminate public culture, public scholarship, museum and heritage studies, and related topics. To date, ACIP has fielded applications from a wide range of universities and supported a dozen research projects for students in anthropology, art history, ethnomusicology, geography, history, sociology, African studies, theater studies, and visual studies.

Founded in 2012, the African Critical Inquiry Program is a partnership between the Centre for Humanities Research at the University of the Western Cape in Cape Town and the Laney Graduate School of Emory University in Atlanta. It grew out of longstanding collaboration that began in 1999 between Emory’s former Center for the Study of Public Scholarship and several South African institutions of public culture, including the University of the Western Cape, University of Fort Hare, University of Cape Town, Iziko Museums, the District Six Museum, Robben Island Museum, and the African Programme in Museum and Heritage Studies. ACIP is supported by donations to the Ivan Karp and Corinne Kratz Fund at Emory, which was created in memory of Ivan Karp after his death in September 2011. A prominent Africanist anthropologist and pioneering museum studies scholar, Karp was the National Endowment for the Humanities Professor at Emory and co-directed the Center for the Study of Public Scholarship with Corinne Kratz (see here for an online archive of Karp’s publications). Kratz currently serves as Emory Director for ACIP and Distinguished Professor of Anthropology and African Studies Emerita. Creating ACIP was a fitting way to honor Karp’s lifetime of commitment and scholarship and to continue their joint work with colleagues in South Africa. 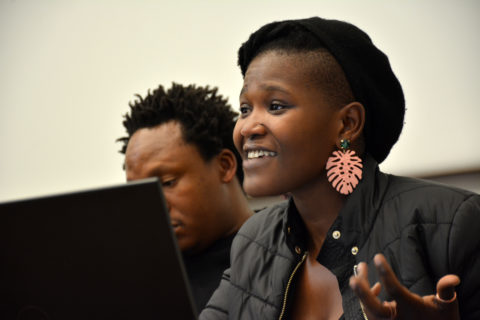 Image Description: A woman in a black coat sits in front of a laptop, hand up as if she is gesturing while speaking.
Caption: Nosipho Mngomezulu makes a presentation during the 2019 ACIP Workshop, African Ethnographies. Rui Assubuji

With a steering committee drawn from South African universities and institutions of public culture, ACIP fosters thinking and working across institutions, across disciplines and fields, and across generations. It seeks to advance inquiry and debate about the roles and practice of public scholarship and public cultural institutions in shaping identities and society in Africa both through the Ivan Karp Doctoral Research Awards, as well as through annual ACIP workshops, which always include that year’s Karp Award students. The ACIP workshops are intended to spur intellectual discussion on issues of pressing conceptual and theoretical concern, and also to consider methodological and logistical issues that facilitate and limit innovation and collaboration among public scholars. ACIP workshop grants are awarded to cross-institutional, cross-disciplinary teams based in South Africa who propose the theme and format for the coming year. ACIP Workshops have included The Arts of Intervention (held in Oudtshoorn, 2014), Red Assembly—Time and Work (East London, 2015), Other Universals (Cape Town, 2016), Secret Affinities (Johannesburg, 2017), Missing and Missed (Cape Town, 2018), and African Ethnographies (Cape Town, 2019). Rethinking Resilience, the 2020 ACIP Workshop, originally scheduled in Makhanda in March, has been reconfigured as a virtual workshop in October and will result in a special issue of Social Dynamics.

Other ACIP workshops also produced special issues, sometimes several per workshop, for the journals Kronos, Anthropology Southern Africa, Parallax, and Critical African Studies. The African Ethnographies workshop is to feature in several episodes of “Anthropological Airwaves,” the flagship podcast of American Anthropologist, while Other Universals spawned an ongoing Mellon-funded supranational program of the same name. The Ivan Karp Award students have been equally successful and productive, going on to receive postdoctoral fellowships, publish books and articles, curate exhibitions, present their work at international workshops and conferences, and take up posts in universities, museums, and other cultural organizations. Further details on the Karp Award students and ACIP Workshops can be found on the ACIP website. Image description: A woman in glasses and a brown scarf stands in a conference room.
Caption: Candice Jansen, one of the 2016 Karp Award fellows, currently leads Research and Exhibitions Programming at The Market Photo Workshop in Johannesburg. Candice Jansen

As the African Critical Inquiry Program begins its eighth year of making awards, it aims to continue promoting critical interdisciplinary debate, nurturing young scholars and cross-institutional, cross-generational engagement, and linking public scholars based at universities, museums, and other cultural institutions in South Africa and beyond. The next calls for applications were released in November 2020, both for organizing the 2022 ACIP Workshop and for the 2021 Ivan Karp Doctoral Research Awards. The application deadline for both is May 3, 2021.

To learn more or donate to support the African Critical Inquiry Program through the Ivan Karp/Corinne Kratz Fund, visit ACIP’s website and Facebook page. To receive ACIP updates and news, send an email to [email protected].

Corinne Kratz is Distinguished Professor of Anthropology and African Studies Emerita at Emory University. She is the author of The Ones That Are Wanted: Communication and the Politics of Representation in a Photographic Exhibition, Affecting Performance: Meaning, Movement and Experience in Okiek Women’s Initiation, and co-editor of Museum Frictions: Public Cultures/Global Transformations.