Cultural astronomy can further our knowledge of different communities in Africa. Like Chinua Achebe’s character Ezeulu, we could learn much by turning our gaze to the moon and heavens.

In the opening of Nigerian novelist Chinua Achebe’s masterpiece, Arrow of God, the protagonist, an Igbo chief priest named Ezeulu, gazes patiently at the early evening sky awaiting signs of the new moon. Welcoming such an astronomical event is crucial to planning economic tasks, scheduling seasonal festivals, and organizing market days. For Ezeulu and others in the area of Umuaro in south Nigeria where the novel takes place, the moon informs the timing and regulation of numerous social activities. It’s regular presence and absence in the night sky is part of a matrix that connects people, communities, nature, the heavens, spirits, and God. 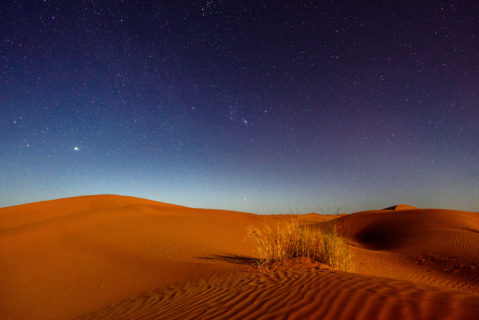 Culturally embedded astronomical knowledge and observation that inform social forms, ideologies, and behaviors—cultural astronomy—appears quite early in the African archaeological record. The megaliths of Nabta Playa in southern Egypt, likely used in the Middle Neolithic to mark the summer solstice and onset of the rainy season, present some of the earliest known archaeological evidence of astronomical practice. The dancing stones of Namoratunga near Lake Turkana in modern Kenya—initially dated to 300 BC, yet more recent evidence dates the site earlier (Hildebrad, Shea, and Grillo 2011)—are 19 pillars oriented toward seven star constellations that were perhaps used as a stellar observatory or to align the constellations with a 12-month, 354-day, lunar calendar.

Much later, changes in the cultural astronomy of the Sahara and Sahel regions appear in the written record as different cultural groups adopted and integrated Arabic cultural astronomy through increasing contact with the Maghreb through Muslim missionaries, clerics, traveling scholars, marabouts, and merchants. In addition to religious-based affinities between Islam and local religious systems such as the belief in a supreme creator and complex systems of divination, non-seasonal, lunar-based Islamic ritual calendars were easily mapped onto local agricultural and ritual calendars to produce syncretisms that give Islam in West Africa its contemporary character. This was further solidified in such centers of learning as Timbuktu, the architecture of which is linked to celestial systems, where the growth of Koranic schools allowed advanced astronomical knowledge to be kept and transferred via written texts by ritual specialists charged with maintaining social balance and determining community events such as seasons and festivals.

African cultural astronomy exists in traditions and knowledge passed orally from generation to generation. Africans used celestial knowledge to chart seasons and to regulate agricultural cycles and ritual calendars. Celestial bodies were used to coordinate both work and social activities; they played and continue to play roles in divination, spatial design, and decision-making. A major role of the celestial heavens in general and the moon in particular, is their embodiment of the pan-African sense of time—the moon’s predictable and regular phases inform, illuminate, and regulate our living experience.

Today, especially urban Africa, time is kept and measured by alarms, clocks, calendars, and other such quantitative technologies that precisely measure age, date, and history. Yet time is also kept and measured qualitatively, microcosmic rather than macrocosmic, evaluated through metaphor rather than numeral order. For example, in the Republic of Benin time is reckoned numerically throughout institutions such as government and universities, but between neighbors and in communities, time is still known through expression. When asking the time in early evening, one may hear (in English from Fongbe) “the night is soft,” as opposed to later when “the night is dead,” or finally, if one ventures out quite late, “the night is bad,” reflecting the belief that no good is coming or enacted so late (a notion given further expression in the Haitian proverb, “If you are out so late at night, shake the devil’s hand for me”). At a more macro level, events, changes in nature, and behaviors of celestial bodies inform age, date, and season. Typically, many societies follow a 13-month celestial cycle with months counted by lunar phases, each month beginning or ending on the new moon. Years are defined by observing star systems such as the Pleides cluster, as these allow greater precision than lunar cycles. Hence for many cultures such as the Dogon stars serve calendrical purposes such as determining agricultural cycles while the passage of the moon informs religious, market, or other social activities not tied to environmental change. For other cultural groups in the Sahara and Sahel regions, the lunar-based Islamic calendar largely dictates ritual cycles while season-based phenomena are organized by star cycles. The predictable and perpetual phases of the moon make it an especially a central body in both astronomy and mythology, a natural symbol for cycles of life and a key marker of both ritual and mythical time. For many, the new moon marks the new month complete with new tasks, new beginnings, and rebirth. In many areas of central Africa the moon’s phases mark social transitions and aid understandings of fortune and misfortune, good and evil, predictability and change.

Africa is not, of course, a monolithic entity and the moon embodies polyvalent meanings. Hanging like a lamp in its bright fullness, it illuminates an evening’s entertainment. Obscuring in its absence, it covers intrigues and machinations. Slave traders and raiders often operated at night, and many secret societies such as the Ekpe (Leopard Society) of West Africa still use the darkness of the new moon to cast fear and mystery upon their initiations and other ceremonies. For some cultures such as the Akan, Nga, and Bambuti the moon is ascribed feminine meanings, regulating menstrual cycles and initiations into womanhood. Or, the moon in its crescent may be associated with masculinity and male virility. Traditional Zulu mythology maintains the moon has two wives. The moon may also be genderless, the celestial home of spirits whose domains are in the heavens. The Nga of Nigeria organize ritual and domestic space according to moon phases, and among the Luba of the Democratic Republic of Congo the white color of the moon is associated with the spirit world and so white is worn for religious ceremonies. Twins, associated with spiritual power more generally, are called “children of the moon.”

As an anthropologist, the Apollo moon landing tells me more about the United States at a particular moment than about space travel or the moon itself. Similarly, cultural astronomy can further our knowledge of different communities in Africa. Evidence of such astronomical practice tells us stories of ancient peoples, historical contacts, and cultural borrowings. Contemporary astronomical knowledge and observation inform and coordinate seasonal tasks such as agriculture or fishing, regulate religious rituals and ceremonial calendars, and order perceptions of time. This July, Americans mark a linear, numerical anniversary of our first “meeting with the moon” as Neil Armstrong made his first lunar steps; the Igbo “meet the moon” quite regularly. Ezeulu’s observations of moonrise in Arrow of God are a regular and important part of his social position as chief priest and his announcement that the moon has arrived is a vital moment for the community. The African cultural record is filled with the importance of achieving the first moonrise sightings, especially after a new moon, and the accuracy by which this is accomplished has surprised Western astronomers and skeptics. The same astronomers are increasingly turning to African cultural astronomy to boost and fill gaps in our collective knowledge of the heavens. The same can be done in the anthropology of Africa more generally.

Christian Vannier is a lecturer in the departments of Africana Studies and Sociology, Anthropology, and Criminal Justice at the University of Michigan, Flint. He is the coauthor of An Ethnography of a Vodu Shrine in Southern Togo and coeditor of Cultures of Doing Good: Anthropologists and NGOs.