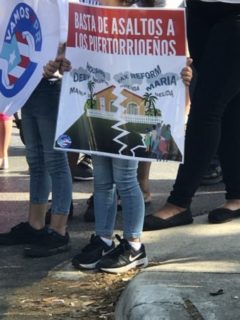 Six months after Hurricane Maria, over 100 community leaders, activists, and Puerto Rican evacuees marched down the narrow sidewalk to the Puerto Rico Federal Affairs Administration (PRFAA) office in Kissimmee, Florida. Several of the evacuees were living in nearby hotels with FEMA’s Transitional Sheltering Assistance (TSA) funding. The funding, they feared, could end at any moment—a reminder that they had not altogether escaped a precarious living situation.

The protest was hosted by Vamos4PR, a network of organizations committed to addressing the fiscal crisis in Puerto Rico. As we chanted, “Puerto Rico no se vende/Puerto Rico se defiende,” I noticed a “for sale” sign in front of PRFAA. I wondered how long it appeared after the news broke that a rat infestation had contaminated boxes of donations that were never sent to the archipelago. Although PRFFA officials denied allegations of an infestation, the area’s only regional office closed its doors, later re-opening in Orlando.

Washing of the feet

I had almost forgotten that it was Holy Thursday when we stopped in front of the building. Four Puerto Rican evacuees displaced by the storm stepped forward and sat in the folding chairs already waiting. An Episcopal priest knelt down, holding a clear pitcher of water. One by one, she poured the water over their bare feet, letting it splash against the hot concrete.

In Christianity, the washing of the feet on Holy Thursday, also known as the “mandatum,” is a tradition that re-enacts the scene of Jesus washing the feet of his apostles. As one of the priests presiding over the event explained:

Our Lord taught us to lower ourselves, to go down to the lowest point of our beings in physical form, which is the feet. Dirty feet. Feet that have suffered. Feet that are walking as you are walking, as we are all walking since Maria. Feet that do not rest from office to office. Feet that do not rest looking for medicine for our relatives…The feet of each and every one of us here are dirty, tired, sweaty, full of our tears…We are cleaning the sweat of suffering after Maria. 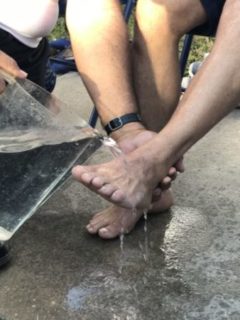 As the priest’s words suggest, the washing of the feet of post-Hurricane Maria evacuees is more than a sacred ritual act. Rather, it represents the embodiment of suffering across transnational spaces shaped by im/mobilities, loss, and affective attachments that link Central Florida to Puerto Rico.

Holy Thursday, however, was also marked by betrayal. It was during the Last Supper that Jesus told his apostles that one among them would betray him. The language of betrayal permeated much of the discourse surrounding the Vamos4PR event. Speakers singled out Puerto Rico’s then-governor, Ricardo Rosselló, for “abandoning” Puerto Ricans in Central Florida and “betraying” his electorate by supporting cuts to public spending and other austerity measures that benefited vulture capitalists at the expense of the archipelago’s approximately 3.2 million residents. A betrayal that, since the writing of this piece, has been compounded by the nearly 900-pages of a leaked group chat message in which Rosselló and other high-ranking officials exchanged homophobic, misogynistic, and disparaging comments. While Rosselló was justifiably signaled out for his role in the betrayal of the Puerto Rican people, there has been a fair share of blame to go around since the hurricane from FEMA’s (mis)management of resources to the expansion of disaster capitalism (Klein 2007) manifested in the privatization of recovery efforts, ongoing attempts to privatize public utilities, and the defunding of the University of Puerto Rico. But if betrayal necessitates trust, what does that mean for Puerto Ricans who did not trust the United States and Puerto Rican governments in the first place? The question then arises: Is the post-Hurricane Maria response a betrayal or a symptom of something larger?

The afterlife of disaster in Central Florida

Deborah Thomas (2007) reminds us that “disasters pose a variety of challenges for anthropologists. These challenges are both conceptual (having to do with how we parse notions of temporality and scale, cause and effect) and political (having to do with the ways in which and venues through which we witness these events and their afterlives).” Central Florida is a site where the afterlife of disaster is felt daily. In the six months following the hurricane, an estimated 56,000 Puerto Ricans arrived in Florida (Hinojosa et al. 2018). Recent studies indicate that post-Hurricane Maria migrants to Central Florida are facing more difficulties when it comes to jobs, housing, and transportation than their counterparts in South Florida (Scaramutti et al. 2018). This is exacerbated by the worsening housing crisis that threatens the ability of Puerto Ricans to secure residence upon arrival. But Central Florida is also a site of contestations, where activists seasoned and new take to the streets to declare, “Basta ya.” And more recently, where Puerto Ricans in the diaspora are compelled to join a movement like #RickyRenuncia in the name of “los que queremos regresar.”

As an anthropologist who considers both the conceptual and political challenges of disaster, what I am suggesting here is a movement against ablution. While Puerto Ricans celebrate a historic victory with the resignation of Rosselló, let us remember that there are some things that cannot and should not be washed away—the human costs of disaster and austerity that undergird the continued colonial experience of Puerto Ricans both on the archipelago and in the diaspora. Perhaps it is not cleansing then that we should seek, but an attentive to the sullied intersections of disaster, power, and diaspora.

Julie Torres is a doctoral candidate in anthropology at the University of Illinois at Urbana-Champaign. Her research explores how socioeconomic and political conditions in Puerto Rico have cultivated a particularly local activist community in the Orlando metropolitan area that imagines itself as part of a larger transnational Puerto Rican community.