al-Dar Is Where the Heart Is

An institute of Islamic studies in Cairo provides a space of potentiality, collaboration, solidarity, and support.

This story is based on Alia Amr Amin Shaddad’s Middle East Section 2021 Best Graduate Paper Prize-winning essay drawing on her MA thesis. The deadline for the 2022 prize is August 1, 2022. More information on submissions is available here.

mu’allimah Marwa, a teacher in the Dar (an institute of Islamic studies in Cairo) my ethnography takes place in, talked about the importance of reigning in the heart before action; to set an intention by making the heart present. Everyone agreed, but everyone also recognized the difficulty. The heart is called Qalb in Arabic, meaning turning or changing. It is constantly shifting. Sometimes, one can make it as present as possible, to act with intention. But one also often unintentionally succumbs to the heart’s transformations, and we imagine affect as that instance. The heart often extends and surpasses a specific moment. It oscillates between intentionality and unintentionally. It is not in a vacuum―it projects the past into the present and allows for the future to trespass. It is duration.

Maram was a student at the Dar. She is in her early thirties and is a mother of two. She has wide green eyes, a warm smile, and a captivating soul. Her BA is in architecture, but she is a painter. I know her through my cousin, but I got to talk to her more when all three of us started going to the same art class together. On one of our trips back home, she asked me about my ethnography, and, in a serendipitous turn of events, she told me all about her own time at the Dar. She told me about how friendly everyone was, how nice it was that they were all women, that they could get their children, and that they were all like one family. She went on about how, during the time she went, she had gotten close to a group there and they used to hang out outside the Dar as well. Doing so made her feel like that place was an entire community, supporting one another on their transformative journeys. “There’s something about it,” she said.

A photograph of a brown wooden door with a sign on the front that says “Accounting,” opening to reveal a small room with striped beige tiles on the floor. At the far end of the room is a large wooden cabinet and clothes rail filled with colorful Tupperware boxes, detergents, clothes, blankets, bags, and other items that are being sold.
Credit: Alia Amr Shaddad 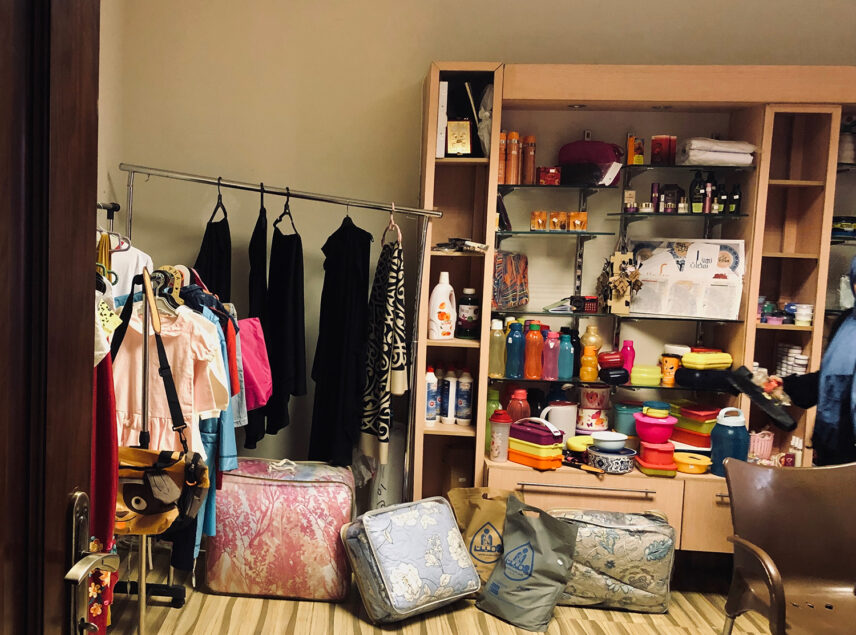 A marketplace room in the Dar where miscellaneous items are sold.

Perhaps one of the most common words I have heard at the Dar, and that the women often used when they tried to elaborate on that indescribable thing, was “love.” Something I often heard from both students and teachers was, “I love you for the sake of Allah.” The frequent utterance of this sentence is revelatory of the kind of love on which this affective community is created. For many, attachment to the Dar and its community is often forged by this love. However, it is also true that for many others, love is no longer enough. A decrease in magnitude or a complete vanishing of love entails a break, or a letting go of this space and its community altogether. In both cases, love becomes central.

One then necessarily thinks about how—and to whom—this kind of affective community extends. Is this feeling of attachment generalized or specific? Is there a particular kind of student who gets to belong, and another who does not? Albeit necessary, this questioning of the affective community is not to say that it is devoid of any potential. Potentiality is deliberated through and unravels with the unfolding of the ordinary. This unfolding is important to sit with to reveal or simply consider the possibilities that may come. These possibilities need not be known for a fact or cannot necessarily be judged clearly—but potential still exists. Hence, trying to think through such affects allows us to see the potential, one that could perhaps emerge through bringing people together, with a recognition of the different subjectivities. It also helps us realize that there is a sense of community and love that is not necessarily even deep love. This approach breaks down that charged description and declaration of love that one feels is so major and introduces another notion of love, one that has more to do with communal imaginations than with burning sentiments. It is an approach to understanding love that is more grounded, more accepting of what it is, and, perhaps more practical?

Farida stopped going. An electronics major in her twenties, Farida also used to be a student at the Dar. I came to know Farida in college, and we quickly became friends. When I was conducting my fieldwork, I recalled that Farida used to go to this Dar. In one of our outings together, I had to ask her about it. She told me about how every class had their own WhatsApp group so that they could communicate with one another and with their teachers. She recalled a story where one woman in her WhatsApp group sent a message asking the teacher if it was permissible to mortgage her house, because both she and her husband were facing financial difficulties. The teacher referred her to someone else, telling her that she is not experienced enough on the matter to tell her what to do. The rest of the group then continued to send her consolation messages and prayers.

Farida didn’t really like this. She felt like the Dar functioned as a sort of community and that it should have helped the woman collectively, using monetary means or any other forms of material assistance beyond prayers. Perhaps this was one of the moments that made Farida feel like she didn’t belong to that community anymore. She told me she initially wanted to send a text message to mu’allimah Lama, the owner of the Dar, to ask her how they could help. She eventually opted not to. I never understood exactly why, but the couple of times I asked her about it, she gave a shrug of indifference and moved on—perhaps the same one she would give the Dar itself. Even after Farida stopped going to the Dar and didn’t feel like she belonged, there was still a sense of obligation—an obligation to support. Obligation and even guilt are also affective experiences that end up translating to staying. They reveal the complication of saying words like “community” and “love” without thinking through other affective experiences that make someone go, stay, and even leave.

Despite this example, there were still other manifestations of solidarity or support that existed in the Dar. To me, as to others, perhaps the most striking example was that of the market or showroom. It is a room in the Dar, and it exists in most of the other Duur as well. This room contains things one would imagine exist and others that I would never have guessed: fitted sheets, duvet covers, spatulas, whisks, glassware, toys, abayas, summer dresses, pajamas, lipstick, face masks, bath salts, candles, accessories, henna for hair, henna for skin, snacks, scrunchies, frozen vine leaves, frozen chicken, Tupperware, and children’s clothes. Salam, a student at the Dar who is also in her twenties, saw this as one of the expressions of “unconditional love.” The showroom has become an essential part of any Dar, as mu’allimah Lama explained, “Even though it is illegal, it does provide some income for the Dar, and the students can come and leave with frozen food, abayas, scarves, clothing for their kids, bed sheets… I fulfill their needs, but it’s not for profit.” She added that she decided to have one because she used to benefit from it herself when she went to another Dar before, and she liked to have something like that in her own Dar. The market also symbolized solidarity and support for the mothers and the women in the Dar who want to be able to make it while juggling responsibilities of the house or children. I think about the market—once again—as a scene of potentiality, providing imaginations of what spaces of knowledge can look like, and how collaborations, solidarities, and support can exist and persist.

I explore these different affective potentialities that come out of the Dar. While highlighting some of these possibilities (like those emerging from the market, for example), I am still making room for open-endedness. This open-endedness is a recognition that the world is not an overwhelmingly factual reality with minor uncertainties but is an overwhelmingly uncertain reality with very few unstable certainties. It is in these uncertainties that potentialities arise that we could never calibrate or plan for. When I explore these potentialities, I do not wish to present them as carefully planned acts intended to necessarily function as they do. Instead, I am suggesting that the alternative arrangements present at the Dar, and the potential they emit, often manifest themselves as they do through the social interactions of multiple subjectivities within the space.

Such potentialities happen in the everyday: the everyday that is not always calculated, and it is mostly messy and unruly. The everyday is where life happens and where bursts of potential break through it regardless of what we might think or hope. The Dar is an alternative imagination not because of clear instruction or intention, but just by existing and being in the world.

Alia Shaddad obtained her MA in Sociology-Anthropology from the American University in Cairo. Her work explores space, time, subjectivity, relationships, alternativeness, affect, and potentialities. Her MA thesis titled "Making Yourself at al-Dar: On Islamic Education, Social Imaginations, and Affective Possibilities," is meant to be an act of storytelling that explores the Dar as an alternative space of knowledge, and unravels how its different contexts and rhythms allow us to imagine what that alternative means in the everyday.