Anthropomorphizing Wine in Our Current Climate

What might a Basque wine tell us about current wine trends and broader human issues?

My coworkers at the wine bar knew I had an interest in the Basques, so when our new inventory included a bottle of Txakolina, they were eager for me to try it. The language on the label immediately signaled this was a Basque wine with a “tx” front and center. As I put the glass to my nose, an effervescent salinity took me by surprise. What some would call a refreshing minerality mirrored the bouquet as I slurped in a mouthful, the sides of my tongue tingling from the high level of acidity. 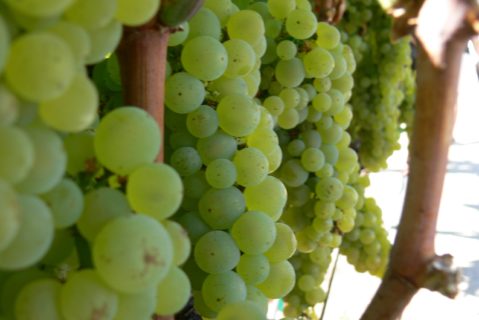 Wine allows us to enjoy a connection between a people, their culture and land, and our palate. It reflects much about and in response to a culture, but also takes on agency when used as an instrument to shape social relations and practices. This year’s AAA/CASCA Annual Meeting theme focuses on our changing climates, honing in on issues of struggle, collaboration, and justice, highlighting indigeneity. I ask myself what we can learn about pressing social issues such as coloniality and climate change through the study of wine? Are emerging practices in wine production and consumption merely a projection of pressing broader issues or could they generate practical responses and solutions?

When I first started drinking Txakolina, a traditional Basque wine, I could not help but make an anthropomorphized connection between this unique drink and the strong character of its Basque Country provenance. The grapes cultivated to make Txakolina are indigenous; the signature varieties, Hondarribi Zuri and Hondarribi Beltza, are not the familiar “noble varieties” ubiquitous in other winemaking parts of the world. The bracing taste these grapes impart is often described with words reflecting its terroir, such as “briny,” “refreshing,” and “green,” and remind me of the people who produce it and place from which it is produced. Other aroma and flavor descriptors such as “traditional” yet “distinct” are also common terms for the Basque character. Some Basque locals also depict Txakolina as a challenging wine due to its previously rustic and unusual taste profile, echoing the common stereotyping of the Basque language, Euskara, as one of the most difficult to learn or comprehend. The wine is also tightly connected with the cradle of Basque culture and language through the baserri, the Basque farmhouse and the original site of Txakolina production before it became the large-scale internationally exported product that it is today. Indeed, Txakolina’s debated etymology stems from the words “etxeko ain,” meaning “enough for the home.”

In the wine industry, we anthropomorphize wine and grapes in all kinds of ways particularly when it comes to language. I often had to hold back a giggle in wine classes when hearing this fermented grape juice described as “muscular,” “approachable,” “brooding,” “racy,” “flamboyant,” “elegant,” and even “intellectually satisfying.” Thomas Parker, who wrote the inspiring book Tasting French Terroir, examines the bonds between cuisine and country as well as the aesthetic of language and the role it plays in gastronomic mores we use to define the natural world. This book provided me with more than just the clichéd “food for thought,” giving me a starting point from which to analyze the production and consumption practices of the wine world.

I began to see parallels between these practices and broader human problems such as issues of coloniality and climate change. That is to say, while I thoroughly enjoy a Burgundian Pinot Noir and Chardonnay or Bordeaux blend, I question why almost every “New World” country (a problematic wine term we should challenge) produces wines made from grapes native to France. Not to detract from the significant role France had in developing wine production, but why are we in the United States not looking closer to home and indigenous grape varieties that have existed on our own soil, as the Basques have done? Could we not derive quality products and social distinction based on grapes other than these so-called “noble varieties,” especially if there are other varieties thriving closer to home, with roots already firmly established?

In 2017, I attended a gastronomic fair in Donostia/San Sebastián, Basque Country. Bodegas Torres, a wine producer from Catalonia, was offering a presentation and tasting. More than 30 years ago, the family launched a project to revive ancestral grape varieties that were thought to have died out. Their goal included gathering samples of every unknown vine found wrapped around trees or bushes, and examining how it survived in current conditions and climates. Bodegas Torres has discovered more than 50 varieties to date, of which six have great winemaking potential. The tasting showcased these new varieties as well as their efforts to conserve biodiversity and recognize the value of indigenous varieties.

Such projects to increase wine production from indigenous grapes are also taking place outside of Catalonia and the Basque Country in popular winemaking countries such as Italy and Greece. The recognition of grapes that have existed alongside typical “Old World” varieties, as well as destructive human activity, has become an integral part of these winemakers’ missions. Much of viticulture relies on manipulation of the growing conditions with the use of pesticides, fertilizers, and irrigation systems. Using native species that have already adapted to grow in local environments can help mitigate the carbon footprint and make prudent use of our resources. Efforts to acknowledge the value of indigenous grapes as well as their contribution to more sustainable wine production practices is also commensurate with and emblematic of the latest wine industry trends predicted for 2019.

Over time and with burgeoning gastronomic fame, Txakolina continues to evolve favorably on the palate, with some producers incorporating more commonly used grapes such as Riesling and Chardonnay. The taste of the wine can perhaps be more enjoyable to a wider audience, but at what point is the flavor of the local lost in efforts to keep up with the tastes of the global? I cannot help but think of Pierre Bourdieu and what he would say about the struggle for distinction when consuming or selling a wine, and how this is reflected in distinguishing ourselves from others in society. Simultaneously, I think of the obscure and humble mulberry wine from my home in Kansas that I refused to try for so long because it lacked French roots of distinction. Transitioning between and connecting these processes and ideas from anthropomorphizing wine to native varieties to wine production processes and wider social and environmental climates are what ignites my anthropological fire.

The Basque Country provides a lens through which I can study myriad attitudes and practices to do with wine, including the language we use to describe it, the varieties of grapes we grow to make it, the consequences of dismissing indigenous varieties, and the ties between local and global identities. Perhaps we can learn something from Bodega Torres’s approach to winemaking and climate change, and acknowledge indigeneity as a metaphor for addressing some of these issues. Perhaps we can take better care of and value varieties that grow closer to home.

So, I hope you drank responsibly on National Drink Wine Day 2019. By which I mean challenge what you know and that with which you are familiar—reconsider unfamiliar wines, ask yourself what it is that you look for when you chose a wine, and think about how this might contribute to or reflects some of the broader issues of our time. I will still enjoy my glass of French Pinot Noir or Chardonnay, but not after I have considered the significance of also trying another glass of the Kansas mulberry wine.

Kerri Lesh is a Certified Specialist of Wine (CSW) and a PhD candidate in the doctoral program at the Center for Basque Studies, University of Nevada, Reno. Her research interests are Basque language and gastronomy.