Members of the Association of Senior Anthropologists (ASA) will remember the 117th AAA Annual Meeting for several reasons. First and foremost was place and time: San José, when some of the worst forest fires in US history were destroying large swathes of California. From San José, we watched the devastating news of loss of lives, of homes, of a whole town—Paradise—all mingled with heart-rending accounts of apocalyptic escapes. Meanwhile, some attendees wore masks to get relief from the heavy smog hanging over the convention center. Adding to the uncertainties, a block of sessions had been hurriedly moved there from the adjacent Marriott hotel, recovering from a lengthy labor strike. In part for these reasons, many people stayed away from the San José meetings. Attendees were heard grumbling about the disappointingly small audiences at their sessions.

Not so with the ASA sessions, however, and this is the second reason to remember San José. In 2018, we offered a bigger and more varied program than usual: sessions were well attended by enthusiastic audiences of young and old alike. There seems to be a quiet recognition among younger scholars and graduate students that we seniors offer useful insights into the living history of our discipline. In addition, our presentations often provide significant time perspectives on anthropological research in various parts of the world.

Our offerings opened with “Conversation across the Ages,” scheduled unkindly for Wednesday afternoon, a notoriously quiet time before most attendees have arrived. Yet, the session drew an encouraging group of scholars. This is the fifth such event, organized by anthropologist Pablo Landa and his Princeton colleagues Sofia Pinedo-Padoch and Sebastian Ramirez. Although co-organizer Sid Greenfield was unable to attend, the ASA panel, consisting of two Bill Mitchells (middle initial E. and middle initial P.), Jeffrey Ehrenreich, Tim Wallace, Barbara Joans, and Anita Spring, offered spirited responses to Landa’s, Pinedo-Padoch’s, and Ramirez’s questions about fieldwork, and elaborated on their experiences of how it has changed since they were graduate students.

The following day, the two invited sessions for ASA were equally well attended. By 8:00 a.m. on Thursday (admittedly an easy hour for those of us coming from the East Coast), a good crowd gathered to hear Elders talk of long-term field research. Participant Keith Brown not only held the record for the longest span of field research in one area of Japan (57 years), but much of his research has been recorded by David Plath, who shared a portion of his film with us. Dorothy Billings (New Ireland), Laura Zimmerman-Tamakoshi (Papua New Guinea), Maria Cattell (Kenya) and Susan Seymour (India) all recounted, with vivid detail, the satisfaction—as well as the problems—such extended field research can bring.

Speakers in “Omissions and Silences” offered a different take on the topic of long-term fieldwork, focusing on what was not rather than what was addressed: the implications of coca cultivation in Bolivia (Jim Weil); the restraints of researching women’s lives in 1978 Iran (Mary Hegland); the perspectives of Navajo women (Louise Lamphere, who also offered a telling description of the culture of Harvard in the sixties, which shaped her early work); the resistance of the Cree (Regna Darnell); and expectations for Andean researchers in the early 1960s (Bill Mitchell). Discussants Sydel Silverman and Maria-Luisa Achino-Loeb helped frame this stimulating session in both specific and general terms, adding theoretical depth to the presentations.

Two further ASA sessions on Friday, as well as the field trip to the Museum of Computer History, linked this year’s presentations firmly to our location in Silicon Valley, the site of the technological revolution that has irrevocably altered our lives. This is the third reason to remember San José. The rapidity whereby our world and work has been transformed, within our lifetime, held center stage at this year’s meeting, and ASA proudly offered firsthand witness to the changes experienced. Myrdene Anderson, for example, the star of the 1970 HRAF publicity film (shown during the session), recalled her early experiences with that particular experiment in cross-cultural analysis, while Ralph Bolton offered a vividly personal account of his informal training in technology during his anthropological career. During our field trip to the museum, several of us were startled to see that our early, modest computers have now become museum artifacts. I found our Dragon32, together with the Amstrad which replaced it, both tucked away behind a larger (and much more expensive) IBM model.

The later session provided a forum for anthropologists who had participated in that revolution to describe it from the inside. Presenters in this session, Michael Chibnik, Peter Reynolds, Bonnie Nardi, Jeanette Blomberg, and Jan English-Lueck (discussant), gave us a first hand account of what it took for the region to become Silicon Valley; how serendipitous were the situations that gave rise to the transformation; how right from the start there was a blend between academic anthropological experience and the corporate culture of Silicon Valley, a blend supported from funding from the Federal Government and given a countercultural aura by “California Dreaming.”

This year, thanks to the tireless efforts of Alice Kehoe, AAA was able to accommodate the needs of those of us who are visually or audio-impaired. All ASA sessions were instantly transcribed onto a screen facing the audience—and the grateful thanks of many are offered to Kyle Duarte and his team. Yet successful technology remains a challenge. The irony was not lost on us when, despite the assistance of technicians at the Convention Center in this most high-tech of cities, participants in one session were unsuccessful in simply accessing visual images to reinforce their presentations. 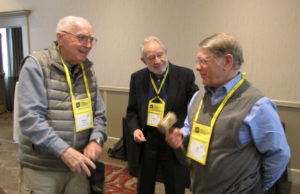 The well-attended business luncheon at the Il Fiorno restaurant was a lively social event. This year witnessed the passing of the gavel, from Bill Mitchell to new President Jim Weil. Bill has served the association well, including presiding over some measure of technological transformation of ASA during his tenure. He has also been a wonderful ambassador for ASA and the warmth of his personality has drawn in many new members. His leadership will be missed, though he has left us in good hands. Jim brings a wealth of experience, administrative as well as research, to his position, and we can look forward to an exciting time ahead.

Susan M. Kenyon, ASA Secretary, is professor emerita from Butler University in Indianapolis. Her main area of research is Central Sudan and she has published widely on Sudanese women’s lives.