In a city famous for its relaxed attitude to living with water, climatic disjuncture has prompted citizenship demands for ecological security.

In October 2011, a massive pulse of floodwater slowly descended the Chao Phraya River toward the Bangkok metropolitan area, a sprawling megacity whose impermeable concrete surfaces all but block the deltaic floodplain. This photo essay uses Theresa Caldeira’s (2000) notion of a “city of walls” to show how anxiety over ecological security fractures the urban floodplain as residents and industry insist on concrete infrastructural defenses. I combine this approach to ecological security with what Bernard Tschumi (1996) calls the “architecture of disjunction.” For Tschumi, built architectural forms instantiate the dynamic immediacy of disparate contradictions—a labyrinth of convoluted interiors rather than a pyramid of hierarchical powers.

Bangkok floods all the time and residents are all too familiar with the periodic inundations that accompany monsoons for a city where transportation was once dominated by canals. But, in 2011 its 16 million residents were subjected to daily reports of failed dykes and breached flood walls for weeks as the water made its way to the city. Anticipation of a devastating flood to come led many to build brick and mortar walls across their shopfront and domicile doorways, literally walling themselves off from their neighbors. Following the floods, large scale infrastructure investment, much of it publicly subsidized, led to the construction of a complex new set of walls especially to protect foreign investments and other high value property. Strikingly, for a people famous for their relaxed attitude toward living with water, the price of capitalist urbanization has concretized a right to stay dry that fractures both the floodplain and the city with a dizzying array of walls. If it is possible to speak of climatic disjuncture, then perhaps it may best be represented as a labyrinth of convoluted ecological interiors as Tschumi suggests.

Homes are situated along a river. One is raised on stilts and the other has a tall concrete wall with a red fence atop it.
Credit: Jerome Whitington 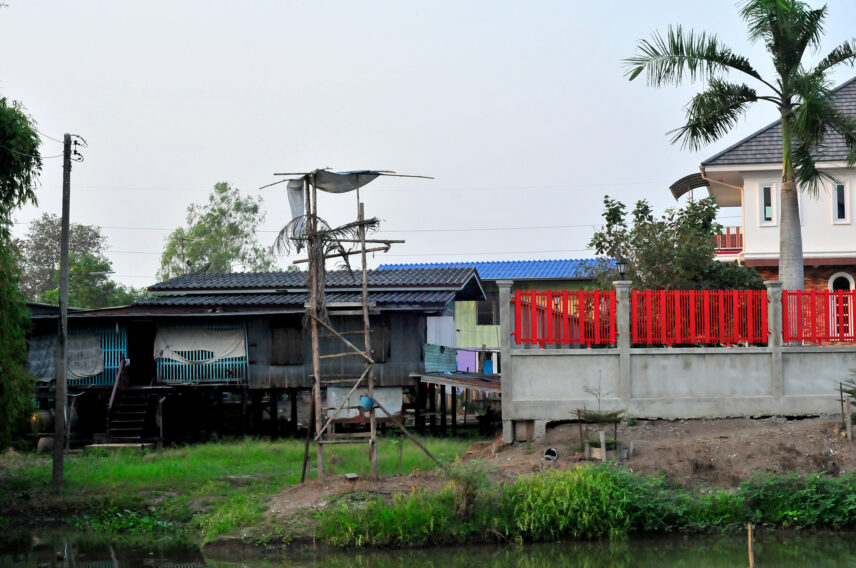 Deep in Bangkok’s peri-urban sprawl, a conventional raised home is flanked by an elite development built on an elevated foundation pad and completed with a perimeter flood barrier (which was not wholly effective). Much of Thailand’s capitalist urbanization has coupled investment to a right to stay dry, whereas conventional architecture has been predicated on a culture of living with water. The high water mark from the 2011 flood is evident on the house on the left—a light colored band just beneath the windows.

A grey half-wall with a cutout opening lines the front of a store with a big glass door and floor-to-ceiling windows. Bright and vibrant green plants rest on the sidewalk and line the short grey wall.
Credit: Jerome Whitington 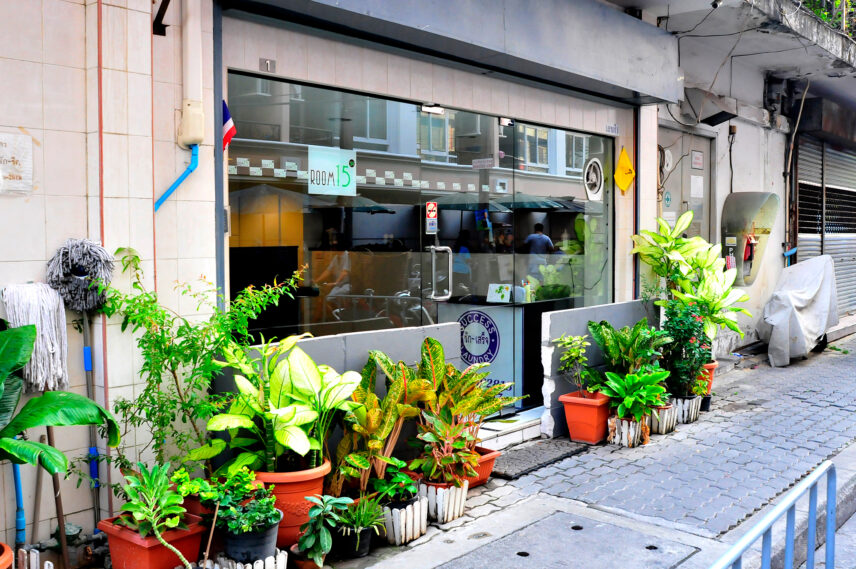 In the city center, anticipation of the flooding led many residents to build hard flood protection across their doorsteps and shopfronts. Taken in 2013, this photo shows a typical way the flood wall is broken open to allow use while largely left intact for future protection. At a time of remarkable mistrust of government and anxiety about social order, the flood turned into a crisis of natural order as neighbors walled themselves off from each other. In Thai, “nature” refers to the state of dharma (thamma-chat). Control of floodwaters is an essential kingly quality; as one interlocutor framed the failure to govern the waters, “Crying, crying, the king is crying every day.”

A number of bikes are scattered across a concrete parking lot. The wall behind the bikes is tall, at least three times taller than the bikes in front of it, and stretched across the wall in reverse are the words “Teijin Polyester.”
Credit: Jerome Whitington 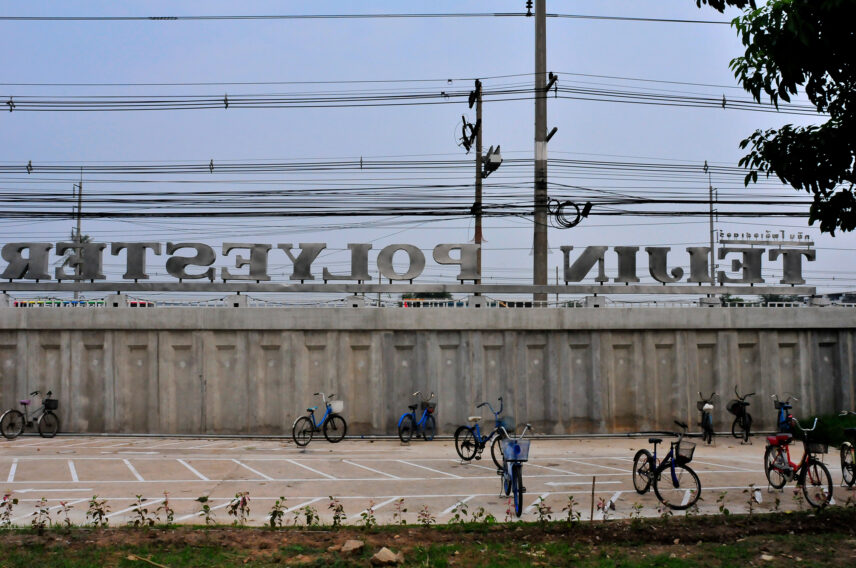 At the time, the flood was the world’s fourth most expensive natural catastrophe; the waters heavily impacted industrial estates and factories built in wetlands unsuitable for farming. Immediately after floodwaters receded, factory owners rushed to build technically sophisticated perimeter walls to assure Japanese investors it would not happen again. Heavily subsidized by the Thai government, this kind of privatized flood protection is a present-day public subsidy of corporate climate risk. Geographers Robin Leichenko and Karen O’Brien (2008) refer to this as the double exposure of globalization and climate change in which the risks of one kind of globality are exponentially intensified by the other.

Rubble, building materials, and trash are strewn around on the ground. A tall concrete wall is off to one side and behind the items on the ground there are partially finished (or partially destroyed) columns and a blue building.
Credit: Jerome Whitington 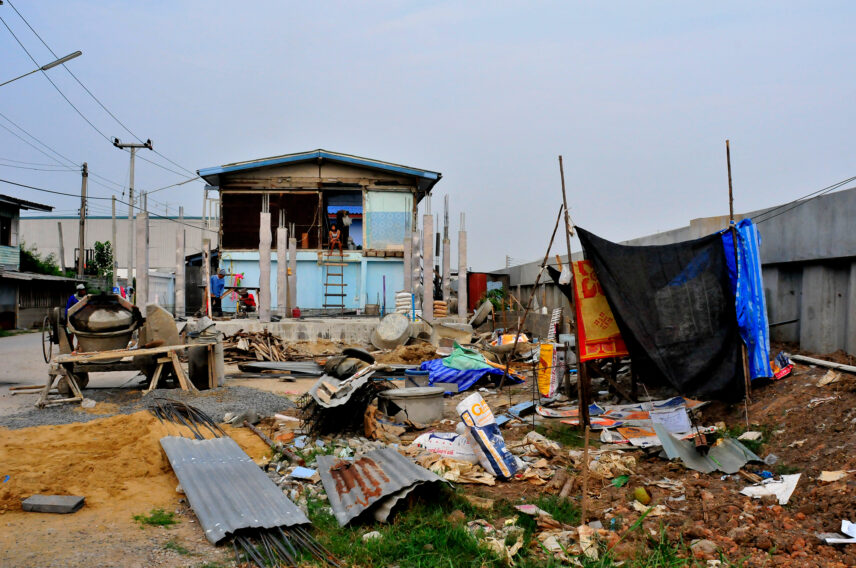 Just outside Thailand’s largest industrial estate, residents rebuild a flood-damaged home. Bernard Tschumi uses the phrase “architecture of disjunction” to emphasize the active, dynamic dimension of built structures in which form is always corralled within expressive practices and tense social relations. Architecture creates qualitatively divergent, fractured, and yet linked social spaces. In this photo I am intrigued by the tension between two forms of concretization, recalling Eli Elinoff’s exploration of an anthropology of the concrete (2019). On the right, prefabricated concrete panels are set up to 6 meters (20 feet) below ground, to a height of 60 cm above the flood level. The flood itself functions as a literal norm or measure for future risk. The area to the left is upstream from the estate wall, thus raising likelihood that the floodwall could decisively block drainage in a future flood. The foundation under construction sits some 20 cm below the 2011 flood level; using small-scale construction techniques, the contractor assured me it wouldn’t flood again. In interviewing the operations managers of the industrial estate, I found their thoughts were squarely centered on government mismanagement, and they had not considered future climate risk.

The view of the street is partially obscured by the silhouette of a wall. Through the opening in wall, bright neon lights, cars, and individuals on a motorbike are visible.
Credit: Jerome Whitington 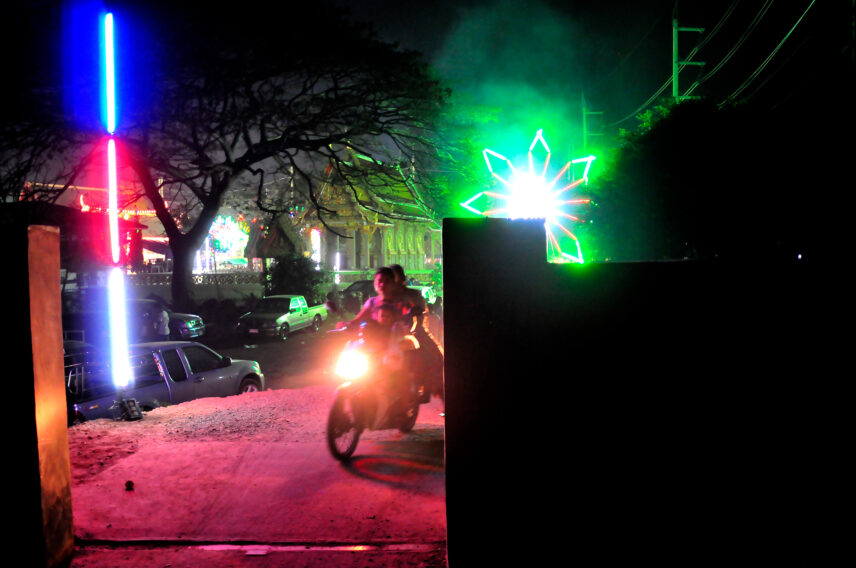 Life continues in Ban Pheun Nimit where the temple holds an annual fair. The town chief negotiated with the industrial estate for a gate to allow people to continue using a motorcycle path across the campus. The gate can hold a metal door secured in place when floods are expected. At this time (prior to the 2014 military coup), the town enjoyed considerable political patronage as an electoral stronghold supporting the then-current government. This contributed to residents’ sense that future floods would be avoided and reportedly influenced funding to reinforce the canal just upstream of the town.

Two people are on a structure in a river and constructing a column emerging from the river.
Credit: Jerome Whitington 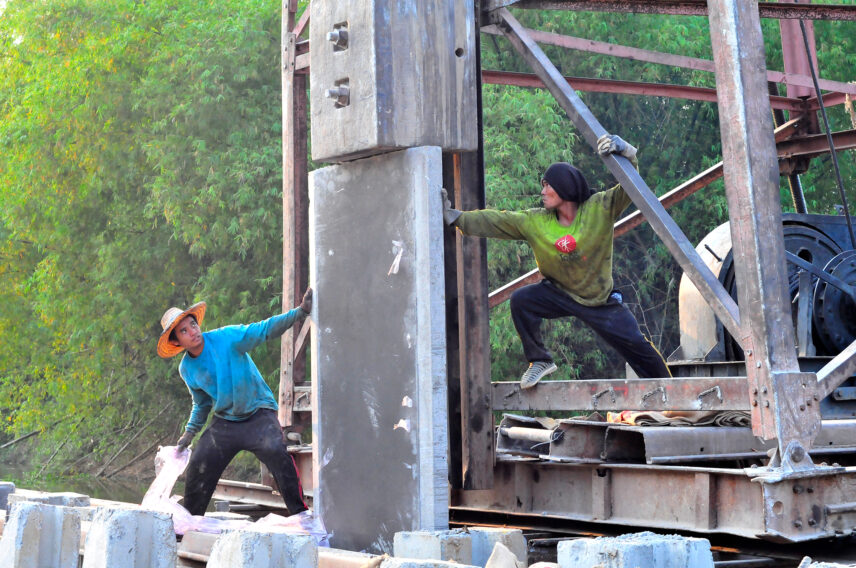 The flood prompted US$12 billion in government infrastructure investment, here in the form of a concrete wall along the earthen edge of a drainage canal. As elsewhere, infrastructure investment concretizes a right to stay dry manifest in further efforts to fracture the floodplain. For residents, the walls were not signs of exclusion from protection afforded to factories, but evidence of a kind of differential inclusion in which proximity to centers of power is marked by degrees of protection.

A long wall divides buildings and dwellings from a body of water. Trees, homes, and wires on poles are visible over the top of the wall.
Credit: Jerome Whitington 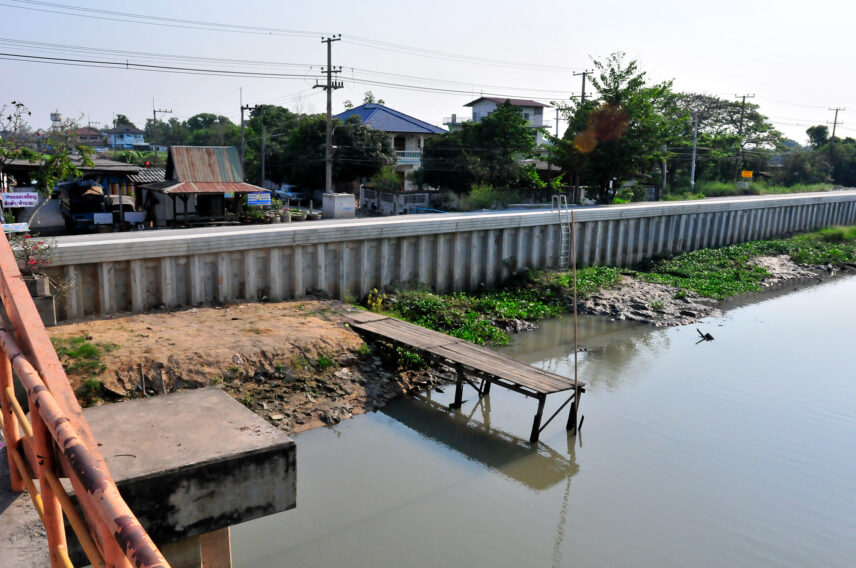 The new canal wall almost completely cut off access to the water, despite the fact that the canal was regularly used by residents for transportation, fishing, and recreation. As climatic disjuncture prompts citizenship demands for ecological security—a kind of modernist prerogative implicit in governing the earth—it also fractures socio-natural relations.

A wooden structure is elevated many feet off the ground. In the foreground, a raised walkway stretches across the photograph.
Credit: Jerome Whitington 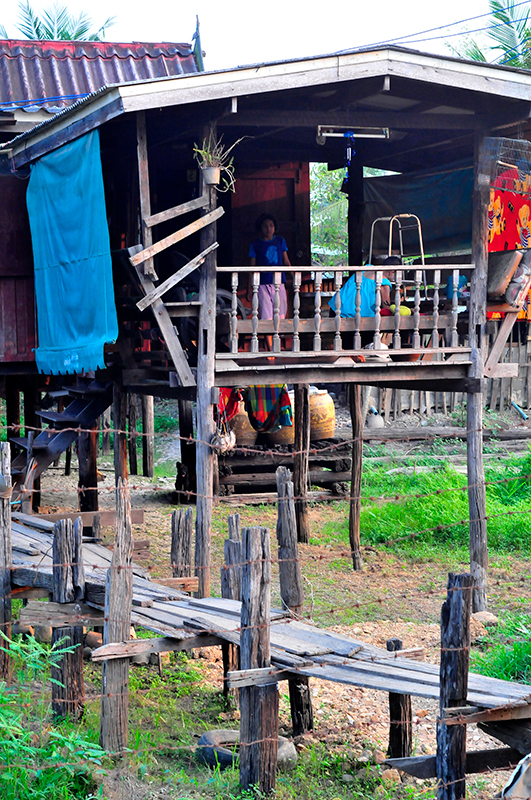 By contrast, living with water suggests a different architectural disjuncture, correlated to the temporal interplay between wet and dry and hailing an implicit ecological permeability. Bangkok’s new city of walls demonstrates that the distinction between wet and dry is neither as stable as commonly assumed nor can it be taken for granted.

Jerome Whitington is visiting assistant professor of anthropology at New York University. His most recent publication is Anthropogenic Rivers: The Production of Uncertainty in Lao Hydropower (2018). He is currently working on a book manuscript titled Experimental Earth: A Speculative Anthropology of Climate Change.