When Ben Wallace died in Dallas on October 29, 2021, anthropology lost one of its preeminent researchers in sustainable agriculture and agroforestry among nonliterate peoples. It began with his fieldwork with the Pagan Gadang in Northern Luzon (Philippines) in the 1960s, expanded to include farming systems research in Bangladesh in the 1980s, and shifted briefly to address multipurpose tree species in Thailand and Indonesian agriculture.

Ben’s field trajectory concluded in the 1990s with a multiyear research and development agroforestry project in the Philippines sponsored by Caltex Philippines and the Philippine Department of Environment and Natural Resources. This massive project (The Good Roots Project), for which Ben was primary investigator, took him abroad yearly—often with wife Ann—from 1991 through 2009.

Over the course of his prodigious career, Ben published numerous scholarly articles and over a dozen books. His final book, The Changing Village Environment in Southeast Asia (2006), is a capstone and summary of his years of fieldwork, and a revisit to his original sites portrayed in the well-received Hill and Valley Farmers (1970).

At SMU Ben became a valued department and university citizen, serving variously as department chair (two terms), vice president of the Institute for the Study of Earth and Man, and assistant provost and director of SMU’s International Office, where he supervised the numerous studies abroad programs. As chair, he was always a source of reason and wisdom, navigating the twisting political currents in academia as deftly as he paddled the braided tributaries of Luzon’s Cagayan River. His sometimes sarcastic humor often arrested brooding discontent in faculty meetings, and it was a joy to watch him maneuver.

Ben was a popular teacher, and both undergraduate and graduate students enjoyed his stories and anecdotes. He played a central role in developing the curriculum as the department enhanced our growing bachelor’s, master’s, and doctoral programs. He prudently guided students in cultural anthropology through the labyrinthine paths to the PhD, serving as dissertation supervisor for 20 graduates during his career.

Ben leaves behind his wife, Ann; a daughter, Laura (a son, Drew, passed away some years earlier); four grandchildren, and seven great-grandchildren. He also leaves faculty and friends grateful to have shared his companionship.

A man wearing a suit jacket, checkered shirt, and glasses stands in front of a bookcase and smiles. 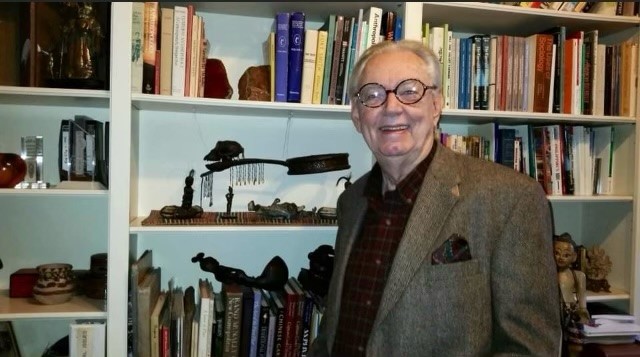