CASCA Local Organizing Committee members Pamela Stern and Jaime Yard on what to do in Vancouver this November.

The 2019 Annual Meeting of the American Anthropological Association will be held in conjunction with the Canadian Anthropology Society in Vancouver, British Columbia. Canada’s third largest urban center sits where the Fraser River meets the Pacific Ocean, surrounded by ocean inlets and snow topped mountains.

Vancouver is a very young city, first permanently settled by European and Asian immigrants in the 1850s. The city remains home to several Coast Salish First Nations, who have lived here for several millennia. If you arrive by plane, you will encounter multiple displays of Indigenous art, especially in the international terminal. Keep an eye out for Haida artist Bill Reid’s monumental and awe-inspiring Spirit of Haida Gwaii, The Jade Canoe in the international terminal near the footbridge to the Canada Line train into the city. c̓əsnaʔəm: the City Before the City, an exhibit at the Museum of Vancouver, tells a bit about the Indigenous history of this place. As is the case for most of British Columbia, non-Indigenous settlement proceeded without treaties, and Vancouverites live, work, and play on the unceded traditional territories of all but one of the local First Nations.

Metro Vancouver comprises nearly two dozen separate municipalities and a treaty First Nation. About a third of the approximately 2.5 million residents are immigrants to Canada, with the largest recent flows from China, India, the Philippines, the United States, and the United Kingdom. Vancouver’s rich cultural life and diverse culinary scene reflect waves of past and present immigration.

Like port cities around the world, Vancouver has deindustrialized and much of the waterfront has been redeveloped. The neighbourhood where the Vancouver Convention Centre (VCC) sits is called Coal Harbour, a reference to its previous economic life. There are, however, still active cargo terminals in Burrard Inlet. The ships you’ll see anchored in English Bay are “tramp steamers” waiting for an order to collect cargo from one of the bulk terminals.

Take in the city

Venture away from the VCC, you will find that Vancouver is a place of diversity. The city is safe, walkable, bike-friendly, and transit-accessible. Pack an umbrella and some rainproof footwear—it is rainy in November! Vancouver is one of the few large cities in North America without Uber or Lyft, but taxis are plentiful. They city’s bike share program offers the ubiquitous blue Mobi bikes; bring your helmet.

On foot or by bike

Stanley Park is a spectacular 400-hectare municipal park, almost on the doorstep of the VCC. The 10 km paved path around the park’s seawall is a popular walk and ride. There are also forest trails, sports fields, gardens, monuments, the Vancouver Aquarium, and places to eat and drink.

To the east of the VCC lie Gastown, the Downtown East Side (DTES), and Chinatown. Along Gastown’s cobbled streets you’ll find many restaurants, cafes, and gift shops mainly catering to tourists. Several alleys have been made into welcoming public spaces with bright murals and street furniture. Further along West Hastings, the DTES is Canada’s “poorest postal code,” a result of earlier municipal policies to concentrate sex workers, the homeless, and other marginalized citizens into this area of the city. That practice had some unintended consequences, and while inadequate housing remains a crisis, DTES residents are highly organized advocates for themselves and their neighborhood. Insite, the first supervised drug injection site in North America, has operated there since 2003. 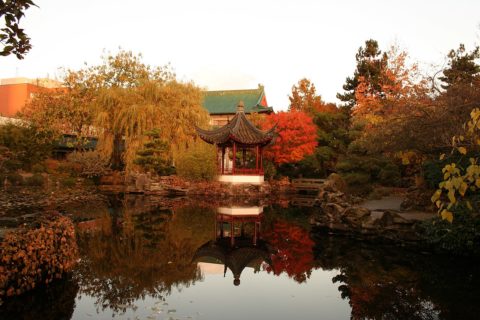 Along with the DTES, Chinatown is ground zero for current and past battles over gentrification and housing displacement. Just east of downtown, Chinatown is the site of some of the oldest Chinese-owned businesses and cultural organizations in Canada, though many of these institutions are being replaced by upscale restaurants and condominiums. The Dr. Sun-Yat Sen Classical Chinese Garden offers tours of this scholars’ place of repose.

CRAB Park, a few blocks east of VCC, is another contested space. The park is on federal land being eyed for port expansion. This downtown beach, created by citizen activists, hosts a memorial to Canada’s Missing and Murdered Indigenous Women and Girls.

To the south of the VCC, the Bill Reid Gallery on Hornby Street is a public gallery displaying art by the famed Haida sculptor and other Northwest Coast Indigenous artists.

The Olympic Village, on the southeast side of False Creek not far from Science World’s geodesic dome, was built as the athletes’ village for the 2010 Winter Olympics. Now a condominium and commercial district, the landscape architecture evokes a maritime theme with bridges representing Indigenous canoes and light standards mimicking the ribs of ships. Rowing and dragon boat racing clubs, microbreweries, and the one of the finest ice cream shops in the city are nearby. From Olympic Village you can go south on Main street to find a wide variety of coffee shops, restaurants, and clothing boutiques. If you go west from Olympic Village along the foot and bike path you will reach Granville Island, another reclaimed industrial site, and now home to artisan workshop-galleries, public art, restaurants, a popular public market, and a brewery. 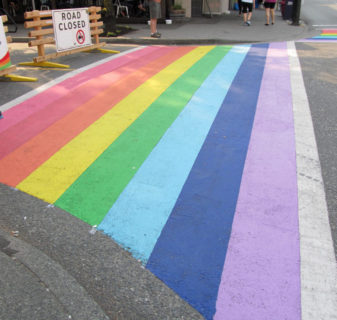 Davie Street between Burrard and Denman Streets is Vancouver’s historic gay village and remains a centre for LGBTQ+ businesses and organizations.

The public transit system includes buses, an elevated train system (SkyTrain), and a passenger ferry (Seabus). Riding the SkyTrain is a cheap and easy way to tour Metro Vancouver. The Canada Line connects the airport and Richmond to downtown Vancouver; the Expo Line connects downtown to the eastern suburbs, including New Westminster and Surrey; and the Millenium Line also goes east through Burnaby to Coquitlam and Port Moody. For the best views, sit at the front of the first car (the train is driverless). A one-day pass costs C$10.50 ($8 for seniors) and allows unlimited rides on all buses, trains, and the Seabus. Day passes can be purchased from machines at any SkyTrain station. Plan a route using TransLink’s trip planner.

Your conference badge will entitle you to discounted admission at most local museums. Of particular interest are the Museum of Vancouver at Vanier Park, and the Museum of Anthropology (MOA) at the University of British Columbia. MOA is opening a ceramics exhibit on the evening of Thursday, November 21, and admission will be free. The #44 bus at the intersection of Cordova and Granville streets passes close to Vanier Park en route to UBC.

Steveston Village, which sits at the mouth of the South Arm of the Fraser River, is an historic fishing town within the city of Richmond. A walking path along the dyke connects the historic Gulf of Georgia Cannery, operated by Parks Canada, the west coast commercial fishing fleet, a fisherman’s wharf, and the Britannia Shipyards. Restored buildings at the last of these include a bunkhouse for Chinese men who came to work in Canada in the late nineteenth and early twentieth centuries and the pre-internment home and garden of a Japanese Canadian family. Take the Canada Line train to Brighouse station and then the #401 bus to Steveston.

New Westminster, also on the Fraser River, was British Columbia’s original capital. Once an industrial and commercial rival to Vancouver, this city of 70,000 people also has a walkable waterfront where there were once lumbermills, shipbuilders, and shipping wharves. When the salmon are running, you can spot bald eagles or harbor seals. While nearly all remnants of the industrial city are gone, quite a few Edwardian period and a few Victorian era commercial and residential buildings remain. Both the New Westminster Museum and Archives and the New Media Gallery in the Anvil Centre are free for visitors. Take the Expo Line to New Westminster station.

Take the Seabus to the North Shore of Burrard Inlet to explore North Vancouver. Part of the transit system, the Seabus crosses from Waterfront Station to Lonsdale Quay every 15 minutes on weekdays and every 30 minutes on the weekend. There are restaurants and shops and great views of Vancouver’s glass-towered skyline. North Vancouver has a large Persian enclave that you can learn about at the Polygon Gallery—a short walk uphill from the Seabus terminal.

If there’s something in particular you’d like to see while you’re in town, be sure to ask a local. We’re organizing a few walking tours and curators’ tours at galleries and museums. Looking forward to seeing you in November!