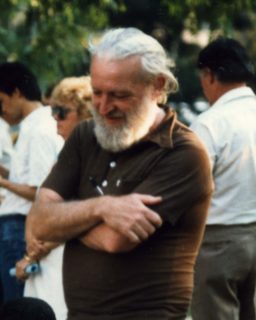 Loring Brace IV, University of Michigan human paleontologist, passed away on September 7, 2019. Educated at Williams College (1948–1952, BA) and then at Harvard University (MA 1958, PhD 1962), a student first of Earnest Albert Hooton, then W. W. Howells, Brace was known for his insistence that Europeans had a Neanderthals ancestry, his conviction that historical influences shape contemporary paleontology, his outspoken criticism of “race” as a concept and his playful use of “poetry” to illuminate his scholarship.

In Brace’s first significant article he made what he felt was a clinching argument that there is nothing in the skeletal morphology of Neanderthals to exclude them from the human lineage. When he realized this rather gentle nudge to the paleontological establishment had shifted perceptions little, he gave the establishment a shove two years later with “The Fate of ‘Classic’ Neanderthals,” a conspicuously un-gentle elaboration on his Neanderthal ancestry theme. In “Fate” he characterized the failure of paleontology to admit Neanderthals (not to mention earlier hominin fossils) into the human lineage as antievolutionary, as governed—perhaps subconsciously—by an obsolete Neoplatonic essentialist mindset that inclined fossil researchers to accept ancestors only if they differed little or not at all from their descendants. “Fate” is Brace’s most cited article.

Brace was the first to champion the idea that culture plays a vital role in hominin morphological evolution, for two reasons. The human “cultural niche” is so broad, he argued, it precludes speciation. This theoretical perspective drove his “single-species hypothesis.” Cultural practices had a further important effect: they relaxed selection pressure that had maintained a robust musculoskeletal system, precipitating a decline in robusticity.

From his first publications, Brace was a tireless debunker of the “race” concept, arguing that human features varied in a clinal pattern, that so-called racial characteristics varied gradually over space, that anatomical features did not vary together, and that human traits were not consistent within “races.” In his masterwork on human variation, “Race” is a Four-Letter Word (2005), he traced the origin of the concept of race to the nineteenth century United States where the peculiar American experience prompted racial thinking. Only in the United States could one find displaced representatives of normally widely dispersed populations: European colonists, African slaves, and Chinese railway workers were all juxtaposed to Native Americans and one another without their intervening clines.

Brace made bioanthropology aware of just how plastic is the human skeleton, emphasizing the role stresses on the musculoskeletal system during growth and development played on the form of the adult.

He used facial measurements to show that the Ainu, but not other Japanese, are the descendants of the first occupants of Japan, the Jomon people. He presented evidence that an ancient Jomon-Pacific population was once widely distributed among the Pacific islands and along the Pacific Rim; these indigenous folk peopled the Americas.

Although his research was influential and original, Brace was also an active book reviewer known for his sharp (some might say harsh) criticism.