Catching Birds in the High Arctic

There is more than one way to eat a dovekie in northern Greenland: they can be eaten frozen, boiled, or whole (excluding the feet and beak). In the past, many dovekies were prepared and stored for the long winter in one of two ways. First, a hunter could simply cache the birds under stones to keep hungry foxes and dogs at bay. The cool temperatures of the High Arctic kept meat chilled, allowing for some caches to be kept for several years with only slight putrefaction. Alternatively, hunters could ferment them as kiviaq, a dish prepared by stuffing a blubber-coated sealskin with hundreds of unprocessed dovekies and storing it under a pile of rocks for several months—transforming them into a ripe-tasting cheese-like food considered a delicacy among Inughuit today.

Dovekies (Alle alle), also known as Little auks, are small alcids weighing an average of 200 grams. Their wings are adapted for underwater flight to pursue zooplankton (Calanus copepods), which becomes readily available in northern waters in the spring. Coinciding with the zooplankton blooms, dovekies arrive in northern Greenland from their winter habitats for the short Arctic summer. Breeding in the millions, these birds have played an extensive role in the subsistence of the peoples of northern Greenland for millennia (Darwent et al. 2019; Johansen 2012). 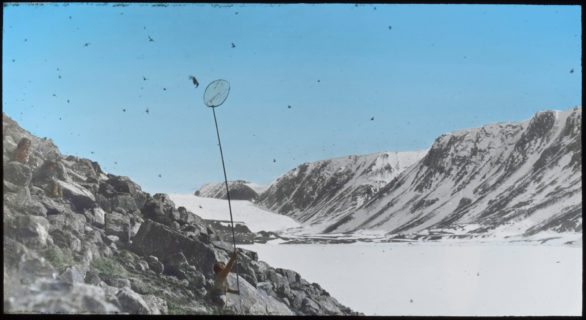 During the breeding season, dovekies nest on rocky slopes near productive zones such as polynyas—areas of open water surrounded by sea ice—but live and feed offshore the rest of the year. The Thule district of Northwest Greenland hosts roughly half of the world’s dovekie population—around 15 million breeding pairs (Boertmann and Mosbech 1998)! They may be small, but these birds have potentially large effects on many facets of their surroundings. The influx of birds results in large quantities of marine nutrients in the form of guano, which enriches and fertilizes the soil and the generally sparse Arctic vegetation of lichen and grasses. In turn, this verdant florescence attracts terrestrial mammals such as muskox, hare, fox, caribou, and humans to the area.

Dovekie colonies developed in Greenland around 4,000 years ago (Davidson et al. 2018). Their presence as large and seasonally localized resource patches appear to have influenced human settlement patterns in this region for at least the past 1,000 years. The archaeological culture recognized as Late Dorset irregularly occupied regions of Northwest Greenland circa AD 750 to 1400. Representing the terminal phase of the Arctic Small Tool tradition (ASTt), Late Dorset material culture is renowned for its elaborate bone and ivory carvings and large structures known as long houses as well as the absence of certain subsistence technologies that appear at Early Dorset sites, including watercraft and bows and arrows (Appelt, Damkjar, and Friesen 2016). 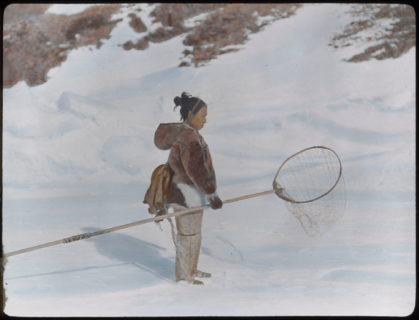 Around AD 1200, a new group arrived in Northwest Greenland. The Thule people are generally recognized as the ancestors of all modern-day Canadian and Greenlandic Inuit and Alaskan Inupiat. Although genetically and culturally distinct from the earlier ASTt groups, there is no agreement on whether the two cultures ever interacted; or, if so, whether this interaction may have served as a causal relationship with the disappearance of all ASTt people. The first Thule migrants brought technologies such as the bow and arrow, dog-sled transport, and whale-hunting boats (umiaks), allowing for the efficient capture and transport of large terrestrial and sea mammals, as well as the movement of humans across the region.

As descendants of these Thule migrants, the Inughuit of northwestern Greenland are the most northernly Indigenous people in the world and speak Inuktun, a distinct dialect of Inupik. Interestingly, between AD 1700 and 1818, the bow and arrow, fishing leisters, and kayaks were no longer a part of their material culture (LeMoine and Darwent 2016). The “loss” of similar technologies by both the Late Dorset and Inughuit is striking, and may have had implications for the foraging decisions taken by these two High Arctic groups.

Northwestern Greenland was a hub for polar exploration, with Euro-American contact beginning in 1818 and continuing into the twentieth century, resulting in a rich ethnographic record; these records include firsthand accounts on how Inughuit hunters captured and processed these small birds. Loose rocks and near vertical cliffs made dovekie harvesting a rather dangerous activity; yet, accounts note that the eggs and nesting dovekies were collected by nearly everyone—men, women, the young, and the old (Ekblaw 1927). The Inughuit raised large nets made of sealskin lashed to long poles constructed of narwhal tusk and driftwood into the air, catching dovekies as they flew by. In this manner, a single Inughuit hunter could capture approximately 10 dovekies per netting.

Previous and ongoing zooarchaeological research suggests that dovekies have been a significant part of both Inughuit (Thule) and Late Dorset subsistence in particular areas of Greenland for a period spanning 1000 years (see for example, Johansen 2013). Less is known about the bird harvesting strategies employed by the Late Dorset; however, current zooarchaeological analysis from excavations at lita (Etah) in 2012 and 2016 may help us to understand what technologies or strategies were used by the Late Dorset to exploit the valuable resource patch. 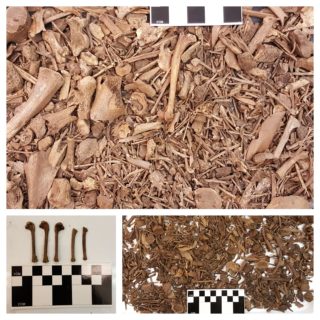 Located on an elevated alluvial fan, the downhill movement of sediment at Iita resulted in the development of stratigraphic layers, essentially sealing each cultural deposit (Darwent et al. 2019). The presence of stratified deposits is unique for the High Arctic due to the slow development of soil in its extreme environments, which often results in artifacts from multiple time periods being exposed and combined on the surface. The circumstances at Iita present a novel opportunity to observe the changes in the use of animals as resources over time.

I have completed examination of over 4,200 faunal specimens (bones or fragments thereof) thus far. Birds (dovekies and other birds) account for the largest portion of identified taxa, with dovekies comprising 63 percent of all the identified taxa (n=1,239). Although the Late Dorset and Thule are culturally distinct, some degree of similarity between the Late Dorset and Thule faunal assemblages may be expected as a result of both groups occupying the same locality and associated environmental constraints (Howse and Friesen 2017). However, there are broad shifts in the diversity and frequency of taxa exploited over time.

Initial results indicate that dovekies account for approximately 35 percent of the identified faunal material recovered from Late Dorset deposits and around 80 percent of historic Inughuit deposits. The Late Dorset deposits are more taxonomically even, meaning that not any one taxon dominates the faunal composition. The Late Dorset were taking bird, seal, and small game in relatively the same proportion. This pattern is not seen in the Thule and historic Inughuit levels, which have low taxonomic evenness and are dominated by a single taxon: birds.

As a faunal analyst operating under a behavioral ecological framework, I interpret certain changes in faunal remains as changes in human foraging efficiency through time and space. The fluctuation in abundance of different faunal remains can generally be attributed to a fluctuation in a forager’s efficiency, whether due to the effects of technology on the ability to efficiently capture certain prey, changes in the environment, or shifts in prey populations. Examination of the frequency and diversity of taxa exploited at Iita throughout time can help me to understand long-term changes in subsistence patterns. These preliminary results indicate that the Late Dorset had a broader diet as compared with the later Thule occupants at Iita. Therefore, the narrow diet of the Thule/Inughuit indicates prey specialization via intensified use of the bird colony. 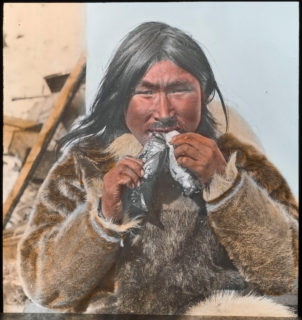 Various historic accounts depict the relatively simple dovekie processing techniques. Sometimes no processing was required, such as in the case of kiviaq. Other times, the wings and legs would be removed, the breast meat eaten, and the fat sucked clean from the skin (Johansen 2012). Information gleaned from the remains of past activities through archaeology can be compared to these historic activities captured through ethnography. The archaeological record can act as a check on those accounts, essentially asking if the two lines of evidence agree. Likewise, the frequency of skeletal parts in an assemblage can reveal how animals were used. Skeletal elements of the wing are the most frequently recovered, closely followed by elements of the axial body. Dovekie humeri (upper wing bone) compose 40 percent of both the Late Dorset and Thule wing count, while ulnae (lower wing bone) contribute 30 percent to the Thule/Inughuit wing count. Tibiotarsi (lower leg bones) are the most frequent leg element across all cultural levels. Completion of the faunal analysis will reveal if there are distinct patterns in the remains between each cultural level.

Further, taphonomic signatures such as the presence (or absence) of cut marks, fractures, and burning are used to interpret how individual animals were processed prior to consumption. There are several possible reasons why dovekie cranial elements are found less frequently; perhaps it is because they are thin, fragile bones that tend to break and preserve poorly. Alternatively, the dearth of these bones may be attributed to the type of processing prior to consumption. Post-contact Inughuit would crush the heads of dovekies with their teeth, instantly killing the bird prior to consuming the body (Johansen 2012).

Examining the use of dovekies by these two cultural groups presents a unique case for optimal foraging models, which predict the decisions a forager will make regarding what, when, and where to eat. Individual dovekies are small energy packages in terms of the number of calories that an individual bird provides; harvesting each bird individually would be suboptimal in most situations. Fortunately, mass capture technology (nets) increases the amount of energy that a forager can harvest. When taken en masse, dovekies can provide an energetically efficient and stable source of food. Due to their small body size, dovekies have been considered a food only eaten in times of starvation (Ekblaw 1927); however, there are little or no costs associated with processing each dovekie before consumption. Dovekies, being relatively easy to capture and easy to eat, may therefore have been considered a highly preferred resource by the time of historical contact.

Despite the extensive exploitation of seabirds by peoples around the world, few zooarchaeological analyses have highlighted the important role they play in hunter-gatherer subsistence. In the case of Iita, the archaeological record both complements and enriches the ethnographic record. Although only present in Northwest Greenland for a few months, dovekies provided a source of food year-round as they were hunted and stored for winter consumption. Dovekies were essential to Inughuit summer subsistence, especially because Inughuit groups just prior to Euro-American contact did not have watercraft technology, limiting their access to other marine resources. Dovekies may have been a resource that increased in importance when preferred foods such as seal, caribou, and muskox were scarce. The intensified use of these small birds may have been due to the predictability of their yearly return, the ability to capture them in large numbers at once, and the low processing costs associated with their procurement.

Erika Ebel is a PhD student in anthropology at the University of California, Davis. Her research interests include the study of archaeological animal bones, the Arctic, and hunter-gatherer subsistence. This research is facilitated by funding from the National Science Foundation and collaboration with the Peary-MacMillan Arctic Museum, Bowdoin College, and the Greenland National Museum.