Compromise, Complicity, and the Rule of Law

Russia’s expulsion from the Council of Europe revealed the fragility of the rule of law and existing legal systems when faced with state violence. The stakes in balancing hope in justice with formal institutional mechanisms that rely on compromise and consensus are high.

On Saturday, March 12, 2022, on a walk with my children, my older son Gabriel paused in front of the Agora building, which houses Council of Europe (hereafter CoE or Council) offices, in Strasbourg, France. He pointed to the placard listing the basic statistics for Council membership, alongside a map and the flags of every member state. Sometime in the past few days, someone had taken a black, permanent marker, drawn a large, thick X across the number 47 (for 47 Council members) and written the number 46 in bold, block letters. Russia’s flag, in the upper right-hand corner also had a large X through it. Russia had just recently been suspended from the Parliamentary Assembly of the Council of Europe, the legislative body of the Council. By the following week they were formally expelled.

From June 2021 to August 2022, I resided in Strasbourg, working on a book on the European Court of Human Rights (ECtHR) and the European Convention on Human Rights (ECHR) system.  In the book, I examine how people reconcile ambitious visions of human rights as a path to social change and their commitments to formalist, institution-driven notions of justice. This balancing act reveals the generative possibilities and the limits of rule of law as a collective social achievement.

A long, vertical placard is attached to a fence. It lists the states who are members by flag and indicates that there are 47 member states. The seven has been written over with a six in black marker, so that it reads “46 member states.” The Russian flag is crossed out with black marker as well.
Credit: Jessica Greenberg 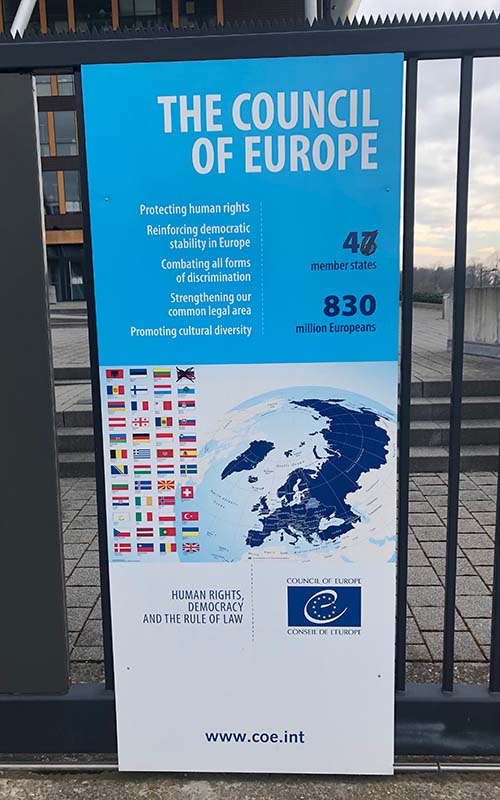 Council of Europe sign with a marker line through Russia, Strasbourg 2022

The project follows on my first book, After the Revolution: Youth, Democracy and the Politics of Disappointment in Postsocialist Serbia (2014). That work examined both the hopes and the disappointments that accompanied the practice of democracy in post-Cold War Europe. In my new research I have followed these tensions in democratic practice to one of Europe’s most iconic postwar institutions: the European Court of Human Rights. It is the judicial body that oversees member states compliance with the ECHR, and it is housed in the Council. My broader research project, which I began in 2016, examines the ways in which human rights law shapes a semi-coordinated discursive and epistemic community through which people ask (and respond to) questions about collective European futures. These questions came to a head in a devastating way, with Russia’s invasion of Ukraine in February 2022.

Russia’s expulsion, and the war that prompted it, raised questions about how to shore up legal and democratic institutions, while also coming face to face with their limits. Most people I spoke with in the Council agreed that the scale of violence, Russia’s violation of international legal norms, and the urgent need for solidarity with Ukraine made expulsion inevitable. At the same time, drawing a clear line raised questions about past complicities and future sustainability. In interviews, people wondered whether they had waited too long to sanction Russia. Should they have done so in 2014 after the first war in Ukraine? When was it possible to know if a country had gone too far? And if the Council had taken a stand in this case, what ought they to do when other countries refused to comply with the standards and practices that held the system together?

This sense of the fragility of the rule of law was not wholly new. At the close of the Second World War, European intellectuals and politicians tried to rebuild a devastated Europe by forging new institutions to a secure a lasting peace. But the need for consensus also led to tremendous compromise and multiple exclusions. The resulting vision, simultaneously capacious and technocratic is exemplified by the dual function of the European Court of Human Rights as the self-proclaimed “conscience of Europe,” and a legal institution bound by doctrinal and practical deference to sovereign state power. As Douglas R. Holmes has addressed in his work, this balance between the promise of a better world, and the limited means through which to enact that vision has defined much of the contemporary pan-European institutional landscape, as well as the backlash against it.

The flags of Ukraine and Luxembourg fly side-by-side extending off the side of a stone building.
Credit: Jessica Greenberg 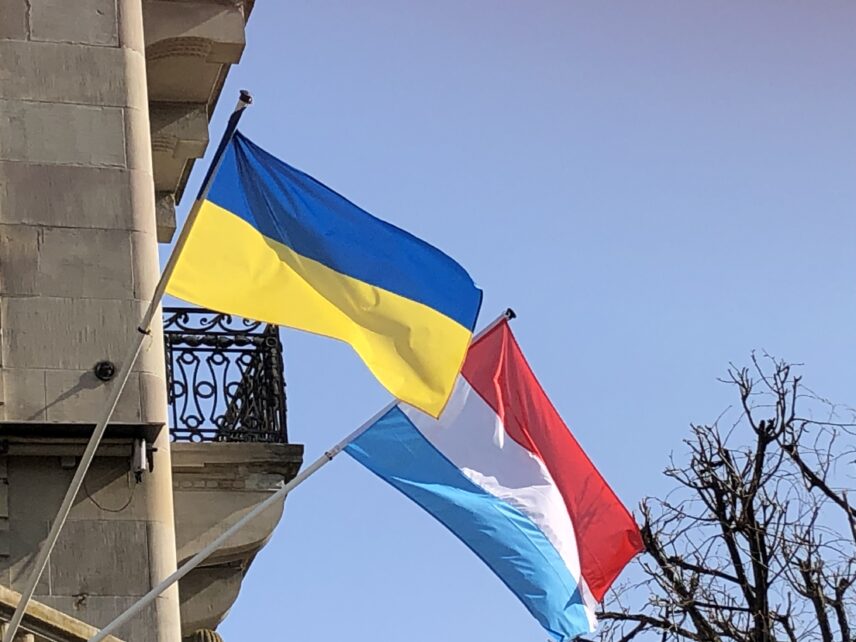 State buildings, Consulates and seats of CoE permanent representatives across Strasbourg flew flags in signs of unity with Ukraine, Strasbourg 2022

People working within the Council are aware of these limits and compromises in granular ways. In an interview with a long time Council staff member, with extensive experience in human rights and rule of law programs, he noted that the “rule of law is not a definition but a process.”  His awareness of the flexibility and context of normative categories was built into his understanding of institutional power. Such power, he noted, was largely persuasive, based in communication and consensus. It came from the Council’s ability to convince states that it’s in their interests “to have a system where member states comply….” and that “it is better “to be in the system than out of it.” This vision had its limits, he confided. Indeed, the 2008 economic crisis and COVID-19 brought home the costs of formal democracy and human rights, particularly when “social rights were sidelined.” For too many people, he told me, there is “a feeling that the democratic process leads to nothing.” It took those committed to democracy “within this Council framework…too much time to realize that democracy needs to provide hope.”

Yet compromises within the institution also allowed this staff member and others to forge some paths forward. On the one hand, visions of democracy, rule of law, and human rights were always partial. On the other, they allowed for responses in real time to egregious instances of violence. He told me that several years ago he was on a mission to a Council member country where they were investigating prison conditions. They visited the cells where detainees were held in isolation in “terrible, terrible conditions.” After encountering a prisoner in these conditions, they negotiated with the state and prison representatives. They agreed that if the prisoner could be moved to better conditions, the Council delegation would not publicize the clear human rights violation he had suffered. What should they have done, he wondered. Was it “braver” to call out the human rights violation or to compromise and work within the system? Which was better for the victim? In short, he was working through when and how one should engage in compromise within institutions that allow incremental steps forward, and when to draw a hard line and refuse the terms on offer.

My interlocutor was not alone at the Council in having questions about complicity, compromise, and ethical lines in the sand. With Russia’s expulsion people experienced both an increased sense of urgency about shoring up the system and reflected on the limits of a rule of law institution that includes noncompliance. For example, in 2022 I had the privilege to attend a two-day conference of human rights scholars, lawyers, and advocates from across Europe. On the agenda was a way to improve implementation of ECtHR judgments, particularly in the so-called difficult countries. These are countries that have records of systematic human rights violations, and a series of judgments that call for structural, legislative, and policy reform. The violations against these states speak to some of Europe’s most egregious forms of state violence. If the Council of Europe could be decisive enough to expel Russia, should it not also sanction other member states whose noncompliance with judgments might make a mockery of the system itself? If so, participants wondered, what kinds of sanctions would actually be effective? What were the costs of keeping such noncompliant members in, versus losing channels of communication and pressure, were they to leave the system altogether.

A long, multistoried building dominates the background and a line of many different flags is planted in front of it. Before the the flags, a blue sign reads “Council of Europe Conseil de l’Europe.”
Credit: Jessica Greenberg 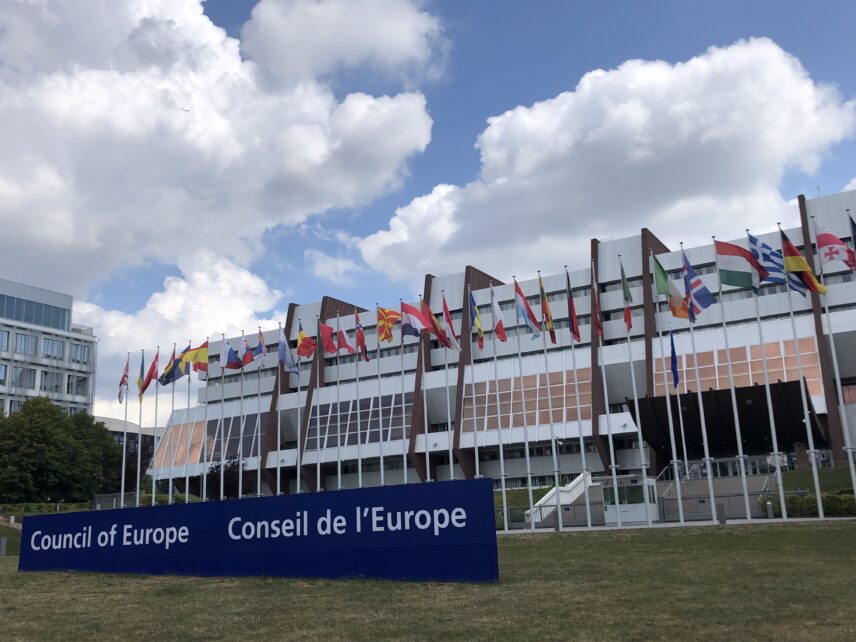 Legal responses to political problems will always be partial and in many ways unsatisfying. Yet as years of scholarship in sociolegal studies has demonstrated, law does important social, ideological, and affective work. If the rule of law is a social fiction it is nonetheless a generative one. There are alternative ways to think about the social and political work of legal categories and institutional frameworks, beyond normative assessments of success or failure. Such concerns are driven not only by scholarly curiosity but the everyday problems people face in making the law stretch to address pressing concerns, while still carefully guarding institutional legitimacy. In the context of lawfare, authoritarianism, and constitutional capture, those engaged in institutions like the Council and Court are asking how flexible systems based on compromise, diplomacy, and goodwill can be before they break. And, if the answer is very flexible, does that mean the institution itself is ethically compromised and politically weak? In an era of juridical politics, the stakes in balancing hope in justice with the limits of formal institutional mechanisms are high. Those who have used human rights to engage in decades of activism, organizing, and coordination to make the system work must figure out how to adapt to shifting goals and newly drawn lines.

Finally, confronting the fragility of the rule of law raises important questions about the role of scholarly critique. Human rights institutions are “not enough,” writes Samuel Moyn. But they can also be socially efficacious and meaningful. Normative institutions and categories can offer important ways to take ethical and political stands: to draw lines and take stands against forms of state violence. In the wake of post-Cold War triumphalist narratives, many scholars writing about postsocialist transformations felt intellectually and politically obliged to critique the categories through which emerging democracies were managed and policed. They sought to think beyond East and West and pose critical questions about the exclusions of liberalism. In recent years, with a rise in democratic backsliding, illiberal politics, and neofascism, it has been more difficult to know how those critiques will circulate and land and how they impact progressive advocacy and political struggles. These realities necessitate multiple alternative approaches to institutions―ones that ask what they do within and potentially beyond the formal categories through which they operate. Anthropologists in and of Europe might take this moment to ask how to both support calls for democracy among our interlocutors (and ourselves) and still think critically about the terms of ethics and politics on offer. Pluralizing justice means both understanding institutions and thinking with and beyond them.

Jessica Greenberg is an associate professor of anthropology at the University of Illinois, Urbana-Champaign. She served as the coeditor of the Political and Legal Anthropology Review (PoLAR) and published After the Revolution: Youth, Democracy, and the Politics of Disappointment in Serbia.