Conversation across Generations, Part One

The ASA-sponsored roundtable “Conversations across Generations” began at the AAA meeting in 2015, when Phil Singer’s documentary interviews with older anthropologists were screened, focusing on their “final fieldwork.” In response to the vibrant conversations these generated, in 2017 and 2018 Sid Greenfield and Pablo Lando organized Conversations ACROSS the Generations, something we hope to continue in 2019. The following, together with a subsequent piece, are by younger participants, discussing their roles and reactions.

At the 2018 AAA Annual Meeting, we gathered to talk across generations about how fieldwork has changed and how its transformations might be interpreted alongside transformations in the discipline. Technology has made field experiences radically different. Before, those who did research abroad were isolated; traveling and staying in touch with one’s family and peers were complicated. Today, most anthropologists are online while they are in the field and can travel back home with relative ease. Other aspects of fieldwork—perhaps those that matter most—remain unchanged.

William P. Mitchell spoke of his research: “During my first fieldwork, in 1973, I was once on top of the pile of coca leaves on a truck, at about 11,000 feet above sea level. I was coming back, going into the city and, as anyone who knows the Peruvian Andes will understand, I had had a couple of drinks. So I’m on top of this pile of coca leaves, and it was August, at night, there were shooting stars over this brilliant sky, and I said to myself: I am the luckiest person on earth, I am the luckiest person on earth. That’s how I felt, I felt so lucky, so gifted!”

I too have had this feeling. In my first attempt at field research I experienced it as a revelation: alone, in a small city in Hungary where I made myself understood by drawing on napkins, people’s lives were not that different from mine. I saw this clearly in a restaurant, surrounded by families, couples and groups of friends out for the night. The thrill came from knowing I was among them, one more person going about what could have been his daily life, if only I had not been 6,000 miles away from home. I guess Mitchell’s elation, and my own, came from suddenly knowing we were at home in the world. 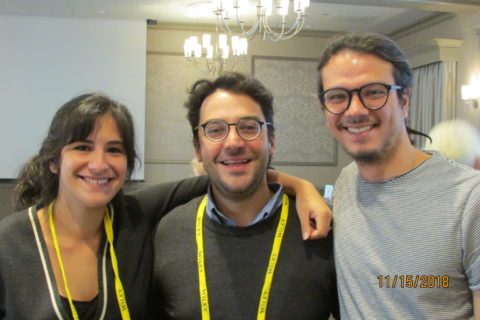 After finishing fieldwork for my dissertation in a Mexico City housing project, I made another discovery. I was in the library, writing about eighties gangs when I remembered Rockdrigo, a musician who sung about the working class and died tragically in the 1985 earthquake. I played his songs online and was overwhelmed. That was how my interlocutors felt. I never encountered Rockdrigo’s music during fieldwork, but it was as if it had been playing all along. I posted “Ballad of the Wage Laborer” on Facebook and dozens of people from my fieldsite—and nobody else—commented on it. In my notebook I wrote: Doing fieldwork involves figuring out what it feels like to be at home for others.

While I am glad to have learned what home might mean for others, today I espouse a less heavy-handed definition of fieldwork. As Jeffrey Ehrenreich suggested in our roundtable, fieldwork can be romanticized as both enjoyable and capable of revealing the core of different cultures. In practice, fieldwork is varied. It might be unpleasant or insufficient; it might get us nowhere. Sometimes it develops over decades, with multiple expeditions. It can also be short and problem-driven: “What’s important,” said Ehrenreich, “is to remember there are multiple methodologies, multiple ways to approach what we study.”

Ehrenreich also suggested we pay attention to fieldwork’s limitations. This might help put aside the pretension—so common in recent years, as anthropology purportedly loses relevance—that we are necessary because we offer a unique vantage on world problems. I suspect we’re as necessary—and as precious—as poetry. When I teach introductory classes on anthropology, I start with a story by Jorge Luis Borges called “The Ethnographer.” It is about an anthropologist who lives among the Plains Indians, is initiated to their ritual life, returns to his university and decides not to write a dissertation. He’s free to divulge what he has learned, and could express it in plain language, but chooses not to. We never learn why.

I started thinking of “The Ethnographer” as a text on field methods after a mathematician explained to me the impossibility proof, which demonstrates, mathematically, that not everything can be proved mathematically. I read “The Ethnographer” as our impossibility proof: it suggests that our work is not about identifying and describing cultural patterns, structures of kinship, rituals or systems of belief, but about attempting to characterize these phenomena through the lens of our individual experiences. The fact that our knowledge cannot be abstracted from our personal lives establishes limits to what we can know and communicate.

The lack of thoroughness participants in the roundtable identified in our training in field methods—historically and in the present—makes sense. There is no one way of practicing ethnography, nor is there one desired outcome. Barbara Joans expressed this decisively. In her seminars, Margaret Mead offered precise advice on how to conduct research, but Joans ignored it: “She sat at the edge of her table and said, ‘Here are these rules, this is what you should all be doing. If you don’t do it, be very creative. It’s what’s in you that you bring to the field and that bring back.’ And that’s what I learned from her.”

Thinking in this vein, we can identify not only texts as the products of fieldwork, but also the life histories of those who produce them. In Mitchell’s words: “We assume that we remain the same. But there was the 27-year-old Bill that went into the field. It was through the process of fieldwork that I became this Bill, the second Bill right here with you. After fieldwork, we are not the same persons that we were.” We can also go back to the pile of coca leaves on that Andean truck and see it not as an idealized moment but as part of a more complex—more poignant—social field: “The loneliness can be unbearable! I was in Peru for two years. As I was heading towards the end, I had a calendar, and I was crossing off the days. Even as I felt lucky! We can have multiple feelings about the same thing.”

Pablo Landa obtained his PhD in anthropology from Princeton in 2015. He works as an architecture- and photography-curator in Monterrey, Mexico. Since 2016, he is a member of the ASA and has participated in four “Conversations across generations.”