How has the heightened digital mediation brought about by the pandemic reconfigured sociality, intimacy, ideas of “normalcy,” and even ethnographic practice itself?

In the summer of 2019, I set off to begin my yearlong dissertation fieldwork on Social Networking Services (SNS), smartphone ownership, and digital sociality in Japan. During the first half of my fieldwork, I was immersed in in-person interactions with my interlocutors—high schoolers, university students, and postgrads in their mid-twenties who were avid users of platforms such as Instagram. In our conversations on the role of SNS (the local term for social media) and smartphones in everyday life, youths told me that social media and smartphones were often a “normal,” or even “natural,” part of their lives. However, this perception has changed due to the global outbreak of COVID-19, which coincided with the second half of my fieldwork. The pandemic has reconfigured the embeddedness of digital mediation. Youth interlocutors came to question what they used to think as “normal” in pre-pandemic digital sociality, even reconsidering the idea of normalcy itself. They confessed a desire to share the same space as their friends, to be able to touch and hold them. This seemed to suggest the extent to which digital sociality is constituted by in-person sociality. This was highlighted by the pandemic, when social media and smartphones became the primary means of communication. In turn, I began to deeply consider the ethical implications of my own digital communications with interlocutors.

Although social media and smartphones are perceived to be ubiquitous, these technologies are localized within particular historical and societal contexts. In their ethnographic projects spanning across multiple countries, Daniel Miller and colleagues have highlighted how the nuances of local context impact how people use and transform these technologies in their everyday lives (Miller et al 2016; Miller et al. 2021). Japan has been at the forefront of mobile Internet technology since the 1990s. The smartphone fits within the rich genealogy of keitai (mobile phones)—what Mizuko Ito calls a “snug and intimate technosocial tethering” that translates literally to “something you carry with you” (2005, 1). Prior to the pandemic, young interlocutors spoke enthusiastically of the informative, communicative, and entertaining functions of social media and smartphones. Different iterations of the phrase “I can’t imagine life without it” emphasized the necessity of both technologies in daily life. At times, they cultivated a corporeal connection with the device itself, expressing this as smartphones being “part of my body.” For example, Haru, a postgrad in her mid-twenties, once dropped her phone on the train tracks during her morning commute. A day without her phone impacted her daily rhythm; she was unable to entertain herself with videos during her lunch break and was unable to receive work communications. Since this “traumatic” experience, Haru now wears her phone on a strap around her neck wherever she goes.

Youths also had particular characterizations for popular social media platforms. For example, LINE, a popular messaging platform, was “the norm” in communicating and arranging general logistics of everyday life because it provided “quick” (subayai) chat and call functions. Instagram was identified as the most popular social media platform in Japan throughout my fieldwork, for its role in allowing people to stay in touch with friends by letting them view each other’s daily updates, and “follow” accounts of shared interests. Without Instagram, my interlocutors told me, it would be difficult to stay “on top” of trends or happenings in acquaintances’ lives. Despite their deft use of various platforms, young interlocutors emphasized that social media and smartphones are useful tools that should supplement in-person sociality, though never replace it. According to interlocutors, digitally mediated communication could cause miscommunication because facial expressions, bodily cues, and the general atmosphere of the conversation might be hard to read. In actuality, they often misinterpreted text messages, emoji, or “stamps” sent by acquaintances on LINE. This decentering of the digital contests the often hyper-technologized imaginations of Japanese society worldwide.

A photograph of an interlocutor’s smartphone, protected by a black cloth phone cover. The phone cover bears an image of a cat, followed with the caption: “Don’t touch my cell phone.”
Credit: Kimberly Hassel 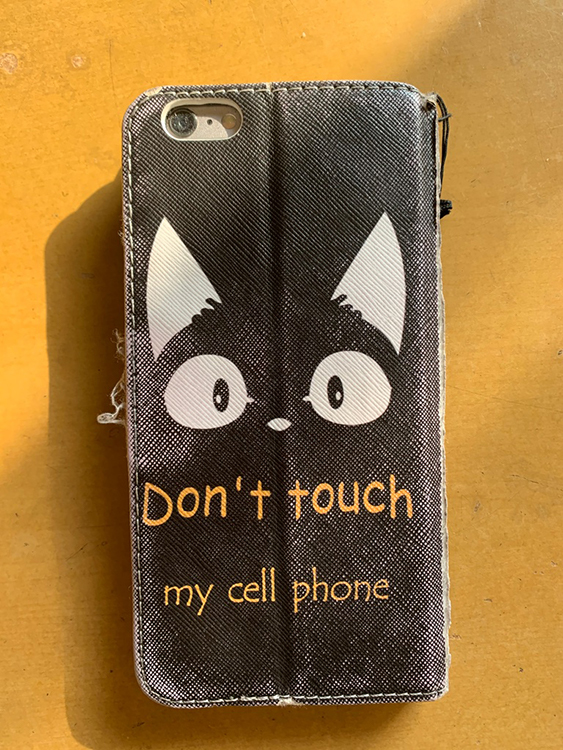 A photograph of an interlocutor’s smartphone personalized with an amusing cover.

As digital sociality became the form of everyday sociality amidst the COVID-19 outbreak, young interlocutors began to reconsider the presence of digital technologies in their lives as a taken-for-granted part of the everyday, completely integrated into the rhythms of daily life through work and personal communications (see Ling 2012 for a detailed discussion of this “taken for grantedness”). Interlocutors appreciated how social media such as Instagram and LINE became crucial avenues for ensuring the safety and health of their friends and family. For many, social media was also often the only way to feel “like a part of society” due to the inability to engage in activities outdoors or physically meet with others. This counters the pervasive pre-pandemic perceptions that social media is the culprit of “shallowing” relationships. Rather, the pandemic suggested a variety of possibilities as to how one can strategically recalibrate social/digital life. Young interlocutors relied on their friends’ own social media profiles to seek information during the early stages of the pandemic, fully aware of the caveats of misinformation and disinformation. Some refrained from uploading any photos or videos on their Instagram Stories that might reveal that they had been going outdoors, in fear of being judged by their friends and followers, including critical online users nicknamed “quarantine police” (jishuku keisatsu). In this case, the portable intimacy provided by smartphones and social media transformed into a site of hostile criticism and surveillance.

In the ensuing global health crisis, my fieldwork transitioned from an online and offline mixture of in-person interviews and participant observation to purely “remote” digital methodologies. Follow-up video interviews with interlocutors bore a more somber and fatigued air, yet were reflexive and intimate. I reflected deeply on what ethical implications there may be for digital methods when they have become the new “norm” in ethnography in the wake of the pandemic, in and beyond Japan. The digital poses opportunities for forms of intimacy and sociality as well as new challenges regarding boundaries. Video interviews often meant that I would be virtually “present” in interlocutors’ homes. I had to be mindful of those with whom my interviewees were living and what topics might be “risky” to speak about out loud.

This caveat became apparent during a video interview with Riko, a university student. In a previous interview, Riko spoke extensively of the role of social media in her life, particularly her use of a “secret” Instagram account as a diary. Riko’s sister perceives social media as “her private universe,” while her mother is a flip phone user and does not use social media at all. During our follow-up interview via video call, I began to ask Riko about her sister. “She’s right here!” Riko said aloud. I froze, not knowing that her sister had been there for the entire interview. Riko was not wearing headphones. Riko offered to relay any questions that I wished to ask her sister, to which I responded that I would at a later date. I then began to ask about her mother, but was quickly cut off by Riko. “Wait a second, wait a second!” Riko suddenly exclaimed, while frantically unwrapping a pair of headphones and plugging them into her iPad. I realized at that moment that I had committed a blunder. It was permissible to ask about Riko’s sister, but discussion of her mother was off-limits without headphones. Once Riko had her headphones on, she smiled and let me ask questions. After apologizing profusely for the mishap, I asked if her mother had purchased a smartphone. Leaning into the camera, Riko then whispered: “She bought one!” We laughed in unison.

The author, a woman with a voluminous afro, is facing the camera in mid-laughter. She is wearing a blue headband and hoop earrings. She is holding her field notebook. A bed, a hanging plant, and three stuffed animals are visible in the background.
Credit: Kimberly Hassel

A photo of the author during the moment of shared laughter within Riko’s video interview.

The digital is sometimes begrudgingly framed by ethnographers as a lackluster alternative to “on-the-ground” fieldwork. This is similar to interlocutors’ pre-pandemic characterizations of digital sociality as lacking. Rather than focusing on what is lost by the digital, perhaps we can reflect on what is gained, and experiment with its potential to create new ethnographic socialities. I felt closer to my interlocutors as a result of our video check-ins throughout the pandemic. While some of our digital interactions involved formal interviews, it also involved more creative interactions: for example, jointly participating in an online yoga session. The intimacy that was afforded by video check-ins and virtual presence means that we, as ethnographers, may have to reassess the boundaries of our relationships. This can involve navigating our positionality as both friend and ethnographer, which are not mutually exclusive—as Fiona Murphy points out in her discussion of friendship and fieldwork—but still have ethical implications.

I feel deeply indebted to my interlocutors for their patience and for keeping me company throughout the pandemic. Our screens ultimately facilitated intimate moments of empathy and compassion during the solitude of the times.

“Notes from the Great Quarantine: Reflections on Ethnography after COVID-19,” by Tom Boellstorff

“Doing Fieldwork in a Pandemic,” crowdsourced document initiated and edited by Deborah Lupton

Kimberly Hassel is a PhD candidate and digital anthropologist within the Department of East Asian Studies at Princeton University. Her dissertation, funded by a Japan Foundation Doctoral Fellowship, examines Social Networking Services (SNS), smartphone ownership, and the (re)configuration of notions of sociality and the self among youths in Japan.