How do we define racism? Would we include ourselves in this definition? Until recently, I would have included myself tangentially by acknowledging that I have white privilege. I may have silently admitted that I sometimes did or thought something racist, but I would distance myself from actually being racist in comparison to other people. Last June, I had to seriously reconsider my own racism and, for the first time, I put myself fully in the definition of racism. I had let myself believe that antiracism could be primarily about knowing racism exists instead of actively working against it, and I realized that I was not practicing my values of justice, truth, or love. Self-reflective antiracist education has shown me that I can live out these values.

Antiracist education rooted in self-examination demonstrates a growing desire for change, and this education captured my attention last summer. There is a rich history of calls for self-examination from activists and scholars, both within and outside of anthropology (Ulysee 2019). This tradition of reflexivity was a part of my anthropological training: I had reflected on my social positions mainly within my research and work relationships, but less so in my daily life or on my positions with privilege. My interaction with activism on social media gave me the tools to actively reflect my own part in oppression and engage in antiracist practice. Follow activist Rachel Cargle’s #DoTheWork challenge, and you will receive 30 tasks designed for personal reflection and action. Visit Leesa Renee Hall’s work, where you can find expressive writing prompts to unpack your unconscious bias. Their work—and other antiracist educators and thinkers—have guided me to consider honestly and specifically my own part in oppressive systems like white supremacy.

Much to my discomfort, many people speaking on antiracism deliberately use the term white supremacy instead of racism. Before encountering this work, I defined racism as the oppression of Black people, Indigenous people, and/or People of Color (i.e., BIPOC) happening on all societal levels, from daily personal interactions—like being silent when someone makes a racist joke to institutional-level policy and structures, like the redlining of Black communities—that result in material, emotional, mental, and spiritual oppression of BIPOC. To me, white supremacy was the feeling of white superiority and hatred of BIPOC that conjures images of Nazis and the KKK. 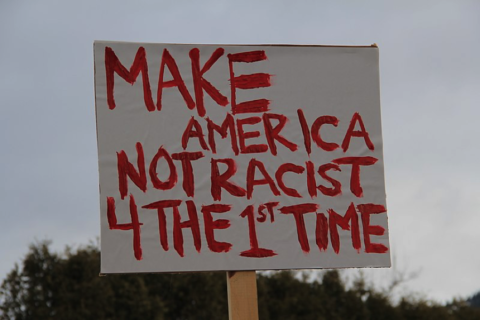 Antiracist educators challenge us to ask, What is the difference between inaction around racist jokes, redlining, and white nationalism? All of those things cause harm to BIPOC. By collapsing the distinctions created in categorizing racism as separate from white supremacy, we see that these are differences in degree rather than in category. The “Pyramid of White Supremacy” graphic adapted by the Equality Institute shows how these behaviors, beliefs, and institutions are interconnected and co-constituting. Genocide and violence are often separated out as the real examples of white supremacy; however, this violence comes to fruition in climates of indifferent and apolitical stances (e.g., “I don’t see color”), minimization of the harm caused by racism (e.g., “Slavery was so long ago”), and veiled racism in the form of racist jokes. So what happens, for example, when we do not challenge a racist joke? Our silence enables the continued dehumanization of the targeted racial group, and this dehumanization is the foundation of white supremacy and the mechanism through which various forms of discrimination and violence manifest.

Using the term white supremacy also makes white people liable for the consequences of racism. White people’s “racial issues” too often go unrecognized. If an unarmed Black man has been killed by a white police officer, mainstream media does not condemn the beliefs or behaviors of the officer but focuses on how the victim’s Blackness is to blame (Moody-Ramirez and Cole 2018). Similarly, US media does not refer to violent acts such as the attacks at the synagogue in Pittsburgh, PA, or the mosques in Christchurch, New Zealand, as white supremacist terrorism (Elmasry 2019). These examples demonstrate racial problems rest with white people and their oppression of BIPOC: white supremacy is a more apt term than racism in describing the root causes of racial problems.

White supremacy exists in our beliefs, behaviors, and relationships, all of which we can examine through self-reflective antiracist work. For white people who consider themselves to be allies to BIPOC, self-reflection highlights how we are not separate from our racist culture, but how we have been impacted by it (Goldberg 2002). Moreover, I have seen how white people, including myself, minimize and deny the harm we do to BIPOC. We cite examples of why we cannot be racist (our enlightened knowledge about race and racism; having loved ones who are BIPOC; our personal experiences with oppression; working for and donating to good causes). We claim that our intentions were misunderstood, and we prioritize our feelings over harm done, a set of behavioral patterns that Robin DiAngelo calls white fragility (Waldman 2018). These defensive reactions serve to maintain rather than disrupt the status quo of white supremacy-as-usual.

As I began critical self-reflection, I found my that understanding of white supremacy’s effect on me—and thus on BIPOC—sorely lacking. I also found that I lacked in tangible, consistent antiracist action. This recognition has been a source of a lot of shame. I have wondered how I can face my complicity in oppression when I had for so long believed myself exempt. My values—love for people, justice, and truth—brought me to this point of acknowledgement and accountability, and that love especially can help me continue this reflection, and advocate for racial justice. While this love is not easy, it is liberating. I feel like an active participant in and of my values. Anthropology has nurtured my love for people and brought my attention to unjust power dynamics. Self-reflective antiracist work has provided me with avenues to act on that love and redistribute power equitably.

Although white people are part of maintaining and creating oppression, we can also actively become part of dismantling oppression. Many activists call this being an accomplice rather than an ally (Clemens 2017). Antiracist, anti-oppression work differs for everyone, but I believe two basic steps are necessary: self-reflection and action. For me, action has included

I am doing this messily and anxiously, but I am making antiracist actions like these a way of life.

While my focus has been on white supremacy, I am convinced that reflection on personal complicity in oppressive systems overall—emphasizing but not limited to white supremacy—can develop urgent, active accountability. I believe the core values of anthropology align with antiracist and anti-oppression work, and anthropologists can participate in this growing movement. I believe we can bring about the world we want to live in. For me, that world has true racial justice, and my part in creating that world is only just beginning.

Special thanks to Luzilda Carrillo Arciniega for her editorial expertise in developing this article. Thanks also to Hanne van der Iest for her help in final clarifications.

Brianna Farber is a cultural and environmental anthropologist who works at the intersections of agriculture, natural resource conservation, and science studies. She recently finished a postdoctoral teaching fellowship at the University of South Carolina. You can find her on Instagram at @bri.farber or through her website, http://bdfarber.net.

Luzilda Carrillo Arciniega and Chandra Middleton are contributing editors for the Association for Political and Legal Anthropology.