A student-curated exhibition offers an immersive exploration of food and the connections, stories, and memories we consume each time we eat.

Embodied Taste opened in December 2019 at the Mead Art Museum on the campus of Amherst College. The first collaborative student-curated exhibition to be installed at the Mead, Embodied Taste was the culmination of an upper division anthropology course that centered student voices, project-based learning, and public scholarship. The exhibit invites visitors to enter a diverse, multisensory space that decenters privileged narratives as it explores the ways food moves through our bodies and our worlds. Following positive reviews, its run was extended and the exhibit selected as a pilot virtual exhibition, which is currently on view.

All of the objects displayed in the exhibit had to come from the collections of the Mead Art Museum or the special archives at the college. Unlike other exhibitions, we did not have the funding or the time to request outside loans. In preparation, we sorted the collection according to a variety of themes all related to the category of food to ensure the course readings and syllabus made sense. Emily did a pre-sort of the collections, finding about 100 objects that might be used. These were broken down into smaller groupings, paired with complementary readings, and reviewed by student curators during the first four weeks of the course.

A small, neon yellow sign with the word, “Eat” hangs over the entrance to a white and red-walled museum gallery. Hung on the left-hand wall is a large oil painting of a feast; on the main wall straight ahead a smaller painting of two Black women sitting at a table and drinking from cups with straws, three black and white photographs, and a set of headphones. “Embodied Taste” is printed in large red letters on the main wall.
Credit: Tim Gillfilan 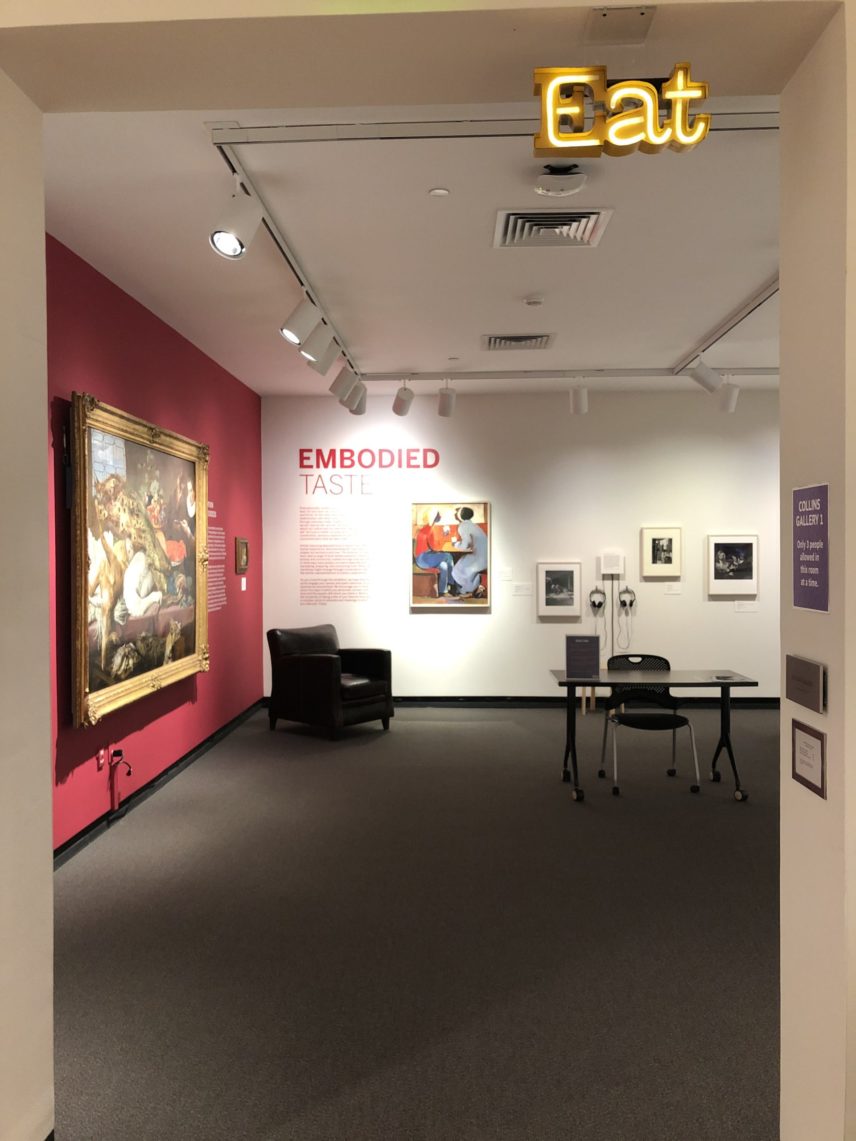 After the students had selected their overarching concept and narrowed the objects to be displayed, we shared some startling statistics. Of their draft list that contained 33 works, most were created by white, non-Hispanic male artists, with only two Haitian artists, one African American artist, and four women artists included. As a class we discussed the implications of their choices and how to address them. Students changed some of the artwork, adding previously overlooked works by contemporary African American artist Lorna Simpson, among others. They decided to find more global food stories, curating a video loop to emphasize women and labor in the kitchen. And, they felt strongly that the most prominent piece of artwork in the exhibition should not be Frans Snyder’s Larder with Servant, as had been suggested by a guest speaker, but Serge Hollerbach’s Two Girls with Soft Drinks. With these adjustments, they hoped to avoid reinforcing a dominant white masculine Eurocentrism already present in the Mead’s collections and in museums more generally.

Six college students are seated in a grey, windowless room. All wear black eye-masks and lean over a long table with small plates of food and drinks in front of them. They taste the food, using a spoon, fork, knife, their hands, or chopsticks. Some students have turned to talk to the person next to them. Some of them are smiling. Others appear to be concentrated on tasting.
Credit: Emily Potter-Ndiaye 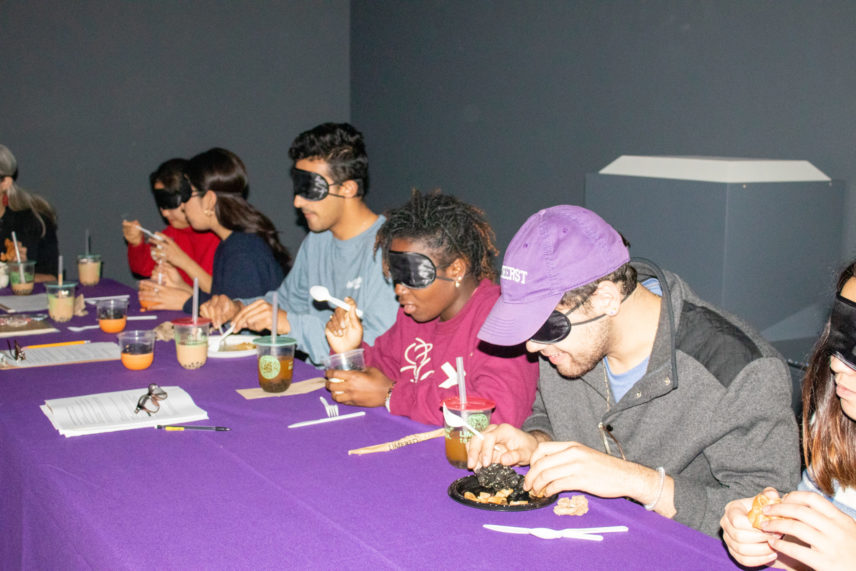 Students “dine in the dark” to explore connections between food and the senses in the gallery space (pre-design).
A photograph shows the backs of two young women, one White, wearing a backpack, the other Black, carrying a tote bag with a college logo partially obscured. They both look intently at a transparent temporary wall that stands in a high-ceilinged industrial building. Displayed in the wall are at least 60 colorful menus, documenting Chinese restaurant menus in the United States.
Credit: Amy Cox Hall 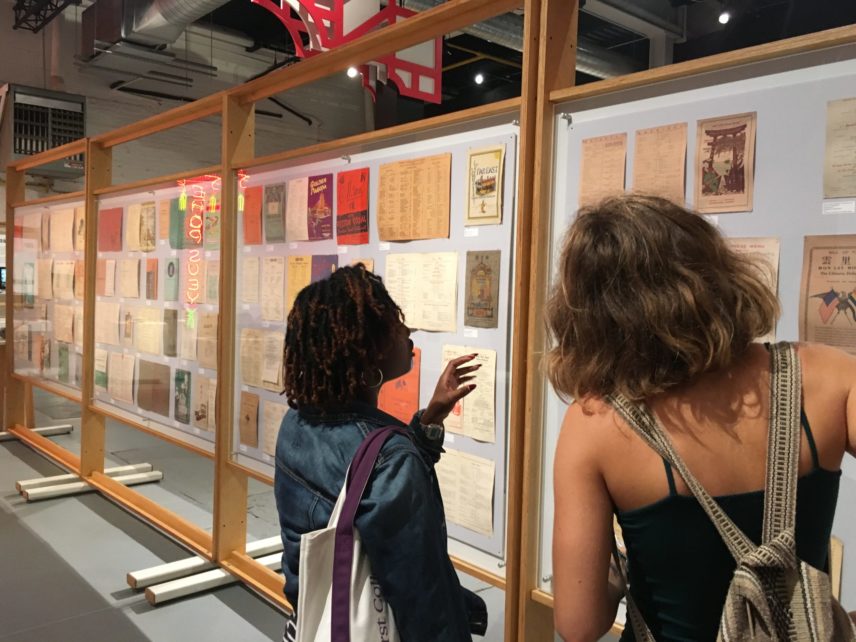 Students take note of the exhibition design strategies for displaying menus at The Museum of Food and Drink in Brooklyn, New York.

Many students felt that museum exhibitions were unwelcoming and elitist and wanted to create something that would be appealing to a wider audience and to themselves. We began the course reading Susan Sontag’s Against Interpretation and Stephen Greenblatt’s Resonance and Wonder. Inspired by these and other readings on exhibition design and critical food theory, students decided to create a space that was multimodal, sensorial, and welcoming. In the first room of the gallery, two students recorded audio of people eating together and alone, which were shared at two listening stations. The audio recordings also included food-related poetry by graduating senior Sommer Hayes and feminist author Minnie Bruce Pratt. In the second room, the group made an interactive recipe and memory station. At a simple table, designed to evoke a dining counter, visitors viewed recipes left by others and shared their own. There was also a “smelling station” comprising locally sourced food aromas. The paint colors, Benjamin Moore “white flour” and “cherries jubilee,” were intentionally chosen to support the mood and thematic of the exhibit. A purchased neon sign that read “Eat!” was playfully hung at the gallery’s entrance as a way to add humorous vibrancy and enliven what are often somber art museum spaces.

A photograph of a long white counter bracketed to a deep red wall, with a round, pale wood stool tucked underneath it. There is a white museum-style label with indiscernible text written on it affixed to the wall to the right of the counter. A slim, horizontal aluminum bracket is mounted to the wall a few feet above the counter, holding two slips of paper, reminiscent of a ticket holder from a deli. Below it and to the right, much closer to the counter, are six spice jars in a wall-mounted rack. Sharpened pencils sit in two glass jars on the left hand side of the counter, leaving an empty space at which a person could come, sit at the stool, and write or work at the counter.
Credit: Emily Potter-Ndiaye 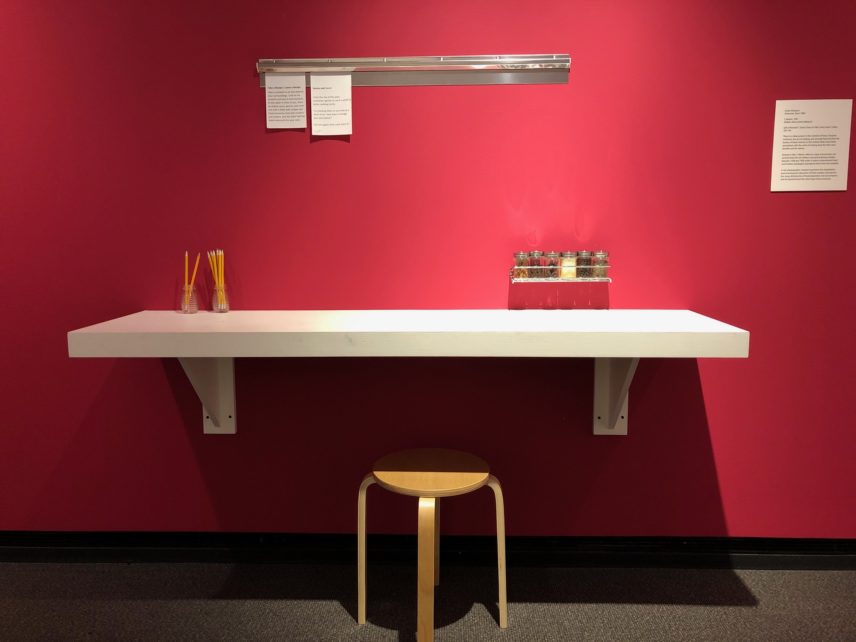 Interactive recipe and memory table with food fragrance station.
A photographic detail of a museum exhibition section that shows two glass vitrines, a wall label with very small text, and an excerpt from an Emily Dickinson poem, printed in red letters on a white wall. The poem reads, “Fame is a fickle food/Upon a shifting plate/Whose table once a/Guest but not/The second time is set.” The vitrine to its right side contains a sculpted plate in pinks and whites with a narrow, almond shaped center, and lace-like ripples surrounding it, with tiny handwriting at the top and bottom. The vitrine to the lower left contains three aged booklets with hand stitching and tassel. Two of them have been opened to reveal a page containing a menu. The third shows a fancy embossed cover.
Credit: Emily Potter-Ndiaye 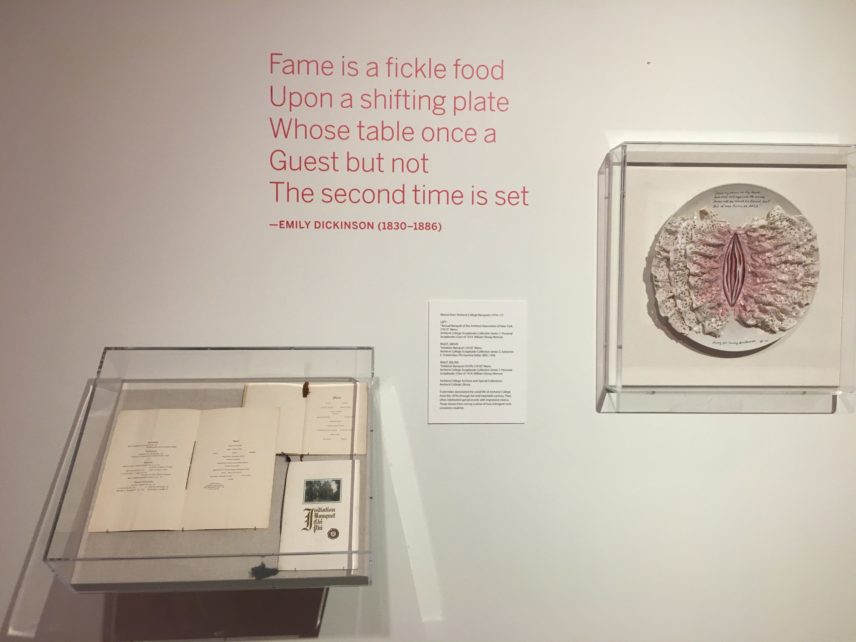 Detail of menus from Amherst College banquets (1910–17) and Emily Dickinson Plate (Study) by Judy Chicago for The Dinner Party.
A Black man and a little girl sit on low stools in a corner of a white-walled museum gallery. They are each wearing a pair of headphones that connect to a hidden device, covered by a white text panel with words that are too small to make out. In addition to that panel, there are framed photographs, one of a couple at a round table covered in food. Another photograph, as well as a gold-framed painting is obscured. The man and his daughter sit knee to knee, apparently listening, but have turned to smile briefly for the picture.
Credit: Emily Potter-Ndiaye 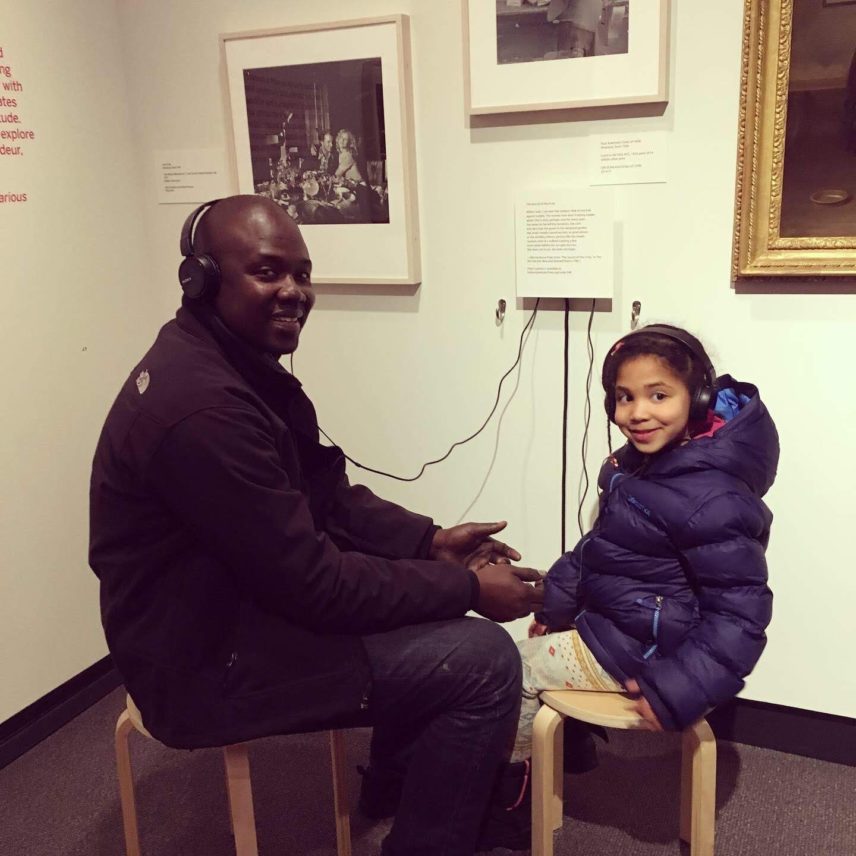 The course was challenging. There was not nearly enough time. But the excitement of sharing something publically was incredibly motivating. Without question, the exhibit was successful because of the students’ commitment to one another and to a respectful exploration of our collective imaginings, desires, and talents. The exhibit opened on the last day of class. Families and friends joined us to celebrate. Since then, several students have graduated and the pandemic has complicated museum visits. Still, their work continues to impact the community: The space has been used for K–12 and college class visits, dance improvisation, and research by Folger Institute Collection Fellows. Most recently, it seeded a partnership with Amherst Regional Public Schools for their fourth grade curriculum, connecting family recipes, farms, oral history, and portraiture.

Amy Cox Hall is the author of Framing a Lost City: Science, Photography and the Making of Machu Picchu (2017; Spanish translation 2020) and editor of the forthcoming volume The Camera as Actor: Photography and the Embodiment of Technology (2020). She is currently writing her second monograph, The Taste of Nostalgia: Women, Food and National Longing in Peru.

Emily Potter-Ndiaye is the Dwight and Kirsten Poler & Andrew W. Mellon Head of Education and Curator of Academic Programs at the Mead Art Museum, Amherst College. Her programmatic focus is on shared authority practice in museums and bridging the divide between emerging scholarship and public humanities experiences through curricula, student leadership opportunities, and student-generated scholarship.