*This essay includes a photograph of a replica Paranthropus boisei skull and a modern human skull.

New approaches to the dental remains of early hominins and the diets of living primates are changing our understanding of what our ancestors ate and why.

Shortly after Mary and Louis Leakey unearthed the first hominin skull found in East Africa, they brought it to Leopoldville (now Kinshasa) for the Pan-African Congress on Prehistory. It was August 1959. The cranium had a thick, heavily buttressed upper jaw and face, a large, bony crest to attach massive chewing muscles, and huge, flat cheek teeth. Phillip Tobias, a young paleoanthropologist from South Africa, was there and on seeing it said, “I have never seen a more remarkable set of nutcrackers” (quoted in Meredith 2011). “Nutcracker man,” as Paranthropus boisei became known, must have had a powerful jaw. It certainly had the biggest, flattest teeth of any hominin known at the time. The story took shape over the years that followed: as grasslands began to overtake primeval forests in Eastern Africa, surely hard, dry foods like acacia seeds and tubers would have replaced fleshy fruits in the diet.

The idea of the “nutcracker man” as a species with highly specialized anatomy evolved to crush hard, dry foods on the open savanna can still be found in anthropology textbooks today. But new methods and theories are beginning to challenge this traditional view. We’ve developed new tools to wring details from the dental remains of our ancestors, and new interpretations have followed from new understandings of relationships between teeth, diet, and environment in living primates.

A photograph showing the torso of a gorilla chewing a branch that it holds up to its mouth in both fists.
Credit: Peter S. Ungar 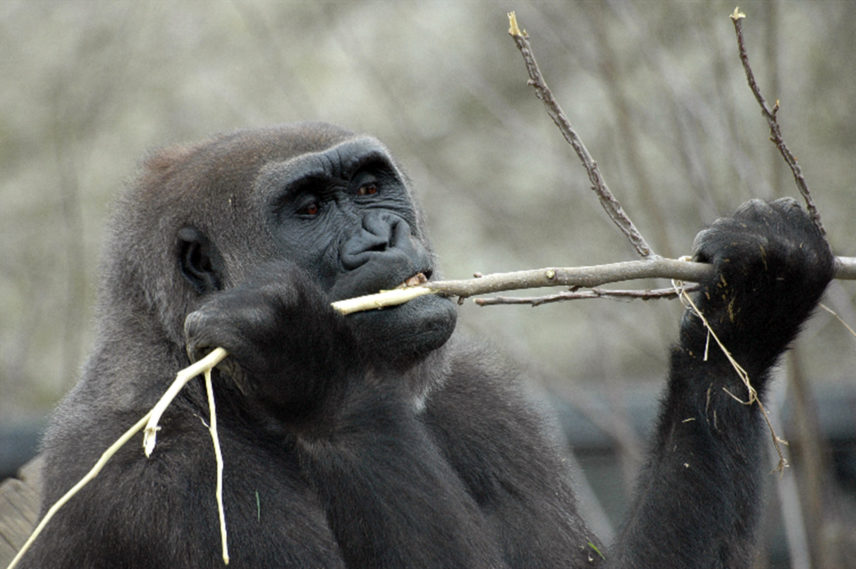 Trudy, a gorilla at the Little Rock Zoo, chews on a tree branch.

The seeds of today’s hominin dietary hypotheses were sown in South Africa in the early 1960s. Three genera of Plio-Pleistocene hominins were recognized at the time, Australopithecus, Paranthropus, and Homo. South African paleoanthropologist John Robinson (1963), noted that compared with Australopithecus, Paranthropus evinced bigger, flatter teeth and thicker enamel whereas Homo had the opposite—smaller, more crested molars. He reasoned, based on these differences, that Australopithecus likely had a fairly broad, omnivorous diet, while in contrast, Paranthropus was a dedicated vegetarian with big, flat teeth for grinding and crushing savanna plants. Homo, Robinson argued, would have eaten more meat as our ancestors took over the spreading grasslands.

Once the order of appearance of these hominins was worked out and more fossils were discovered, the view emerged of an evolutionary fork in the road. Australopithecus came first. Our Paranthropus “nutcracker” cousins and early Homo ancestors followed. Paranthropus had bigger, flatter, thicker teeth, and more robust, powerful jaws and chewing muscles to crush hard, dry foods in the open settings. The teeth and jaws of our early Homo ancestors were smaller but their brains were larger, and tool use became increasingly important as they began to include more meat in their diet. It’s a compelling story that fit well both with cut-marked bones found at early archaeological sites, and with the “Man the Hunter” model for human evolution that had become deeply entrenched in the collective psyche of anthropologists at the time.

But subsequent attention to dental ecology, which relates diet to teeth in living primates suggests that jaw and tooth size and shape alone may not give us the detail needed to tell the tale. This marks a fundamental and profound shift in focus from how teeth work (e.g., flat ones are for crushing, sharp ones are for slicing) to how they are actually used. Tooth form can teach us something about what a species is capable of eating, perhaps even what it evolved to eat; but this need not be what individuals preferred or ate on a daily basis. We need a more complete view to understand the role of diet in human evolution, particularly if our goal is to understand that role in light of environmental change and resource fluctuation. We can find examples today in studies of mangabey monkeys and gorillas.

Mangabeys have served as a model for hominins given their flat teeth with thick enamel and heavy jaws well suited for crushing hard foods. Indeed, sooty mangabeys in the Taï National Park, Côte d’Ivoire, specialize in eating Sacoglottis nuts, which are about the size and shape of a walnut. These are rot-resistant and can be found littering the forest floor year round (McGraw et al., 2014). Other monkeys at Taï don’t usually eat them for lack of the necessary masticatory apparatus. In this way, the teeth and jaws of sooty mangabeys give them an advantage in access to food. Grey-cheeked mangabeys at Kibale National Park in Uganda prefer and eat soft, fleshy fruits and young leaves most of the time—like the guenon monkeys that live alongside them. It is only at times of extreme resource stress when fleshy fruits are unavailable that Kibale mangabeys “fall back” on bark and hard nuts (Lambert et al. 2004). Again, though, their teeth and jaws give the mangabeys an edge. These mangabey species have similar dental adaptations, but different diets. 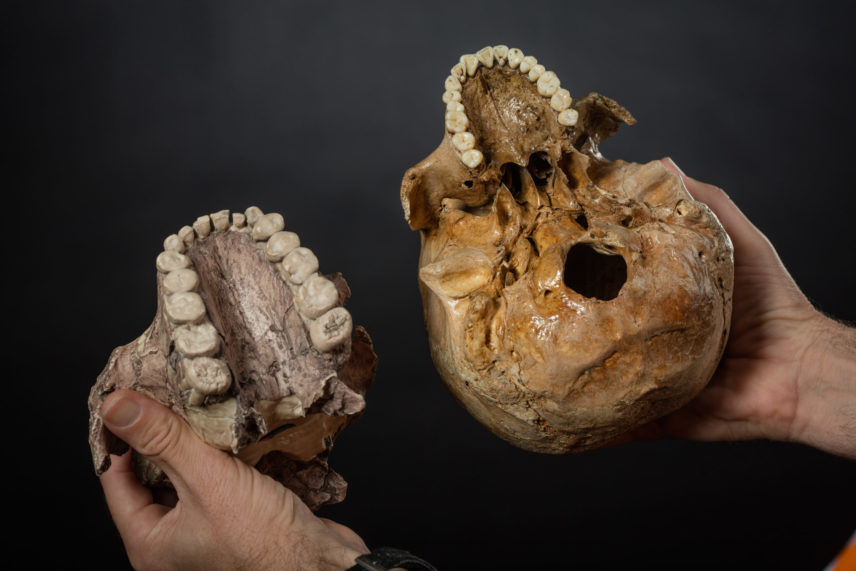 The upper jaw of a replica of the “nutcracker man” skull, Paranthropus boisei (left) with huge, flat teeth, compared with that of a modern human (right).

Gorillas offer another example. They have sharp, crested molars and massive chewing muscles with deep jaws, seemingly evolved for heavy mastication of tough, fibrous plant parts. And indeed, the diets of mountain gorillas in the Virungas of East Africa are dominated by terrestrial herbaceous vegetation: the stems, leaves, and pith of nonwoody plants. In contrast, lowland gorillas consume more soft, fleshy fruit. They only eat tough, fibrous foods when favored fruits are unavailable. In fact, when presented with an option, lowland gorillas in zoos choose mango and cantaloupe over cabbage and celery (Remis 2002). Why the difference between gorillas? There are more fruit to eat at lower elevations. Again, we have similar species with similar dental adaptations but different diets, in this case because of differing food availabilities.

If two species can have similar teeth but different diets, how can we use dental remains to reconstruct feeding behaviors of fossil hominins? While tooth form provides insights into potential diets for a species, we also need a record of what individual animals ate at moments in time in the past. We need “foodprints”: telltale traces of actual behavior such as dental microwear and stable isotopes.

Dental microwear analysis is the study of scratches and pits in teeth that form during feeding. We can use microwear patterns on molars to infer diet because different foods require different chewing actions. The basic idea is that hard nuts (or bones) crushed between opposing surfaces should cause pitting, whereas tough leaves (or animal soft tissues) sheared between crests that slide past one another (think about scissor blades) should result in parallel scratches. In microwear texture analysis parlance, hard and brittle foods cause complex but isotropic microwear surface textures. Softer but tougher items cause simple but anisotropic ones. So while the teeth of mangabeys from Taï and Kibale both have flat molars with thick enamel and powerful jaws, the former have higher microwear texture complexity averages because of regular Sacoglottis nut consumption (see Ungar 2018). While tooth shape tells us little about diet differences between these mangabeys, microwear seems to pick them up clearly.

Two greyscale images. The upper image is covered in fine diagonal scratches at various angles. The lower image contains some scratches but is dominated by pits.
Credit: Peter S. Ungar. 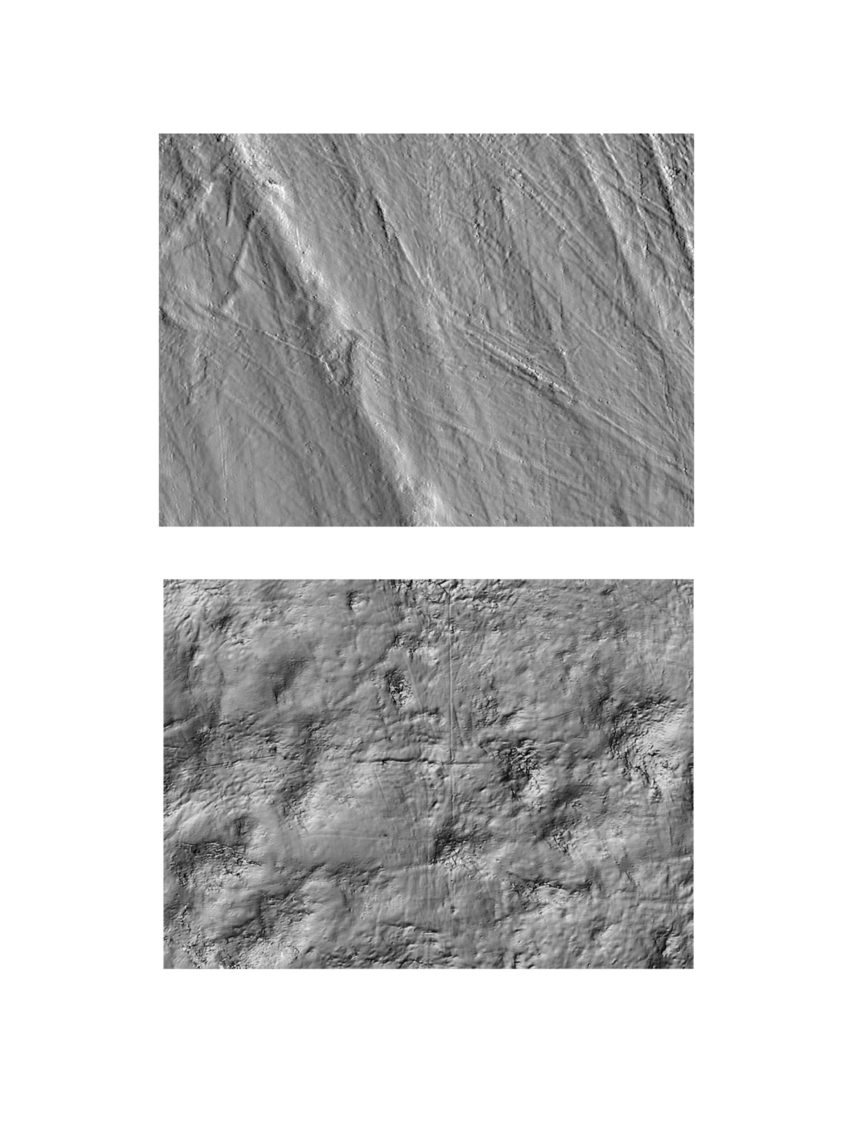 Dental microwear on a Paranthropus boisei tooth (above) compared with a P. robustus tooth (below). The P. boisei image is dominated by fine scratches, whereas the P. robustus surface is covered in pits. These surfaces each represent an area 0.204 x 0.276 mm on the original tooth’s surface.

Paleoanthropologists have applied this approach to the molar teeth of several early hominin species. Paranthropus robustus from South Africa has a broad range of microwear complexity values, suggesting that some individuals consumed hard foods in the days or weeks before death whereas others did not. The Paranthropus boisei sample from Eastern Africa has uniformly simple microwear textures consistent with softer, perhaps tougher foods. These microwear differences are surprising given similarities between the two presumed “nutcracker” species in tooth and jaw form. But the differences between these hominins can be understood in light of another foodprint. Carbon stable isotope analyses of Paranthropus teeth indicate that the P. boisei diet was dominated by tropical grasses or sedges, or both, and that P. robustus ate more tree and bush plant parts (Sponheimer et al. 2013). Microwear and isotope foodprints align to suggest that diets of the two Paranthropus species differed despite similar occlusal morphology, much like mangabeys today.

Microwear texture patterning in other fossil species gives further insight into hominin dietary evolution. Australopithecus afarensis and A. africanus have simpler microwear surface textures, whereas Homo habilis has a broader range of texture complexity values. Homo erectus and H. neanderthalensis have even more dispersion in texture complexity (El Zaatari and Ungar 2017). This is seemingly consistent with a broadening of the diet from Australopithecus to early Homo to later Homo species—something that would be difficult to pick up from tooth form alone.

So what are the lessons learned from combining dental ecology with early hominin microwear? How does our story of the evolution of hominin diet change? First, the Paranthropus example gives us an important cautionary tale. It teaches us that tooth size, shape, and structure may reflect what a fossil species was capable of eating, but that may not be enough if we want to understand food choice. Perhaps the differences in diet between species in Eastern and South Africa result from differing food availabilities—like we see with gorillas. Microwear leads us to new hypotheses and new research directions.

Microwear of Australopithecus and early Homo might help us contextualize models of human evolution tied to climate change as a principal driver. Consider the savanna hypothesis. A broadening diet, at least as far as microwear texture attributes can be interpreted, might be consistent with changing food availabilities associated with the spread of grasslands. The appearance of an archaeological record with stone tools increasing access to a broad variety of foods and cut-marked bones is certainly consistent with a shift from a more ape-like diet dominated by forest or woodland plants toward more human-like hunting and gathering of savanna resources.

The microwear data also fit another popular model though. Rick Potts of the Smithsonian Institution has proposed that human evolution was driven in part by variability selection (Potts and Faith 2015). We can associate two overarching and superimposed patterns with climate change over the course of human evolution. Paleoclimatologists note a general trend toward cooling and drying conditions over time; but the amplitude of oscillations between warm-wet and cool-dry conditions has also increased. Potts and colleagues suggest that our ancestors evolved for behavioral versatility given uncertain, fluctuating environmental conditions. Assuming that ever changing habitats meant ever changing foods to choose from, we might expect our ancestors to have developed broader diets over time in response. And the microwear evidence is certainly more consistent with a broadening of the diet than a simple shift from plants to meat.

Interpreting foodprints through the lens of dental ecology opens new possibilities to frame early hominin diets in terms of climate change over the course of evolution. We begin to consider a broadening menu driven by increasing flexibility rather than a simple shift to meat or savanna plants as grassland overtook forest. Perhaps this brings a new perspective to the spread of later hominins across the globe, facilitated by the ability to find something to eat wherever they roamed.

Peter S. Ungar is distinguished professor of anthropology and director of environmental dynamics at the University of Arkansas. His research focuses on teeth, feeding ecology in living primates, and hominin diets, as laid out in Evolution’s Bite: A Story of Teeth, Diet, and Human Origins (2017).