Fighting America, One iPhone at a Time

Boycotts, illusions and the making of the new Turkey

Find it absurd. Find it irrational. But while those infuriated with Nike in the United States were busy cutting out the swooshes from their Nike apparel and setting them on fire, some in Turkey have been smashing iPhones to protest US President Donald Trump, and calling for a new world order. 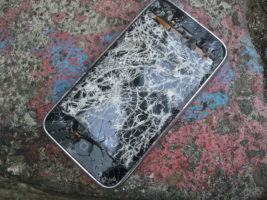 But why smash a thousand-dollar gadget, one which a minimum wage employee in Turkey cannot buy even after saving three months’ salary? And why do it despite knowing that boycotts in Turkey have always been, at best, short-lived? What is at stake in engaging in this performance?

The following scene took place after the Turkish President Erdoğan had asked for a boycott of American electronics.

Six youth, some in their early teens, stand in front of a Turkish flag. They each make hand gestures, some in the shape of wolves, a sign of their commitment to Turkey’s far right party, the Nationalist Action Party. Others raise four fingers in the air, making the Rabia sign, a common greeting that Erdoğan uses to show solidarity with the Muslim world. A seventh man holds a sledgehammer. He demands iPhones from others, and waving the iPhones before the camera, he lambasts Trump: “This is the iPhone you’ve produced. Look at what will happen to it. See how one conducts a coup.” The coup he refers to is none other than the failed coup of July 2016. He places the iPhones in a row, and smashes them with a sledgehammer, staging a literal coup, or blow.

And then, as he slowly walks towards the camera, all proud, we hear a phone ringing in the background. An iPhone in fact, and possibly the same one used to capture this footage. Does he care? Not in the least…

Burning neckties, shirts, and fridges… and stabbing oranges, among other things…

I remember, as a 14-year-old in 1998, how infuriated people were when the Italian state refused to extradite the Kurdish guerilla leader, Abdullah Öcalan. There were no Italian phones to smash back then, but refrigerators produced by the Italian Ariston company (which now goes by the name Indesit), as well as shirts and neckties imported from Italy did the trick. Most were burned on pyres set up in the streets. Pirelli tires had to advertise in major newspapers to tell the angry crowds that the tires produced were tires made in Turkey. Companies with Italian-sounding names had to inform the public that they were indeed Turkish companies.

A few weeks after the protests, Öcalan was captured in Kenya. The crowds in Turkey were ecstatic—and the Italian boycott long forgotten.

One could speak of similar episodes where Turks were equally ecstatic in front of cameras, pouring Coca Cola down the drains to boycott Israel, or stabbing Dutch oranges. Only a few years after Coke was associated with Zionism, the very Turkish President—none other than Erdoğan—whom the angry masses eagerly followed in their boycott of Coke, was live on television, opening a new Coca Cola factory in the Turkish city of Isparta.

You can guess how the story continues… The masses that continued eating Italian pasta sauce after Öcalan’s capture, and drinking Coke now made in Isparta continued to use iPhones too, shortly after smashing them. A few days after the call for boycott, some members of parliament were caught on camera using iPhones. And fast forward a few days, the very leitmotif for the boycott, Pastor Brunson, who was in house arrest for espionage in Turkey, was released, put in a private jet sent by Trump, and within a matter of hours, he was blessing the US president.

Did Erdoğan supporters feel betrayed? Like their counterparts in 1999 (Italy), 2014 (Israel), or 2017 (Netherlands), no, they did not. What mattered to them had little to do with these logical fallacies. For they were not merely responding to a call by the Turkish president to boycott American electronics, but participating in the making of a new world order where Turkey was no longer a neglected force. To them, it was this illusion that mattered. To critics, this was a delusion at best.

The power of the illusion

I have witnessed people carried away by the same force during my fieldwork in Strasbourg working with a conservative and nationalist diaspora population since 2013: People camping in the mountains on Vosges and chanting nationalist hymns into the thin air; making Grey-wolf hand signs in iconic plazas and in front of statues of French army generals and posting them on Facebook; demanding European leaders to be democratic while their leader was nowhere near democratic himself; and asking for European journalists to be more objective in their stories on Turkey while many Turkish journalists were in jail or in exile to evade the AKP purge.

To an outsider, this probably doesn’t make sense. But the illusion (delusion if you remain cynical of the logical fallacies behind the performances) is compelling enough to follow. For under the now-nearing-20 years of AKP rule, the once muted conservative, anti-secularist, ultra-nationalist crowds of the Turkish Republic and the diaspora finds a new way to feel proud of their existence. Their voice resonates with the voices of those occupying the highest authorities in Turkey. The very people who adopted the boycott and smashing of iPhones are assured that people like them rule Turkey and represent it in the international arena. This creates a sense of collective power, one that gives individual lives purpose. In his article, “Hating Israel in the Field,” Ghassan Hage explores how political emotions help to empower individuals by giving them a purpose, an activity, or an ideal—one where the self is reimagined through the collective thinking of “we.” In this case, the Turkish president skillfully constructs this collective “we” through his speeches, and sustains it through his angry outbursts: a collective “we,” a greater Turkey, or a new Turkey—a proud and arrogant one that no longer submits to the whims of other countries, but stands up to them like the masses do today. This is a president who does not shy from shouting at world leaders in global summits and calling them names, like the masses do in their homes, and in coffeehouses, and mosque courtyards. Erdoğan embodies the ways they think politics should work: not through diplomacy, or dialogue—both are tools the powerful use to make others submit—but through violent outcries. Hence the oft-repeated Erdoğan phrase propagating new world order, “Dünya Beşten Büyüktür,” the world is bigger than the permanent members of the United Nations Security Council. The angry masses of Turkey take this discourse to heart, and enact it in whatever way they can.

Call it absurd. Call it irrational. But for those who follow Erdoğan’s lead, smashing iPhones is the newest episode in making life meaningful and escaping its hardships through chasing an illusion of grandeur, one that instills in the masses the idea that they are part of a new Turkey in the making. An illusion well put in place for many years now by the master magician, Recep Tayyip Erdoğan.

Oguz Alyanak is a PhD candidate in sociocultural anthropology and a McDonnell scholar at Washington University in St. Louis. His fieldwork in Strasbourg, funded by the Wenner-Gren Foundation, was on moral anxieties pertaining to Muslim Turkish men’s going out habits.