“Finding Vessels for Our Lights”

Society for the Anthropology of Religion

Ori Mautner, recently graduated from Cambridge University, was awarded the Society for the Anthropology of Religion’s 2020 Graduate Student Paper Prize for his essay “‘Finding Vessels for Our Lights’: Buddhist-Derived Meditation as an Ethical Means for Jewish Encounters with the Divine.” The paper is a reflection on the role that embodiment plays in ethical formation, and he chose a fascinating set of people to think this through: observant orthodox Israeli Jews who also take part in Buddhist-derived meditation practices. Mautner and I recently spoke about how meditating Haredi and other orthodox Jews became his fieldwork focus, the promise and danger of meditation for them, and what carrying out this fieldwork was like.

Jon Bialecki: I want to start this interview by asking how you came to this project. It’s a fascinating problem, not just in the fact that, at least to me, this was an unexpected ethnographic phenomenon, but also in the questions it poses about ethics, religion, and embodiment. So how did you end up researching Orthodox Jewish vipassanā meditators in Israel?

Ori Mautner: I was about to begin my anthropology MA course at Tel Aviv University, and wanted to write my thesis on meditation, which is something in which I have a personal interest. At that time, I was attending and considered researching Buddhism and Buddhist meditation classes in Tel Aviv. Like myself, many participants in these events tend to be from upper-middle-class, highly educated, secular-liberal Jewish backgrounds. When I discussed this option with one of my teachers, Professor Nissim Mizrachi, he encouraged me to look for a more unexpected setting where these types of meditational techniques might be taught and practiced, such as among right-wing, religiously-motivated Jewish settlers in the West Bank. Being concerned about the country’s and the region’s politics, I took his advice. Initially, I assumed this would be a very minor phenomenon. Gradually, however, I realized that Buddhist-derived insight (vipassanā) and mindfulness practices are quite popular among religious Zionist Israelis—especially younger ones, in their twenties and thirties. (Many such people live or study in religious seminars in West Bank settlements.) When mentioning my research interests to religious Zionist acquaintances, they would often reply by stating that they have a friend who has travelled to India or other parts of Asia following their military service, or who practices meditation. Additionally, some Haredi (ultra-orthodox) Israeli Jews also learn to meditate, often attending the same events as religious Zionists, though in smaller numbers.

Pillows, sheets, and other bedding fill a room and mostly cover the floor. Two large pieces of fabric hang on the walls and cover a large portion; one is shimmery pink and the other is orange with a partially visible design printed on it.
Credit: Ori Mautner 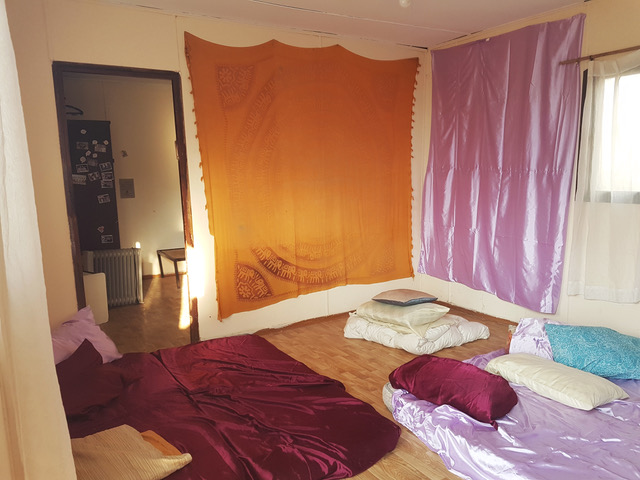 JB: Meditation and ultra-orthodox religious praxis seem so different from each other to me. And yet, obviously, the Haredi see some connection, perhaps by way of similarity or possibly due to perceived complementarity. What is the attraction of meditation to your informants? And what does that interest tell us about Haredi religiosity?

OM: Haredim and other orthodox Jews who practice such meditational techniques usually regard them as forms of therapy that complement more traditional Jewish practices such as praying, studying Torah, and performing the rituals prescribed by Jewish-law (halacha). Meditation, they think, can invigorate the enormous spiritual or mystical potential found in such Jewish practices, which is insufficiently realized as part of contemporary orthodox Jews’ high-paced lives. Indeed, for such people meditation is a body- and psyche-centered therapy that allows Jews to make fuller use of conventional Jewish practice’s capacity to engender experiences of “closeness to God.” This is one of the points I try to make in my paper.

What I think this tells us about the religiosity of Haredim, and of orthodox Jews more broadly, is that currently more and more of them wish and even demand their inner states or experiences to be deeply involved in their everyday religious lives. Praying, studying Torah, or saying a blessing without intent or awareness and without, at least occasionally, feeling elevated when doing so, no longer feels sufficient. My informants handle this desire largely by borrowing practices that facilitate such inner states, but have not traditionally been employed by Jews, and finding similarities to them or other justifications for adopting them in earlier Jewish traditions (particularly Hasidism and Kabbalah).

Another striking feature of borrowing of Buddhist-derived meditational forms is that for these practices to be sanctified, or become significant from a religious-Jewish standpoint, they first need to be secularized or decoupled from Buddhist religion. Indeed, relying on many modern Buddhist and non-Buddhist meditation teachers’ framing of insight meditation as universal and nonsectarian, orthodox meditators often depict it as psychological and spiritual but not as religious. And yet they only consider meditation’s secularity to be applicable to Eastern or other non-Jewish religious traditions: when they adopt meditation, orthodox Jews assign to it religious Jewish meanings and roles. So, paradoxically, it is vipassanā’s secularization or differentiation from Buddhist religion that prepares the way for its subsequent employment in orthodox Jewish religious contexts.

JB: In your paper, you also mention that this is not an entirely unproblematic exercise for your informants—that there are dangers posed by vipassanā meditation as well. What are those dangers? And how do your informants attempt to insulate themselves from these threats?

OM: The dangers are of a few different kinds. First, there is the risk of learning meditation in settings that appear to contravene Jewish law. According to several of my informants, this happens primarily when Buddha statues, which for them are potentially idolatrous, are present. While most of the settings my interlocutors attend don’t contain such statues, a few do, and some orthodox meditators find themselves there, either wittingly or not, and have to cope. Sometimes they leave or get the organizers to take out the statues, but on a few occasions I witnessed them staying despite being unhappy about these statues’ presence. There is also, at least in some settings, the related danger of learning meditation in the context of Buddhist thought, which is indifferent to the Torah and doubts the existence of the creator God and of the soul.

Another problem pertains to the bodily discipline that meditation requires. Most orthodox meditators’ physical dispositions can be described as expressive. Following certain Jewish teachings, particularly Hasidic ones, they like moving around uninhibitedly, taking space, dancing, singing, and communicating their emotions spontaneously. While the self-fashioning tone of the vipassanā practices they encounter is at times influenced by similarly expressive or romantic tendencies, on the whole it is more ascetic and requires more self-control. For some this tension is difficult to resolve. Whereas most orthodox meditators accept the imperative of restraining their bodies and minds when learning meditation (after all, the majority have some military background), others are unable or unwilling to endure the discipline that practicing it involves.

Finally, most of my informants have a problem finding a setting for learning meditation that they feel is satisfactory in terms of all their main values or things that really matter to them regarding meditative practice. Each setting ends up being either too Buddhist in its philosophy, too ascetic in its practical approach, or just insufficiently helpful in terms of spirituality (and therefore too similar to the orthodox Jewish settings they normally attend). In my thesis, I discuss the practical ways in which my interlocutors deal with being dissatisfied regarding the different meditation options that are available to them. I explain that they either amplify whatever positive dimensions they find in the settings they attend, or accumulate such dimensions across different locales and over time, and that usually they do some degree of both.

A number of people stand outdoors, forming a small crowd. Trees and smaller groups of people can be seen in the background. Overhead, a string of lights hangs, illuminated.
Credit: Ori Mautner 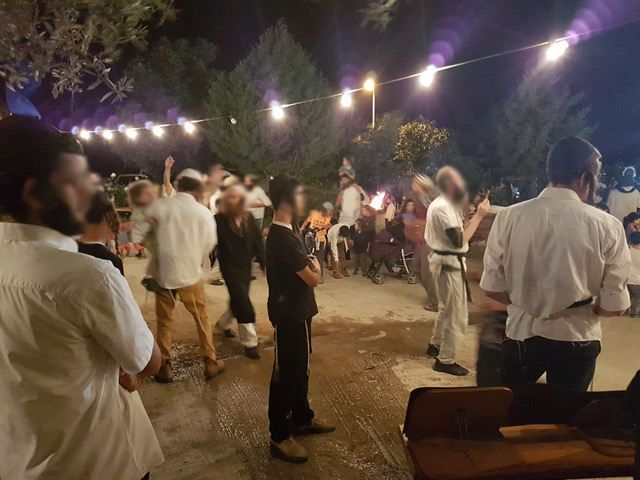 JB: Finally, this seems to be a very challenging field project. Anthropologists of religion oftentimes find themselves having to discuss the experiences of others, but it seems that this project might pose special challenges as far as the participant portion of the classic participant-observation dyad goes. What was fieldwork like, and how did you try to capture a meditative experience that, at least naively, might seem to be extremely personal?

OM: Perhaps surprisingly, the meditation-related experiences I had during fieldwork often seemed to be similar to those of my interlocutors. Despite our usually quite different approaches to theological and political matters, when talking about meditation we were often able to feel rapport and to bond. This, I think, is connected to the fact that normally we were operating under the shared assumption that meditation concerns (at least partly) a universal mental dimension—one of awareness of ”inner reality”—that precedes any metaphysical assumptions or value commitments. Additionally, being fellow Israeli Jews, we share quite a bit of cultural intimacy to begin with, and for my interlocutors it was important to approach secular Jews like myself warmly and informally—meaning that our relationships were on the whole quite amiable.

To be sure, unlike me, my informants relate their meditation experiences to feeling closeness to the Creator, to His commandments, and to the fate of the Jewish people. And yet gradually, I was able to experience the attraction of orthodox Jewish belonging for my interlocutors. They consider the Jewish people to be playing an important role in redeeming the cosmos—a cosmos directed by God, who benevolently guides each person’s life according to what is best for them. So while Jewish belonging for observant Jews involves the expectation of performing numerous religious commandments, such belonging also provides a sense of purpose and consequently considerable satisfaction and comfort. Ultimately, meditative experiences, despite their Buddhist background, entrench most orthodox meditators’ Jewish affinity.

Ori Mautner is an anthropologist of religion, ethics, and politics in Israel-Palestine. His PhD research at the University of Cambridge examines the ways orthodox Jews, and Jewish activists for solidarity with Palestinians, employ Buddhist-derived meditation for pursuing their religious and political objectives. Next, he plans to study non-liberal approaches to tolerance.