What can we learn from the individuals who embody the diversity that banks and other corporations now seek?

In 2019, Anna Novak began work as an analyst for one of Wall Street’s largest and most prestigious investment banks. A few weeks into the job, she arranged a private meeting with the vice president leading her team. She announced that while she was presenting as male at the time, she was actually a transgender woman and wanted to begin a gender transition. Anna’s VP was initially surprised, but her first question was logistical: When will this transition occur? “I hadn’t actually thought that far ahead,” Anna explained during one of our conversations. “Until then I was more focused on the coming out a bit. I needed to give enough runway for everything and that would be around three or four months, so that’s what I told her, and we basically went with that.” With Anna’s permission, the VP relayed Anna’s news up to the managing director. The MD met with Anna that same day and then told the partner above him. That week brought various meetings with human resources to lay out the plan. Over the next few months, Anna prepared her team, changed her employee record, and campaigned to add trans health services to the bank’s employee medical plan. On the “go-live date,” she arrived at the office using a new ID badge, introducing herself by her new name, and sporting her new look. Since then, a handful of others at the bank have transitioned using the process Anna laid out.

The arrival of openly trans employees on Wall Street follows a decade during which New York’s largest financial institutions have embraced the topics of diversity and inclusion (D&I) and LGBTQ+ rights. By 2013, Wall Street executives had announced their support of same-sex marriage in the United States and mobilized against legal discrimination globally. Every year, the banks sponsor events such as Out for Undergrad where they assemble LGBTQ+ students from around the United States and recruit them into front-office analyst positions. They also sponsor employee “Pride” networks that organize LGBTQ+ social events, educational panels, and even client dinners. At the turn of the century, LGBTQ+ bankers typically minimized their queer difference and came out in limited cases. Now, they bring their full selves to work, as they often say, seeing their sexuality and gender identity as important aspects of their presence on Wall Street—important in the sense that they could only be fully content and productive at work if they are out and feel no need to cover their queer difference.

Several people together carrying a rainbow flag through the streets of New York during a pride parade. Large crowds fill either side of the street waving smaller flags, and a line of floats follows behind.
Credit: Steven Pisano (CC BY 2.0.) 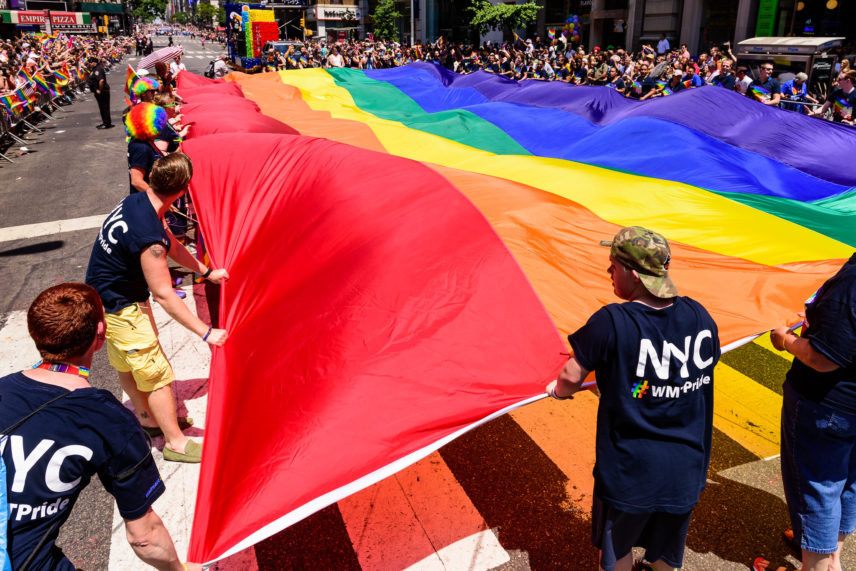 Every June, Wall Street banks advertise their D&I with branded Pride parade floats and a procession of their LGBTQ+ network employees.

With this shift comes new talk among executives, business researchers, and journalists of the business case for D&I. D&I, the story goes, is simply good business. A 2018 McKinsey report on the topic claims that diverse companies will “win the war for talent,” “improve the quality of decision making,” and “increase innovation and customer insight.” It explains further that diversity improves a company’s public image—a valuable benefit when the public scrutinizes corporations for their social impacts more than ever. This, too, supposedly helps a company’s bottom line by expanding its “license to operate” in new markets. Using this business case, the banks justify their spending on D&I programming and public advocacy as matters of human capital, presenting them as economically necessary. While this approach gives Anna and other LGBTQ+ people the space and resources to come out at work, it ultimately limits their full inclusion and professional advancement on Wall Street.

Anna initially presented her experience of gender transition on Wall Street as a success. Since she was the first to come out as transgender at her bank, no one in the business—Anna included—had any model to follow and few of the required bureaucratic processes were in place. But by approaching the bank on its own business-case terms, however, she reportedly faced little resistance to her needs. At one point, for example, she needed medication not covered by the corporate medical plan. Rather than bear the cost herself, she figured that if she raised this issue to HR as a potential public relations risk, she could convince the bank to adjust the plan immediately rather than wait until year-end when changes are generally implemented. In Anna’s view, the bank’s business-case logic made this kind of transactional approach most effective: “Framing is everything. If you can frame it as in the company’s best interest to do certain things, you’ll be a lot more successful [at getting what you need].”

Anna also managed her transition using best practices of the kind associated with any work on Wall Street. For example, she tuned her transition to the rapid pace of work in finance, making her transition much faster than others. In response to her manager’s request for a clear go-live date, she promised a timeline that prioritized order, speed, and efficiency—offering only as much time as necessary to complete one task before moving to the next. Similarly, Anna modeled her coming out conversations after the standard socialization process made before any important change in the business. She prioritized those whose work would be impacted most, and to those conversations she came prepared with clear next steps and responses to frequently asked questions. In the transition, her coworkers could find the project and stakeholder management best practices they may have learned during banker training or business school. “A lot of it was trying to use terms that everyone could understand […] terms that people would be able to identify with and work with,” she explained.

As Anna reflected further on her experience, however, it became clear that she still faced challenges during and after her transition. With her inclusion tied to business performance, the stakes of her work increased:

I faced a tremendous amount of pressure to be the first one to represent an entire community. I can have one bad day, one bad interaction, and that could color the way that people think of an entire group of people and the potential of that group for a long time to come. This can be very hard, especially when you’re starting hormone replacement therapy and estrogen is being introduced into your body…which by the way is one hell of a drug!

She was no longer advancing just her own reputation, but also the reputation of all trans people.

On top of her work as an analyst, Anna found herself tasked with what I call “diversity work.” Like her LGBTQ+ coworkers, she organized and attended diversity recruitment, social, and educational events in the LGBTQ+ network. She also organized public events and wrote manager training materials about common trans issues. Explaining the necessity of this work, a gay male banker at the same firm cited a so-called “currency of authenticity…It’s almost this quid pro quo: the firm gives us the space to be who we are, but there’s an expectation that you give back in some way.” By producing and cashing in this currency through diversity work, Anna and others earned access to the support networks, mentorship opportunities, and HR they needed. Yet they must balance this work with core responsibilities to the business and excel at both.

As the anthropologist Karen Ho shows us in her work among New York investment bankers, Wall Street’s social structure is driven by meritocracy and visible displays of hard work. Yet Ho points out that what counts as merit and hard work is defined by the cultural value of “smartness”: Wall Street’s particular “sense of ‘impressiveness,’ of elite, pinnacle status and expertise.” In Anna’s case, diversity work does not afford her this smartness and therefore contributes little to her career. “After all of this, I have senior mentorship and sponsorship at every single level of the firm. I did everything I could to give as much as possible to the firm. And yet after years of trying to transfer into [a more prestigious] division, I was no closer.”

The payoff of Anna’s diversity work has further diminished, and with it the value of her identity as human capital. “Now that people at the management level have come out, my presence from the bank’s perspective more or less no longer exists. Now they can sell the story of their more senior folks.” As her identity becomes less unique, it depreciates like any other form of capital. In many ways this is a tragic outcome of her own success. She takes pride in paving the way for other trans people at the bank, but in doing so she has reduced her personal value to the business. “They’ve gotten exactly what they needed to out of my experience, and it’s made the experience of others a lot a lot better, which is awesome, but any spotlight from that has certainly diminished because of who followed…In a lot of ways this taught me that [the bank] will never really love you back.”

This portrait of corporate D&I adds another perspective to growing critiques of the topic. Queer activists and academics object to the assimilationist aspirations of the mainstream LGBTQ+ movement and its negation of the radical potential of queerness. To this end, the sociologist Jane Ward shows us how newly available corporate sponsorships of queer activist organizations have only created “the most room for those who embody predictable and fundable kinds of diversity.” While pertinent, these accounts tend to overlook the subjective, lived experience of D&I, instead focusing on institutions and communities. Anna’s story—just one of many—shows the upside of focusing on the individuals who produce the diversity that corporations now seek. Through their stories, we can better understand the extent to which D&I enables new possibilities for fashioning elite selves while limiting them based on their productive potential. Moreover, we can better understand how concepts like “diversity,” “identity,” and “queerness” operate and evolve under contemporary forms of capitalism.

Names have been anonymized and bank details changed to ensure privacy.

Johannes Lenhard and Daniel Souleles are section contributing editors for the Society for Economic Anthropology.

Spencer Kaplan recently received a master’s degree in anthropology from the University of Cambridge. He plans to begin a doctoral program in anthropology starting fall 2021. He previously conducted research on corporate diversity and inclusion with a focus on its role in the self-fashioning of LGBTQ bankers on Wall Street.