Gifting Water in a Climate-Impacted Megacity

One hot summer afternoon in Ezbet Khariallah in June of 2018, I take a long slow drink out of an olla-style charitable water fountain, or sabil. The water is moderately cool, and tastes of clay. From where I am standing, I have a view that encompasses all four of the main forms that modern sabils take in urban Egypt: olla, zeer, coleman, and coldaire (see ElDidi and Corbera 2017 for a discussion of sabils in rural Egypt). In Ezbet Khairallah (or Ezba), one of Cairo’s largest informal areas, sabils are a popular method of gifting water directed to neighbors and passers-by, and their creation gathers merits accrued with God in the Islamic tradition. Those merits, or hassanet, are often passed on through a dedication to a departed loved one and can be shared by those who participate in the maintenance of the sabil. Sabils in Ezba also reflect a longer history in Cairo of buildings built for the dual purpose of distributing free water and offering Qur’anic instruction, sabil-kuttab (Mostafa 1989). By situating free potable water in streets, sabils extend Cairo’s water infrastructure and are one of the ways that residents are responding to the thermal discomfort of their climate-impacted city. Sabils thus create a system of mutual aid that builds on local tradition, religious precepts, and notions of neighborly relations to gift water where and when people need it. The amplification of sabils in Cairo can be seen, in part, as a local response to this increasing thermal discomfort and serve as an example of how climate change corresponds with lived experience as a form of knowledge in local communities (Rignall 2019).

Residents of Ezbet Khairallah report that there had been few sabils there before the large-scale informal connection to nearby municipal water supplies some 30 years previously. Few people could afford the time or effort of hand-carrying water from neighboring areas or purchasing it from the infrequent rounds of informal water sellers only to give much of it away. Yet it was common during that time, for residents to knock on a door and ask for a glass of water from a neighbor or from a nearby house as they passed through the area. In the summer of 2018, residents noted that there had been a dramatic multiplication in the number of sabils in the area over the last two years. In part, this increase was a seasonal response that has been intensified by climate change, and in part it was a response to the particularities of the fasting month of Ramadan occurring during this hot period. The creators of several of these newly-established sabils recounted having heard of deaths from heat exhaustion and recalled their own experiences of thirst as they moved through the urban landscape. Others pointed to the nature of their street as particularly hot (unshaded), long, dry (without other sabils nearby) or busy (a main thoroughfare or a location with many workshops) as reasons for their decision. This intersected with personal stories, as some families and small business owners who experienced the loss of a loved one transitioned a zeeror coleman water jug from personal use to sabil, changed from occasional providers of water to dedicated sabil keepers, or upgraded from one form of sabil to another. These temporally and sensorially induced sabils added on to an already existing network of charitable drinking fountains that were created as a local response to urban water scarcity.

Four photos of different types of sabil are side-by-side with their corresponding name below each image. First, two small clay pots sit on a shelf attached to an exterior wall; below the photo is text reading “Olla (plural ollel). Next is a large clay canister with a piece of wood covering the top opening with a metal cup attached to a string; below the photo is text reading “Zeer.” Third is a plastic water cooler that rests on a table and a metal cup is attached to the cooler by a chain; the text below it reads “Coleman.” Fourth, a tall, white metal cabinet with faucets stands in front of a wall; the text below the photo reads “Coldaire.”
Credit: Tessa Farmer 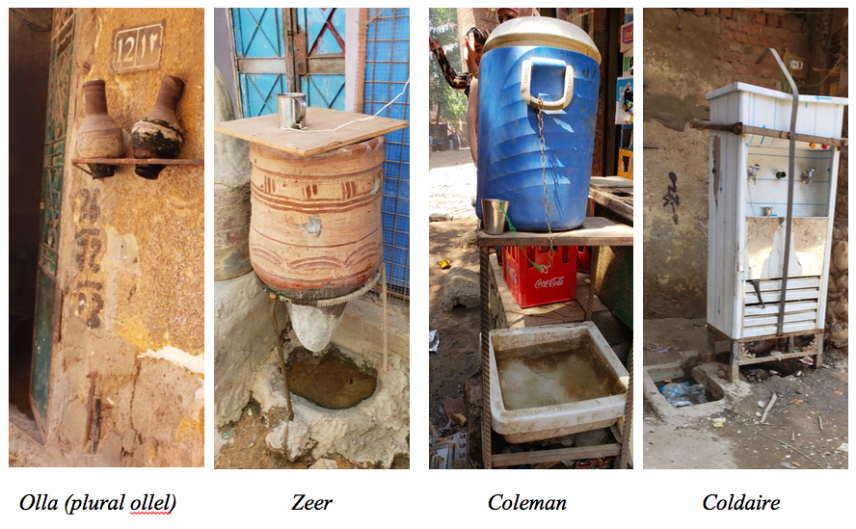 Cairo’s status as a megacity means that there are a number of water challenges created by a combination of population growth and uneven urban development that intensify in the context of climate change (Li, Endter-Wada, and Li, 2015).Cairo’s urban development over the last half a century has been marked by neoliberal processes of state retreat and a bifurcated urbanization with expanding informality in high-density housing and small-scale enterprise alongside the development of wealthy gated communities (Sims 2010). In response, lower income residents of the city have found ways to make life possible by expanding into the street for much of their social, political, and commercial life—what Asif Bayat calls the city “inside out” (2012). City residents have adapted their neighborhoods in a variety of ways through vernacular built forms to meet their needs (Ghannam 2002). Residents of Ezbet Khairallah, as elsewhere in Cairo, have picked up the tradition of gifting water through sabils as a way to reshape their physical surroundings and to provide water to people as they live their daily lives; shopping, traversing and doing business on Cairo’s streets in the “city inside-out.” As Cairo is impacted by changing climate patterns and an increase in the intensity and duration of extreme heat, these urban forms and patterns of living in the urban landscape become ever more relevant.

Due to its location, Cairo has long been known as a “hot” city, but these heat issues are intensified by the Urban Heat Island Effect (UHI) and climate change. The size and geometry of urban infrastructure, the expanse of impervious services, and human activity impact the ambient air temperature and can lead to an increase in thermal discomfort (Abutaleb et al. 2015). Large cities such as Cairo with dense populations are more vulnerable to UHI due to the dominance of tall buildings and narrow streets which trap solar radiation (Bakarman and Chang 2015). Through testing seasonal and diurnal ranges of land surface temperatures for Greater Cairo in 2012, Abutaleb et al. recorded land surface temperature 5–22 °C higher on average in urban Cairo than in rural areas (Abutaleb et al. 2015). Onto this picture is the rise in temperatures expected for the region as climate change unfurls, with seasonal and sub-regional variation (Bucchignani, Mercogliano, Panitz, and Montesarchio 2018).

Sabils are important parts of the built environment of Cairo, drawing on religious precedence and enacting everyday ethical notions of reciprocity. They are particularly important in the changing environmental conditions of Cairo and point to the ways in which small vernacular changes to the urban waterscape based on shared somatic experiences and collective notions of reciprocity offer an alternative to narratives of disaster and rising conflict (Mason 2019). Ongoing research on sabils is exploring the diversity of material forms; practices of care and repair for clay and metal water infrastructure; embodied notions of smell, taste and temperature; a shifting history of social responses to a material context of hardship; vernacular memorials; and practices of neighborliness that draw on religious traditions to shape the livability and transversabilty of Cairo’s urban landscape.

Tessa Farmer is assistant professor in the Middle Eastern and South Asian Languages and Cultures Department and the Global Studies Program at the University of Virginia. Her current book project, “Well-Connected: Everyday Water Practices in Cairo,” investigates the ways in which lower-income residents of Cairo, Egypt, work to obtain sources of potable water and deal with the ramifications of sewage in their urban ecology.