Does technology mean something different when it leaves the Valley and goes to the Beach?

In the summer of 2016, during preliminary fieldwork in California, I met with virtual reality (VR) innovators in San Francisco and Los Angeles. I wanted to find out what was happening with this technology in Silicon Valley versus the place Angelenos were beginning to call Silicon Beach. Others were also flowing between these locations. While in LA, I found myself invited to a launch party in the Hollywood Hills to celebrate a San Francisco-based venture capital fund opening a VR production studio in LA. “Tech bros” from San Francisco were bused down to this party, mixing awkwardly with YouTube personalities. Our host noted this collision of worlds during a champagne toast, both aesthetically (remarking on how much more attractive people in LA seemed to be) and substantively. This VR studio, he explained, would combine the tech knowhow of Silicon Valley with the storytelling talent of Hollywood. 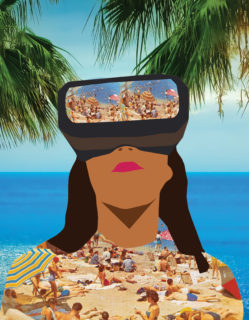 It is two years later and I am back in LA, spending my research leave at the Beach and studying the VR community here. When folks outside the VR world hear about my research, they are surprised that I’m in LA, assuming I’d be in San Francisco, Seattle, or a different site more commonly coded as a technology center. This upended expectation is one of the reasons I’m centering my study of technology here, following the current VR wave and asking how technology in general and VR specifically are shaped by the place of development. Here on Silicon Beach the familiar has been made strange and that is shaping my analysis of this technology.

Scholars of science and technology (S&T) know that place matters. Engineering teams embed their norms and values in objects and algorithms; adoption (or lack thereof) of technology is shaped by local practices. At the same time, ethnographic studies of S&T often take multi-sited and networked approaches, essential for studying the complex assemblages that texture technosciencescapes but ill-suited when addressing questions regarding the locality of technology.

What, then, is technology in LA? Silicon Beach describes the tech companies clustering around Santa Monica, Venice, Marina del Rey, Culver City, and a few creeping eastward into Downtown. In a city where “The Industry” has long stood for Hollywood, the rise of Silicon Beach places technological development in close quarters with entertainment, a dynamic that distinguishes Silicon Beach from other milieux of innovation (Castells and Hall 1994). Whereas aerospace has traditionally been a technological driver in Southern California, Silicon Beach refers to social media companies, startups “disrupting” service industries, and technology trends like VR, augmented reality, artificial intelligence, and blockchain.

In asking what technology is in LA, I propose thinking about whether there is such a thing as “technological terroir.” Just as local differences between wines and cheeses are studied, sought after, and even cultivated, might the same be true of technology? How might the salty air and imagineering of Silicon Beach texture VR? How might a different sense of technology promote greater diversity in the pool of tech workers?

The VR community in LA focuses on producing content. When discussing experimental or innovative VR, the conversation is rarely about hardware but instead about the experience. While folks in Silicon Valley and Silicon Beach acknowledge the need for both satisfactory headsets and compelling content, LA leads the latter category and thus shapes the overall sense of what VR is and can be. Commercial headsets, the object of innovation in Silicon Valley, are tools or delivery mechanisms here on Silicon Beach. To study technological innovation as it pertains to VR in LA is to study how visual, aural, and other sensorial means can convey a captivating story. It is to expand what “the technological” means, such that storytelling and aesthetics become part of demonstrating expertise and producing knowledge.

The different foci of the Valley and the Beach are evident in community speculation over why the VR commercial market hasn’t grown as quickly as initially projected. Innovators in LA blame Silicon Valley’s failure to deliver good enough headsets—only in the last few months have headsets begun to lose the wires that tether them to the required power PCs. In contrast, the Valley blames its southern counterpart for not yet creating experiences that deliver on the potential of the technology, be this content that is emotionally compelling or physically transporting. They both borrow a Hollywood trope—if you build it they will come—but what needs to be built better changes depending on where one is situated.

Being sensitive to technological terroir is not just about understanding how collaboration and development persist despite differences (Galison’s trading zones [1997] and Star and Griesemer’s boundary objects [1989] both provide explanatory frameworks for this). It is rather about understanding how the very contours of what counts as a particular technology (or technology in general) is locally sculpted. This can be illustrated by the ways in which denizens of Silicon Beach think of themselves as part of the tech world.

I was having lunch in Venice with a journalist who produces and promotes VR pieces. We got on to this topic of what tech is in LA and she observed that there aren’t nearly as many programmers and developers in LA as in San Francisco. As a consequence, although artists might have fantastic and innovative visions, without this local talent they have a difficult time executing their ideas. We paused in our conversation, wondering what it means to have a growing tech sector without the traditional workforce. I get the impression from reading job postings and having casual conversations with LA workers employed at Silicon Valley-headquartered companies that the focus here is on marketing and media partnerships. Engineering takes place in Silicon Valley, aesthetics and content are produced by Silicon Beach.

The first few months of my fieldwork were consequently rocky. I found myself, an anthropologist of technology, in a place where technology seemed sparse even as VR seemed abundant. But as soon as I unsettled my preconception of what technology is (a structure of feeling shaped by a decade in Cambridge, Massachusetts, and previous fieldwork in the Bay Area), I began to reconnect with my object of study. During preliminary fieldwork, I had been pleasantly surprised by the number of women in the VR community and decided to use my research to further bolster these voices. As one might expect, many in the LA VR community started out in film. However, when compared with the rigid structure of Hollywood, VR represented a chance to leapfrog a long process that held no guarantee of success. As women narrated their career paths for me, perhaps while looking through the lens of #MeToo, they further described VR as an alternative to male-dominated Hollywood. Because neither VR nor technology had clear leaders in LA, here was opportunity. The women I have met during fieldwork are young and old, black and white, straight and queer, and everywhere between these binaries. In this city of fantasy, everyone is well cast to lead this new field.

At the same time, I was puzzled that these artists, producers, and brand ambassadors—all pursuits I had naively placed outside of technological work—took pride, through their VR work, in being “women in tech.” This gave me pause, as it didn’t match what I thought it meant to “be in tech.” But I now interpret from these affiliations that “technology” is something ontologically different here. Technology is not strictly programming or engineering, but it encompasses working with—storytelling with—emerging tools. It’s not that tech isn’t here, it’s that tech is different here. And being sensitive to this technological terroir informs my consumption (and analysis) of this place.

This is not to say that traditional attitudes toward technology and the kinds of people who work in the industry are absent in LA or that this capacious meaning of tech does not exist elsewhere. And of course the VR community is deeply networked—devices, knowledge, and people come together in virtual spaces online as well as at physical conferences and film festivals almost every month. Rather it’s to highlight the different balance of components that comprise the tech scene in LA. It’s to attend to how local textures are important features of broader networks. And it’s to consider how if technology is more open to diverse participants in one setting, how that aspect of its terroir might be prized and thus cultivated elsewhere.

Silicon Beach as a branding strategy seems to have caught on, at least locally. Maybe LA doesn’t have the silicon knowhow, but its subtropical coastal climate—a climate that the city’s nineteenth-century boosters advertised as healthful and restorative—continues to inspire the fantasy that one can live a carefree lifestyle at the beach. And as the wave of criticism against Big Tech crashes down on Silicon Valley, perhaps this fantasy will become ever more appealing. Fantasy is LA’s primary export after all, and on Silicon Beach this doesn’t lie outside the technological but is central to the people, the place, and its products.

Lisa Messeri is an assistant professor of anthropology at Yale University. She is the author of Placing Outer Space (2016) and is currently writing about virtual reality in Los Angeles and beyond.