Harriet E. Manelis Klein, linguistic anthropologist, passed away on September 4, 2021, in Briarcliff Manor, New York. Born on September 8, 1936, in New York City, Harriet and her sister Marion grew up in an English- and German-speaking home that also introduced them to elements of Yiddish, Polish, and Arabic. After her marriage to Herbert Klein, Harriet and Herb moved to Chicago, where she completed a BA in Classics at the University of Chicago (1958), studying Greek, Latin and Hebrew and teaching Greek and Latin at the University’s lab school. During this time, they became proud parents to Rachel, Daniel, and Jacob. The family had extended stays abroad due to research and visiting professorships. Harriet studied the Indigenous languages of Guaycurú (Toba)(Argentina) and Guaymí (Panama). Her doctoral research resulted in her 1973 Columbia University dissertation “A Grammar of Argentine Toba: Verbal and Nominal Morphology,” published in Spanish in Uruguay in 1978. Harriet’s numerous articles and edited volumes focused on aspects of time and space at the formal level of language as well as identities, language use and cultural practices.

She took a tenure-track position at Montclair State College in 1972, where she served as Deputy Chairperson, Director of International Studies, Special Assistant to the President, and Full Professor. Harriet’s service to the profession was extensive: as Book Review Editor for the International Journal of American Linguistics, as program chair for multiple meetings of the American Anthropological Association and the Linguistic Society of America, and as contributor to the International Congress of Americanists, the International Linguistics Association and the Society for the Study of Indigenous Languages. Through her work with the Committee of the Status of Women in Anthropology and the Committee on the Status of Women in Linguistics, Harriet worked tirelessly to advance gender equity in academia. She supported her South American colleagues with warm hospitality, often sharing her room at annual professional meetings with those on tight travel budgets. She met and mentored Vera Mark, Stephanie Kane, and Joan Gross when they were graduate students at University of Texas-Austin, eventually becoming lifelong friends. Later she and Kane enjoyed a fruitful collaboration in several conferences and workshops and coauthored “Gringo/a as Sociolinguistic Fractal” in Ethnologies (35:1, 2013).

Following her retirement from Montclair and her divorce and subsequent remarriage to Perry Kalick, Professor of Education at Lehman College, she relocated to Long Island in 1998. She became a Visiting Scholar in the Department of Linguistics at Stony Brook University, an active and valued member of the Stony Brook linguistics community. Harriet and Perry took immense joy and pride as parents and grandparents to their large blended family.

Harriet’s wide-ranging knowledge, wisdom, kindness, unwavering commitment and extensive service to multiple disciplines will be greatly missed. A collection of her field recordings and notebooks may be consulted at the AILLA, the Archive of the Indigenous Languages of Latin America, at UT-Austin. An announcement concerning a scholarship in her name will be made at a later date.

A woman is pictured in front of a white railing with a fuzzy horizon visible in the distance. She is smiling and wears glasses, a necklace, and a blue and white shirt with her hair pulled back. 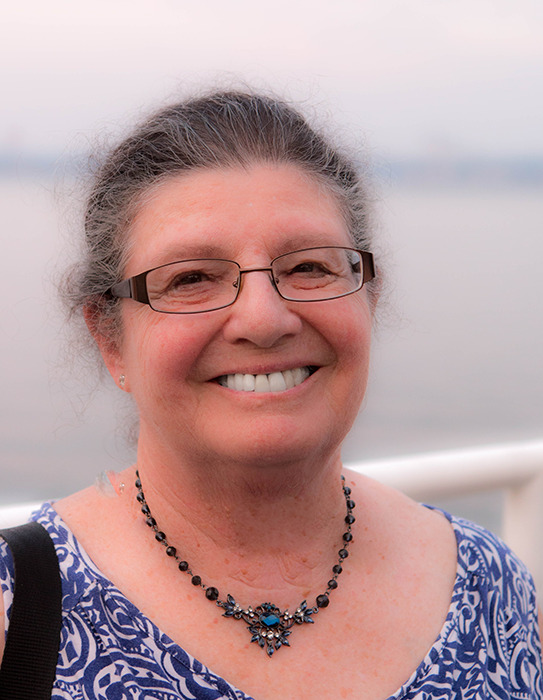