It’s difficult to imagine being haunted in a public space. Regarded from outside, public spaces usually evoke the gathering of large numbers of people; regarded from within, their occupants often do not recognize the space as anything special at all. However, consider public space in post-Soviet contexts, where it continues to be haunted by the machinations of totalitarianism (Harutyunyan et al. 2009) and is always already haunted by histories of surveillance and violent state power, despite nearly three decades of democracy. In this framework, public obituary postings stand as a useful vehicle for delineating the unspoken, ambivalent feelings toward public space and freedom of remembrance that continue to exist long after the end of Soviet influence.

Since the mid-nineteenth century, obituary postings in public spaces have been a prominent practice of revering the dead across the Balkan peninsula and in many parts of Europe. However, this practice has retained its popularity in some countries more than others. Bulgaria is exceptional in that this practice still maintains a significant presence. This is partially due to the fact that during the Soviet era, for reasons unknown, Bulgarians retained the right to post their obituaries, known as nekrologs in Bulgaria, in public spaces (similar nekrologs in newspapers, however, were forbidden) (Karaboeva 2011). This ban on newspaper nekrologs, effective from 1944 through 1988 and unique to the country, cultivated a rich nekrolog posting practice in Bulgaria that continues today.

My ethnographic work in the summer of 2018, sponsored by the Society for the Anthropology of Europe and the Council for European Studies, entailed engaging with employees at funerary homes and organizations where the bereaved commission nekrologs, in order to understand how nekrologs circulate in the public sphere and compete with other forms of print media. Traveling from office to office in Sofia, Bulgaria, and interviewing one employee after another, I was surprised to find that few professionals offering such a commonplace service talked about attributes of the nekrolog other than its dimensions, design, and content. All of the employees with whom I spoke were sincerely confused and slightly stunned that I had an academic interest in this practice. Their relationship to nekrologs indicated to me the significant amount of unspoken sentiment surrounding this ubiquitous practice. 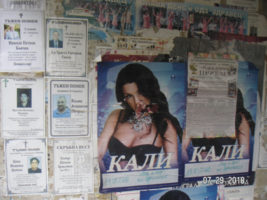 Nekrologs in Bulgaria compete with advertisements for concert events in the public media space. Maria Lechtarova

Given this ethnographic background, nekrologs have always been imbricated in deeply political questions of where, when, and how the dead have the right to be remembered. The nekrologs themselves stand as a uniquely versatile media that appear unexpectedly, in a wide variety of public posting spaces. Custom dictates that a nekrolog be made for every deceased person in Bulgaria. Deceased citizens are commemorated by their loved ones with a nekrolog that is posted in commonly visited public spaces, such as cemeteries, post offices, bus stops, church walls, even telephone poles. Traditionally, the spaces from wherein nekrologs address their viewers must be associated with the life of the deceased and his or her loved ones, but these locations are also often public space burdened with the legacies of totalitarian control over print media and other forms of personal expression.

As media with the socially-codified power to appear anywhere in public, nekrologs have the capacity to haunt the viewer with an omnipotence historically associated with the socialist and post-socialist state. Circulating outside the direct parameters of the law, nekrologs mimic the process of haunting by embodying the autonomy of the state in their deregulated posted presence. In this way, rather than an image of the typical ghost, who broods and lingers in quiet confined quarters of old creaky houses, the nekrolog embodies a distributed force that affects the entire public domain. Through the public nekrolog, haunting becomes a collective experience of remembering totalitarian forces like the Soviet Union through the apparatus of print-media.

Because the families of the deceased decide where to mount the nekrologs, and there are no legal regulations for removing the nekrologs, all living citizens circulating in the public eye hold equal power in observing the nekrolog—or removing it. Given the non-existent codes for nekrolog maintenance in public space, every viewer maintains the right to post or remove any nekrolog they choose. In this way, individuals have the capacity to question the authority not only of memories but also of ways of remembering embedded within the ritual practice of the nekrologs. This process of renegotiating memory happens with each nekrolog that is posted and removed, constantly haunting and echoing the nekrolog’s democratic power to enable its users to choose a particular style of memory that fits their bereavement needs.

Public space becomes a polyvalent field where remembering both intimate personal memories and tumultuous histories of totalitarian public media regulations are rehearsed. Within these polysemous habitats, nekrologs interact with media of various functions, from advertisements to political messages, as their placement orients them to compete for the same observer’s gaze.

In their essence, nekrologs in Bulgaria prompt us to consider how Soviet-style totalitarianism haunts. At the same time, the nekrolog medium itself is haunted by the public, who maintain the right to interfere with this practice by removing or manipulating posted nekrologs. In this way, the nekrolog media practices function as an echo chamber for the suspect transparency of democratic government, while also reflecting a totalitarian legacy in the public’s absolute authority to decide the fate of these postings. Nekrologs occupy and elucidate the complexity of democratic public space by prompting us to consider the similarities between the post-Soviet process of bereavement and the deeply engrained habits of post-Soviet citizens’ circulation in public space. Both continue to be haunted by memories of the past, forcibly occupy the gaze, and circulate in a suspect, amorphous conceptualization of a public still embroiled in historical trauma.

Maria Lechtarova is a third-year PhD student in sociocultural anthropology at New York University. Her dissertation project investigates death commemoration rituals in the Balkans. She was the 2018 winner of the Society for the Anthropology of Europe/Council for European Studies pre-dissertation field research grant.