How Do We Listen to the Living?

I opened my twitter on June 15, to read a non-Black person describe the murder of Oluwatoyin “Toyin” Salau as an “act of god.” They quote retweeted a video of Salau’s speech at a rally. This tweet received tens of thousands of retweets before the original poster deleted it. They claimed that her death amplified the message of her speech, which was about the intersections of state-sanctioned and gendered violence against Black trans people and cis women and girls inside the movement. These are my initial musings in response to one of the common discourses surrounding the killings of Black trans and cis women and girls.

When your death is marked as an act of god (that is, an act that sustains and upholds a totalizing White supremacist, patriarchal, queerphobic, and transphobic anti-Black social order), your life becomes sin. Your voice a transgression. No wonder they don’t want to hear you. They tell you worship is to quiet yourself, to swallow your needs, to befriend and save your abusers or killers, who are most often Black cisgender heterosexual men. They ask you to politely teach them how not to kill or to silence or to abuse you while your state-sanctioned death approaches. Death sanctifies you. “Love us, don’t harm us!” you chant, and yet, who hears you before death?

“Can’t find any use for us alive/not knowing we can’t die.”

Korryn Gaines, who told her world multiple times over the course of months that the police would kill her, transformed into a revolutionary symbol after her death. The circulation of her words and the video of the last few hours of her life mark her transition from a vibrant young Black mother (who is cursed by god with the irredeemable stain of Black motherhood) to a martyr-sacrifice. Her last stand was blasphemous. A world watched as she boldly defied the police’s orders, clutching her son, gun in lap. In life, she testified against the ills of god, could not close her mouth to worship, and so to some, including other Black people, her death was righteous and justified. While others—mainly Black women activists, scholars, and others—have taken her words, her image, and her name as a symbol to boldly defy the state and its killer logics. We say her name to mark her life as sacred and to reclaim her from the sea of forgetfulness, where society is quick to discard the names of missing and murdered Black women and girls.

Death becomes the space where Black women and girls speak the loudest. Death provides a masculinist frame to hold for analysis, an “equalizing” way to measure true anti-Black racist harm, while labeling the multiple, intersecting forms of vulnerability and violation that Black women and girls experience—sexual, economic, political, familial—as irrelevant, or, at the very best, corollary to violence’s truest form. Naming a movement as one that sustains Black life itself, without calling for a change in the gendered conditions of that Black life, lays the groundwork for an afterworld that remains structured by the subjugation, violation, and untimely deaths of Black women, girls, and femmes. A queer Black feminist framework is necessary for a reimagination of our (after)lives in the wake of mass, state-sanctioned Black death and violation.

These days, images of Black women protesting proliferate, but often they are accompanied with captions that describe Black women as on the frontlines fighting for the rights of Black men, as if police violence does not also affect us. It is through our deaths, it would seem, that our lives become most legible in this social order, as it is sustained and structured by Black vulnerability to death. But even in death, Black women and girls endure the violence of erasure and subjugation. The framing or reframing of Black women’s and girls’ deaths as god-ordained sacrifice takes away from the tragedy of loss and fits us into a sexist logic that incorporates our loss as the collateral of “antiracist struggle” while marking the killing and endangerment of Black men and boys as completely unnecessary. The loss of Black male life becomes something that we must fight against and avoid at all costs, while the loss of Black women and girls is written off as unavoidable, unremarkable, and thus, forgotten. We are bombarded with calls to protect our Black sons, brothers, uncles, and fathers and are required to ignore the ways cissexist, patriarchal violence makes us vulnerable. We say no more.

At a protest for Black lives, Iyanna Dior was brutally assaulted by Black cis men. She recounted her experience on Facebook and Instagram Live, citing how protests for Black liberation are particularly life-threatening for Black trans women, who not only could be killed if arrested and wrongfully placed in men’s prisons, but who also risk death at the hands of transphobic Black cis men. Iyanna could not have predicted that she would be fighting for her own Black life at a protest centered on the collective fight for Black life, though she knew the reality that many Black trans women who die are killed by Black cis men. Marsha P. Johnson, a Black trans woman, along with her comrades, laid the groundwork for anti-police violence protests when they fought against anti-Black transphobic policing at Stonewall in 1969. Her visionary praxis paved the way, and yet, Black trans women still face brutalization from other Black people during these protests. How do we create a movement that keeps all of our women and girls safe?

Salau testified against harmful structures as an organizer. Fleeing her abusive home, she sought safety and shelter to continue being a light in a dark room in the fight for Black lives. Her last public speech decried violence against Black trans people and cis women and girls—violence that she herself survived. She tweeted about her sexual assault at the hands of one Black man, only to be kidnapped and killed by another. In death, her words ripple through Black activist and academic communities, highlighting once again the ways that violence against Black women and girls becomes subsumed under the fight for Black [cis male] lives. She becomes the “sliding glass door” through which we open the conversation about sexual violation and increased vulnerability in activist spaces. Her death calls attention to the ways we ignore the testimony of living Black girls in our families, in our classrooms, in our departments, and in our movements.

How do we listen to the living?

Black feminist ethnographic methodology provides a praxis, poetics, and politics from which I create a framework for attentive listening to the living that recognizes their differentiated forms of vulnerability—vulnerability that I too experience as a queer Black woman anthropologist and interpersonal violence survivor-advocate. Many of the Black women and girls I work with articulate their precarity at the intersections of multiple forms of violence; they understand that defunding the police will not necessarily keep them safe from street harassment or sexual violence they experience at home or at school. How do we create scholarship that accurately reflects that intersectional movement and does not simply name Black women and girls as those who mourn and organize protests on behalf of Black men and boys?

“Protect Black women and girls while we are living,” we cry. Not some of us: those who you may find attractive, those who ascribe to god’s beauty, educational, career, and family standards. Protect all of us—trans, disabled, abused, unloved, poor, loud, unruly, fat, sassy, ordinary, magical and nonmagical—from police, sexual, domestic, and other forms of violence. A movement, inside and outside of the academy, that does not address our conditions while we are living will never be liberatory. 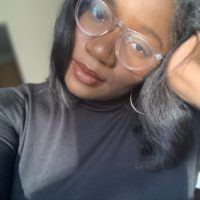 Brendane Tynes is PhD candidate in anthropology at Columbia University, where she studies the affective responses of Black women and girls to multiple forms of violence within the Movement for Black Lives. Her research receives generous support from the Ford Foundation. In her spare time, Brendane dances and writes poetry.