Historian Tina Loo tells us that when a coyote entered an established residential area in Vancouver, Canada, loping down the road in broad daylight, environmental historian Graeme Wynn asked, “What was it doing swaggering- not even skulking, but strutting as though it had every right to be there—through human space in broad daylight? This was haughty behavior indeed in a creature that, for all its dog-like appearance, was a bother, a nuisance, a pest, and a trespasser.” Wynn’s question suggests that by crossing into the human-controlled sphere of a residential neighborhood, the wild coyote became a domestic nuisance. The use of that nuisance metaphor shifts our perception of the coyote from a wild animal free to roam to a pest that has become too emboldened for its own good.

For those who rely on human dominion over nature as the lens for coexistence, there exists, writes Matt Soniak in an Audubon article regarding our hatred of  pigeons, an imaginary border that separates “highly controlled” human spaces from “wild, uncontrollable nature.” When border crossings occur and become disruptive it is because the violator has failed to behave appropriately in a human-defined world. A colony of beaver that enters the domain of the rancher and floods the rancher’s land or a wolf that stresses elk making them more difficult to hunt have in each instance crossed that regulated border created in our imaginations and brought the unmanageable wild into our midst. Assigning negative human attributes to the offending species has been a long-standing response to this defiance of our rules. Hence, the beaver became a pest, the wolf vermin, the bison a nuisance, and the sea otter a thief. For coexistence to reflect our interconnectedness across a shared landscape, it becomes essential to reimagine the narratives of these species. By acknowledging the critical roles species that we have typically discounted play in our well-being, we can begin to dismantle outdated wildlife narratives so that our invented borders become less regulated and more welcoming to wild nature.

To achieve this goal, we need to think about the literary devices that reinforce who can and should occupy our domestic landscapes. When we think about coyotes in New York City’s Central Park or foxes in a suburban driveway we are thinking about animals as outsiders because they don’t belong in these places; instead, they belong somewhere else, someplace wild. The problem with this solution is the ideas of wild and wilderness are social constructs based on the notions that wilderness is a space untrammeled by man and wild is the flip side of tame. In both instances they parallel a spatial understanding that is framed by what it means to live in highly managed spaces like cities or towns versus being in a setting that wildlife ecologist Aldo Leopold described as a distance you can travel in a two-week horse pack trip without crossing a single road. This way of seeing fails to capture how humans and wildlife are embedded in a shared nature; where we exist within an interconnected web.

A black bear is walking in a neighbor’s yard passing by the household’s recyclables can.
Credit: Barbara Jones 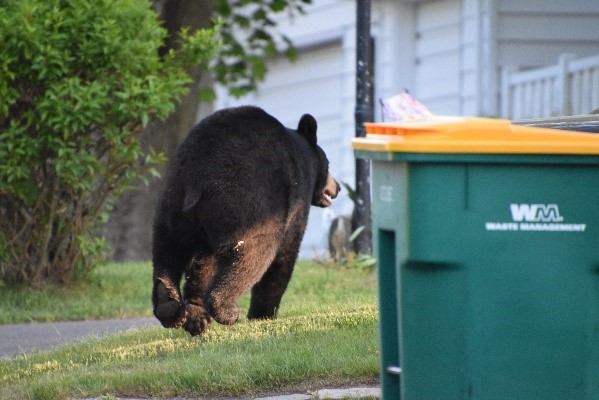 A black bear walking through a suburban yard in central New Jersey.

Wild animals that move through landscapes oblivious of our fixed boundaries or invented geography suffer the consequences of that ignorance. A wolf in Yellowstone National Park is familiar with our presence at approximately 100 yards, the required distance park visitors should maintain from predators like bears or wolves. Immediately outside the park, the boundaries shift between multiple jurisdictions that no longer see wolves as the wilderness ideal, but instead as vermin or a trophy on Montana state or national forest land. Depending on the location, those 100 yards could be the distance for a park visitor with a camera or a hunter with a rifle. Once the wolf moves from being the face of wilderness to becoming distasteful and unwanted vermin, human relations with the animal shift to reinforce a persistent and long-lasting anti-wolf reality, a reality that challenges the very meaning of coexistence.

On Indian reservations throughout the Intermountain West there have been ongoing struggles to return the American bison, or buffalo as they are called by Native Americans, to the land. Many ranchers don’t want bison to roam free and wild, so the remnants of the millions of bison that historically grazed the plains are contained within a few national and state parks from Montana to Florida. In recent years, though, for reservations like Wind River Indian Reservation in Wyoming and the Flathead Indian Reservation in Montana, efforts at returning buffalo to their native lands have met with some success. The challenge for these reintroductions is the conflicting ideas surrounding where bison belong. According to Jason Baldes, a member of the Eastern Shoshone Tribe on the Wind River Reservation where wild bison have been returned, “Cows are invasive species. Just don’t call them that, because ‘cattle is king’ in Wyoming.” The metaphor “cattle is king” relegates those species that complete with cattle for grass or water as subservient to the needs of cattle and not welcome on the invented geographical space of cattle country. Buffalo that escape their fenced domains can be shot because in the land where cattle are king, the bison is little more than an intruder. On the Fort Peck Reservation in eastern Montana and the landscape surrounding it, additional efforts are underway to return wild bison. That effort has stirred up a Save the Cowboy campaign because to many ranchers, cowboy heritage is not compatible with wild bison. The positive metaphors and stories about cattle and cowboys have built an understanding that even though cattle are the invasive species, they belong on the landscape, while bison, a critical native species to plains ecosystems, do not.

In eastern Montana at the entrance to a ranch there is the ranch name (Square Butte Grazing) hanging from a wooden frame and a Save the Cowboy campaign sign below that shows two cowboys with the words “Save the Cowboy: Stop American Prairie Preserve.” There is also a small orange sign that says “No Shooting Area.”
Credit: Barbara Jones 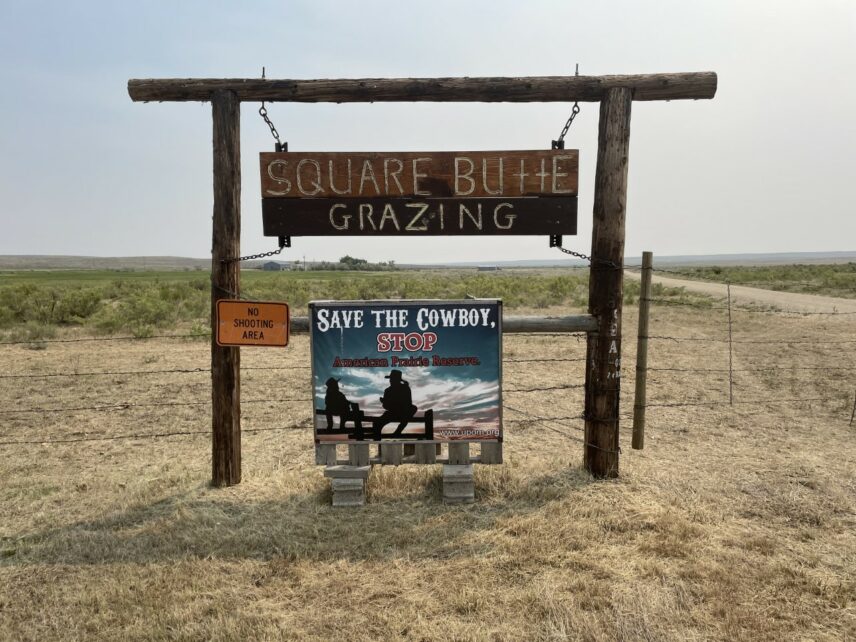 The current campaign in Montana, Idaho, and Wyoming to have the grizzly bear removed from the endangered species list is another example of how we limit wildlife access to human space by forging imaginary boundaries. The increasing number of grizzlies that are appearing in places they “don’t belong” has given the grizzly-as-a-dangerous-beast crowd an in for managing the grizzly bear as a game animal. Grizzlies in our trash, our yards, or on our streets suggest that the bears have failed to stay on their side of the imagined border. Although the grizzly bear occupies only six percent of its former range, the governor of Montana believes that the current high number of grizzly bears negatively impacts communities, farmers and ranchers, and recreationists, while their endangered status limits the state’s options when it comes to dealing with habituated or “conflict bears.” Typically, once a grizzly becomes a conflict bear, it can only be relocated to previously established recovery zones or killed by government agency officials. Grizzly bear expansion into ideal habitat outside a recovery zone is not an option because, like wild bison that leave their allocated spaces, the grizzly bear can also be shot and killed. The language of a new proposed bill in Montana makes the enforcement of these imaginary borders more likely because the bill allows “a person to shoot a grizzly bear that is threatening livestock.” This proposed bill provokes the question, Are grizzlies threatening simply because they are so-called dangerous beasts and that merely by entering our invented grizzly-free geography their presence constitutes a threat? If not, how does that bill allow grizzly bears to expand outside their current range where their presence is concentrated in high-population areas near and around the state’s national parks? Since current grizzly bear habitat is tightly controlled and highly managed, the dangerous beast narrative makes it much easier to avoid efforts at coexistence, but instead to redefine a wild grizzly bear as a conflict bear with all the consequences to a grizzly that label allows.

These examples demonstrate how, for coexistence to become a reality for us and nature, new stories and metaphors must be told. For wildlife to engage in the business of living, species need to be able to move across the landscape. Real boundaries like fences, highways, dams, and urban sprawl already make that movement difficult, but if a coyote was never called a “nuisance” or bison did not have to compete with the idea that “cattle is king,” those imagined human-nature boundaries would be much less rigid and far more welcoming to species other than our own. This makes critical sense today when we know that our well-being is tied to nature’s well-being. By rewriting narratives and metaphors that devalue wild nature’s contributions to our mutual well-being, the business of living can become much easier for us all.

Barbara Jones is a professor of anthropology at Brookdale Community College. She is also the author of Wild Capital: Nature’s Economic and Ecological Wealth. Her current research focuses on reimagining the narratives for nature’s inconvenient species.