How do craft breweries in Japan and the United States weather unforeseen crises?

Summer 2012, Iwate, Japan. Among the skeletal foundations of former residences and businesses on Miyako City’s coastline was a saké (rice wine) brewery, the lone establishment left standing following the wave. A desiccated brown sakabayashi (a bundle of cedar needles) hung above the main entrance announcing the end of the brewing cycle. July marked the brewery’s first vintage since the disaster. A pyramid of professionally labeled amber bottles stood on a makeshift display fashioned from a shipping crate.

The owners, a young couple smartly dressed in business casual, accented by scuffed rubber boots, waited outside for the tour group. We were a group of tourists and mourners from farther inland on our way to a memorial service up the coast. Our stop was part promotion for the recovering business district, part uplifting brace against the somber undertaking ahead. The owners escorted us through their small brewhouse. They pointed out the gray watermark etched nearly two stories up on the brick wall, close to the vaulted ceiling, indicating the sea’s temporary apex. They showed off a new stainless steel kettle, juxtaposed with the former copper kettle, which had been crumpled nearly flat between the force of the water and the wall against which it now rested. Stepping outside, the owners donned black happi jackets (loose-fitting coats traditionally worn by laborers) emblazoned with the brewery’s seal and began handing out liberal samples in paper cups. Encouraged by alcohol, the quiet reverence of the tour steadily gave way to exaggerated compliments and conversation punctuated with hearty laughter. Soon, guests began opening their pocketbooks, buying bottles to take home as souvenirs. When it was time to part, we bowed and expressed our gratitude for the hospitality and delicious saké. Some shook hands, promising to return with family and friends. Others intoned “gambatte”—hang in there, keep at it, do your best.

Reflecting on this moment, I am impressed by the intricate weave of grief and hope, guilt and ambition that underscored that tour. To the tourists, the brewery stood as an icon of local, regional, even Japanese hardiness in the face of extreme hardship. The Japanese spirit as spirit. For the owners, the neatly arranged bottles and the money exchanging hands set against the backdrop of the ruined district served as tangible indicators of personal recovery, of possibility for the future. They were not out of the hazard—in a sense, no small business ever is—but revenue and good publicity gave means to move. To the customers, buying a bottle of saké was the least they could do, a small effort toward a crisis in which they were—and largely still were—powerless. For the brewers, whose skills could not be washed away, artisanship was empowerment, crafting a taste of hope from a landscape saturated in pain and loss.

Nearly a decade removed, the struggle of the Miyako brewery has taken on new relevance professionally and personally for me as both an anthropologist and artisan. I began researching Japan’s craft brewing scene in 2015; the United States was enjoying its third craft beer boom, the previous two having sputtered out due to a combination of technical mishandling and waning consumer patience (Grossman 2013). Craft beer, variously called jibīru or kurafuto bīru, was blossoming in Japan, due in part due to its American popularity, the growing availability of imported malted grain and hops (domestic sources of these key ingredients continue to be monopolized by macro breweries in Japan), and the increasing affordability of brewing equipment specially designed for small-scale operations.

The image shows a stone floor walkway lined on either side by a row of stainless steel fermentation tanks. Blue hoses hang limply off a tank on the left side, and two buckets stand upturned at the photograph’s top edge. The brewhouse is dimly lit, the atmosphere calm and still.
Credit: Aaron Delgaty 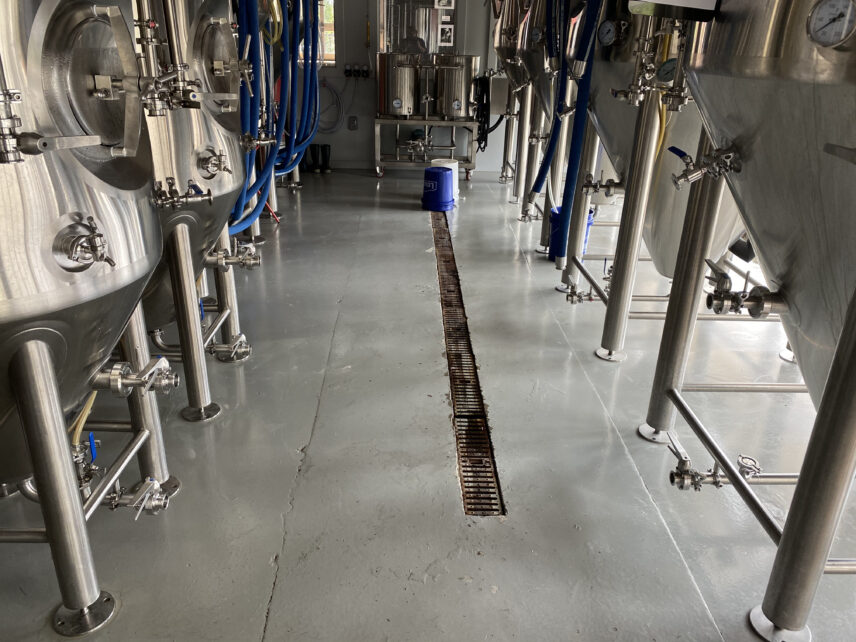 More critically for my collaborators, brewers and business owners hanging their shingles in metropolitan Tokyo, craft beer represented a professional haven for university-educated young Japanese disenchanted with the status quo. In a sense, the Japanese craft beer community was born of crisis: the breakdown of lifelong employment, the grinding competitiveness of coveted and increasingly scarce stable government or industry jobs, and the mounting existential dissatisfaction for traditional corporate culture have inspired a growing number of students and early-career professionals to pursue nontraditional employment in a host of cottage industries (Allison 2013). In this way, the liberating allure of Japanese craft remarkably parallels its American counterpart (Ocejo 2017).

The escape plan has not gone seamlessly. Japan’s craft industry has weathered its share of crises in its short tenure: laws and regulations that strongly favor large-scale producers, antagonism from macro breweries, the added costs of importing ingredients and specialty equipment, and customer apprehension to try untested brands. Even so, many of my collaborators claimed to take inspiration from their constraints. Some have transmuted cramped urban real estate into cozy brewpubs, the tight quarters accentuating the communal aesthetic. Others have substituted less accessible mainstream ingredients for accessible, yet unconventional adjuncts, creating brews that evoke a terroir of adaptability. (I know a place with a wonderful curry beer.) Many have compensated for what they lack in space and resources by forging deep bonds with local institutions and residents, patron communities hardened against consumer capriciousness.

Through determination and creative compromise, Tokyo brewers have carved out a comfortable niche catering to similarly adventurous souls dissatisfied with ubiquitous super-dry drafts. But even the most optimistic could not shake an anxiety common to craft communities in Japan and the United States alike. Operating within the natural uncertainty of small business and the volatile precedent set by their American forebears, Japanese brewers grapple with an underlying fear that the craft bubble will suddenly burst, that operational costs will become untenable, that customers will move on to the next fad. When, not if, that time comes, Japan’s lost generation will lose their refuge in brewing, and be left adrift once again.

These fears seemed to materialize in the spring of 2020. I was working professionally as a brewer in North Carolina while I wrapped up my PhD. The day before my defense, I was furloughed as a result of the governor’s March 14th shutdown order, along with everyone else at my brewery and so many others across the state. In the weeks that followed I saw an increasing number of breweries in Japan posting similar notices to social media: updated business hours, information about take-out and to-go options, assurances that they and their communities would hang in there and keep doing their best. Gambatte.

This was a delicate ethnographic moment. As an anthropologist, I wanted to know how the Japanese craft scene was faring, and if it was coping differently than its American counterpart. Yet as a brewer, I knew how insensitive this line on inquiry would be to colleagues presently scrambling to develop to-go protocols, find alternate employment for their staff, and coax cans from backordered suppliers. I tested the waters, texting a brewer friend in North Carolina a couple weeks in to see how he was doing. “How do you think?” A curt reply but the circumstances warranted curtness. In time, I developed a more detailed picture of the situation facing Carolinian brewers through private guild crisis meetings and virtual happy hours. Most had furloughed staff. Some were brewing and running take-out services alone. Some weren’t brewing at all. Brewers were working for half or quarter pay, volunteering at times, trying to keep their businesses afloat so there would be a place to come back to when the vaccine finally landed. Some breweries had commissioned expansions prior to the shutdown and were now sitting in swanky taprooms or massive brewhouses with no way to pay down the loans. Government aid was slow coming and impenetrable, nonprofit grants hotly competitive. My interlocutors in Japan faced similar austerities, with trendy breweries in Tokyo and Okinawa facing the added strain of decreased domestic and international tourism. A number of Japanese and American brewers and brewery owners considered career changes: real estate, accounting, joining the military, moving back to the countryside, anything more stable than brewing.

The image shows a close-up view of a beer mash, a combination of malted barley and wheat steeped in water in order to create the foundation of a beer. The mash is a warm light brown with black accents. Quartered donuts added to the mash stand in contrast to the grainy malt and light brown foam. Stainless-steel elements of the brewing vessel frame the top border.
Credit: Aaron Delgaty 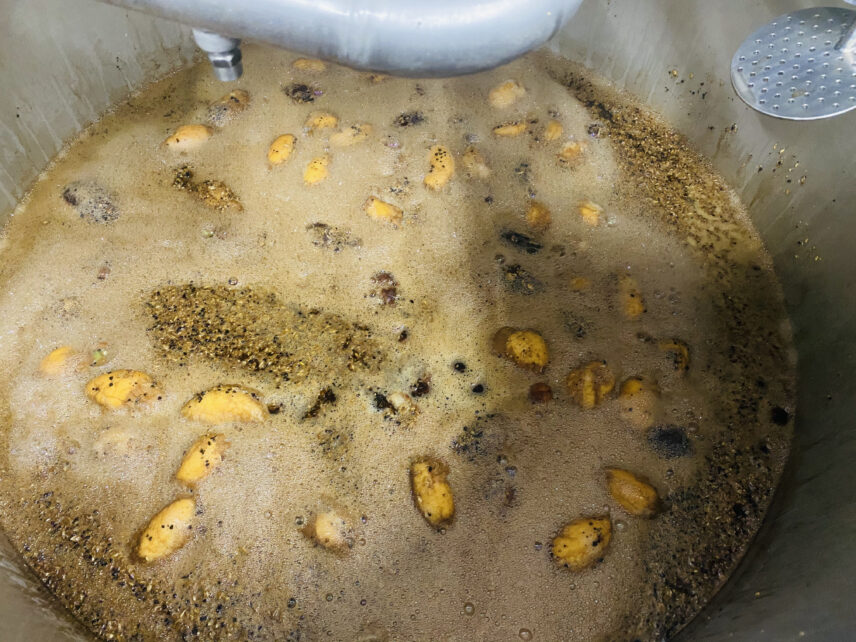 At the outset, a brewery manager in North Carolina had bullishly claimed, “A two-week vacation and we’ll be back in business by April.” COVID-19 proved to be a slower-burning crisis. But time’s passage inured my American and Japanese collaborators to the precariousness. They more readily swapped stories of hardships, strategies for tackling new anxieties, and wry jokes poking fun at their and others’ misfortunes. A Japanese friend, the brewer of the aforementioned curry beer, reached out. He noted that small businesses were still struggling well into September, and likely would continue. His brewery had closed its second location before it even opened. He had truncated his tap lineup to four of their best sellers. “It’s difficult,” he wrote, “but I’m still somehow doing what I can.” Then, taking an optimistic tack, he signed off with, “When I can travel from Japan, I definitely want to come and play!”

My friend’s resolve to somehow do what he could suggests a slowly swelling undercurrent of hope beneath the present precariousness. This hope is not baseless. Japanese and American brewers alike have endured over a year of operating in crisis. With restrictions lifting, multiple vaccines rolling out, and more customers walking through the doors, it feels like the worst is behind them even as they struggle to stay afloat. This hope manifests in the moments where a battered artisan looks back and realizes they’ve come through the storm, a little bent, a little broken, but still brewing.

Working with brewers in a pandemic recalls the Miyako brewery on that hot July afternoon. I ask a question now that I asked then: What does it mean to be resilient? What does it mean to roll with a crisis, take it into you, and come out a functioning system on the other side? The Miyako brewers stood on that other side, the scars of the wave etched into their brewery and their hearts, disaster artisans crafting a taste of hope in amber bottles. I do not know what tastes American and Japanese brewers will create when the current crisis recedes, but I would offer that maybe the taste of resilience is simply to continue creating a taste at all.

Aaron Delgaty is a teaching assistant professor in anthropology at UNC Chapel Hill. He received his PhD in anthropology from UNC Chapel Hill in 2020. His research explores craft brewing, distilling, and drinking culture as a means to navigate crisis. He is currently examining the ongoing impact of the COVID-19 pandemic on breweries in Japan and the United States Outside of teaching and research, Aaron also works as a professional brewer.