A conversation about Julie McBrien’s book From Belonging to Belief: Modern Secularisms and the Construction of Religion in Kyrgyzstan (2017). 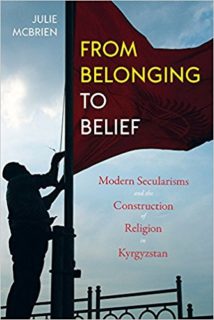 Julie McBrien: Well, I never set out to take on Grace Davie! It happened by accident. I thought long and hard about the title of the book and finally came up with one that satisfied me. As I began to work references to the title into an early draft of the introduction, it hit me that the title came close to her famous work; I couldn’t keep the title without discussing her “believing without belonging.” Once I added Davie, I had to include the other sociologists of religion. I had not intended to take on such a large and impressive body of work, but in the end I was pleased I did. It gave me a chance to get back to scholars such as Jose Casanova, who shaped my early thinking. It also finally gave me the chance to engage a dissatisfaction I had had with their work, namely that it too often assumed and then deployed for analysis definitions of religion rooted in western Euro-American, primarily protestant-cum-secular, traditions.

In my mind, the title of my book refers more to the kind of public religion allowed by two different types of secularism than it does to the Muslims in Kyrgyzstan themselves. I wanted to argue, with Talal Asad, about the kind of public religion that is sanctioned, shaped, and monitored by the state in its political project of secularism. I get at this by looking at how religion is publicly practiced and understood, but I am not sure I would ever want to classify Muslims in contemporary Kyrgyzstan as those who “believe” compared to ones in the Soviet past who “belonged.” In both the Soviet and post-Soviet period there were a multiplicity of ways of being a Muslim that included both of these elements (believing and belonging), in addition to others and more experiential modes. That is one of the distinctions I draw between how I use the words “belonging” and “belief” and what Davie does with them. Davie really uses the terms to talk about religious practitioners; I use them to talk about broad definitions of publicly allowable religion in two different secular states.

CW: I’ve argued elsewhere that one of the main results of the Soviet atheist policies and anti-religious campaigns was the production of ignorance of formal religious knowledge. But what can you tell us about how such policies affected religious practice among Muslims in Central Asia?

JM: Certainly, there was a dramatic decrease in the number of people who could receive religious training or who could openly become religious leaders. There was also a dearth of religious texts and scholarship. And indeed, a lot of basic religious knowledge was lost among the majority of the population, one example being how to pray. The effect was dramatic. So, in that way yes, there was a huge loss in the area that you might describe as formal religion. Yet, many life cycle rituals and rituals related to the home and family, for example, remained, even though some might exclude and classify them as “not formal,” “folk practices,” “everyday practices,” or “unorthodox.” But these are elements of Muslim religious life that exist all around the world and have existed in Central Asia for a very long time. Some practices are sanctioned by local religious leaders who argue that they are allowed by the Hanafi legal school. Certainly, scholars and lay folk, past and present, debate the propriety of these practices and whether they are permitted or whether they might be innovation. But I am not comfortable labeling certain aspects of Muslim religious life as “formal” or “informal,” partly because of my own observations but also because of the way these terms hark back to two debates in the literature: One is the debate on the religious leadership in Central Asia during the Soviet period. The other is the debate in the anthropology of Islam on “great” and “little” traditions.

CW: You note the unique aspects of the debate over what Islam and Muslimness mean in Kyrgyzstan. What are the factors that shape these debates?

JM: When I first started fieldwork, I was confronted by how often Muslim practice was constrained by discourses and practices of anti-terrorism. These discourses were everywhere, and I observed up close how Muslims in town were constrained in their practice of Islam for fear of gossip; of sanction by family, friends, or employers; or, in extreme cases, of the reaction of state authorities. At the same time, I was also reading a body of literature on Islam and the secular state which predisposed me to see the way the state limits and monitors religion. So at the outset, I was inclined to see the control of religion by the state. But I also discussed my fieldwork with other members of the research team (Irene Hilgers, Pawel Jessa, Kristzina Kehl-Bodrogi, Manja Stephan, and Johan Rasanayagam) who worked in Uzbekistan, Kazakhstan, and Tajikistan. They marveled over what was possible in Kyrgyzstan. It was through discussions with my teammates that I realized how much space there really was in Kyrgyzstan. I started to relativize what I was observing. The Kyrgyz state rarely imprisoned anyone on charges of terrorism and their attempts at control were soft. They promoted ideas of proper Kyrgyz Muslimness, for example. Uzbekistan, on the other hand, just 30 kilometers from my field site, was still firmly under the control of Islam Karimov, a dictator who forcibly and sometimes violently controlled religion and who used accusations of terrorism as a means to harass, jail, torture, and murder political opponents. It was only one year after my fieldwork that the Uzbek state massacred hundreds of peaceful protesters in Andijan, including women and children, all in the name of controlling so-called Islamic extremism. It was comparisons like this that drove me to classify Kyrgyzstan as exceptional in the region. There really was, at that time, an unparalleled space for exploring, debating, and practicing Islam. That largely remains true today as the governments of Uzbekistan, Kazakhstan, and Tajikistan continue to control religion much more firmly. Moreover, increased contact with Muslims around the world means that the diversity of religious ideas and practices present in Kyrgyzstan today is stunning, further facilitating discussion.

Catherine Wanner is professor of history and anthropology at Penn State University.

Julie McBrien is assistant professor of anthropology at the University of Amsterdam.

Masks at the Museum