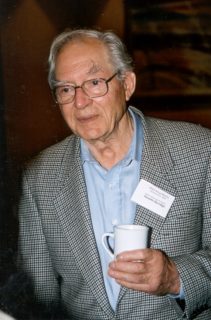 Kenelm Burridge, a scholar of immense scope and a legendary teacher at the University of British Columbia (UBC), passed away at the age of 96 on May 21, 2019, in North Vancouver, Canada.

Born in Malta, Burridge spent his early childhood in India before attending school in England. He enlisted in the Royal Navy in 1939. Captured after the HMS Splendid was sunk near Naples, he escaped and returned to the navy, ending his military career with the rank of Lieutenant. After receiving his BA and MA degrees in anthropology at the University of Oxford, he attended the newly established Australian National University, receiving the first PhD degree awarded by that university in 1954. Upon graduation, Burridge served as a research officer in Malaysia, chair of the anthropology program at the University of Bagdad, and then lecturer in anthropology at Oxford before taking up a professorship at UBC in 1968. He retired in 1988, remaining in the Vancouver area with his wife Anna until his death this year.

Burridge pursued an unconventional scholarly path, reflecting a deep and abiding interest in the intersections of morality, culture, and spiritual transformation at a time when the discipline was resolutely focused on functionalist studies of social structure. As other postwar anthropologists rushed into the New Guinea highlands to study recently contacted populations, Burridge (along with his close friend, Peter Lawrence) elected to work on the Rai coast of the Madang district, which had long been a hotbed for millenarian movements. His field research among the Tangu and Manan Island people laid the foundation for three major works: Mambu: A Melanesian Millennium (1960), a popular ethnography which remains in print; New Heaven, New Earth (1969), a comparative study of millenarian movements; and his magnum opus, Tangu Traditions (1969), a comprehensive analysis of Tangu mythology in its relationship to the experience of social change.

Burridge’s writings frequently anticipated later trends in anthropology, not least in Encountering Aborigines (1973) in which he demonstrates that ethnographic analyses of Australian Indigenous people must be understood in the context of European intellectual and moral traditions of imagining the “Other.” A devout if critical Catholic, Burridge’s last two books explored the intersections between culture, individuality, and Christianity. Someone, No One: An Essay on Individuality (1979) is a particularly ambitious work that attempts to discern the roots of Western individualism in Christian transformations of a universal human capacity for individuality. Burridge’s final book, In the Way: A Study of Christian Missionary Endeavours (1991) provides empirical heft to the earlier work through a close comparative study of individual evangelists. These latter works include provocative reflections on the “metaculture” of Christianity in general, anticipating the now burgeoning field of the anthropology of Christianity.

Burridge was a superb teacher with a unique ability to deliver complex theoretical points with a telling anecdote. He was enormously generous with his time and knowledge both with undergraduate and graduate students. His rich and provocative writings continue to be discovered and to inspire new generations of scholars. (John Barker)