Leila Monaghan, beloved member of the cultural and linguistic anthropology communities, died on February 23, 2022, of complications due to cancer.

Leila’s teaching touched thousands of students. From 2016 to 2021, she served as senior lecturer at Northern Arizona University. However, in her 30 years of leading classes, she taught at no fewer than 10 universities, often moving every year or, later, commuting between her university and the home she and her husband, Bob McGovern, created in Laramie, Wyoming. Like the majority of today’s university faculty in the United States, she worked as a visiting professor, adjunct, or lecturer. Like most of us, she held other jobs—linguistics software design, teaching second grade in Philadelphia. Often, she taught her college students only once, so she made it count. One student, Alexa Baczak, wrote, “I was only in one class with Leila Monaghan, but it was one of the most influential I had in college. Leila was just an incredible person who adored what she did and that was clear in every class. What she taught was beyond books and lectures. It was how to listen and respect others regardless of dialect, language, or cultural barrier.”

Leila was boundlessly energetic, enthusiastic, interested and interesting. Despite heavy course loads and frequent job shifts, she coauthored or edited five books as well as dozens of book chapters, journal articles, encyclopedia articles, and reviews, including in Annual Review of Anthropology. Her work in deaf and disability studies inspired a session at the 2022 Society for Linguistic Anthropology meeting, in which organizers noted that with her 1996 University of California, Los Angeles dissertation on a New Zealand deaf community, Leila “provided some of linguistic anthropology’s first ethnographic studies of how deaf signers together build new forms of language and sociality.”

Leila became an anthropologist when, as a preschooler, her parents moved their family from England to New York and she experienced Halloween. She was dumbfounded by all these people wearing costumes and asking for candy. But she quickly got down to business with her first participant observation assignment. Her training progressed from there, and her interests ranged widely. Leila also held a master’s degree in history (University of Wyoming) and one in education (Columbia Teacher’s College). She published on Native American women during the Battle of Little Big Horn and created a phonics guide for children. She was a scholar-entrepreneur, launching Elm Academic Press.

She started building her anthropology community in graduate school. She wrote for the Anthropology Newsletter because she thought it was important and because she could write. She had been taught by author Frank McCourt at Stuyvesant High School and then others at Bryn Mawr College. She used the still-new internet to start the first-ever linguistic anthropology email list, which exists to this day. She organized linguistic anthropology dinners at AAA Annual Meetings. Once, when asked why, Leila responded, “I just wanted to talk to people.” And she talked to everybody. Many newcomers, clinging to a wall at a crowded reception, were welcomed to the anthropology fold by Leila’s signature smile and warm greeting. Linguist Katie Carmichael remembers, “It made me feel so welcome, like I belonged.” Leila’s special gift was to make us all feel like we belonged.

Memorials were held in Charlottesville, Virginia, and in Brooklyn, New York, in April 2022. Memorials and bequests should be sent to the Flagstaff Family Food Center  or the Bryn Mawr College Fund.

A woman stands outdoors, smiling broadly with numerous trees behind her. She is wearing glasses, a sweater, a necklace, and a cap that has the word “anthropology” emblazoned on it. 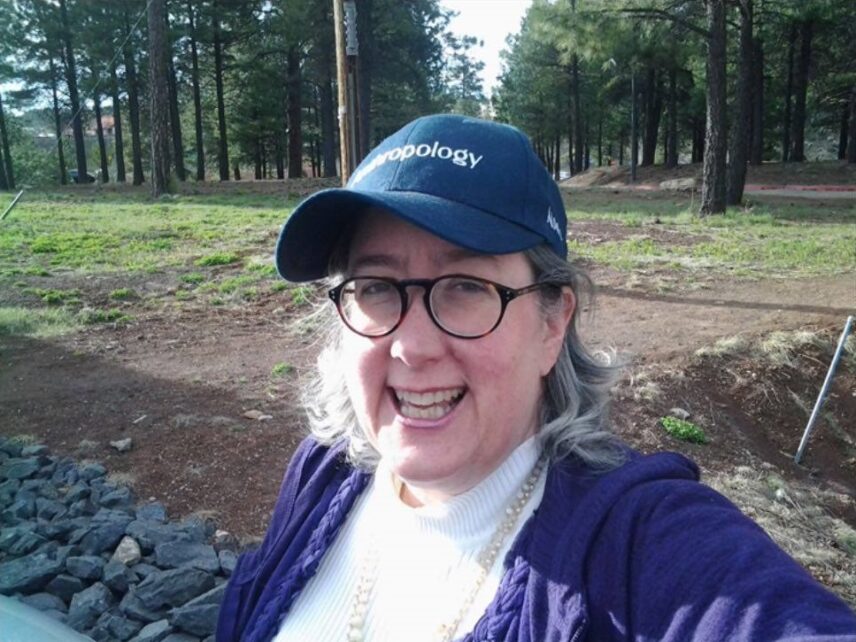