Lunar Imperialism (And How to Avoid It)

The year is 1902. Our setting is a Jules Verne-inspired film studio on the outskirts of Paris. Illusionist and director Georges Méliès is about to produce one of the most influential films ever made—Le voyage dans la lune (A Trip to the Moon). Recognized as a “carnivalesque” satire that poked fun at nineteenth century science and boasted strong anti-imperialist vibes, the silent, 12-minute film made a lasting impression on the history of cinema and changed global perceptions on the accessibility of the moon. What was once extreme and unreachable was now a boundary that could be overcome and conquered. 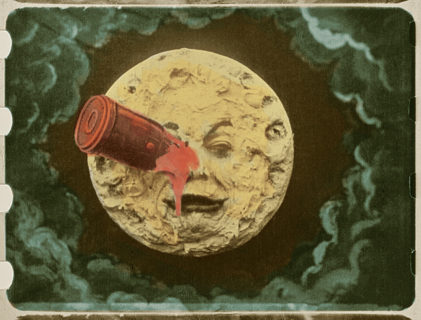 Although the prospect of lunar colonization posed an impressive achievement, Méliès portrayed a lunar colonization (complete with a war against the extraterrestrial natives) reminiscent of the violent European colonization of the Americas. As the NASA 2020 budget increases funding for lunar programs by 82 percent and commercial companies partner with the Commercial Lunar Payload Services program, returning man to the moon—and furthermore, lunar colonization—appear less science fiction and more science reality. How can humankind peacefully colonize the moon, heeding lessons learned from Méliès’s fiction and the violence of our own terrestrial colonialisms? How can tensions among peoples of Earth be managed as competitive lunar economic development begins in earnest?

One of the most complex aspects of expanding human civilization into and out of our solar system is not technological advancement or funding, but maintaining a sociocultural and economic balance between the moon and the earth and among the handful of cultures attempting lunar missions. As I mentioned in The Elysium Effect (Mandel 2017), presumably the first people in space will be those with access to the economic resources necessary to pay for a ticket. Influenced heavily by largely westernized cultures, the early days of twenty-first century lunar exploration will probably be subject to settler-colonial ideologies and competitive reactions that could result in systematic and capitalistic violence similar to what Méliès portrayed throughout Le voyage dans la lune.

The commercial space company Moon Express promotes a mission to expand Earth’s social and economic spheres to the moon in an effort to democratize space, support a new space renaissance, and utilize lunar resources to such an extent that they hope to one day refer to it as Earth’s eighth continent. However, if we want to reach a point where we can consider the moon an eighth continent—a modular addition to Spaceship Earth—we will have to do so in collaboration and not competition with our earthly neighbors. Sure, competition spurs innovation, take the Ansari X Prize for example, but such competition might ultimately result in a lunar frontier civilization that is ultimately divided.

Although it may be nice to imagine a blend of cultures cooperating as one unit across the lunar surface, this perspective underestimates the power and value of distinctive cultural differences, diversity, and political divisions. Already, I have witnessed during hearings on issues relating to outer space in the US Senate and House of Representatives, rising tensions among China, Russia, and the United States overshadow proceedings. Concerns regarding the security of the United States, the creation of a space force, competition for extraterrestrial resources, and maintaining the lead in the commercial space race are at the forefront of political debates, and echo the Cold War-influenced space race which began six decades after Méliès’s production.

From my experiences as an anthropologist working in the commercial space industry, I believe tensions can be managed and space colonized peacefully, as long as access to space continues to be democratized. I don’t just mean transition to a democratic political regime, but rather giving all earthlings equal access to outer space and all its splendors. The next step may be a progressive (and weightless) march guided by the entrepreneurial visions of the leading space players of this decade. Companies like Worldview, Space for Humanity, Blue Origin, and Virgin Galactic hope to make space more economically and physically available to all—not just the wealthy elite. While space tourism may seem like a moonshot from lunar colonization, it’s a step in the right direction.

Fast forward to the summer of 1969, to Satio Tranquillitatis, lunar coordinates 0041’15” N, 23°26’00” E, better known as Tranquility Base. Neil Armstrong is about to take “one small step for [a] man, one giant leap for mankind.” This moment will never be reflected on as “carnivalesque” and is far removed from political satire (although political it certainly was). In the same way Le Voyage dans la lune pushed turn-of-the-century French society to consider the moon as a potential realm of human interaction, the moon landing acted as arguably the most transformative moment in human history. With it, we not only realized that humans could interact with other planetary bodies, but understood that what was once considered extreme—an unreachable boundary—was now attainable, meetable, and open for development (see Olson, 2010). But with the “open for business” sign patriotically nailed into Tranquility Base in 1969 and current growing interest in economic lunar expansion, come new boundaries to be watchful of and a colonial history worth reflecting on.

Savannah Mandel works at the American Institute of Physics as a science writer. She recently earned an MSc in social anthropology from University College London, having studied the anthropology of human space exploration, for which she conducted fieldwork at Spaceport America in 2018. Her written works are inspired by technoscapes, material culture, and a deep love of all things science fiction.