Residents hold their own experiences of growing up in Pisté and Chichén Itzá in tension with official narratives.

The image of the Pyramid of Kukulkan places the viewer directly in front of it, perhaps evoking a desire to visit Chichén Itzá in person. Although visits to the site have declined in recent years, and especially during the initial outbreak of the COVID-19 pandemic in 2020, official government statistics indicate seventy-nine thousand Mexican national visitors and almost fifty-six thousand foreign tourists have visited Chichén Itzá in 2021 so far. The pre-Hispanic Maya city continues to draw multitudes of tourists, but the focus of my ethnographic research is on the memories, lived experiences, and conceptions of identity of the Maya residents of Pisté, the town located closest to Chichén Itzá. Through conversations with Pistéños (people from Pisté), this research is aimed at better understanding how Pistéños strategically shape and reshape their life histories in ways that allow them to participate in the tourism economy to varying degrees. What are the factors that can determine greater or lesser economic survival in Pisté?

State nationalist narratives about Chichén Itzá and of the Maya people who live in Pisté, play a significant role in configuring the contemporary subjectivities of its inhabitants. Internationally, UNESCO’s World Heritage Centre and its various advisory bodies craft the conventions for safeguarding world heritage. Member states are responsible for maintaining compliance with international conventions. This means that a site of world heritage must be developed along with ancillary tourism industries in order to remain in compliance with international standards or risk losing world heritage status.

The development of Chichén Itzá into a site of world heritage, organized in a way that catered to tourism, began in the mid-1980s, within many Pistéños’ lifetimes. They remembered the time when access to the Maya city was free and open, like going to the public park. They held their own experiences of growing up in Pisté and Chichén Itzá in tension with official narratives that reified a new history of the place in which they had lived and worked for most, if not all, of their lives.

A stone temple dominates the landscape, with trimmed green grass in the foreground and a brilliant blue sky with white clouds in the background.
Credit: Mario La Pergola 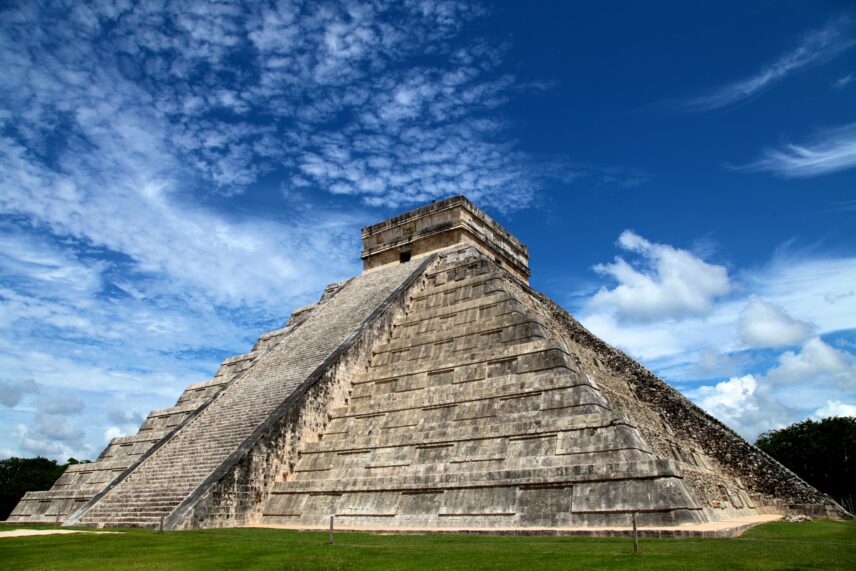 This tension between personal experience and official narratives of the site is exemplified by my conversation with Cynthia, a government school teacher in her early forties living in Pisté. She described her experiences growing up near Chichén Itzá throughout her life, saying,

C: When we were kids Chichén was not how it is now. They used to let us climb up the pyramid and they were keeping an eye on us by the cenote, because of the altitude, so that we wouldn’t go too high. Perhaps we did not have that notion of knowing that Chichén was really a wonder. It was normal, like going to the park. That’s how it was, that’s how I grew up. We didn’t have much knowledge. Later I studied outside and I began to find out. I was reading. I had the opportunity to meet archaeologists and listen to the narrations. That’s how I began to understand.

SV: That for archaeologists this was a place that…

C: That was valuable.

Two things stood out to me in this short excerpt of our conversation. First, the official historical narratives of the Maya of Yucatán and Chichén Itzá are often based on the epistemological authority of Euro-American anthropologists and archaeologists. Second, Cynthia recognized that her lived experiences and memories of the site were re-configured by the process of transforming Chichén Itzá into the “heritage of the world.”

There is another narrative that comes up often in conversations with Pistéños who make a consequential portion of their income from tourism to the site, one of entrepreneurship and personal responsibility that is tied-in to their indigenous Maya identity. Most Pistéños work several gigs in or related to tourism. Their income is highly contingent upon factors out of their control such as strong hurricanes, global economic recessions, and the draw of events like the 2014 FIFA World Cup in Rio de Janeiro. Pistéños pride themselves on how well they prepare for unpredictable hits to their income. Most striking, however, is that Pistéños often link these effective entrepreneurial skills, as well as maneuvering between side hustles, to the pride they have in their identity as direct descendants of the Maya people who built Chichén Itzá.

The following two excerpts are from conversations with young men whose statements imply a connection between entrepreneurship and indigeneity. In contrast to Cynthia’s account, which highlights the tension between personal experience and official narratives, Brandon points to the ways in which development in official government narratives intertwine with ethnic identity and perhaps class status and gender as well.

Brandon is thirty-three years old and works as an official tour guide in Chichén Itzá. Brandon describes the Pisté of his childhood as not “so modern as it is now.” He attributes the changes in Pisté to the influence of tourism. The landscape he remembers from his childhood was of a town with very few people out in the streets. No one owned a car and very few people had bicycles. There were not so many businesses and most people who lived on the main street that lead to Chichén lived in houses made of wood and palm leaves. He recalled being in awe of seeing a tourist as very few of them visited Chichén and Pisté at that time. When Brandon grew into adolescence and young adulthood in the mid-to-late 1990s, Chichén Itzá had already been configured into a global tourist attraction.

The site was granted UNESCO World Heritage designation in 1987 when a state and national infrastructure project for the site was also completed. Brandon’s memories of important times and places in Pisté and Chichén were now marked by milestones in his journey as an entrepreneur. He began selling artisan crafts outside popular tourist restaurants. Later, he worked the reception desk at the Hotel Mayaland while he was studying to become a teacher. One and a half years before he would complete his studies, Brandon quit so he could participate in a year-long tour guide training program. Graduating in 2007, Brandon entered the official tour guide business the same year in which a private organization based in Zurich, Switzerland, was wrapping up its global campaign to determine the “New 7 Wonders of the World.”

Brandon realized the numbers he saw at the beginning of his career were out of the ordinary for his older colleagues, who told him how much the “world wonder” title increased visits by foreigners. Brandon then related how he began to think about the indirect influences on the volume of visitors and how it would affect his income each season. As his income from guiding tours is contingent upon various factors out of his control, Brandon began to save a good part of his income from a heavy tourist year and invest it in buying land and materials to build two convenience store locations. Brandon spoke about his satisfaction at his entrepreneurial choices: “I told my wife, ‘we are going to enjoy life.’ So that’s been my goal, investing money so I can shape my family’s future.” At the same time, he made a distinction between colleagues he considers like-minded—who understand the transitory nature of the tour guide business and decide to save and invest their money in buying property and establishing private businesses—and colleagues who spend their earnings on things that will not turn a profit:

Obviously, creating a stable life depends on whether each person takes advantage of tourism. I have co-workers who started working at the same time as me and they haven’t done anything other than party. It’s just another way of thinking.

His words suggest that the tourist industry creates and reifies ethnic and class distinctions between Indigenous Maya who achieve economic success and those who struggle to assimilate to the idealized subjectivity of an entrepreneur of heritage and culture. His reflections, alongside Cynthia’s, raise numerous questions about how Pisténos negotiate their racial, ethnic, and class subjectivities in relation to Chichén Itzá, its status as a UNESCO World Heritage Site, and its fluctuating tourist economy. Such questions remain vital as the COVID pandemic continues to rage, with particularly devastating effects in Latin America, where Indigenous people are disproportionately affected.

Sofia Vicente-Vidal grew up in San Ysidro and Chula Vista, California. She earned a BA in anthropology from the University of Colorado, Boulder in 2014 and a master’s from the University of Oregon in 2019. Her doctoral research explores questions at the intersections of nationalism, indigenous identity, and tourism in the lives of people who reside in and near sites of world heritage in Mexico and Latin America. She is the 2019 recipient of the ALLA Graduate Student Paper Prize.