By Michelle A. Rodrigues

Play is a quintessential part of primate life. It teaches social skills, manages uncertainty, and prepares us to meet fresh challenges.

Last year, I adopted an energetic one-year-old dog. Benny came from me from a rescue organization in Puerto Rico and went from being a street dog to a foster dog in a home with multiple dogs to being an only dog living with one human in a house in Wisconsin. One of the things Benny struggled with was adjusting to life without the ever-present company of canine playmates. Benny loves to play with other dogs, and he would eagerly drag me to meet every dog he saw. But in his eagerness, he was not very cautious in discerning their readiness to play. He would run up and jump on other dogs, whether big, small, young, or old, jumping on their heads and swatting at their faces with a friendly paw. It terrified me, as I knew that some dogs would respond aggressively to this young whippersnapper.

Benny reminded me of a young spider monkey I studied over a decade ago, in the swampy rainforests of northeastern Costa Rica. Tristan was one of eight juvenile spider monkeys in the community, and because spider monkey subgroups are often small to reduce foraging competition, his opportunities to play with other young spider monkeys were often limited. Yet on the occasions that he and his mother were foraging in the same trees as capuchin monkeys, Tristan would set about finding new playmates.

Like my Benny, Tristan would eagerly rush up to older capuchins who had no interest in the childish antics of a young spider monkey, often to be chased out of the tree by the grumpy adult male capuchins he approached. Despite these aggressive encounters, Tristan’s desire to engage capuchins seemed undiminished. The monkeys would scramble around up and down branches, alternately chasing and wrestling. Tristan would use his prehensile tail to anchor himself to a branch, leaving his arms and legs free to wrestle. As the monkeys wrestled, they would make raspy play-grunts that sounded like a cross between a growl and a squeal. Then one would break free and dash away, in a game of three-dimension chase through the treetops. When I returned home and analyzed my data, a couple of patterns emerged. First, all the aggression that the juvenile male spider monkeys received was from capuchins, and some of those encounters were driven by Tristan eagerly running up to the adult males. Second, most of Tristan’s playtime—over 70 percent―involved playing with capuchin monkeys.

Both Benny and Tristan’s desire to play, despite the risks of aggression, reflects the deep evolutionary history of play among mammals. For juveniles, play is a rite of passage, one that teaches them important skills and helps develop their muscles, brains, and physiology. Play is rewarding, activating the brain’s dopamine responses. It also helps to develop a healthy stress response. The uncertainty and excitement of play provides opportunities for experiencing and tackling risks in what is typically a low-stakes context. That experience prepares animals for taking on with bigger risks later in their lives.

Play also teaches some key social skills. The wrestling and chasing typical of mammalian play can help develop fighting skills. But play involves taking turns, and correctly reading social signals. Obviously, Benny and Tristan both struggled with reading some of those important social signals, but that’s precisely why play can be so crucial in cultivating an ability to apprehend conspecifics’ facial expressions and bodily postures, and thus essential in refining social cognition. Play requires learning to read when a conspecific is interested in playing or not. It requires learning how and when to hold back, to inhibit behaviors that might be unwanted and unwelcomed by one’s social companions. Through play, animals learn that they need to take turns in being the chaser and the chased. They learn when they can put their full energy and might into playing, and when they need to hold back and take it easy to avoid overpowering smaller or weaker playmates. They learn the difference between a delicate play bite and a hard nip that will send their playmate running away. Researchers have studied how older and larger dogs and primates learn to play gently to make play equitable and enjoyable for younger, smaller, or more fearful playmates. While younger individuals might not understand these rules, they soon learn that when they get too rough, they will end up losing playmates.

This is important for many mammals, but it is especially important for primates. Primates’ extended period of juvenility provides extra time to learn the skills that are crucial for successful adult social relationships. The theories for this lengthy juvenile period often focus on ecology—particularly the need to develop foraging skills—but social skills are also imperative, particularly for group-living primates whose social rank and reproductive opportunities depend on social finesse. That means that relative to many other mammals, play remains an essential component of development for far longer, and often continues into adolescence and adulthood.

Tristan likely spent so much time playing with capuchins because of the social opportunities shaped by their respective species’ foraging patterns. Spider monkeys live in communities with a high degree of fission-fusion dynamics, where members are often off foraging in small subgroups containing just two or three individuals. This allows them to reduce foraging competition when resources are scarce, and they will come together in larger subgroups when resources are abundant. Mothers of infants and juveniles sometimes will travel together in “nursery” parties, in which multiple mothers can provide additional lookouts for danger and offspring have opportunities to socialize. But mothers will often go off and forage alone with their offspring when valuable ripe fruit is scarce. And during these periods, play opportunities may be limited. In a single spider monkey community’s range, there are often multiple capuchin and howler monkey groups, and they may forage in the same trees or occasionally even travel with a few spider monkeys in tow. Capuchin and howler groups are typically more cohesive, which allows more social opportunities for their offspring. While a young capuchin monkey will always have playmates nearby, young spider monkeys are not so lucky—hence Tristan’s eagerness to play with capuchins once he had learned that the juvenile capuchins were willing playmates.

A brown spider monkey hangs by its tail from a tree branch with one hand outstretched toward a white and black capuchin monkey that is perched farther down on the same branch. Around and behind them, the trees and greenery of a forest.
Credit: Charon Henning © 2022 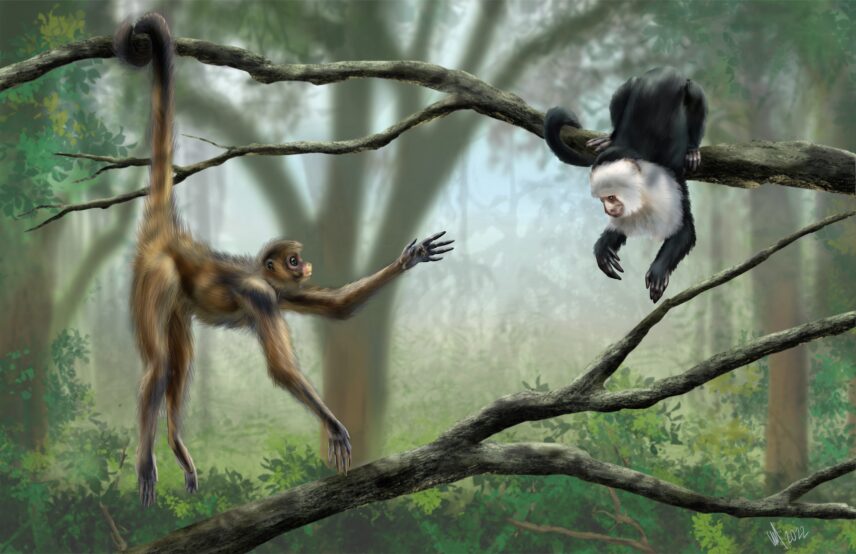 These social and ecological dynamics also shape the occurrence of adult play in primates. Neuroscientists Sergio Pellis and Andrew Iwaniuk suggest adult-adult play is less common in mammals relative to juvenile play. While it certainly does occur, and adult-juvenile play may be more common, there are only a handful of primates that engage in high levels of play among adults. These species include spider monkeys, chimpanzees, and bonobos—as well as humans. What all these primates have in common is a high level of fission-fusion dynamics: adult life is punctuated by the pressures of going stretches of time without seeing some conspecifics, and then being reunited after time apart. These fusion events, or reunions, between subgroups provide a sense of uncertainty—as individuals do not know what social events might have transpired between conspecifics they have not seen for days or even weeks—and provide a heightened risk of aggression. Play and ritualized greeting behaviors such as embraces may help mitigate such tensions.

These tensions can be present in captive primates as well, particularly when zoos manage their groups to mimic wild social organization. For bonobos at the Columbus Zoo in Ohio, that means that every few days, they get to choose which subgroup they spend time with as they rotate through enclosures on- and off-exhibit.

This summer, with a student, I analyzed social networks of captive bonobos to understand these social dynamics. When adults play, most of their playtime is engaged with infants and juveniles, especially offspring. But when it comes to adult-adult play networks, there is a lot of variation. Some pairs never played with each other, yet others engaged in more frequent play, particularly subadults Gilda and Gander, who retain the most youthful exuberance for play. When the bonobos played, they would chase each other up and down the outdoor climbing equipment or the playground of their indoor enclosure. Chasing would give way to joyful wrestling, accompanied by play-grunts that resemble breathless laughter. Some of the older individuals, such as the elder bonobos Jimmy and Lady, were partial to adding jaunty twirls, or spinning on the playground equipment. Sometimes, the play would segue seamlessly into other affiliative behaviors, such as grooming or genito-genital rubbing.

This playful spirit in adulthood may be related to managing the heightened tensions of fission-fusion dynamics. But the prevalence of adult playfulness may also be driven to by a pattern referred to as self-domestication or selection for friendly, socially flexible behaviors. The term is derived from research on domestication in dogs and foxes, where selection for less aggression and sociability results in more neotenous, or “baby-like,” appearance and behaviors. For primates like bonobos, this process results in greater propensity for lifelong learning and social flexibility. Since play is one of those behaviors that helps infants and juveniles learn social skills and manage their emotions, it makes sense that lifelong learning and flexible social systems go hand in hand with playful behaviors that occur throughout life. This “childlike” playful behavior has clear parallels to the extended, lifelong learning we see in humans.

Benny is a bit older now, and he has become a bit wiser and warier. He no longer bounds up to every dog he sees. Instead, he has become a lot more selective in who he plays with and reacts to some dogs with careful suspicion. But he will still drag me over to his canine friends with his same level of boundless enthusiasm. As I watched him play with his friends at the park this weekend, I considered the changes I have seen over the past year. He is no longer the playful juvenile that reminded me so much of Tristan, the juvenile spider monkey. Instead, he’s becoming a cautious, mature adult. But he still loves playing with his doggy friends, and we still have our doggy-human play bouts. This is likely to continue his entire life. At the park, we briefly saw one of his elderly friends, an aging German shepherd who’s now unsteady on her back legs, attempt to chase a ball. It seemed the youthful vigor of the other dogs got her playful spirits going again, and she tried to play for a few moments here and there despite her shaking rear legs. Just like older humans, older dogs retain that sense of playful joy. Maybe that is why both old dogs and old primates can still learn new tricks. Play keeps our brains young and allows us to be lifelong learners. From the youthful play that teaches social skills and emotional regulation to the adult play that manages uncertainty and marks the celebration of reunions, play keeps us on our toes and ready to engage in new challenges.

Illustrator bio: Charon Henning is a visual science communicator and fine artist, working in both traditional and digital media. She completed her Scientific Illustration Distance Program internship at the Raymond M. Alf Museum of Paleontology in Claremont, California, and is a National Geographic certified educator. Since 2015, Charon has served as art director for Katie Hinde’s March Mammal Madness tournament. www.charonhenning.com

Michelle A. Rodrigues is an assistant professor of biological anthropology in the Department of Social and Cultural Sciences at Marquette University, Milwaukee, Wisconsin. Her research focuses on the evolution of female social relationships, stress biology, and human-primate interactions.